The Whale Trail in De Hoop Nature Reserve is one of the country’s most popular. Like the beautiful Otter Trail on the Garden Route, the Whale Trail is considered among South Africa’s premier multi-day hiking routes.

The paradise of Noetsie, the coastal cove where hikers spend the third night of the Whale Trail.

The Whale Trail in De Hoop Nature Reserve is one of the country’s most popular. Like the beautiful Otter Trail on the Garden Route, the Whale Trail is considered among South Africa’s premier multi-day hiking routes.

In recent years, it has become increasingly difficult to get a booking, simply because it’s so popular. I feel like I should have walked the Whale Trail already, but I haven’t! Somehow it’s curvaceous coastlines and azure waters have eluded me!

I’ve often felt that no matter how much I travel around South Africa’s beautiful landscapes, there is always something new to explore.  So when CapeNature offered me the opportunity to photograph some of the refurbished huts, I obviously said “yes!”

On a recent Sunday I met some good folks from CapeNature head office (Lwazi and Millie) as well as hiking expert Tim Lundy and his friend Sanet at Potberg Hut, which is the start of the trail, and, maybe surprisingly, without any view of the ocean.

De Hoop is very much known for its coastline, including a marine protected area that has done much to conserve a variety of line fish species – and provide a safe nursery to southern right whales which come here in spring time to loll about in the warm waters.

But De Hoop offers much more than just coastline. Inland is the Potberg mountains, rising a few hundred metres above the coast. Here there is a splendid array of fynbos species, as well as superlative views north over the farmlands of the Overberg, and south over the fynbos towards the coast.

Potberg Hut is the start of the trail, and where hikers spend their first night. The hut is not your typical hiking hut. In fact, none of the huts on the Whale Trail fit this description. At all the stop-overs, there are hot showers, flushing loos, a fully-equipped kitchen, braai area, fridge (what really!?) and comfortable mattresses on bunkbeds. CapeNature have made a good effort to refurbish the old huts, which apparently were looking a bit run-down in the past few years.

Because I was photographing the huts, and carrying plenty camera gear, we were not going to walk the whole trail. Instead, we used our 4x4s to drive between the huts on the gravel service roads. As we drove through the reserve between the huts, we stopped along the way to set up some photos of the team as if they were hiking.

We enjoyed an evening braai at Potberg, and the next morning we left to head to Cupidoskraal, another hut in the west of the reserve, on the way to the coast.

This is about 15km walk up and into the Potberg mountains for hikers doing the trail, but we drove to the top of the mountain via the 4×4 track which accesses the Vodacom cell phone tower. The drive up the mountain gives an excellent idea of the beauty of these mountains. This is an under-rated part of De Hoop, and should be explored by visitors! The fynbos was looking excellent, especially after the heavy winter rains of 2020. I was a little disappointed that I wasn’t walking this part of the trail in its entirety!

It took us about an hour to drive to the top on the rocky 4×4 track, where we took some photos of the beautiful views. It was noticeable how the farmfields to the north dominated the landscape, and to the south, the reserve was still in its natural state of fynbos.

There are, however, big tracts of De Hoop which are covered by alien invasive vegetation like rooikrans, port Jackson, gum trees and wattle, especially many of the river courses. So while CapeNature are no doubt doing everything they can to restore De Hoop to its pristine state, the alien vegetation is glaringly conspicuous.

We then descended via the 4×4 track again and headed on to the cottage at Cupidoskraal, where we spent the afternoon. This is a pretty white-washed cottage in a valley at the base of the mountains, and has a sheltered, cosy feeling.

A great option on the Whale Trail is to take advantage of the Slackpacking option, where your clothes and food are taken for you by vehicle from hut to hut. This means you only have to carry a daypack with some lunch while you’re walking. It also means that when you do the Whale Trail you can take some beers, wine and cold food items like meat and cheese, and enjoy good meals in the evenings (ie. not two-minute noodles and canned tuna!).

The next day we headed on to my favourite stop-over of all – Noetsie. This is one of the most spectacular locations in De Hoop. The A-frame huts sit above the shoreline, looking out over a rocky beach, through which a honey-coloured estuary flows. Across the rocky beach is a huge cave, of particular importance to archaeologists like Dr Chris Henshilwood.

So when you walk the Whale Trail, in many ways you are walking in the footsteps of the original modern humans, of your ancestors – in fact, of your own original family! There’s certainly an ancient, maybe eerie, feeling at Noetsie, similar to many of the other places I’ve visited around Southern Africa where early humans have lived for thousands of years.

For some reason, I found myself stepping a little more carefully and gently on the Earth as I walked…this was, of course, the landscape that gave birth to us humans, and permitted us to survive. How can one not be in awe of the human journey, and our unbreakable, imperative bonds with Mother Earth?

We walked from Noetsie for about 4 kilometres along the coast towards Stilgat, a series of beautiful, shallow rock pools, which make for great snorkeling and swimming. Tim and Millie didn’t want to brave the cold water, but Lwazi and Sanet were more than up for it. It was a perfect day for a swim I thought! I jumped into the rock pools, and then out and into the open ocean, where a southern-right whale was cruising past! Perhaps just a 100 metres or so…

There’s also a big cave at Stilgat, which we explored a little bit, but it is so big and lengthy that we didn’t venture too far in. Our torches weren’t powerful enough in the capacious darkness.

On the way back, walking across the beach at Noetsie, I spotted some fresh otter tracks…this must be otter heaven, with the fresh-water estuary, and a fully-stocked marine protected area offshore providing endless supplies of food!

That evening we had a braai in the Noetsie braai hokkie which stands in front of the huts. It really is a fantastic setting…and I wish I could come back and spend a few days at Noetsie to explore this coastline. Somehow this landscape feels very welcoming to me…without being able to put my finger on why. How much of it this landscape and ocean is encoded in our human DNA? As anatomically-modern humans we’ve been living here longer than any other place on earth. Maybe it just feels like home, right?

The next day we went straight to Hamerkop, a beautiful double-storey cottage set back in the vegetated dunes above the beach. This part of the trail has got the best stretch of beach, and would make for great swimming I’m sure. (Just watch those rip currents).

Like all the other coastal stop-overs on the Whale Trail, Hamerkop has superb views of course, and I would have liked to spend the night there, but because we knew a cold front was arriving the next day, we needed to get to the next hut at Vaalkrans.

From Hamerkop, we drove to Vaalkrans, which has another spectacular location, perched on cliffs above the ocean. There are several ocean blowholes near the cottage at Vaalkrans, so every now and then you hear the ocean sighing (or burping!) through these blowholes.

I was really impressed at how every one of the stopovers on the Whale Trail have their own atmosphere and feel. I also appreciated how Vaalkrans cottage is built for protection from the prevailing coastal wind.

The braai boma looks over a cove where the ocean crashes into the cliffs. As at the previous huts, I spent the night on my mattress outside, sleeping under the stars, listening to the ocean, staring at the cosmos above…I’m pretty sure that I heard a whale exhaling when there was a lull in the wind.

The next day we drove back out the Potberg gate and back into De Hoop at the main gate, to get to the end of the trail at Koppie Alleen, where a huge dune field meets the rocky shoreline and fynbos.

Here we walked down to the shoreline and took some photos looking out across the dunes. This is probably the most popular part of De Hoop, where day visitors come down to look at the whales offshore during springtime. But there were hardly any other people around, and we had the whole place to ourselves.

Even though we had driven most of the route, it felt like we had seen enough to convince us, that yes, this trail is one of the country’s most impressive. Next time, I want to walk all of it! 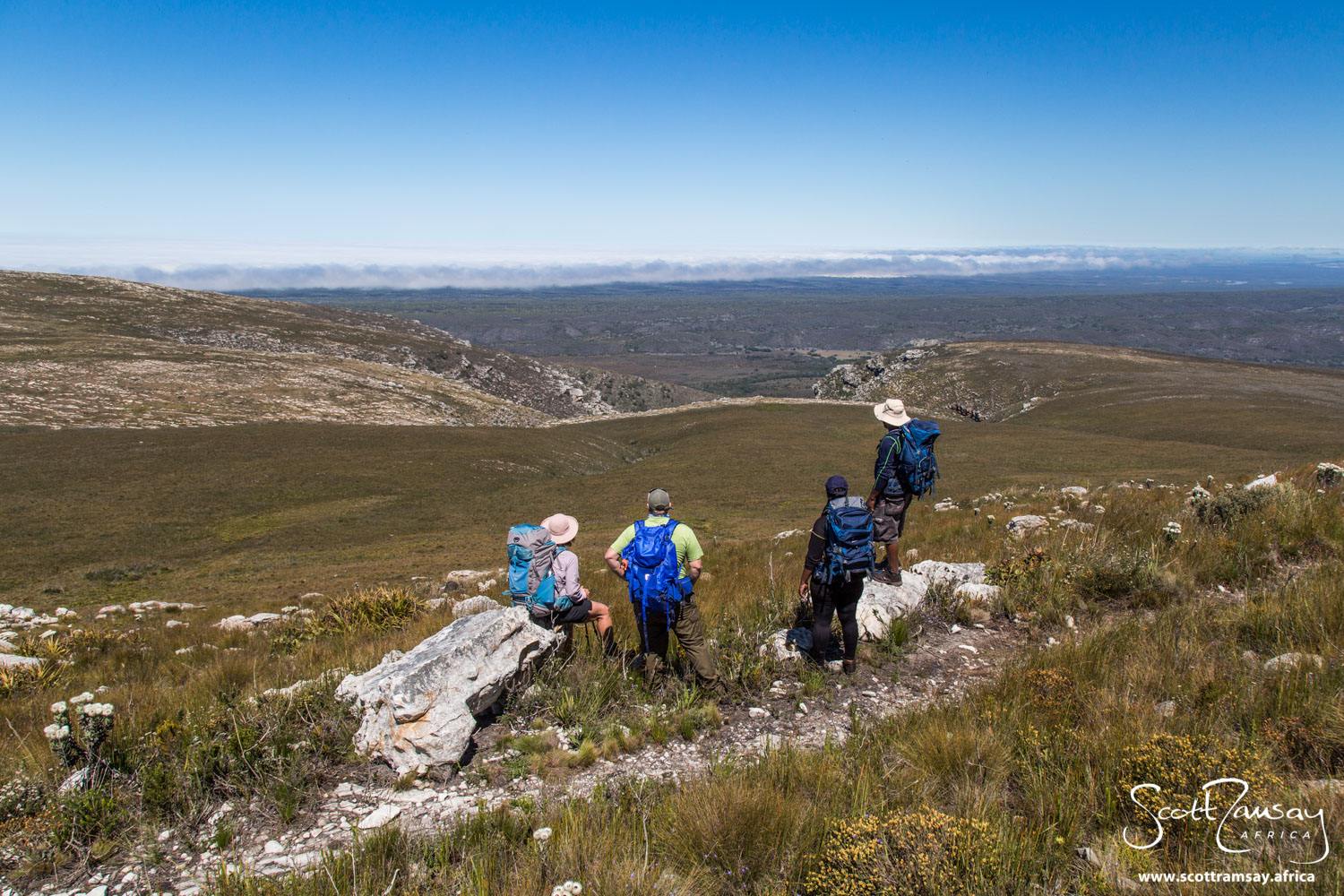 The Potberg mountains on the first two days of the Whale Trail. On the third day, hikers move south from the mountains towards the coastline. 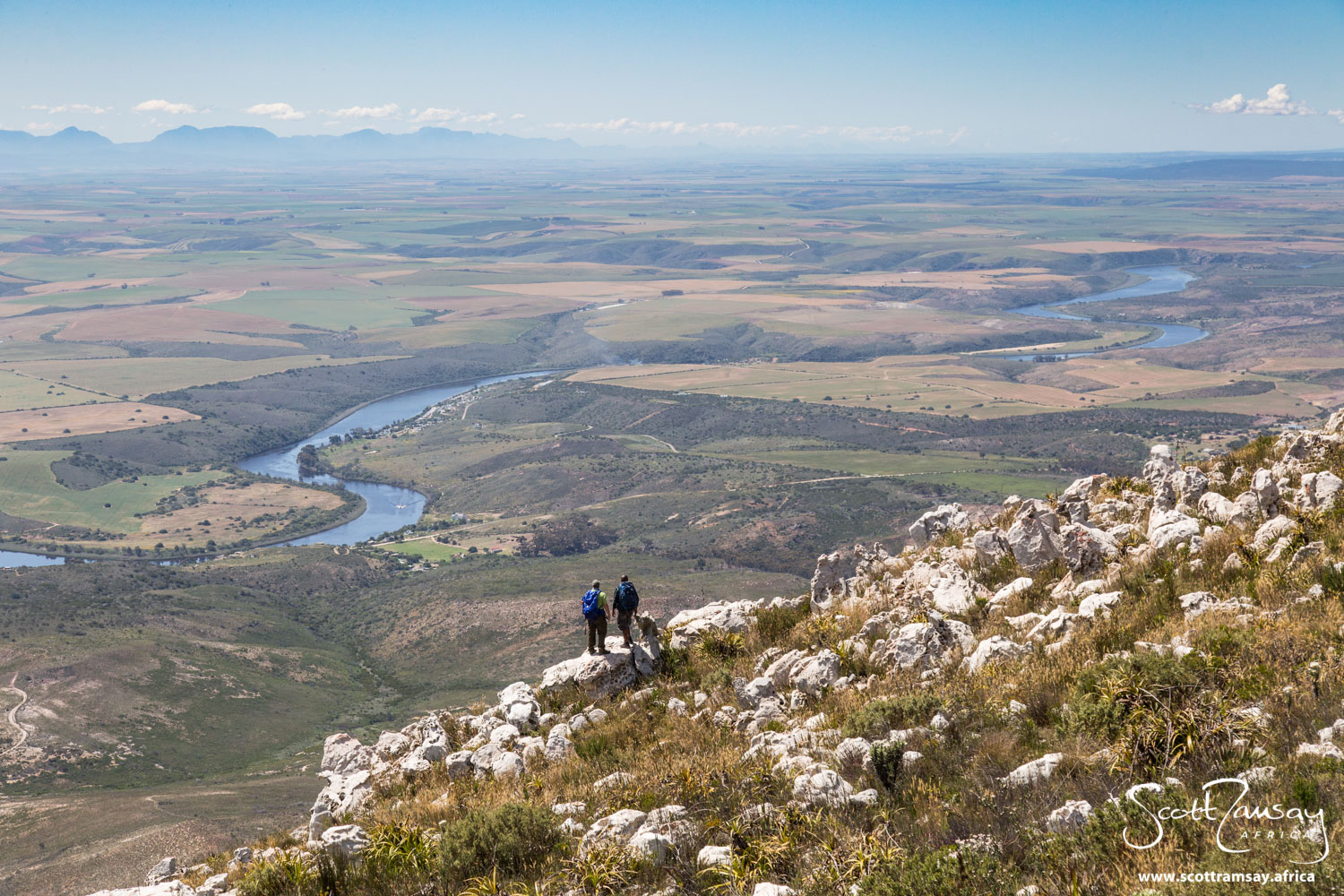 Looking out from the top of Potberg mountains ver the wheatfields of the Overberg near the southern tip of Africa. The Breede River below is full from a wet winter. 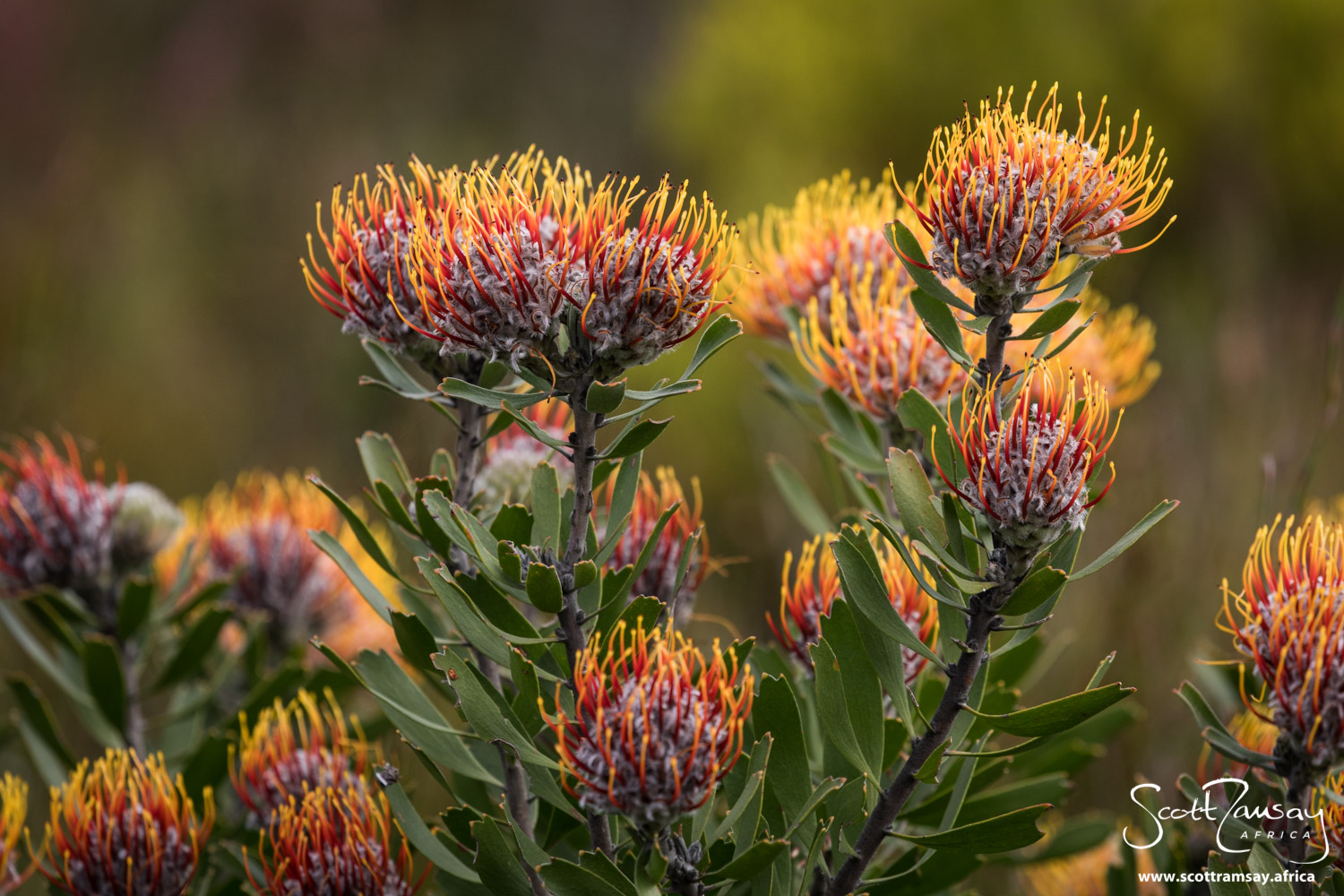 The huts at Noetsie are perfectly positioned overlooking the cove and estuary. One of the best overnight spots in any South African nature reserve. 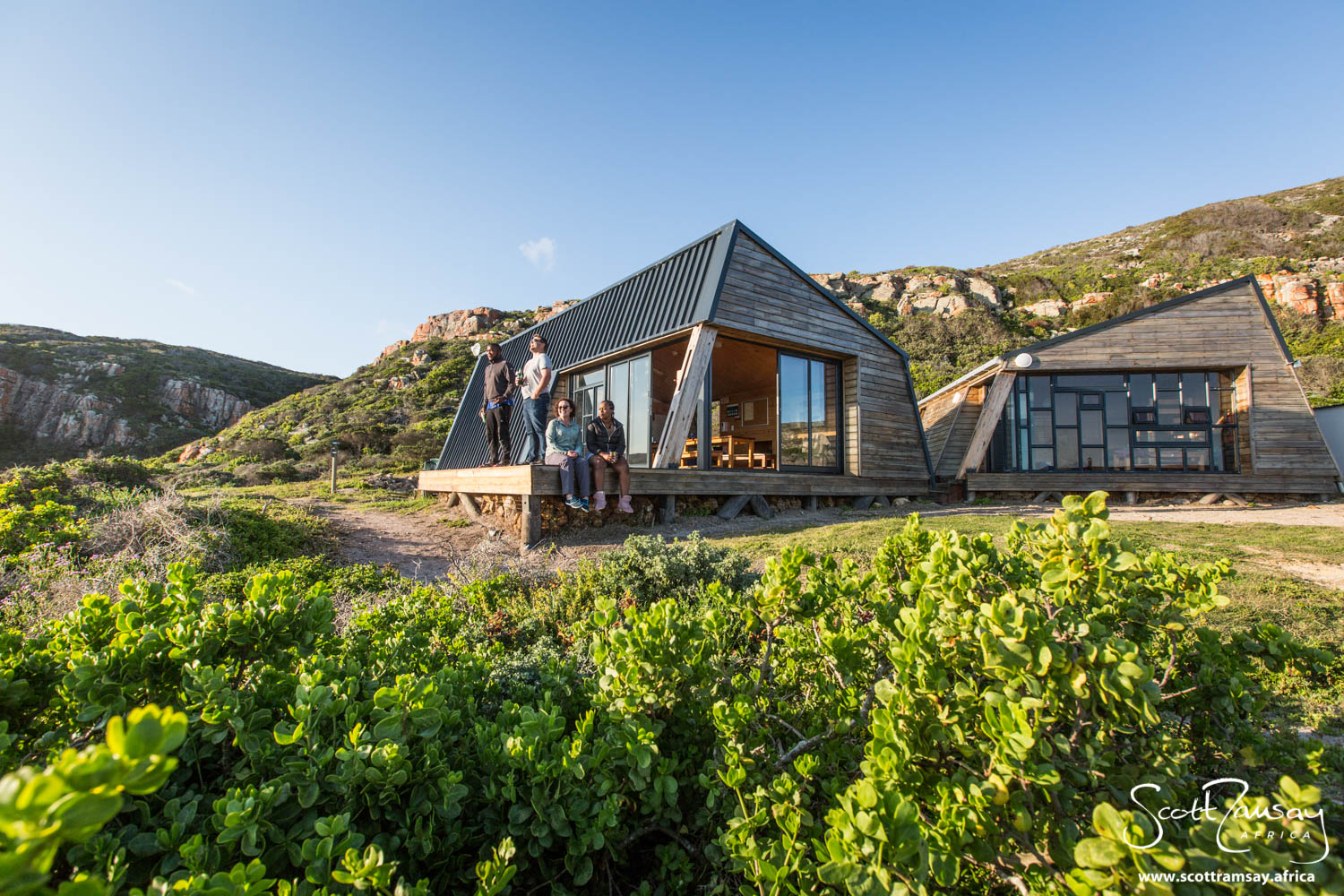 The huts at Noetsie in De Hoop. 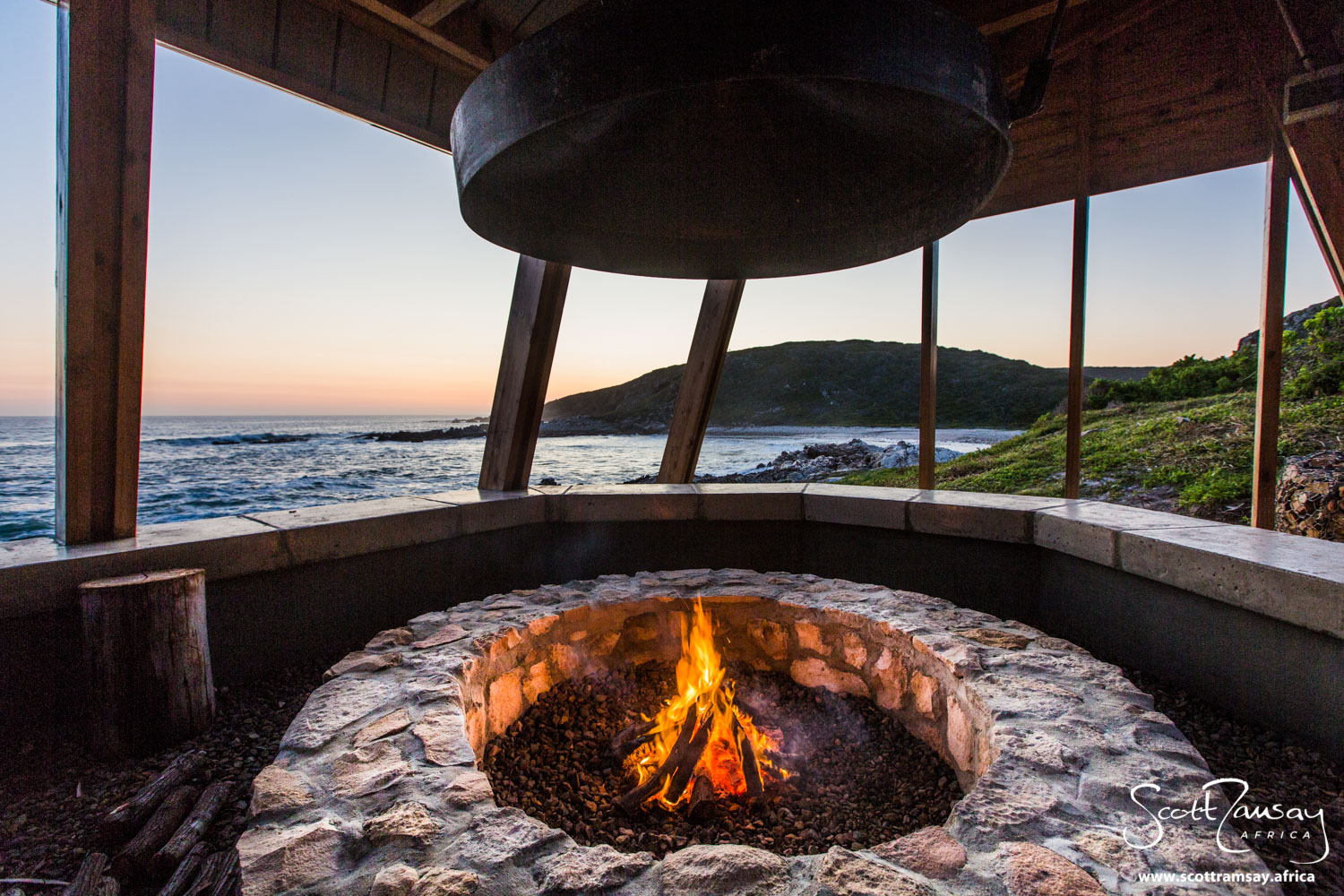 The braai area at Noetsie. What a spot! 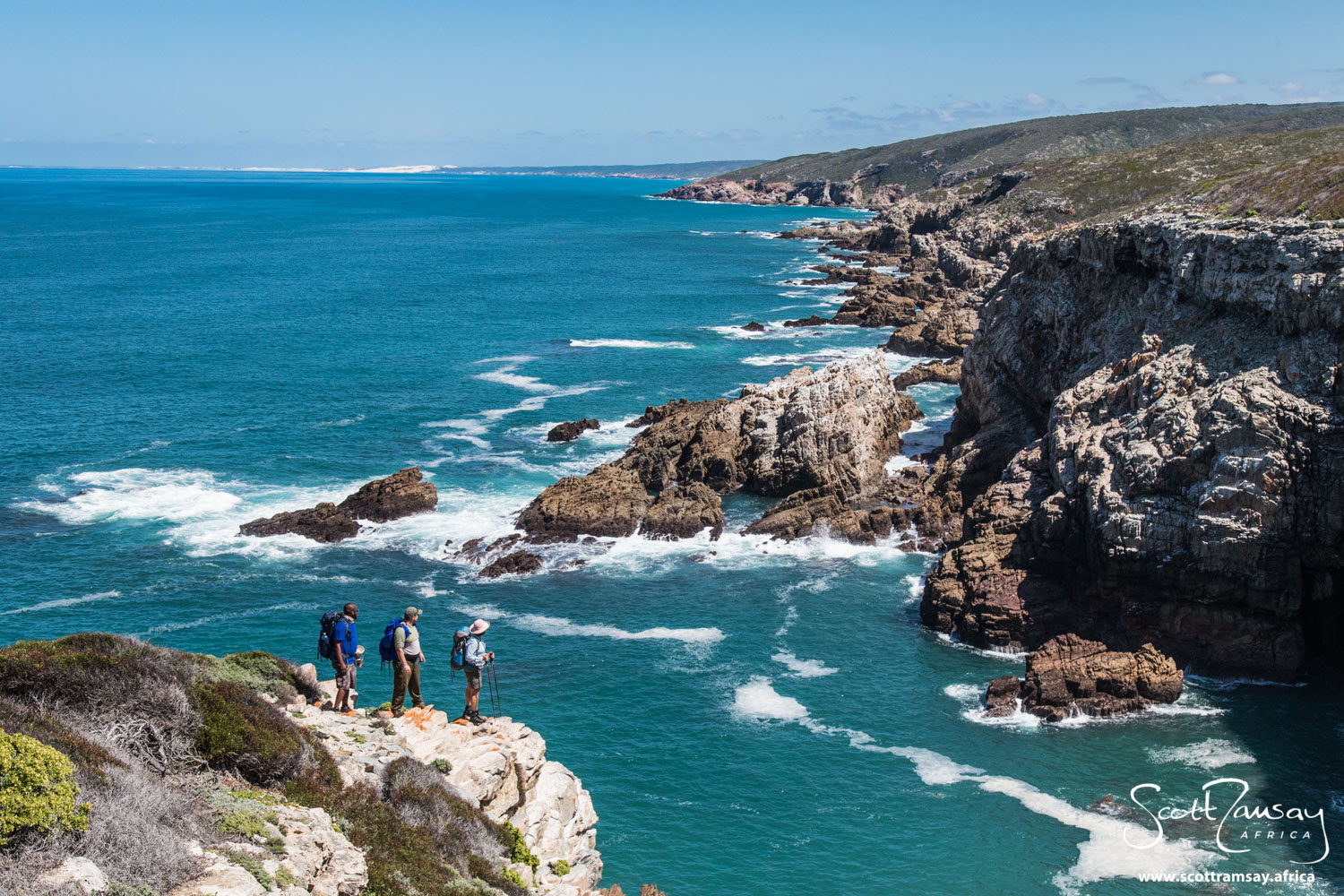 Walking the coastline, past some impressive coastal caves. The Klipdrift Shelter near Noetsie (not pictured) is one of the premier archaeological sites in Southern Africa, and the evidence collected suggests that early modern humankind survived on this coastline for the past 200 000 years. 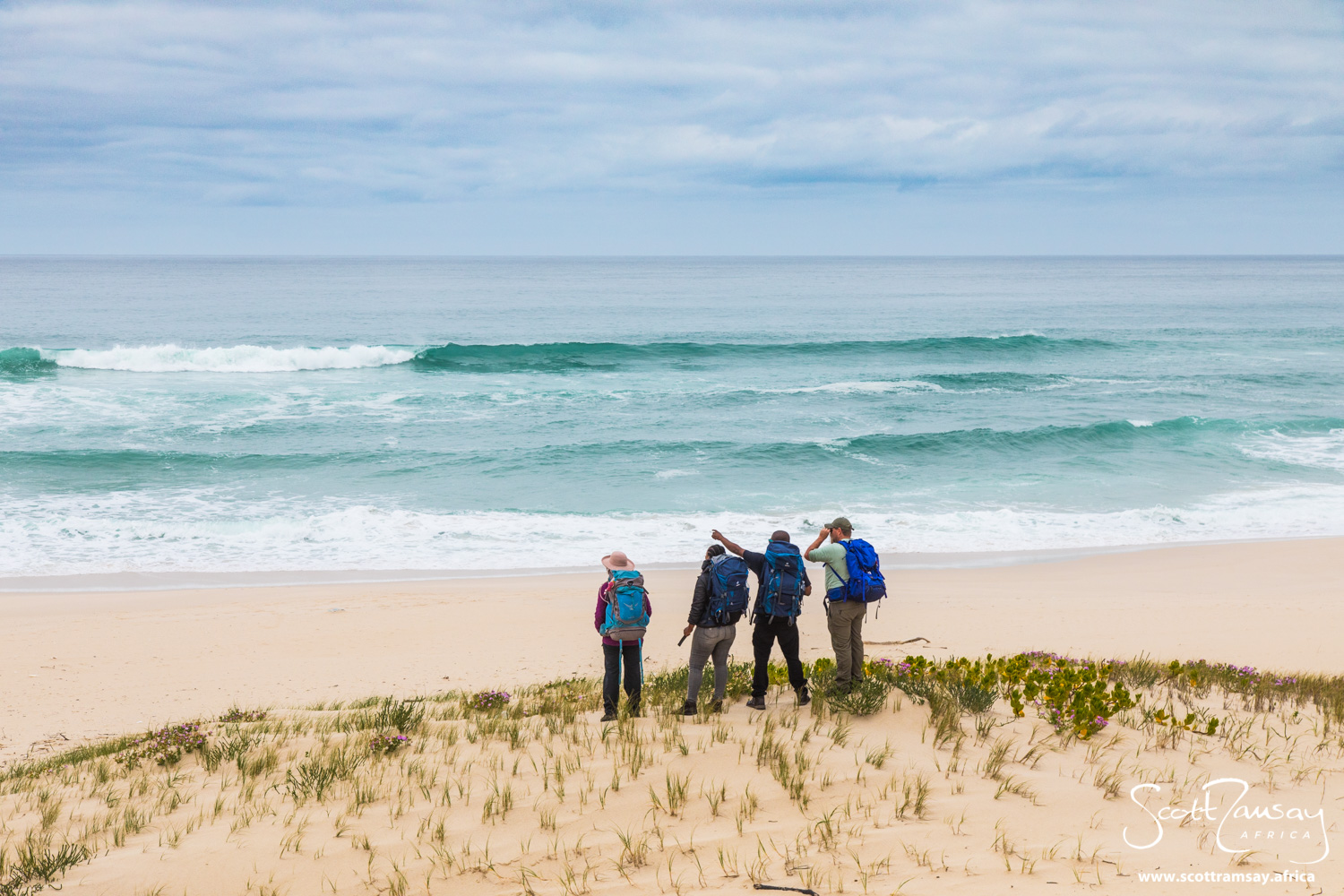 Looking out for whales near Hamerkop Hut.

The cosy cottage at Vaalkrans, the fifth and last stop-over on the Whale Trail 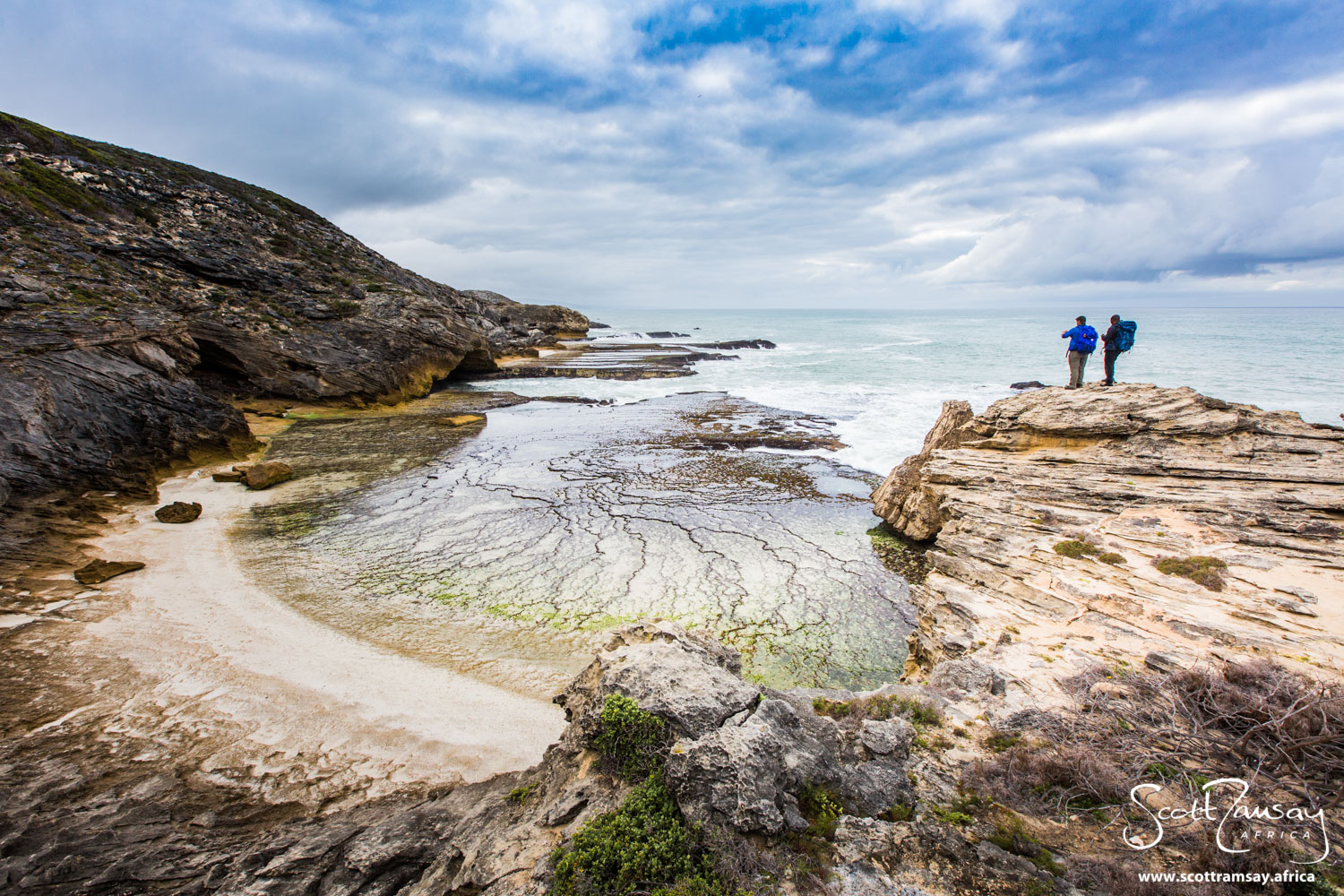 The coastline of De Hoop is varied and diverse. These limestone cliffs are near Vaalkrans Hut 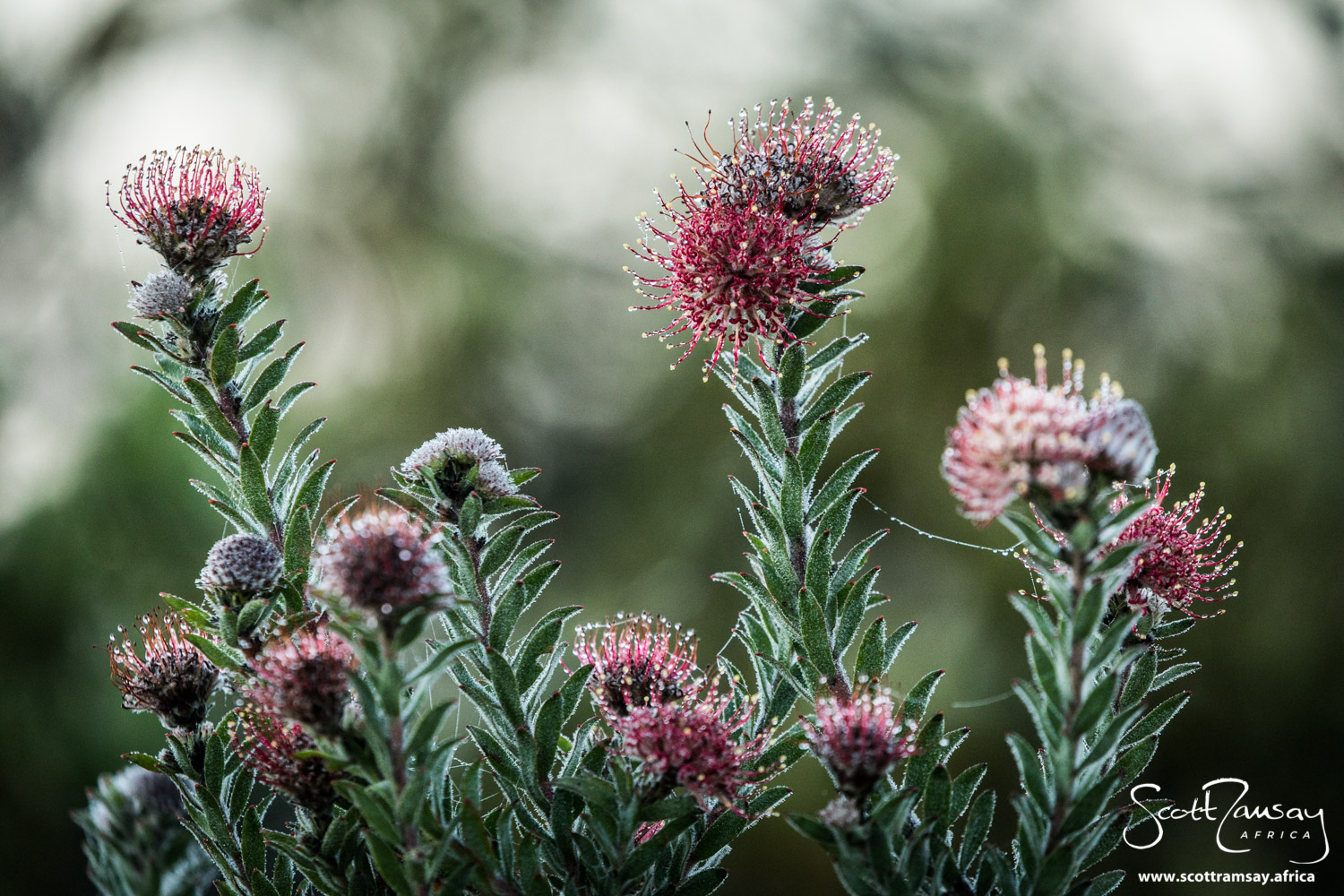 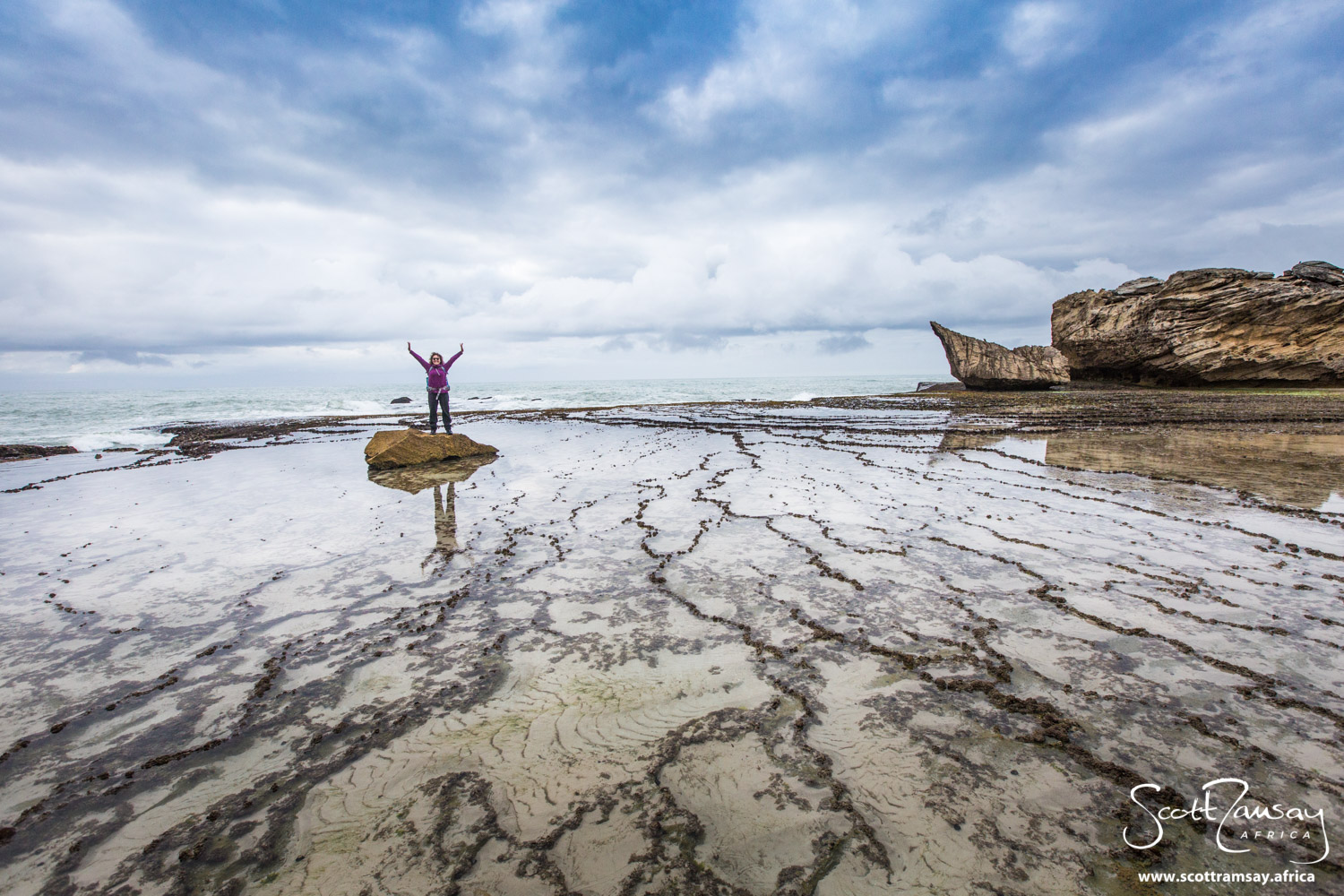 Yeehaaa! The sense of freedom that comes with immersion in a near-pristine natural environment like De Hoop.