At the end of Africa, almost at its most southern tip, is a tiny little reserve. If you dropped someone from overseas out of the sky at De Mond, they may think they’ve landed on a lonely stretch of English or French coastline. This postage stamp of a protected area – just 10 square kilometres - seems so very different to other typically African parks.

The estuary of the Heuningnes River, in De Mond Nature Reserve. The ocean is in the distance to the right of this photo.

There’s an endless beach, coastal dunes, crashing waves, a river estuary, and seagulls galore. Around the reserve is a vast plain with old farm houses here and there, their origins dating back to the earliest colonial times.

Where are you? Are we really in Africa?

There, do you see that Cape grysbok in the farm field? And that flock of blue cranes? And the black oystercatchers on the beach?

There’s the ericas and buchu and blombos, plants that form part of the huge fynbos family of plants, found only here at the southern tip of this wild continent.

Then there are the names: Bredasdorp, Vogelgezang, Waenhuiskraens, and most significantly, Cape Agulhas, the most southern tip of Africa.

Lying between De Hoop Nature Reserve to the East, and Cape Agulhas National Park to the west, De Mond’s main focus is the estuary of the Heuningnes River, a 19km-long waterway that connects the large inland lake of Soetendalsvlei to the Indian Ocean. The Heuningnes is the southern-most estuary in Africa, and this river and its surrounds is an important bird area for coastal and Cape birds. The estuary itself is a Ramsar site, designated in 1986.

The Overberg area is the stronghold for South Africa’s national bird, the blue crane, a regal species that sometimes gather in remarkably large flocks in the farm fields as they feed on left-over seeds.

De Mond is a well-known breeding site for birds like Caspian tern and Kittlitz Plover, while the reserve is one of only two protected breeding sites for the Damara tern.

Look out too for the uncommon Black Harrier, hovering like a helicopter over the vegetated dunes as it locks it’s predatory gaze on rodents and small birds. The unmistakable greater and lesser flamingoes breed in the salt pans of Agulhas National Park, and are often seen flying over De Mond.

When we arrived, the wide river mouth was closed to the ocean – a naturally occurring event when river levels drop during summer and  the pounding ocean builds a barrier against the mouth, depositing sand on the shore.

So the river was rooibos tea brown, and a pair of fish eagles were working the piscatorial section of the buffet. Ah fish eagles! Yes, you’re still in Africa.

Our visit was in the middle of winter, and the high rainfall had filled up the estuary, almost to breaching point.

Reserve manager Mark Johns told me that they were waiting for a bit more train to fill the estuary a bit more, before artificially opening the mouth with bulldozers to restore the natural tidal rhythms in the estuary.

Once the mouth opens, the ocean floods the estuary, turning it a turquoise blue, and provides an important nursery for fish species.

The 7kms Sterna Trail makes its way across the little bridge over the Hueningnes River, through the back end of the dunes, and onto the long, empy beach. It’s an easy amble, perfect for stopping often and checking out the birds, or photographing the fynbos flowers.

The dunes are the highest point in the reserve, but still only about 50 metres above sea level. Still, we stopped on top of one, and just soaked up the view. The beach here is empty of development or people – De Mond has one of the best walking beaches in the country, and although the ocean can be rough, there’s enough of a shallow gradient to make swimming relatively safe if you don’t get too far out.

The trail winds its way along the coast and back to the estuary mouth, and then along the river’s salt flats and marshes back to the bridge near the entrance gate.

There’s just one cottage in the reserve, a six-person sleeper in the middle of fynbos, set back from the river, but with a teeny view of the ocean in the distance.

When you stay at De Mond’s cottage, you’ll have the whole reserve to yourself at night. On a full moon night in summer, you can wander around in your own private Cape paradise…

When we arrived at our cottage, a Cape mongoose popped his head up in a nearby bush, and a committee of Cape spurfowl cackled hello.

The cottage is simply kitted out, but comfortable, with a great fireplace that warms up the whole lounge and dining area in winter. The braai area is protected from the wind with cleverly designed latte, and although it’s not the most atmospheric of locations, the cottage is one of the most peaceful I’ve stayed in. There is simply no-one else around.

The next day we visited the coastal caves at Waenhuiskraens, about a half hour drive away, near the little coastal village of Arniston. These caves and surrounds form part of De Mond’s protected area, even if they aren’t contiguous with it.

Arniston has always been a popular holiday spot. The little white fishing cottages are home to families of local fishermen who have worked this coastline for generations…perhaps hundreds of generations.

As elsewhere on the southern Cape coastline, strandlopers – or early modern humans – survived and thrived on the Agulhas Plain for thousands of years. You can understand why…there is plenty of shellfish in the rock pools, and ample supply of fish just offshore.

Even today, local fishermen still construct stone fish traps here, and at low tide come to collect whatever Poseidon has gifted them.

The walk down into the big cave is only possible at low tide, and fortunately we arrived at spring low on a beautiful day. The cave is huge, and makes a great spot to sit and have a cup of coffee from your flask. There are also ample photography opportunities, so take your camera and tripod!

After visiting the caves near Arniston, we drove to Cape Agulhas, and visited the southern-most tip of Africa, a cartographical meeting point of the Indian Ocean and Atlantic. Standing at the bottom of Africa, you’d expect a more dramatic landscape – maybe like Cape Point near Cape Town – but Cape Agulhas is a rather non-descript stretch of low-lying rocks.

Unfortunately, the town of Agulhas has been over-developed, and unlike Arniston, the houses don’t follow any particular traditional style. Still, it’s worth a visit, and the farm roads back to De Mond take you through some of the prettiest landscapes in the region.

De Mond makes a great base from which to explore the most southern parts of the Overberg, and yet still feel like you’re far away from the tourists who tend to flock to these better known spots. 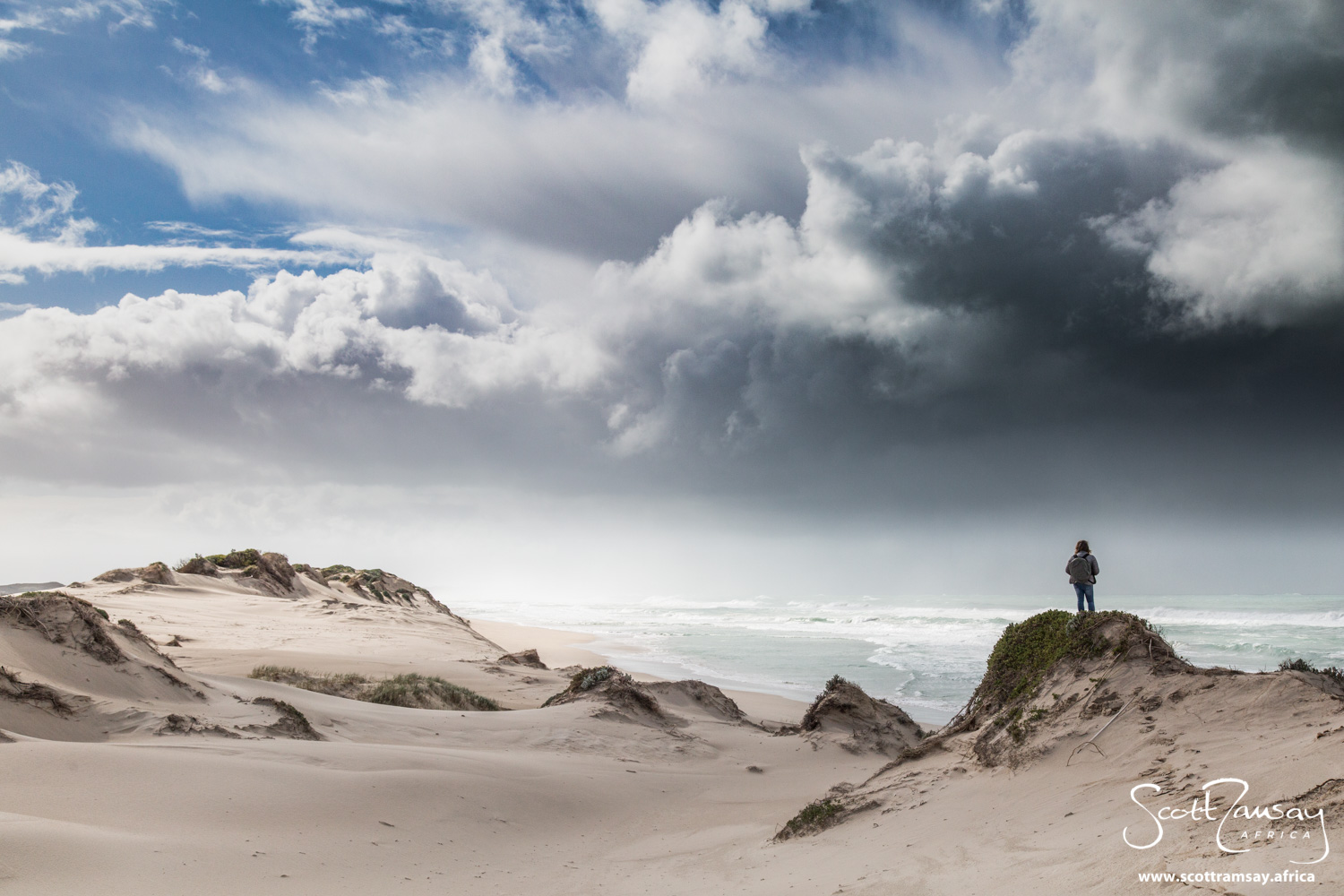 In recent years the extensive dune system and the pounding ocean has closed up the Heuningnes River mouth. Reduced upstream flows because of increased agricultural water use, means that the river is often closed off to the ocean. 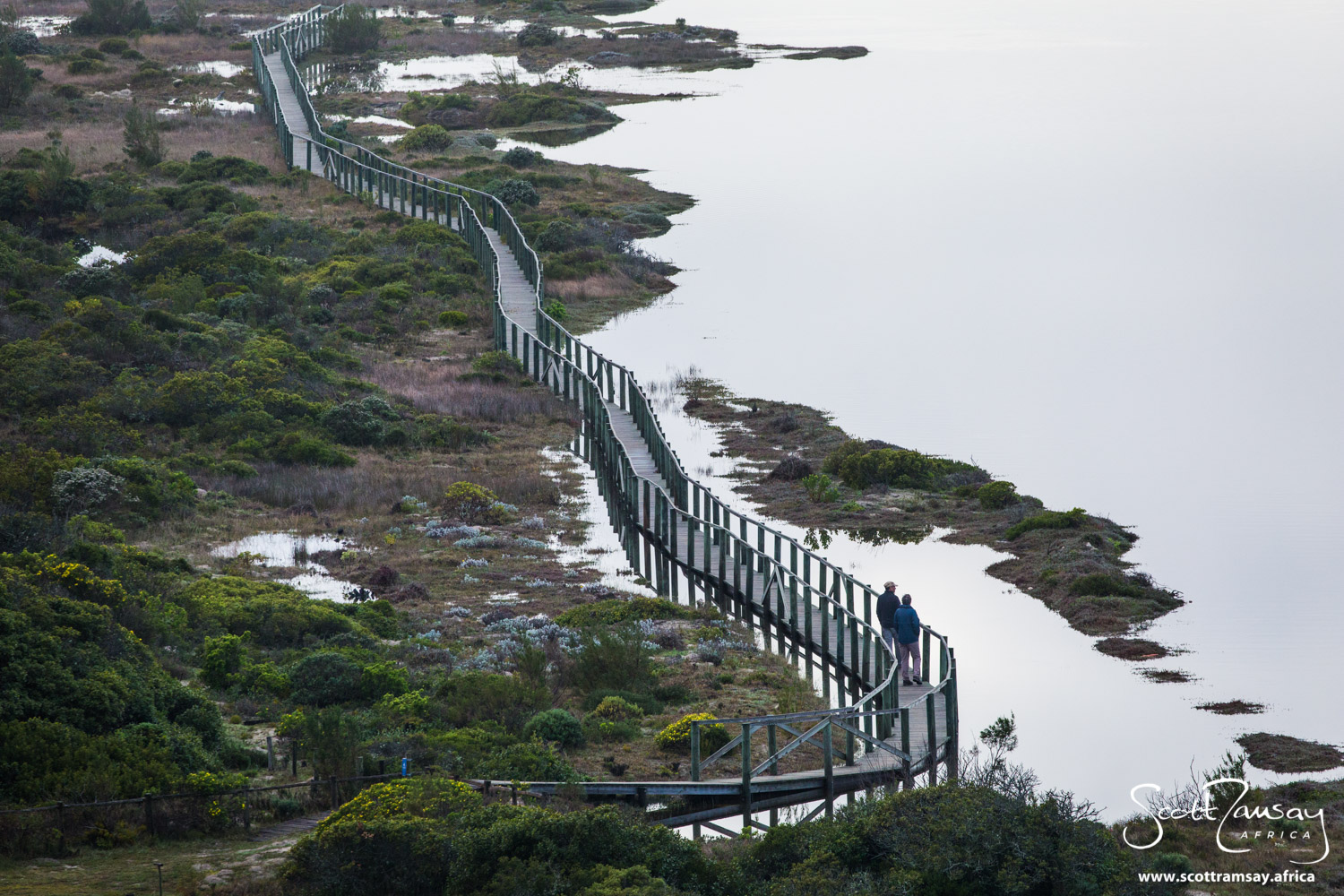 Boardwalks along the estuary make for great bird-watching. 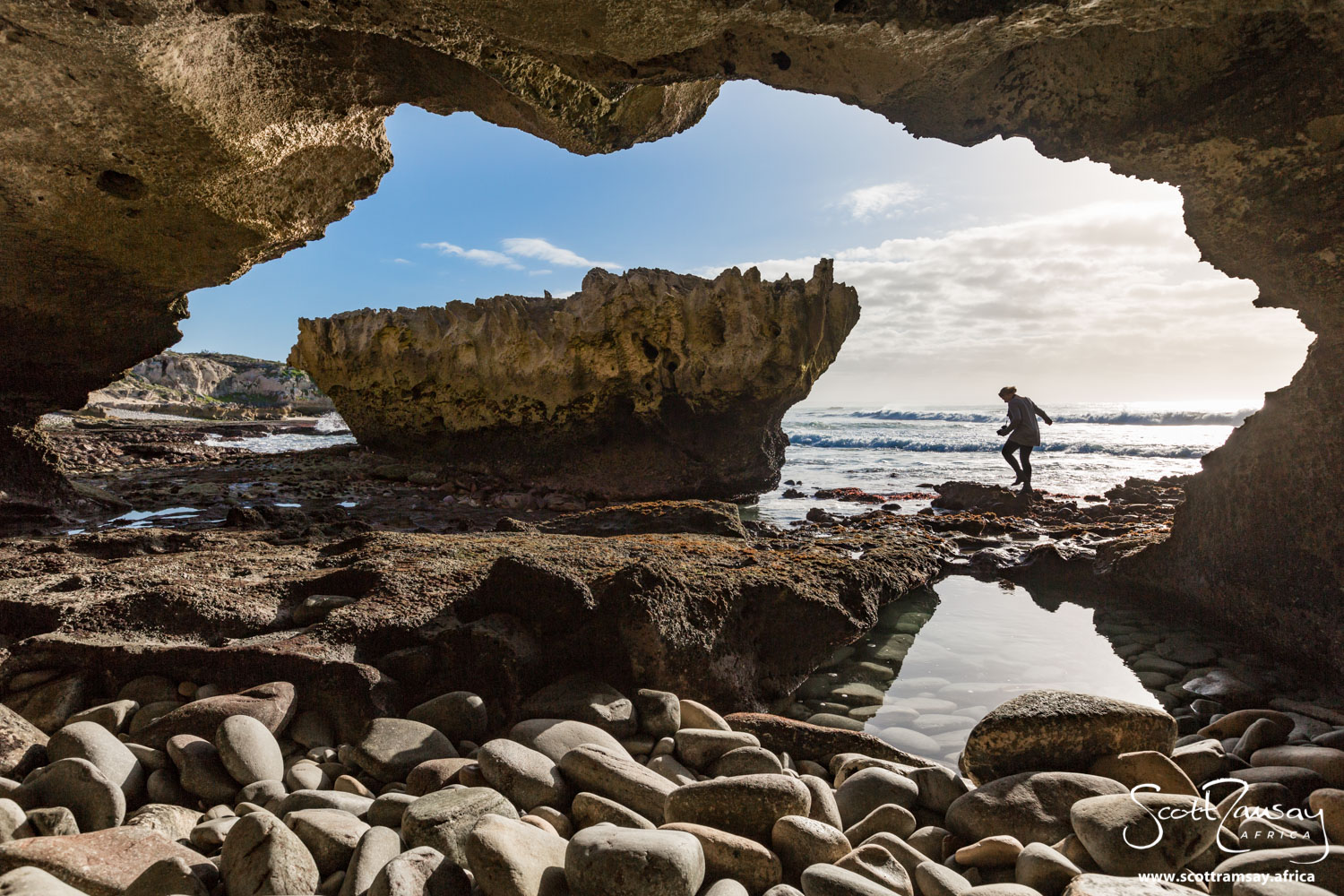 De Mond reserve has an extension east towards Arniston. Here the limestone has been eroded into an impressive cave, called Waenhuiskraens. 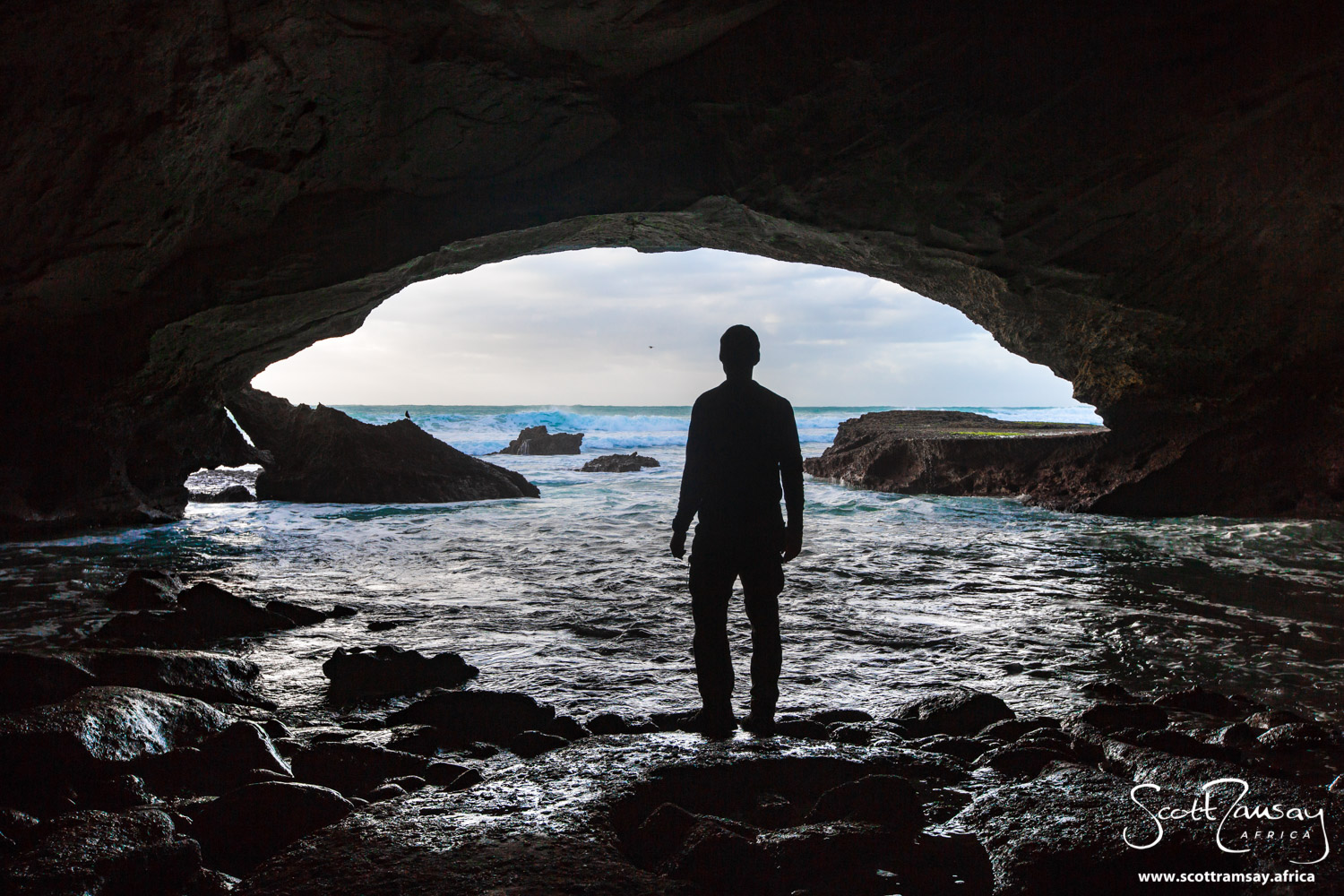 Standing in Waenhuiskraens, near Arniston. 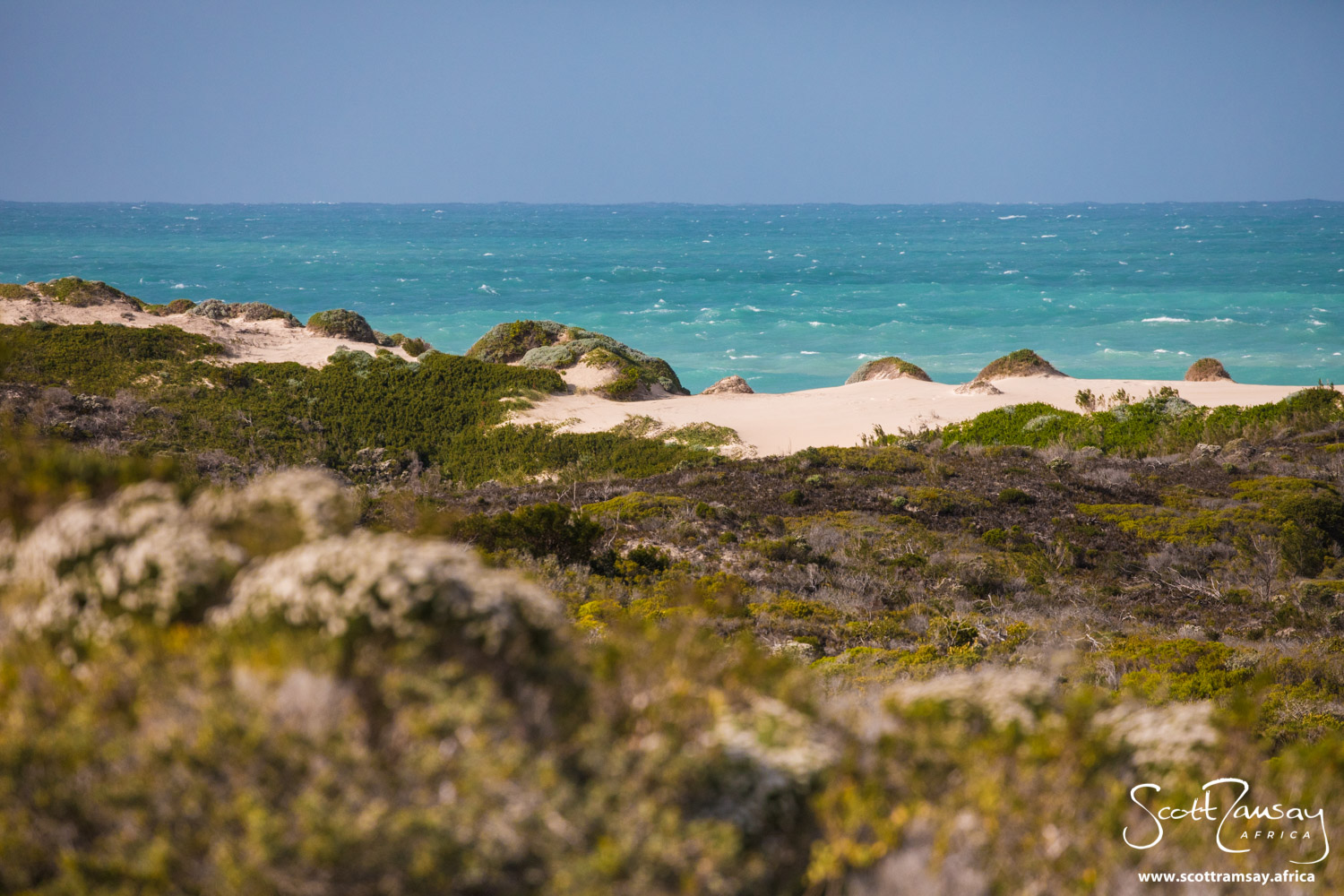 De Mond is a small reserve, but with a big feel. The Indian Ocean shoreline here is empty of development or holiday homes, so there's a real sense of freedom and seclusion. 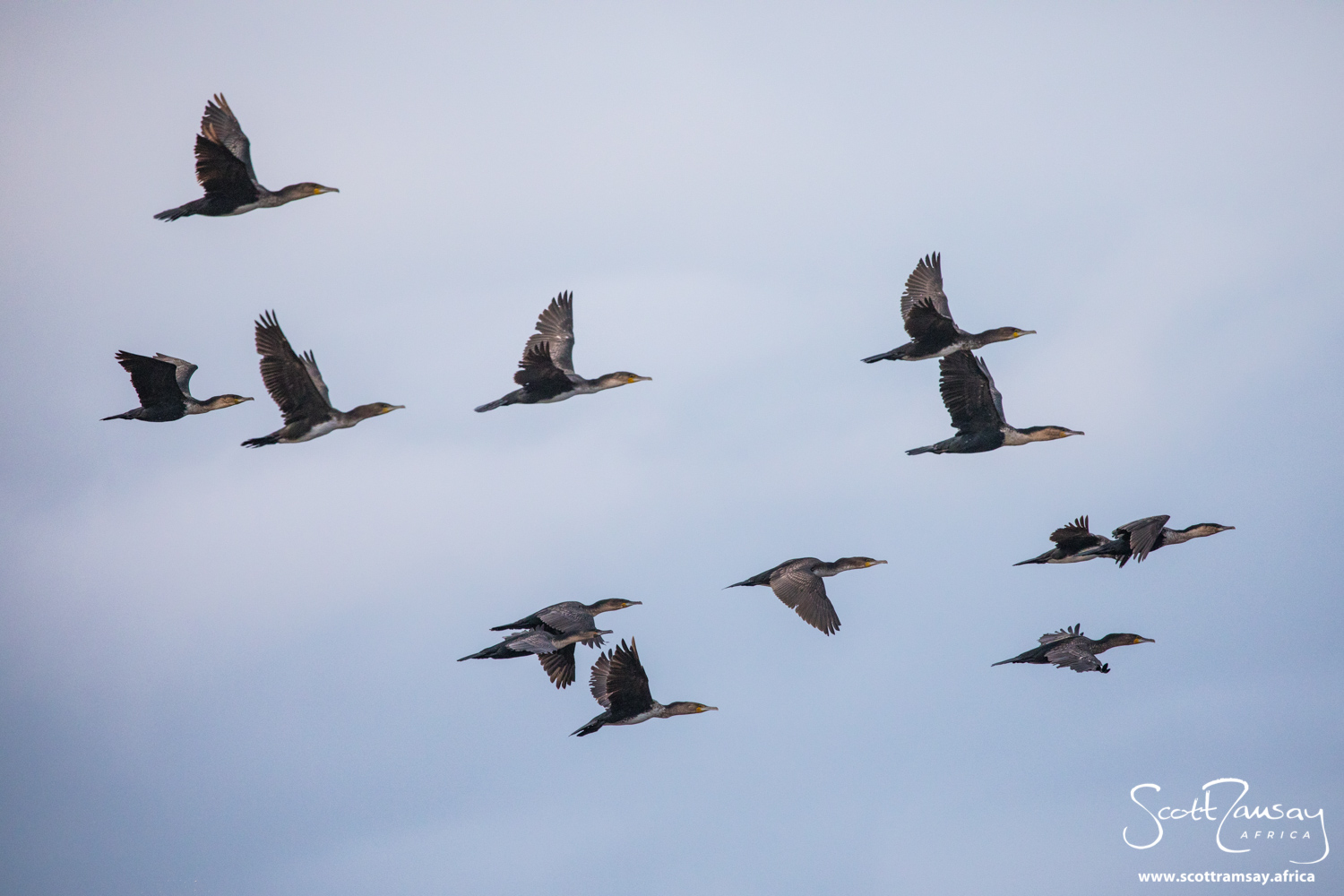 De Mond is well known for birding. Undisturbed coastline, a fresh water estuary and extensive dunes and fynbos create a haven for feathered species. Here a flock of white-breasted cormorants soar over the estuary. 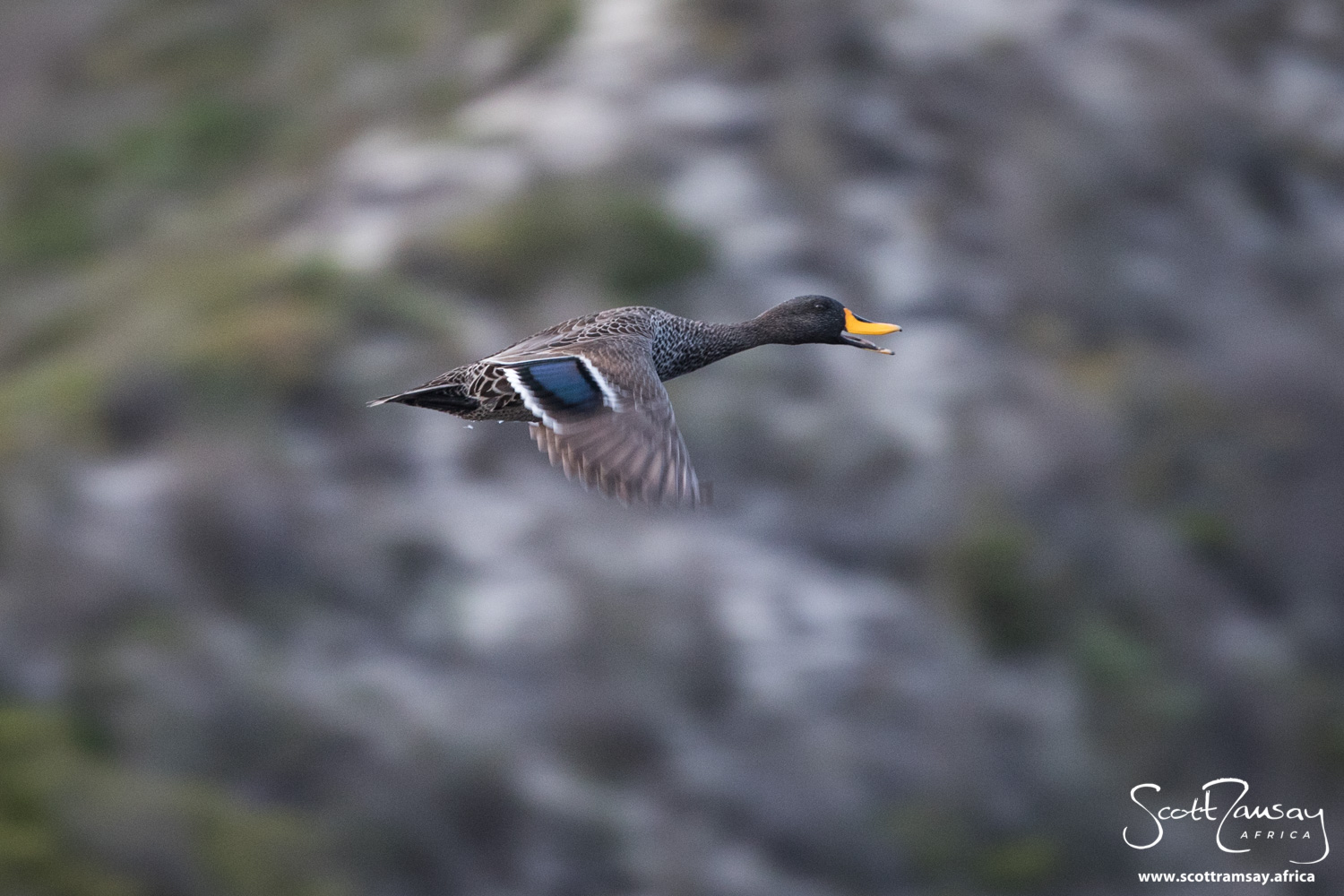 Yellow-billed duck catching up with its mate. 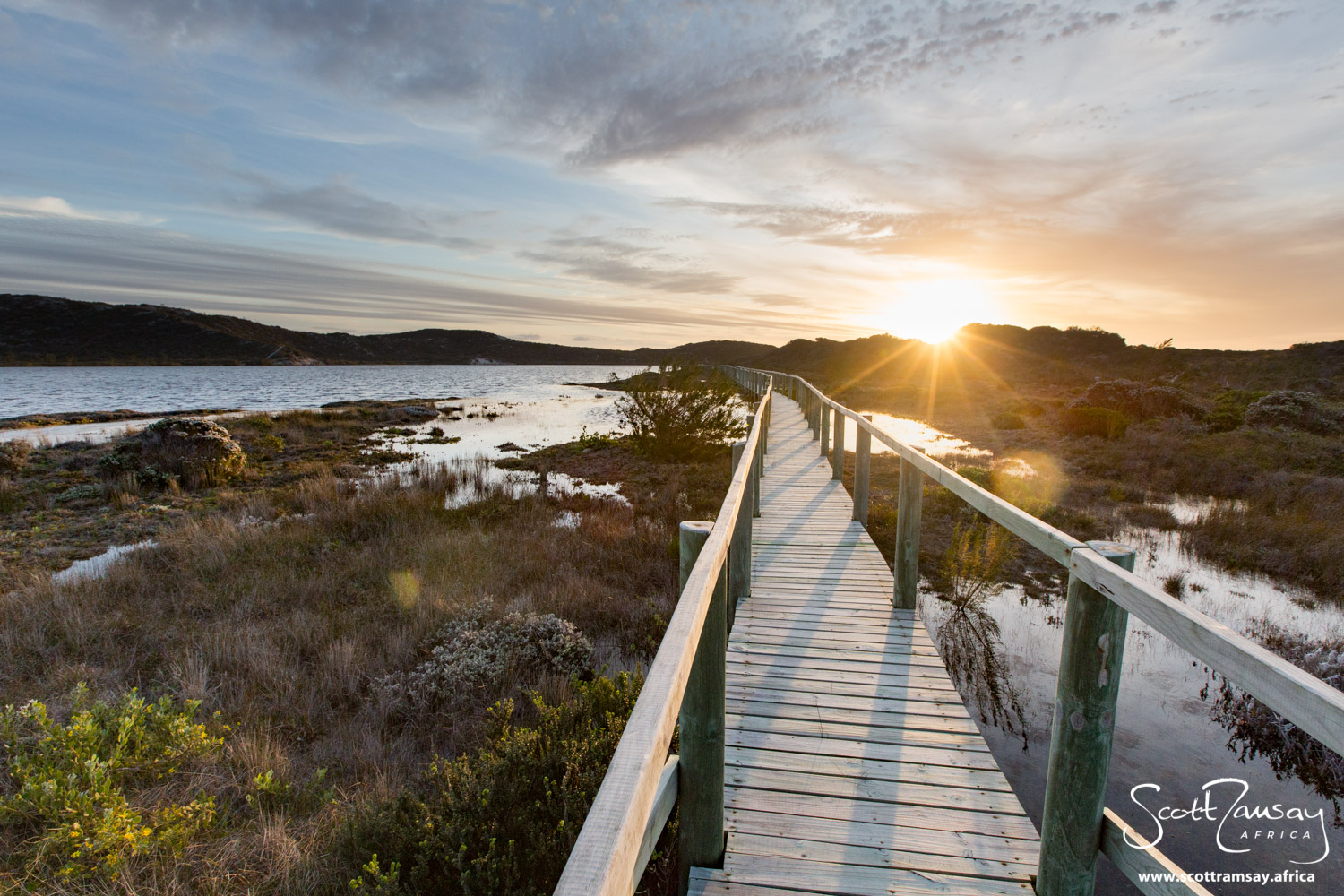 Sunset on the boardwalk 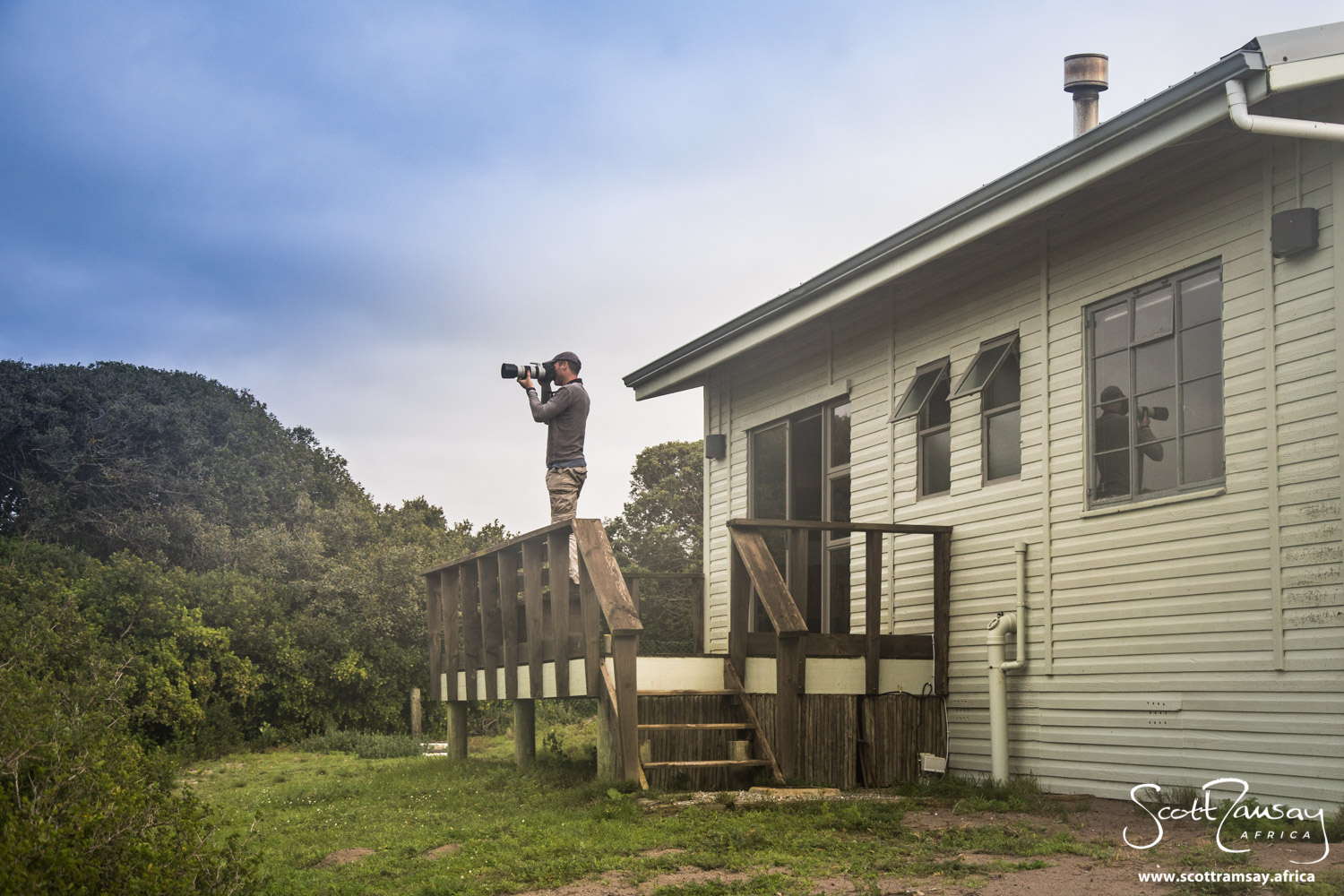 The cottage at De Mond is the only place to stay in the small reserve...and it feels great to have the whole place to oneself at night! It was pretty wet and cold when I was there, but I'd like to come back in summer time and spend the night walking the reserve. 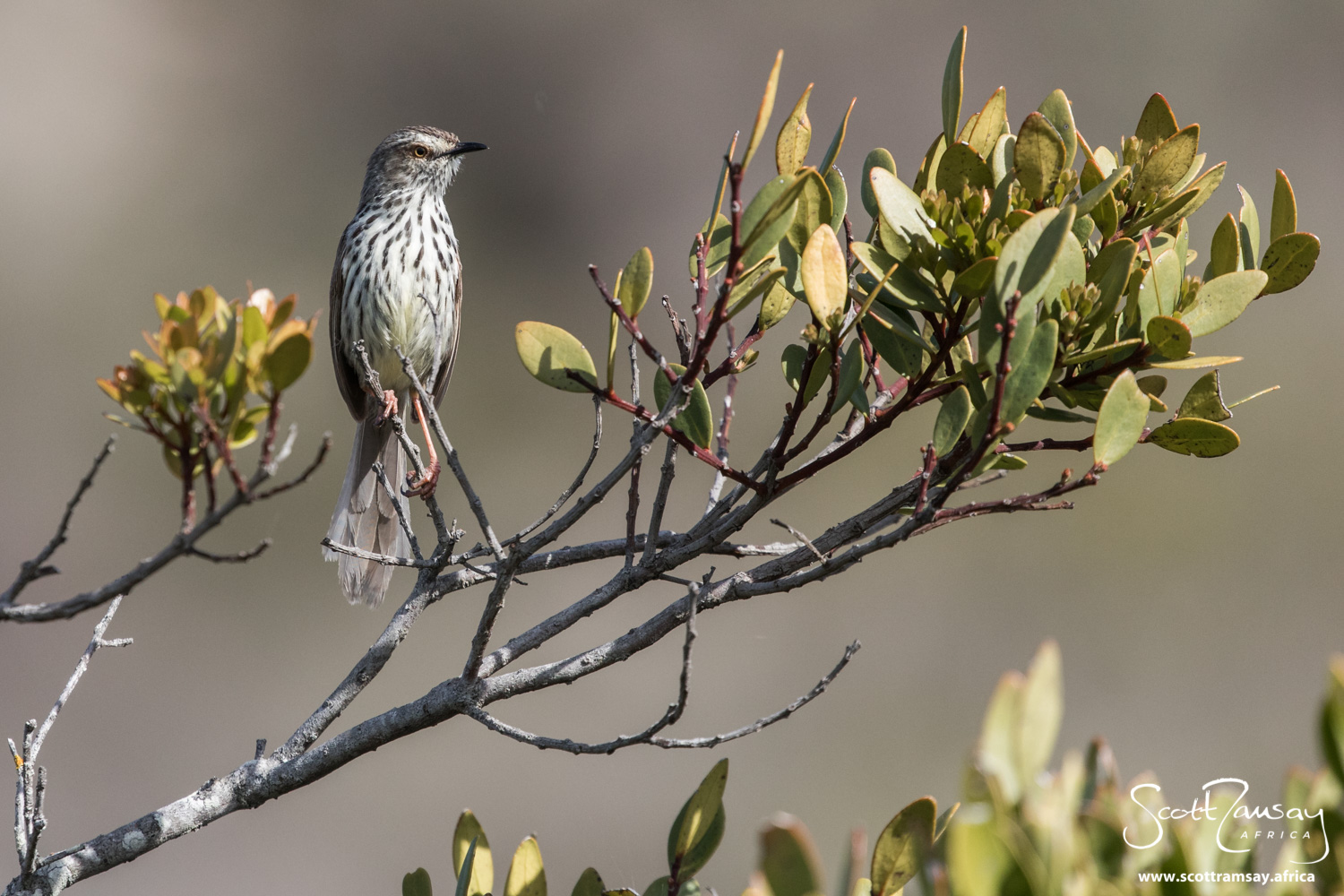 Karoo Prinia, catching some sun rays and perusing it's turf 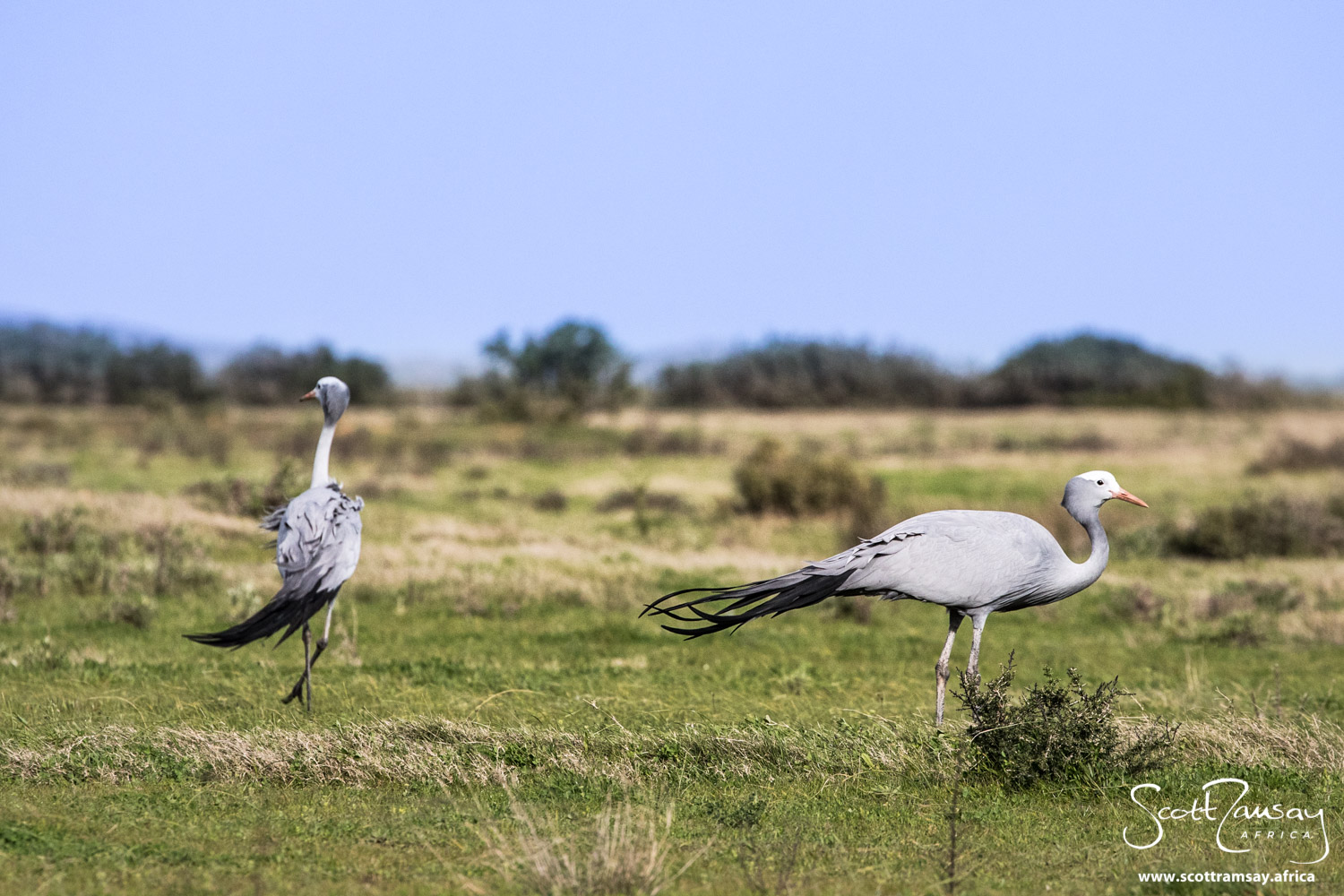 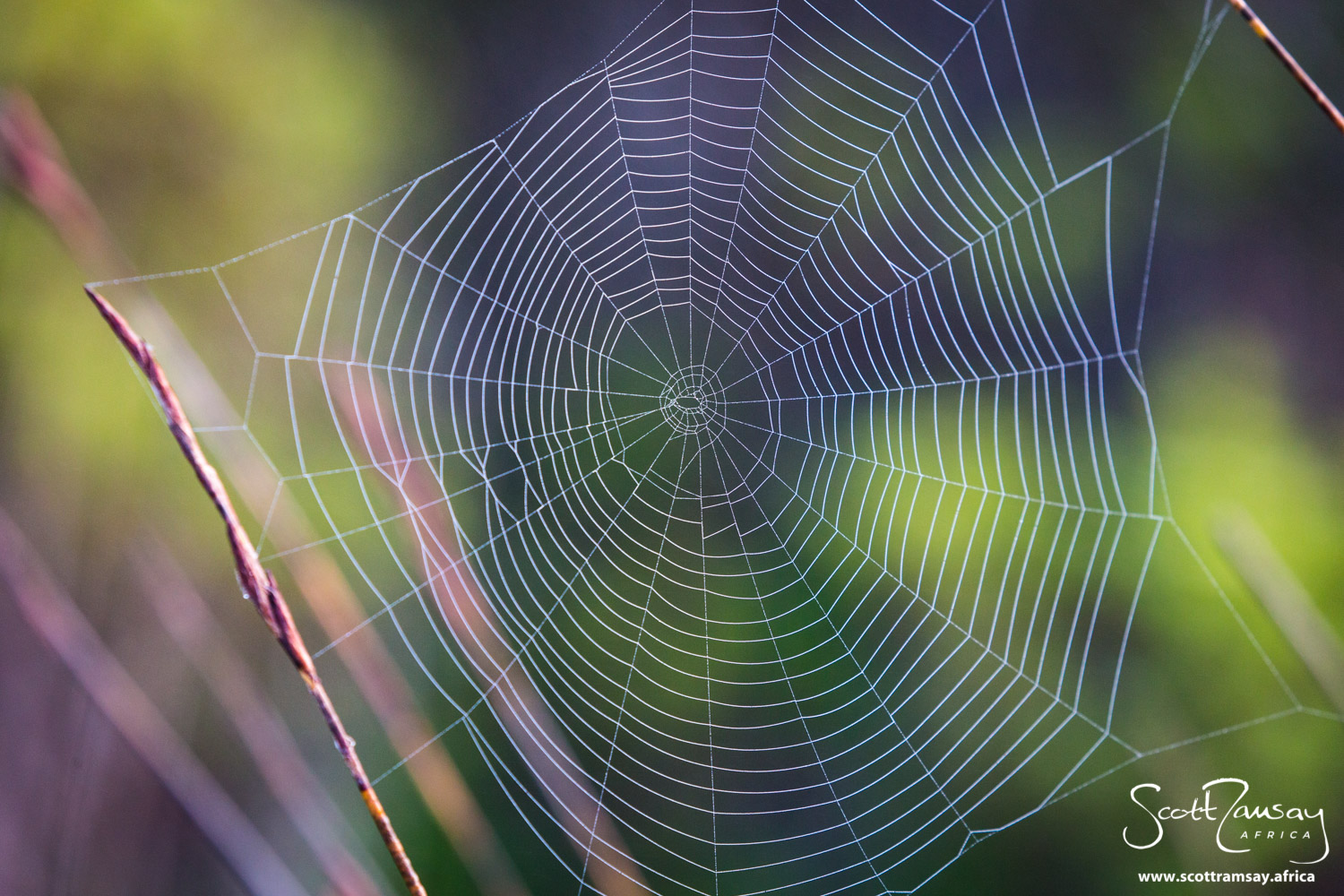 Even in comparatively small reserves, there's life everywhere...the micro matters as much as the macro! 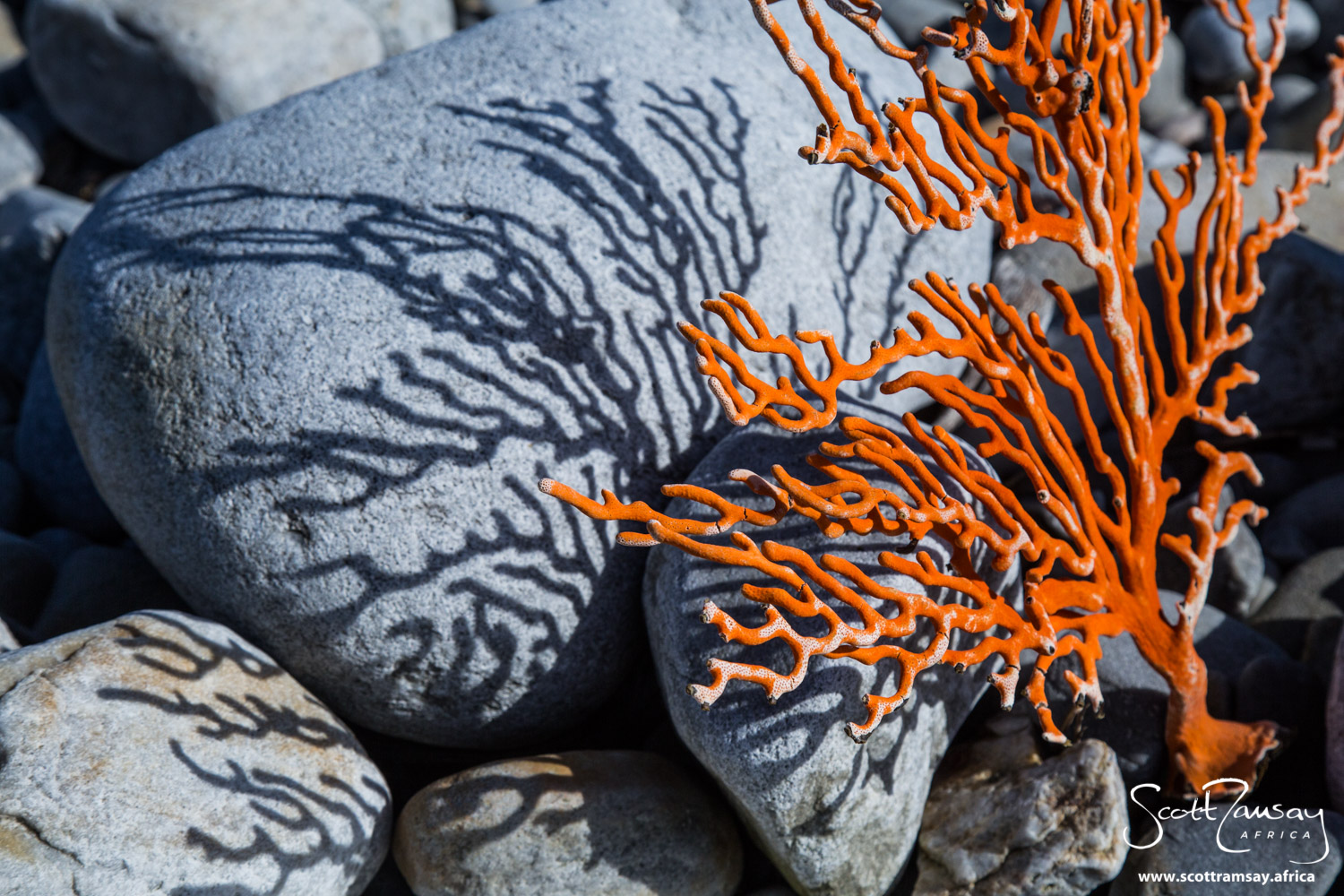 Sea fern washed up on the shoreline... 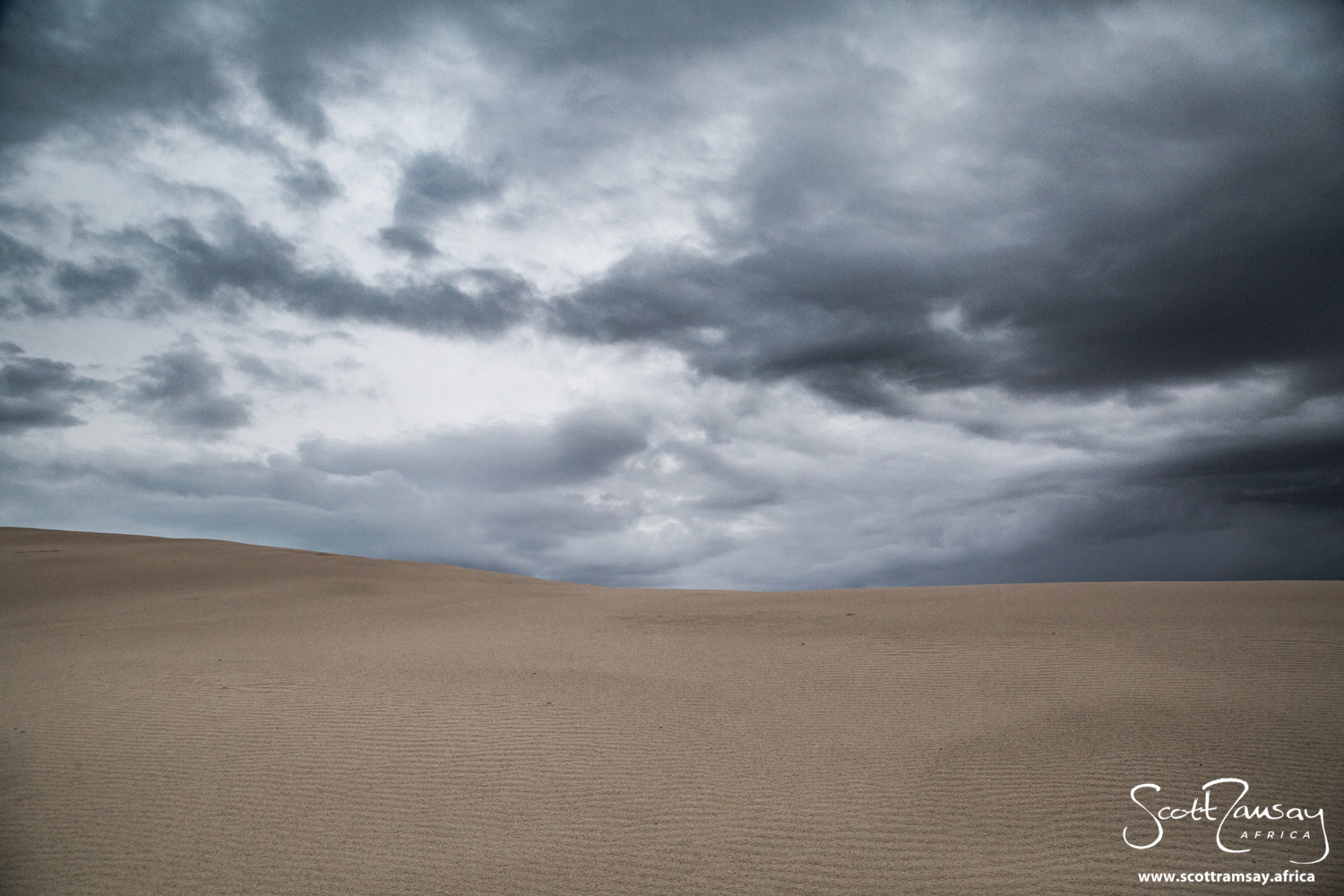