The term "wilderness" gets thrown around a lot by marketers and conservationists, and means different things to different people. Despite their relative proximity to "civilisation", the rugged and imposing mountains of the Cederberg are as close to "true" wilderness as one could get within the Western Cape - yet they are accessible to anyone who is relatively fit. 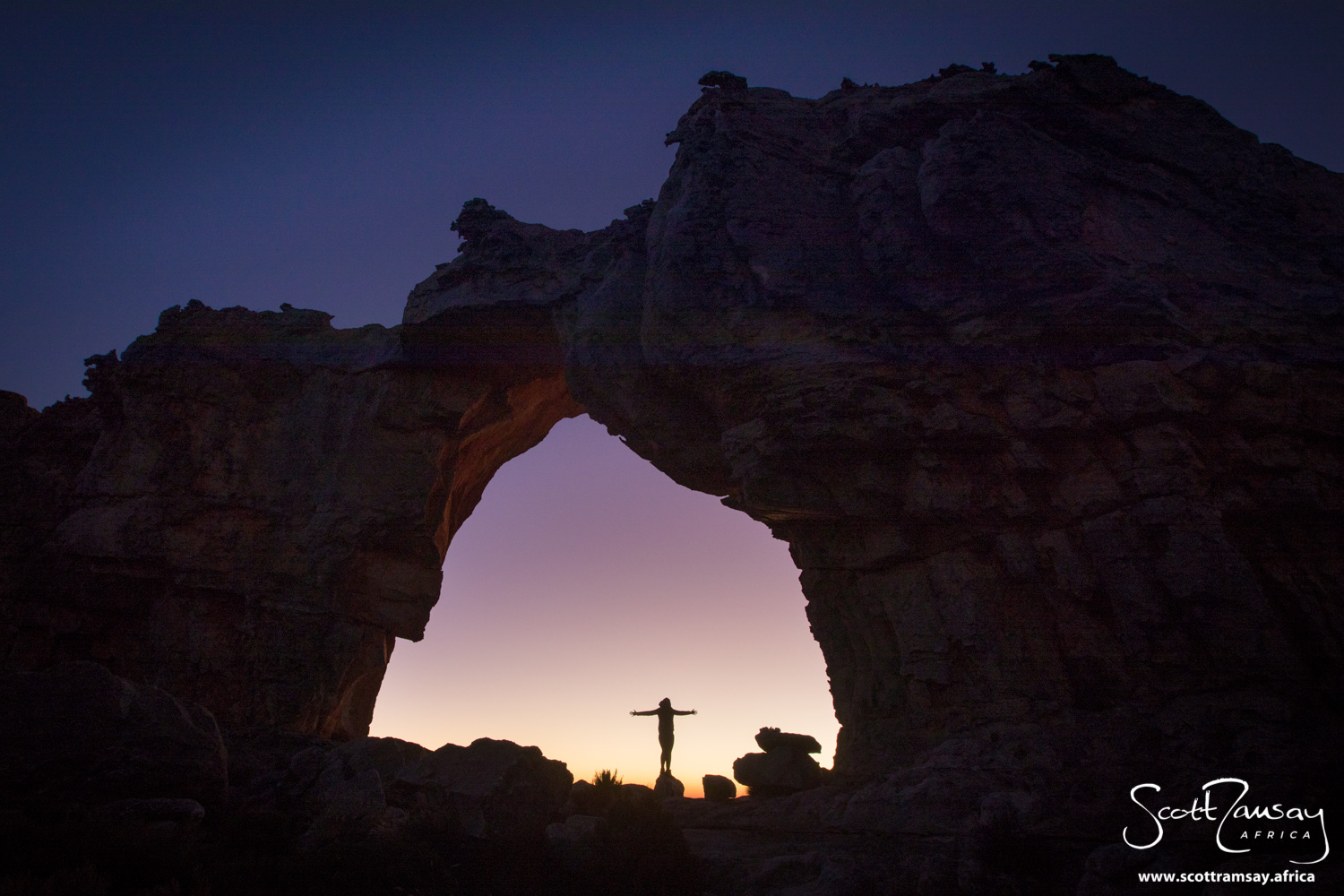 My friend Pippa Ehrlich greeting the numinous dawn at the Wolfberg Arch.

The Cederberg mountains about 3 hours north of Cape Town are maybe one of the most under-rated wilderness areas in the country.

The term wilderness gets thrown around a lot, and means different things to different people, but these rugged sandstone mountains deserve the moniker, I think. I’ve been fortunate to visit over 100 national parks and nature reserves in Africa, some of them truly deserving of the term, and others not so. But the Cederberg, despite its relative proximity to “civilization”, is one of the former.

Covering about 800 square kilometres, much of the reserve is roadless, simply because the complex terrain is filled with peaks and valleys that are too rocky and precipitous. It’s a true hiking and wandering destination, with several hundred kilometres of footpaths to explore.

I’ve often thought that if you want to escape from your relatives or the police, then head to a remote part of the Cederberg and you can easily disappear for a while. But if you’re not on police file, and you do indeed love your family, then there are several fantastic spots to stay, without having to live in a cave.

Algeria is the old forestry station in the heart of the Cederberg, and it’s here that CapeNature offers several very comfortable self-catering chalets. The views out over the Rondegat River and onto the opposing mountains are reason enough to visit. Located at the base of the scenic Uitkyk Pass, Algeria is an excellent place to base yourself while you explore the rest of the dramatic mountainscape.

There are also very nice campsites, in the shade of some old blue gum trees, and there’s a shallow weir to swim in on hot days. We visited during August, during a coruscating cold front, and were mad enough to swim in the icy water…perhaps it was 3 or 4 degrees Celsius? Who knows, but I’m not sure it was the best idea, because I felt a bit rough for the next few days! There was snow on the mountain peaks of Tafelberg and Sneeuberg (of course), so we knew the water would be a bit chilly…so we only have ourselves to blame.

There’s certainly enough fantastic scenery in the Cederberg without having to do any walking whatsoever. The views from Algeria are immersive enough, but if you want to go deeper, and experience the magic at full volume, then there are two walks that I highly recommend.

The first is to Maltese Cross, near the base of Sneeuberg. Starting near Dwarsrivier farm on the other side of the Uitkyk Pass, the hike takes about 2 hours up a not-too-steep rocky valley, to level out on the plateau below Sneeuberg.

What makes this particular location so wondrous is the context. In front of you will appear the Maltese Cross, a fantastical rock formation about 40 metres high, and possibly one of the most photographed landmarks in the Western Cape.

To the west is Sneeuberg, the tallest mountain in the Cederberg, at just over 2 000 metres. To the east is Tafelberg, another elongated peak reaching just under 2 000 meres. There is no sign of humankind anywhere, except the hiking paths. All around you is splendiferous fynbos and sandstone formations that ooze a spirit of wilderness.

Leopard tracks on the paths can sometimes be spotted, which only adds to the aura. We didn’t see any tracks on this trip, but I’ve walked the path to Sneeuberg before, and came across fresh leopard tracks in the wet sand. Just to know they are there is good enough for me!

The Cape leopards are half the size of their bushveld cousins, and although hunted and persecuted for generations, there is a new zeitgeist of tolerance in the Cederberg air. Local farmers and residents are increasingly seeing the value of these imperious predators, as more and more tourists come to the region. The Cape Leopard Trust must take much of the credit for driving the conservation of these elusive ghosts of the Cape mountains.

The second recommended hike is to the Wolfberg Arch, to the south of Tafelberg. The arch is even more impressive than the Maltese Cross, in my opinion. There are two recommended ways to get up there. The first is to start at Driehoek Farm, run by Dawie and Lizette Burger (two of the friendliest and most knowledgeable Cederbergers you’ll meet).

The path from Driehoek takes you up the steep Gabrielskloof (where there is almost always water – note for summer hikers!). Then you follow your nose south to the Arch. The other way up is from Sanddrif, which is part of the Dwarsrivier Farm. This route takes you up through the incredible Wolfberg Cracks, which in themselves are superb to explore.  Give yourself a full day at least to get to the Arch and back.

Ideally, however, take an overnight backpack, sleeping bag and some food, and spend the night at the arch. The stars are exceptionally bright, even during a full moon. The only slight light pollution is probably from Citrusdal area, far in the west. You can’t really see it with the naked eye, but an orange glow does appear on your photographs on that horizon when you take a long exposure at night.

Yet using a camera here seems silly. Allow yourself to drop into the landscape fully, without any technology. The arch looks like a gateway to another universe…and you’d be hardpressed to stay in your sleeping bag all night, even if it’s cold (as it often is outside of summer months of January and February).

There seems to be an ancient power in this place. Whenever I’ve camped here at night, I’ve gone to sleep early, then woken up from a deep sleep around 1am. Inevitably, the ineffable grandeur of the cosmos framed by the arch has drawn me out of my warm sleeping bag.

Without thinking about it really, I end up wandering around the landscape, in a type of spiritual stupor. After an hour or so, I climb back into my sleeping bag, and fall back into deep dreams, waking up in the morning on a natural, grounded high that stays with me for days.

Sleeping at the arch is a numinous experience that embodies the full essence of the power of wilderness, and reminds me why I do what I do. Nothing made by humans, no technology, no art, no science, no literature, no music can pull so strongly on my heart as these wilderness moments that the Cederberg – and countless other wild places of Africa – gives so freely.

For the second half of our stay, we moved to the Kliphuis campsite in the northern Cederberg, next to the beautiful Pakhuis Pass. I haven’t explored this part of the Cederberg as much as the central region, but in some ways, it’s even wilder.

While Tafelberg, Sneeuberg and Maltese Cross gets lots of attention from tourists, the Pakhuis Pass area is less visited by most tourists. The campsite and three cottages at Kliphuis are more intimate and smaller than the big setup at Algeria, so it also suits a more aloof visitor, someone who maybe has already been to Algeria a few times, and done the usual Cederberg hikes.

I was worried that the road over the Pakhuis Pass would be busy, but in fact it was really quiet during our stay. There isn’t a lot of traffic going from Clanwilliam to the Biedouw Valley area, and even though it was flower season, the passing cars weren’t an issue.

We spent a day walking from the top of Pakhuis Pass on the jeep track that runs to the little hamlet of Heuningvlei. The rock formations here are incredible, and would make even the most acrophobic folks want to start climbing them.

Indeed, the area around the Pakhuis Pass is known as “Rocklands”, and is a world-famous bouldering site for both professional and amateur climbers. On certain days, there can be over a hundred climbers in the area, clinging mightily onto the sandstone boulders like honorary rock agamas.

We didn’t walk all the way to Heuningvlei, instead we were content to explore the rock formations, and enjoy the flourishing fynbos after a most-welcome rainy Cape winter. Some of us drove on to the Biedouw Valley, about 30 mins to the east, to admire the spring flowers.

As always, I returned from the Cederberg wanting to go back as soon as possible. And that perhaps is the best commendation I can give a wilderness area…always wanting to explore more of it, to get to know it more, and to be absorbed by it fully.

I’d like to do a Cederberg traverse, walking these mountains from north to south. The Ceder tree (Widdringtonia cederbergensis) gives these mountains its name, and is found here and nowhere else on earth. There were once far more of them, but colonial foresters and farmers chopped most of them down to make telephone polls and planks for homes (same old story, right?).

Today there are only a few thousands left. Their range is limited: their northern-most occurrence is near the Pakhuis Pass, and their most southerly occurrence is just south of Sneeuberg. Let’s go walk that route next time… 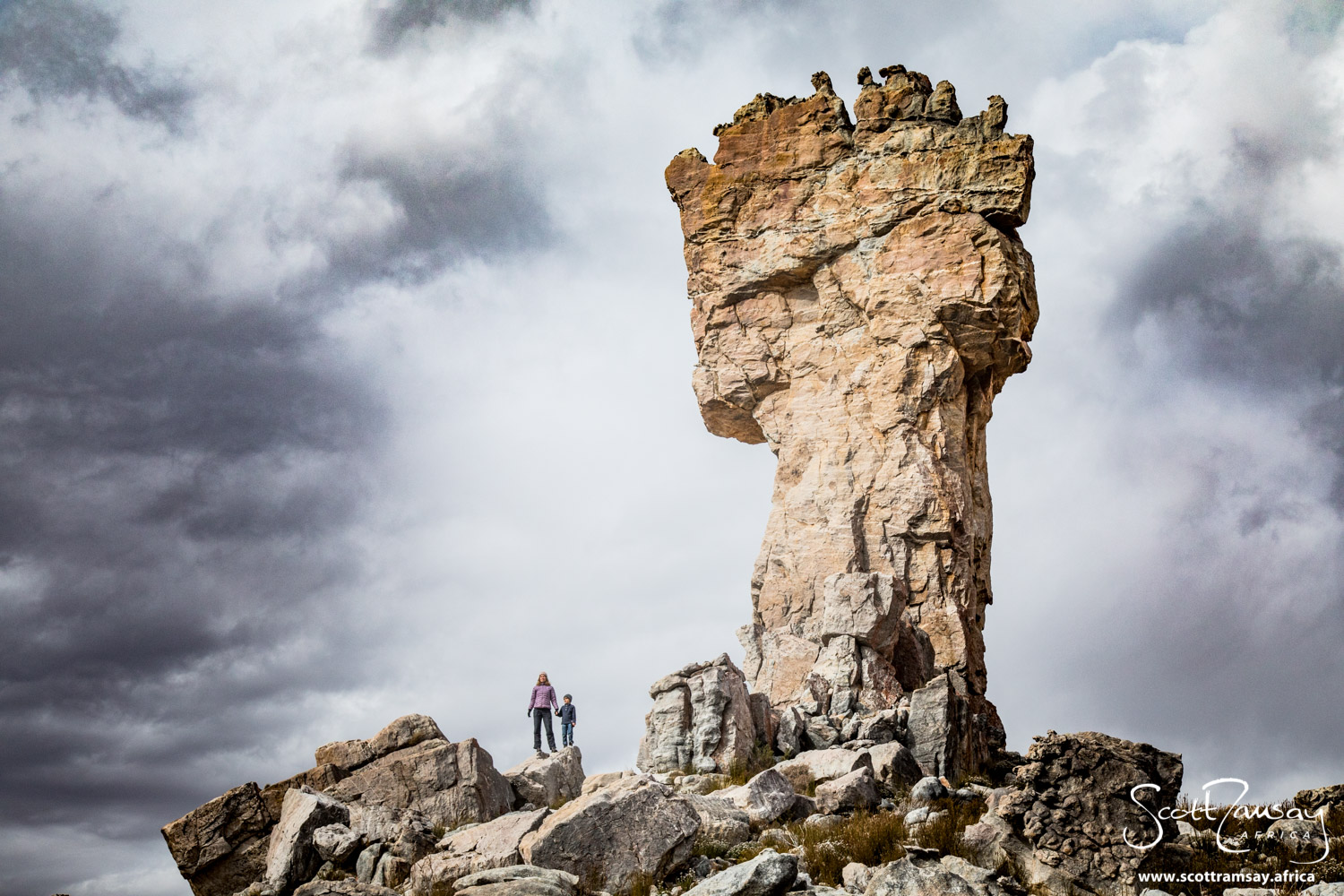 My fellow explorers Jax and Gabriel Davis dwarfed next to the Maltese Cross, one of several spectacular rock formations in the Cederberg Wilderness three hours north of Cape Town 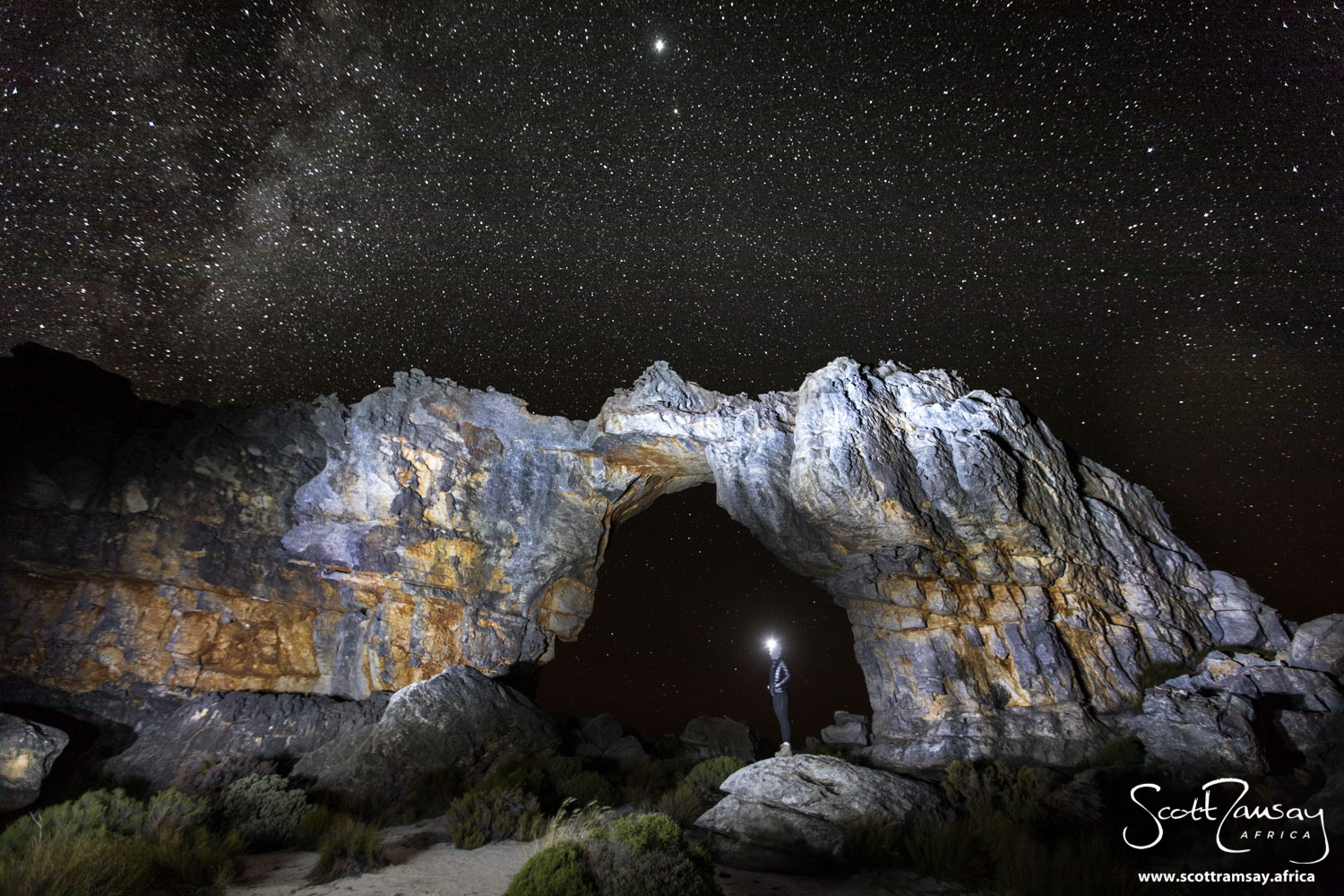 We are all made of star dust. Scientifically proven, but truly experienced when sleeping under the stars at the Wolfberg Arch.

The road to Driehoek Farm, at the top of Uitkyk Pass. Tafelberg Mountain bedecked with snow rises to almost 2000 metres. 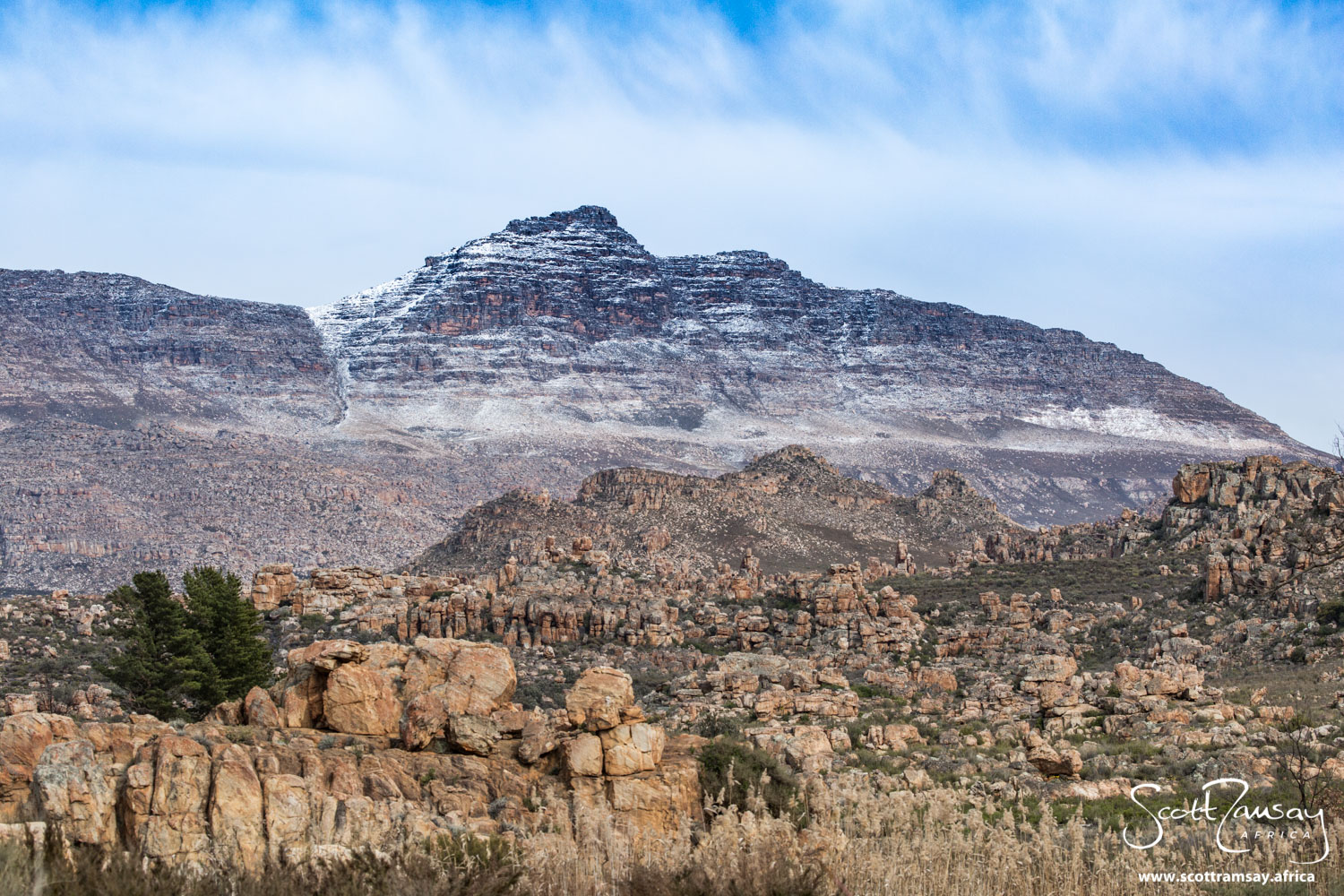 Sneeuberg - meaning "snow mountain" in Afrikaans - is suitably decorated with snowfall after the cold winter of 2020. 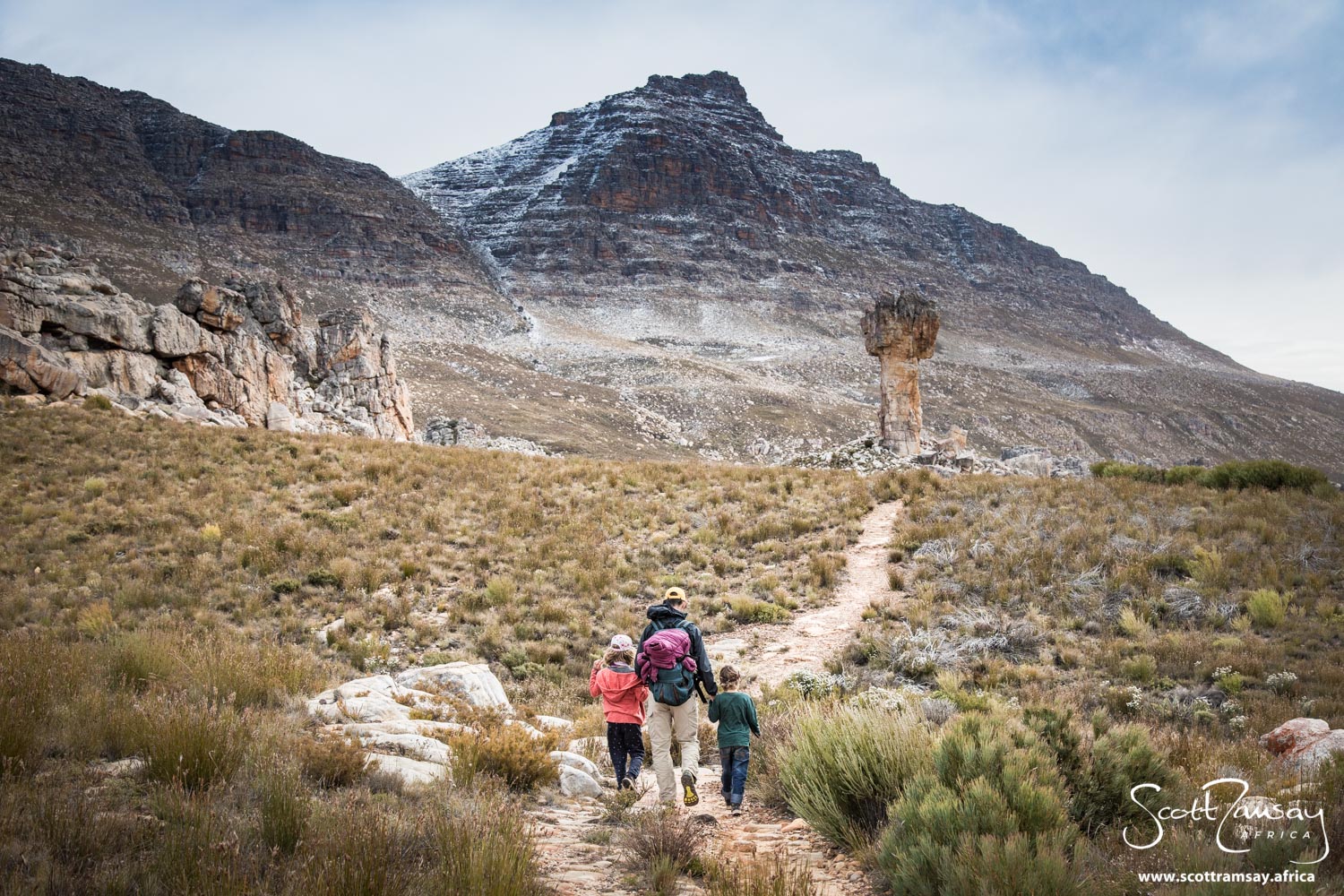 Friends Steve, Azara and Gabriel Davis approaching the Maltese Cross, with Sneeuberg rising to almost 2 000 metres on the horizon. Note the sprinkling of snow - winters in the Cederberg can be cold! 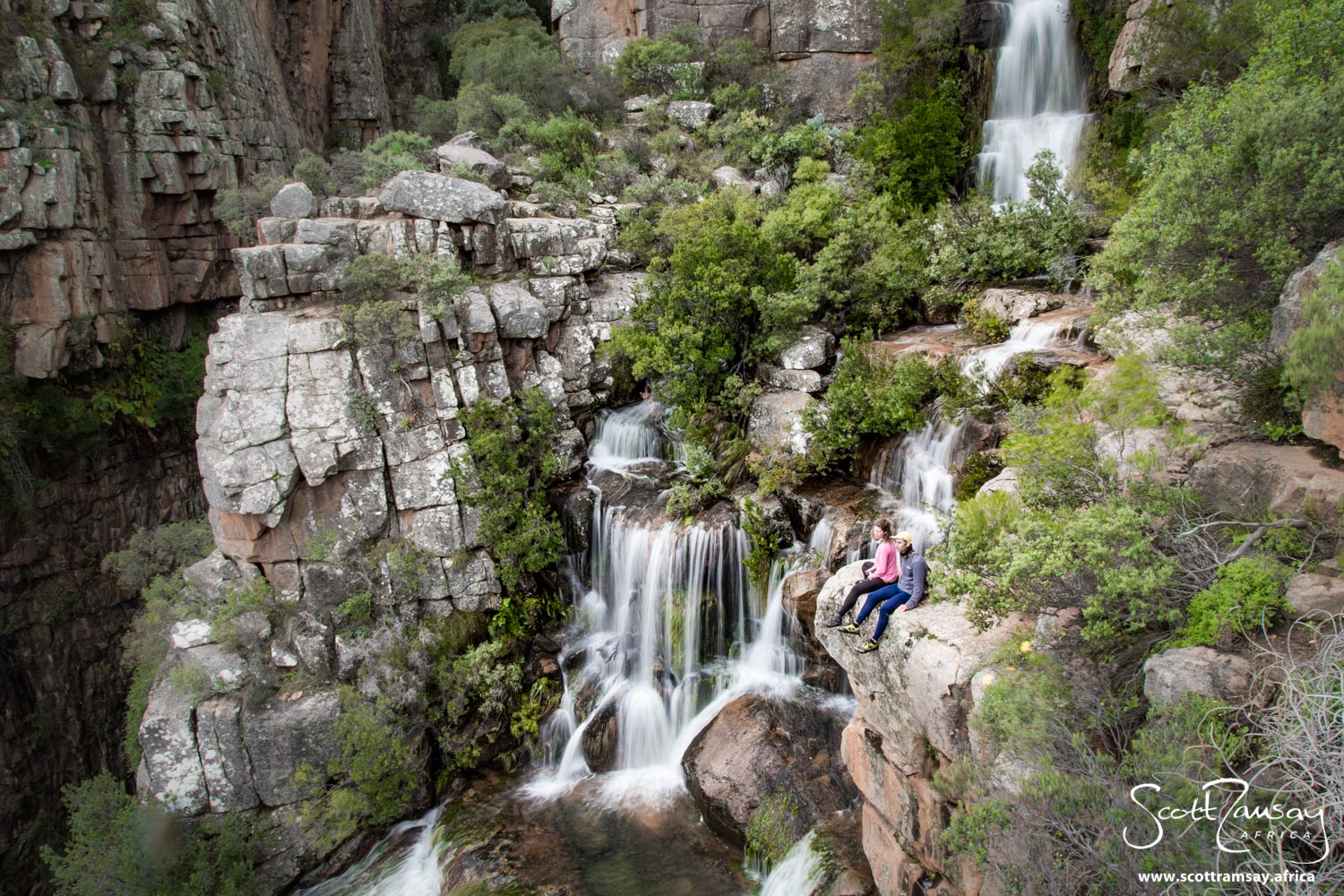 This waterfall and river is about an hour's walk up the mountains from the campsite and chalets at Algeria, the main entrance to the Cederberg wilderness. 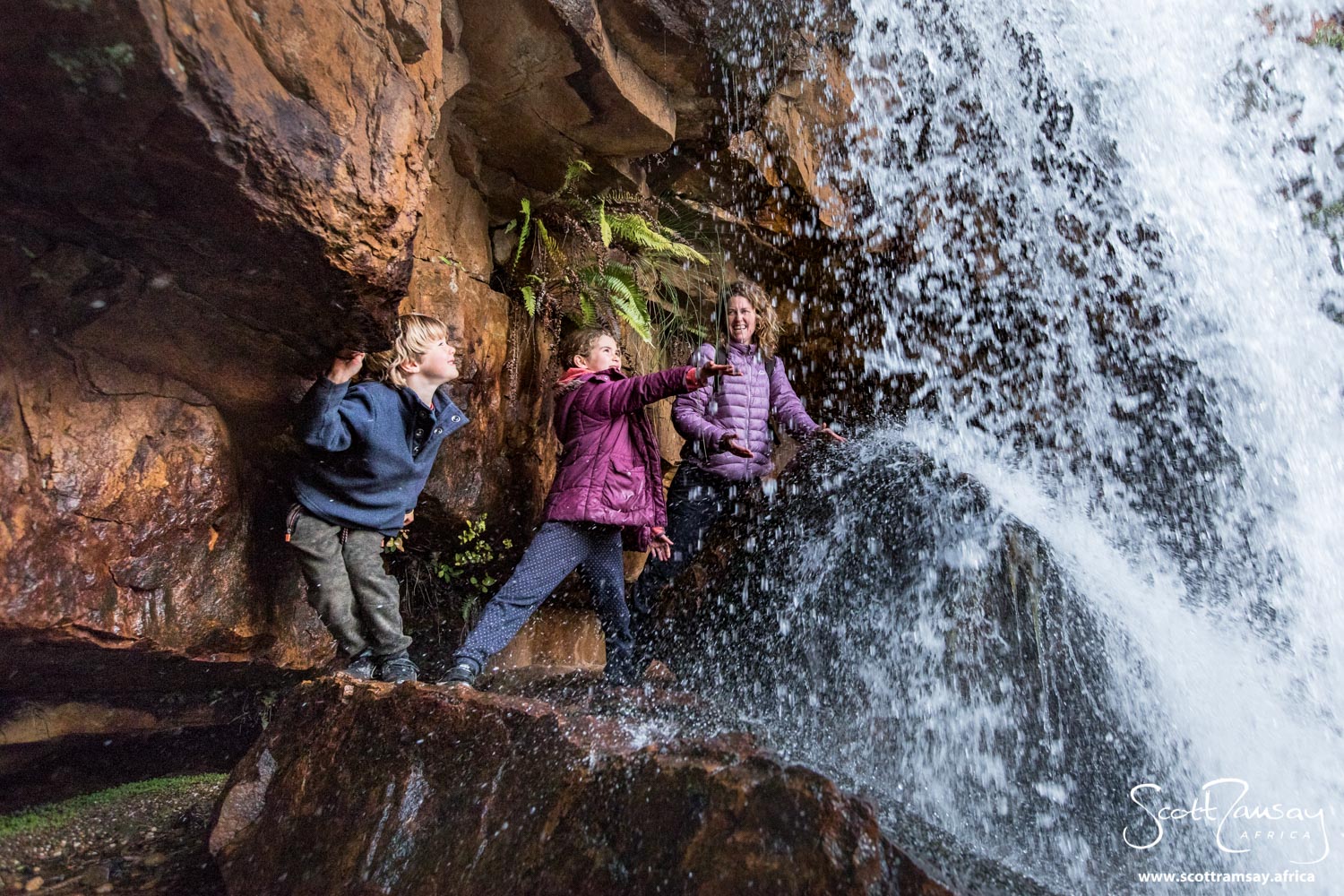 My friends Gabriel, Azara and Jax getting elemental with the surging rivers and waterfalls of the Cederberg in winter. 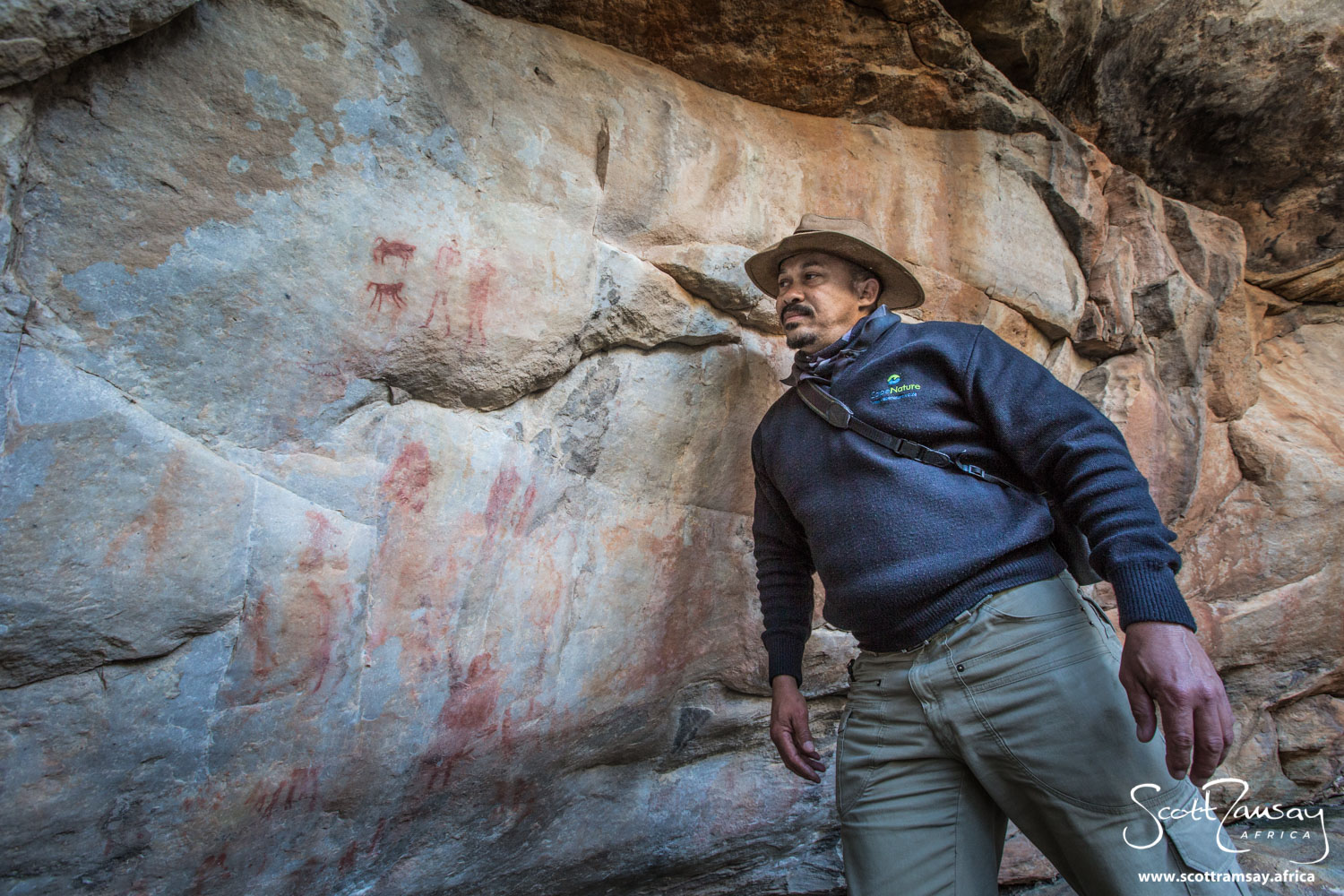 Field ranger Jona Zimry is the man who looks after the northern Cederberg. His father John Zimry was a legend of the area, "discovering" many of the rock art paintings for which the Cederberg is world famous. 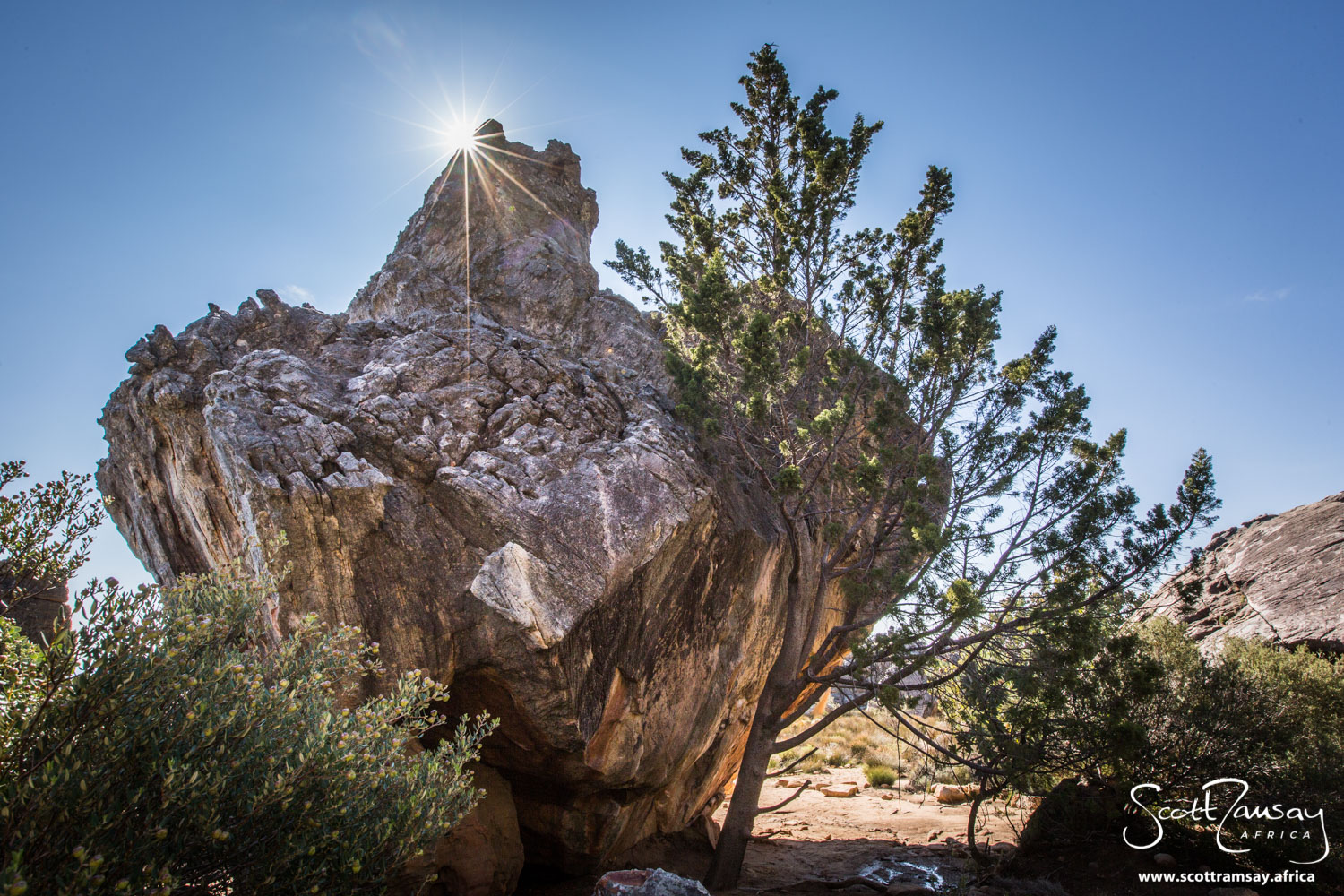 A relatively young ceder tree of the species "Widdringtonia cederbergensis". This species of ceder tree is found only here in these sandstone mountains. Their future survival is under threat for reasons that scientists are still uncertain about...but one suggestion is, unsurprisingly, climate change. Based on long-term weather records, the Cederberg is increasingly experiencing higher temperatures, and lower rainfall. 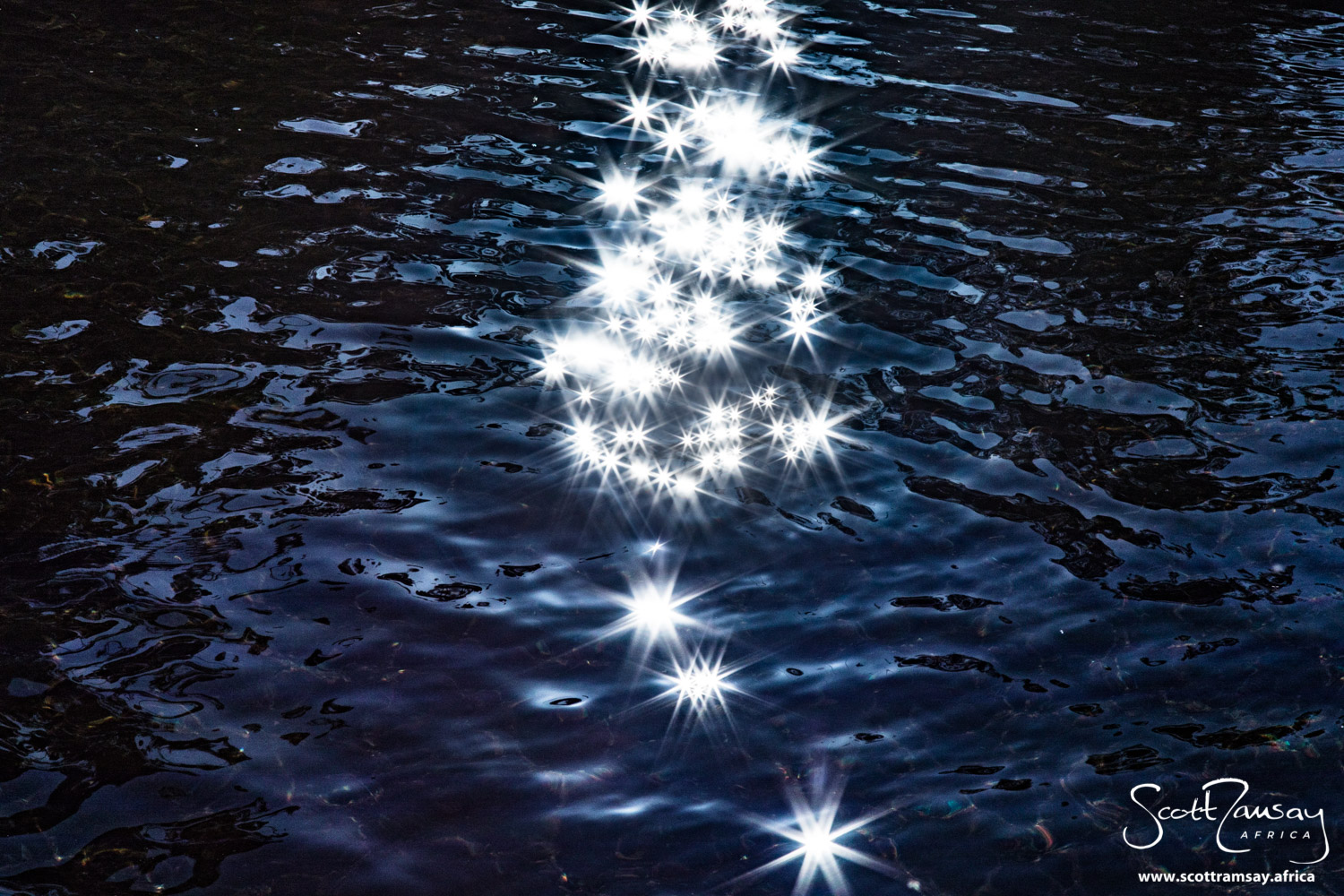 Cold waters flowing in the Rondegat River that flows through the campsite at Algeria. During the hot, dry summer, these rivers are the lifeblood of the mountains, and in winter, they make for exceptionally cold swimming! In the drought of 2017, almost all the streams in the Cederberg dried up, for the first time that most people remember. This year, in 2020, winter rainfall was generous.