The name Gonarezhou means ‘place of the elephant’, an apt description of this brooding lowveld wilderness in south-eastern Zimbabwe. This remote park has more than 11 000 elephants, more than the whole of neighbouring Mozambique. After decades of serious challenges, the park's wildlife is thriving and includes some of the biggest elephant tuskers on the continent. 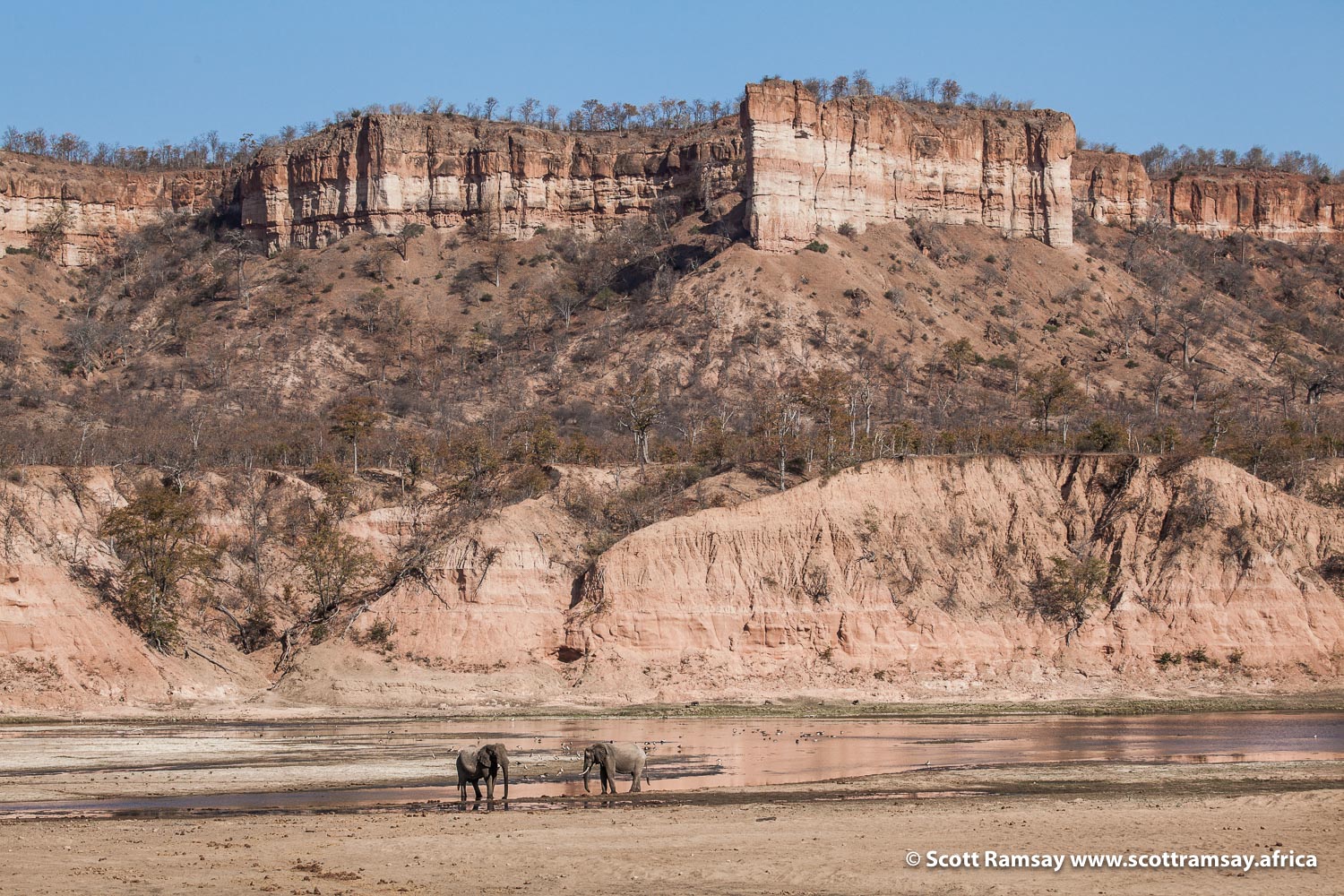 Elephant bulls on the banks of the Runde River, at the base of the Chilojo Cliffs in Gonarezhou National Park

We’d set up camp near the base of the Chilojo Cliffs, where the broad Runde River turns north to meet the Save River. Tired from the hot day, we drank cold beers and sizzled our meat on a mopane wood fire. Soon we fell asleep on our stretchers under a sparkling celestial ceiling. But not for long.

The night’s silence was cracked wide open by a succession of baritone roars. My deep dreams ended abruptly as adrenaline surged through my body. I shone a torch in the direction of the sound. A large male lion stood 30 metres away. Slowly he walked towards us with predatory entitlement. We quickly stoked the fire and flames shot into the sky.

The big cat stopped a few metres away, then fortunately lost interest and walked down into the dry riverbed, leaving us for the night. Sleep came surprisingly easily again, and at dawn we woke to three elephant bulls feeding on branches of a nearby apple-leaf tree, the leaves falling like confetti around us.

Unlike the lion, the elephants ignored us and focused on their breakfast. I lay in my sleeping bag and watched them, then turned to admire the first rays of sun bursting into the sky above the Chilojo Cliffs. The red sandstone ramparts are spectacular, and shone luminously in the early morning light.

It’s these visceral interactions with wilderness that make a visit to Gonarezhou special – and rare, in this increasingly commercial era of wildlife tourism. The park lies just across the border from well-trodden Kruger in South Africa, but it’s another world. There are no tar roads, fenced campsites or shops here.

For decades Gonarezhou was considered too remote, virtually inaccessible to tourists. Besides, visitors want to see animals, and most had been shot out by hunters and poachers.

But today, wildlife numbers here are booming. The 2014 aerial survey counted just over 11 000 elephants in the park, up from 4 000 in 1994. Gonarezhou has more elephants than the whole of Mozambique, and one of the highest densities in Africa (at about two per square kilometre).

And it gets better: the tuskers of Gonarezhou are the biggest in Zimbabwe, clearly sharing DNA with the famed large bulls in Kruger. In 1979, Kabakwe was the legendary bull that was the first to be given special legal protection from hunting.

One of the biggest of recent times (tusks of 45 kilograms each) was sadly shot in the Malapati hunting area adjacent to Gonarezhou in October 2015. (Rightly or wrongly, hunting is still very much seen as a conservation tool in remote areas of Africa that are unsuitable for photographic tourism).

So the bulls with big ivory are still here, only there used to be far more of them.

But Gonarezhou is not just about elephants. In 10 days we saw lion four times and heard their roars most nights, as well as the howls of spotted hyenas. We also saw a pack of seven wild dogs and several pups; Gonarezhou has one of the strongest populations of these endangered carnivores, a dozen packs.

‘I never saw a lion or leopard for the first three years here,’ says Hugo van der Westhuizen, the park’s conservation manager for the past decade. ‘You’d wake up early in the morning and there were hardly any animal sounds. It was depressing.’

Now, thanks to stringent anti-poaching measures, the animal statistics makes for reassuring reading. The last predator survey in 2015 showed that there are approximately 125 lions, up from just 31 in 2009.

At the last count in 2014, there were 8 000 impalas, 1 700 kudus, 6 000 Cape buffaloes, 1 300 Burchell’s zebras, 900 wildebeest, 500 giraffes and 500 hippos. Roan and sable have never recovered to former levels, and black rhinos and Lichtenstein’s hartebeest are now locally extinct, but on the whole things are much better.

If all goes to plan, the increase in tourism revenue will allow the reintroduction of rhino, which Hugo says could happen as soon as 2018.

Then there’s the spectacular landscape.

Mana Pools has its albida forests alongside the Zambezi River. Gonarezhou’s Chilojo Cliffs elicit a similar sense of wonder. Rising 200 metres above the floodplain of the broad Runde River, the 13-kilometre sandstone rampart is magnificent.

It’s the defining feature of this remote wilderness. Here the Runde flows south and seems to bump into the cliffs, then has to flow north to meet the narrow, powerful Save. Together, these rivers give the northern part of the park a unique sense of place.

From the top of the cliffs, Gonarezhou’s diverse landscapes are clear to see. Most obvious are the extensive floodplains alongside the Runde, which reminded me a little of those at Mana Pools at the opposite end of the country.

The large Tembwahata Pan lies near the confluence of the two rivers and draws plenty of elephant, buffalo and other wildlife during the hot days.

The nearby and smaller Machaniwa Pan is just a few hundred metres south of the Runde River, and a superb place for spotting saddlebilled storks and fish eagles, who prance around the muddy waters scooping up unlucky catfish.

Vast mopane woodland dominates the basins and plateaus on either side of the Runde. The scene is grand.

‘Gonarezhou has diversity of habitat that most other parks don’t have,’ says private guide Anthony Kaschula, who started Gonarezhou Bush Camps, a mobile wilderness camp, in 2009.

The park could also be Africa’s epicentre of baobabs. There are thousands of these arboreal grandfathers. Near Tembwahata Pan, we counted 60 within sight of us.

Anthony believes Gonarezhou’s best feature is its lack of tourists.

‘It’s still off the tourism map. While there are other places in Africa that are also very wild, many of those are overrun with visitors.’

While Anthony has his own exclusive campsite for his private guests, the national park authorities have only three “camps” in this 5 000-square kilometre park, with tented chalets or ‘developed’ campsites offering basic thatch-and-stone shelters and ablutions.

The rest of the “campsites” are just GPS co-ordinates on a map, with a long-drop toilet, and can only be used by one group at a time. All of these, 26 in total, are far from each other.

‘We think Gonarezhou is a secret success story,’ Hugo told me in his office at Chipinda Pools, near the northern entrance to the park. ‘But please, don’t tell that to anyone!’

About 7 000 visitors come to the park annually. This may seem paltry compared to Kruger’s one million, but just a decade ago almost no one visited.

‘Don’t get me wrong, I’m happy tourists are returning,’ he said, ‘but we didn’t anticipate how quickly this place would turn around.’

Near the end of our 10-day visit, Hugo and his wife Elsabe invited us to camp with them at the top of the Chilojo Cliffs.

As the elephants have done every night in winter for thousands of years, they descended the escarpment via one of the few passes to quench their thirst at the Runde River below. The full moon rose. In prayerful silence we stood on top of the cliffs and watched several breeding herds negotiate the steep pass below us.

A warm wind picked up and carried our whispers and wood-fire smoke away from the matriarchs.

These elephants were doing what they’ve always done, oblivious to our presence. At Gonarezhou, you get the feeling that the animals are in charge. And as parks go, it is once again one of Southern Africa’s finest.

To book your own self-drive trip to Gonarezhou, please visit their website. Or you can contact Anthony Kaschula at Gonarezhou Bush Camps for an exclusive, guided safari. 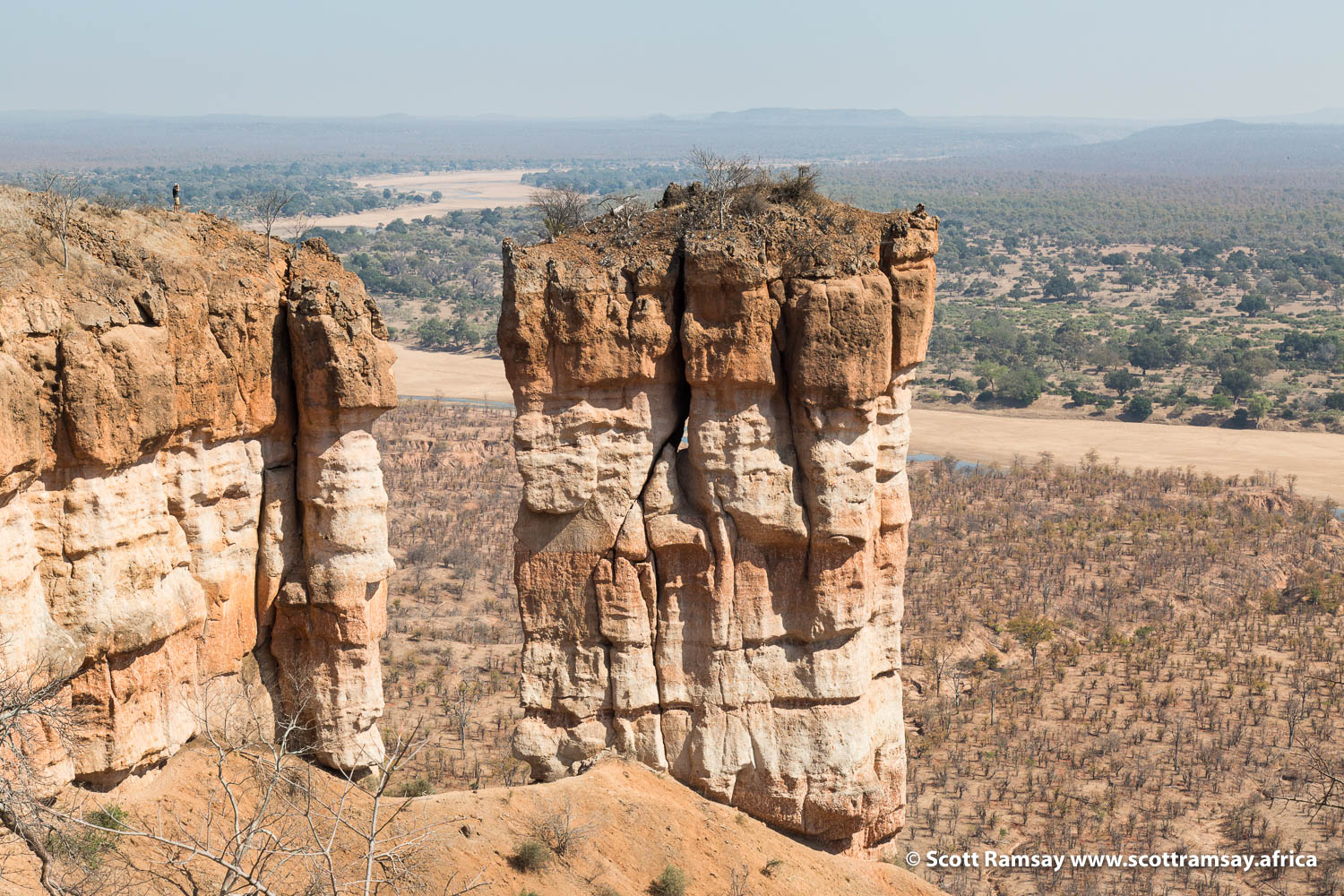 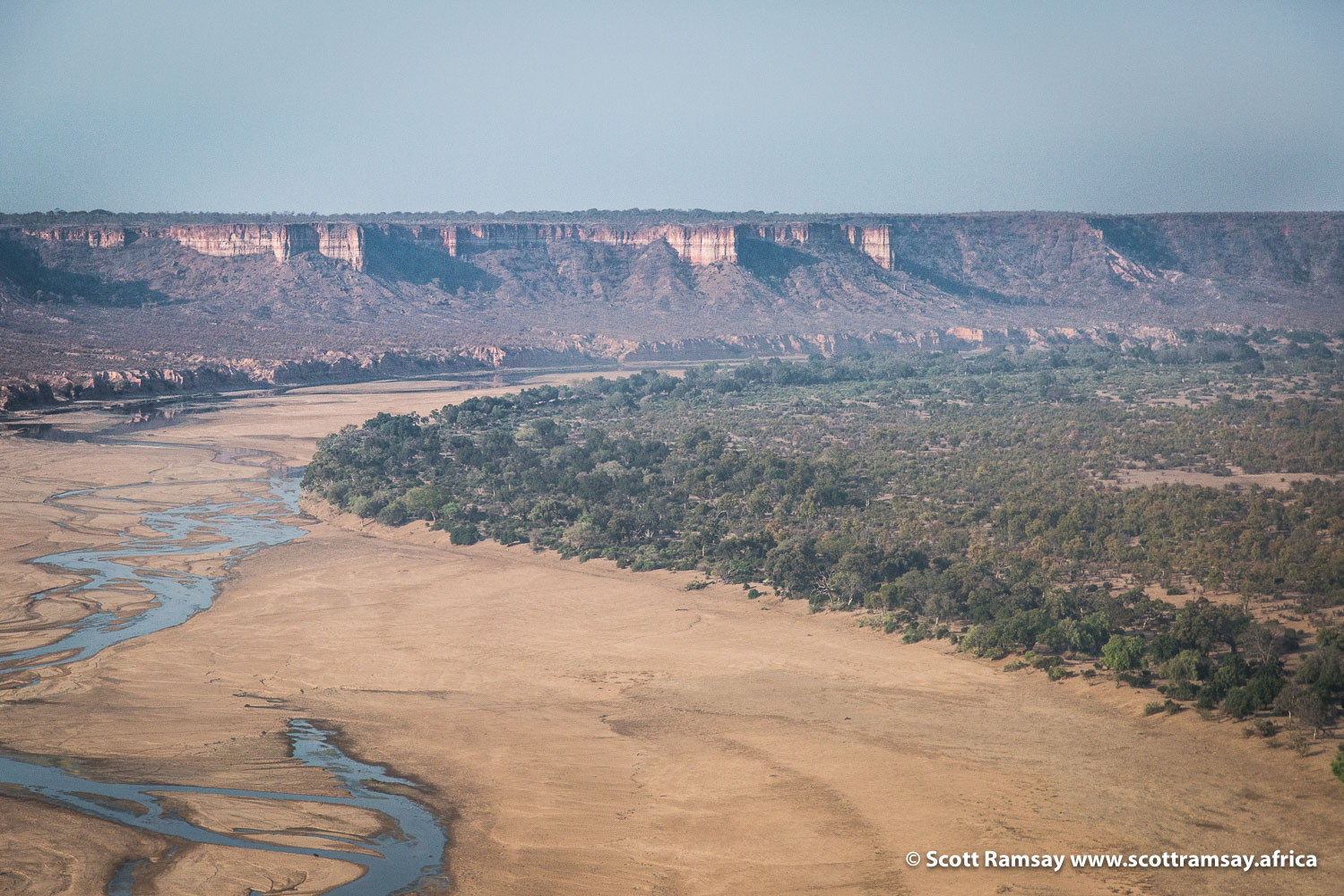 Flying over the Runde River, with the Chilojo Cliffs in the background. In dry season of winter (June to October), the river is very low (as pictured). In rainy season from January to March, the entire river floods. 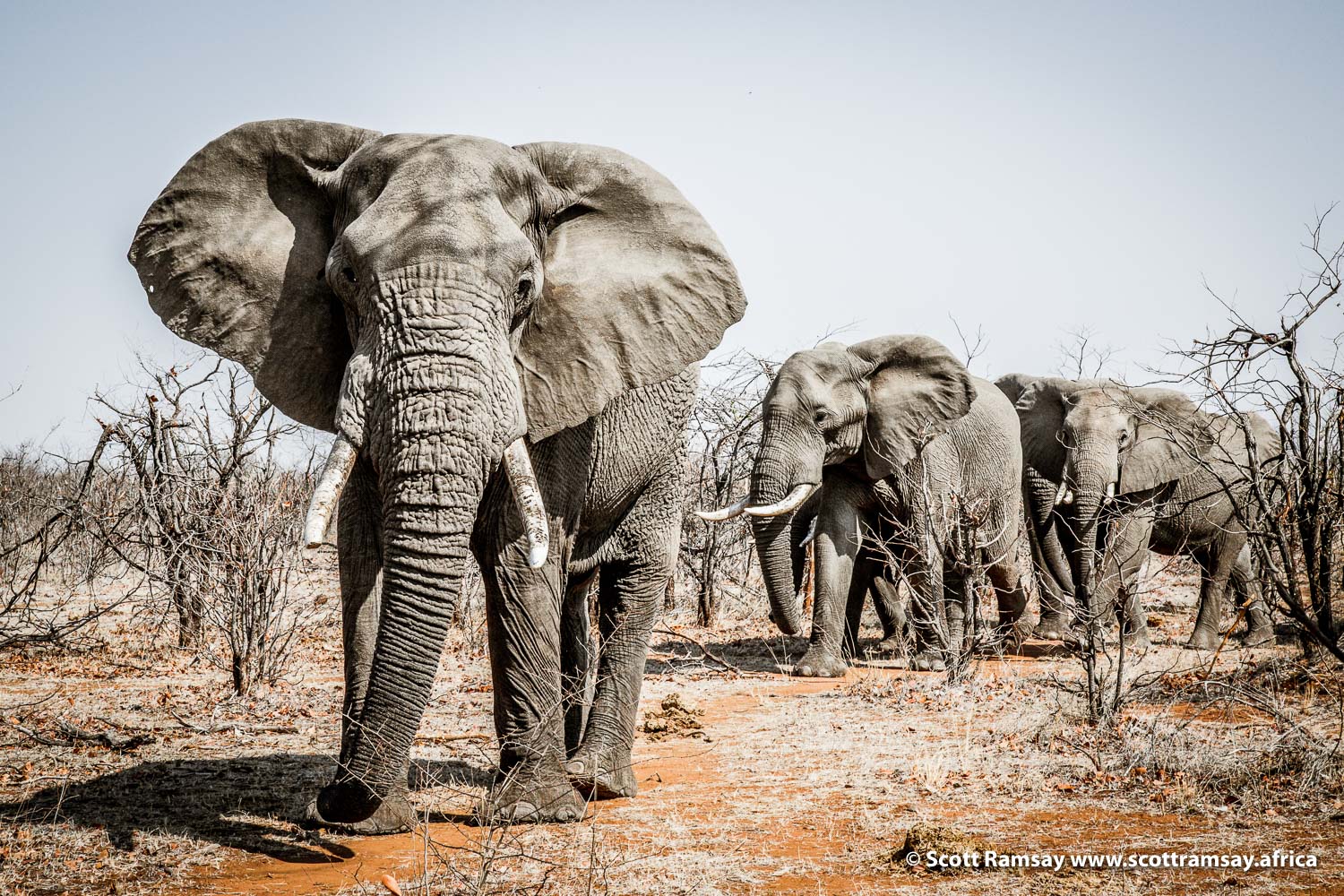 What it's all about. Gonarezhou's bull elephants are mostly relaxed, allowing for some close-up encounters, but the breeding herds are a different matter altogether. Although poaching is much reduced, and hunting is better controlled, elephants remember the carnage inflicted on their species by humans in this region. 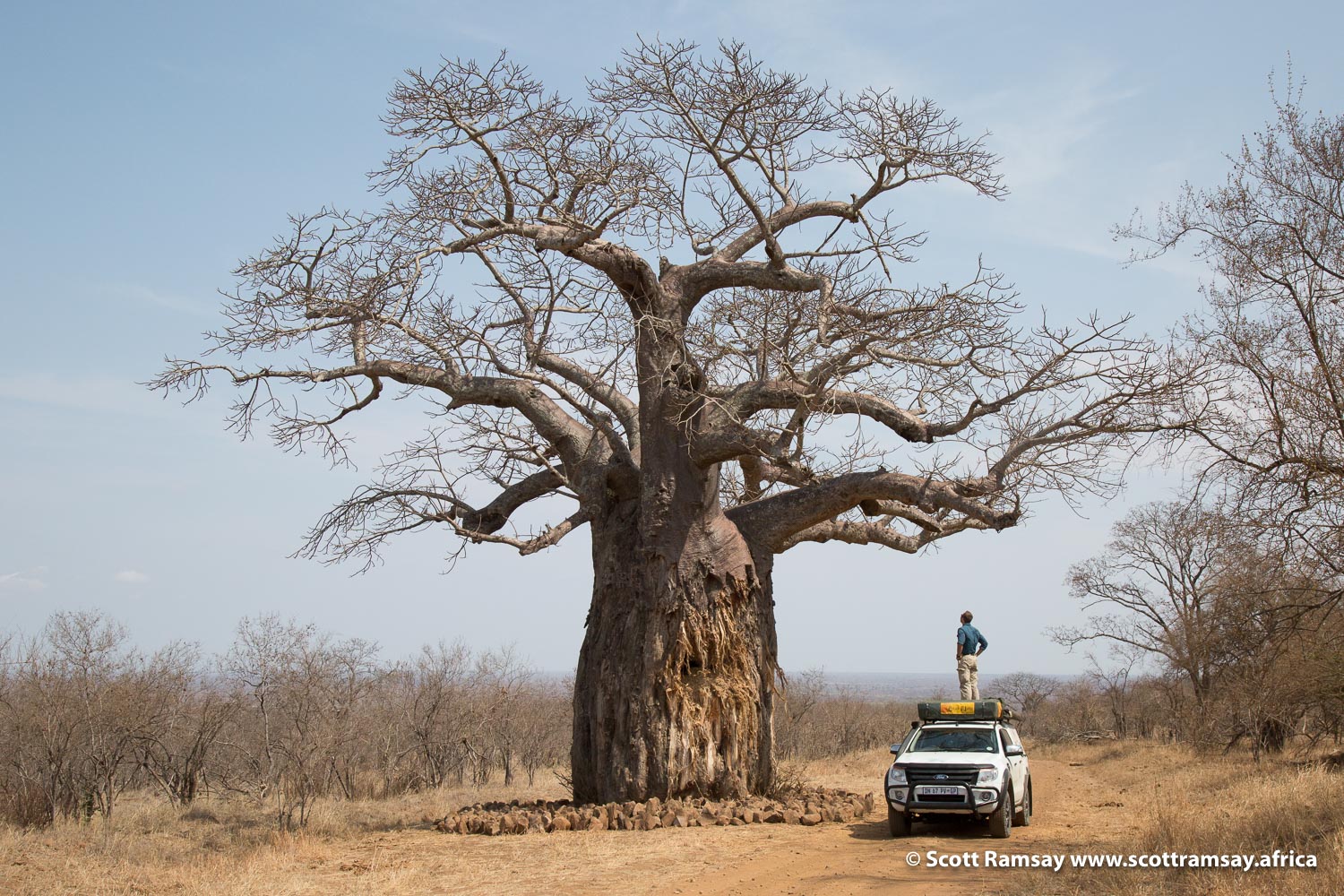 My friend Andy giving scale to a baobab tree. Note the stones around the base of the tree, placed by rangers to help prevent elephants from eating the trunk of the baobab, which ultimately will cause the tree to collapse. 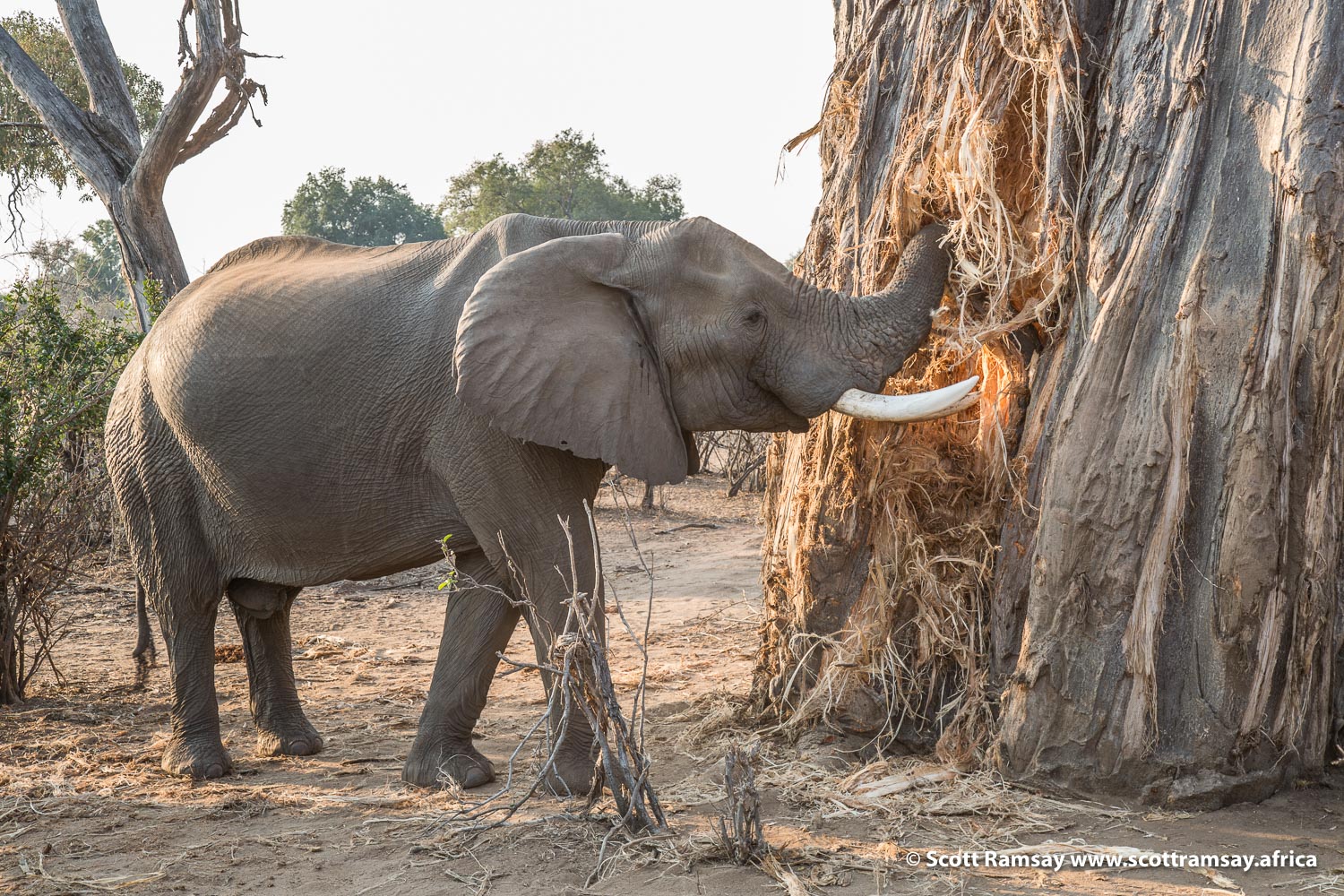 In dry season, the baobabs are targeted by elephants, which are desperate for nutrition (and moisture - as the baobab's light and soft wood is made up mostly of water). While increasing elephant numbers in Gonarezhou are to be celebrated, conservationists like Hugo van der Westhuizen are faced with some very hard choices. Elephants today are restricted to parks and reserves, surrounded by human development, but their impact on a landscape's ecology can be detrimental to the conservation of other species that rely on the same landscape for survival. 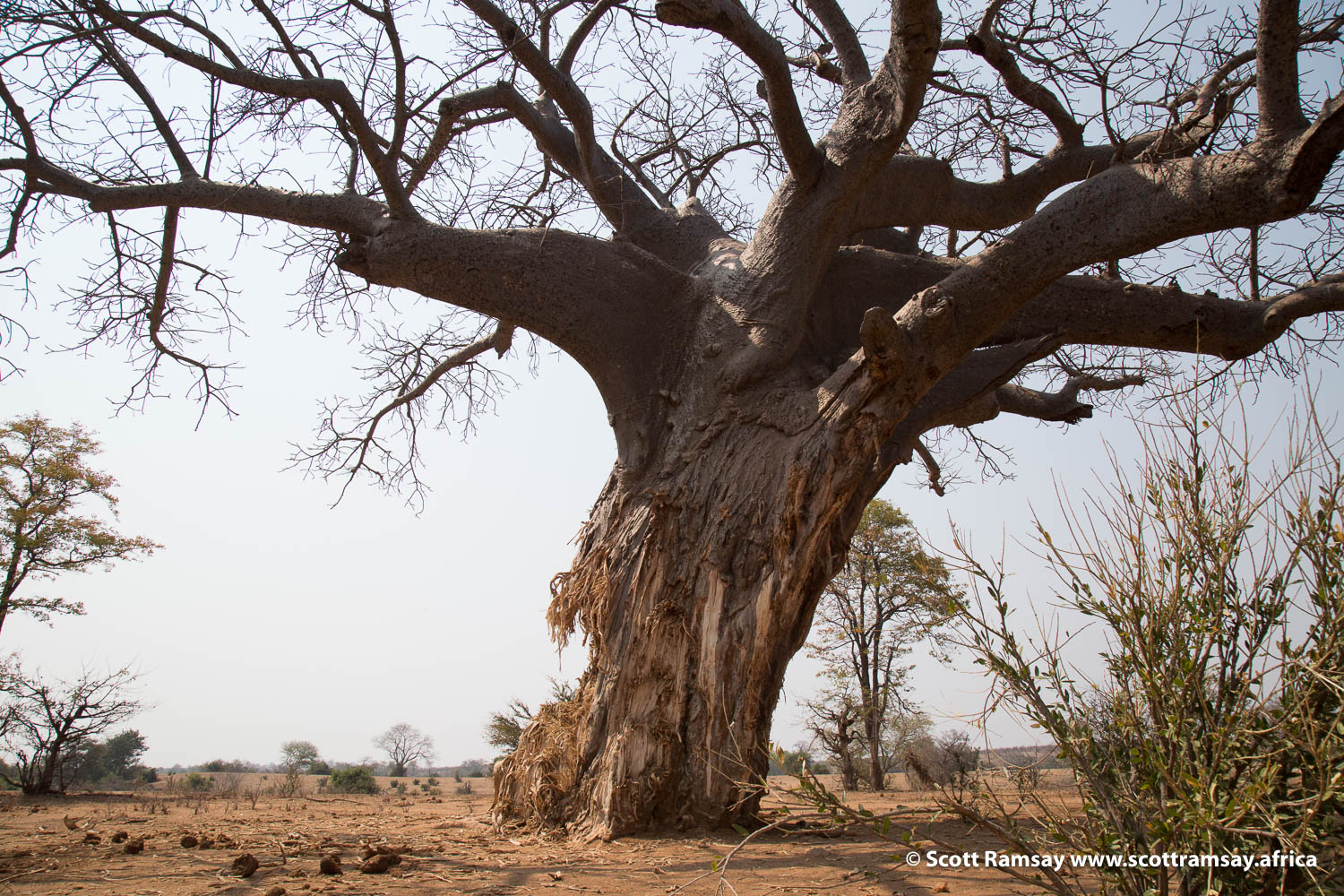 This baobab is on its way out. Although huge, and seemingly indestructible, baobab wood is exceptionally soft, and elephants can easily gouge out it's trunk. 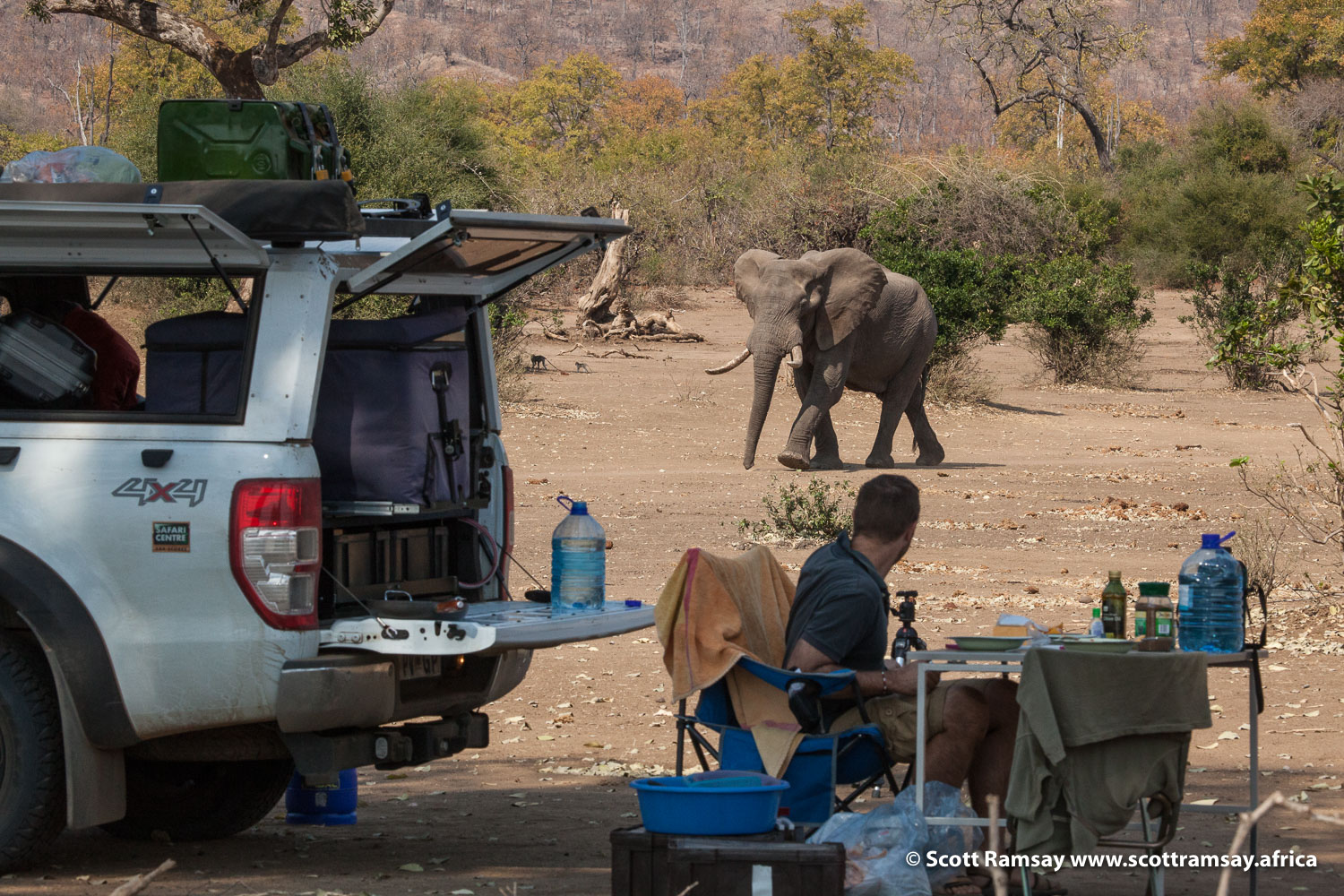 Camping at Hlaro Campsite, near the Chilojo Cliffs. While we were having breakfast one morning, this bull elephant walked past, but not without approaching us and giving us a sniff. The campsites in Gonarezhou are GPS points on a map, with a long drop toilet as the only facility. The campsites are not fenced, and campers need to be totally self-sufficient. 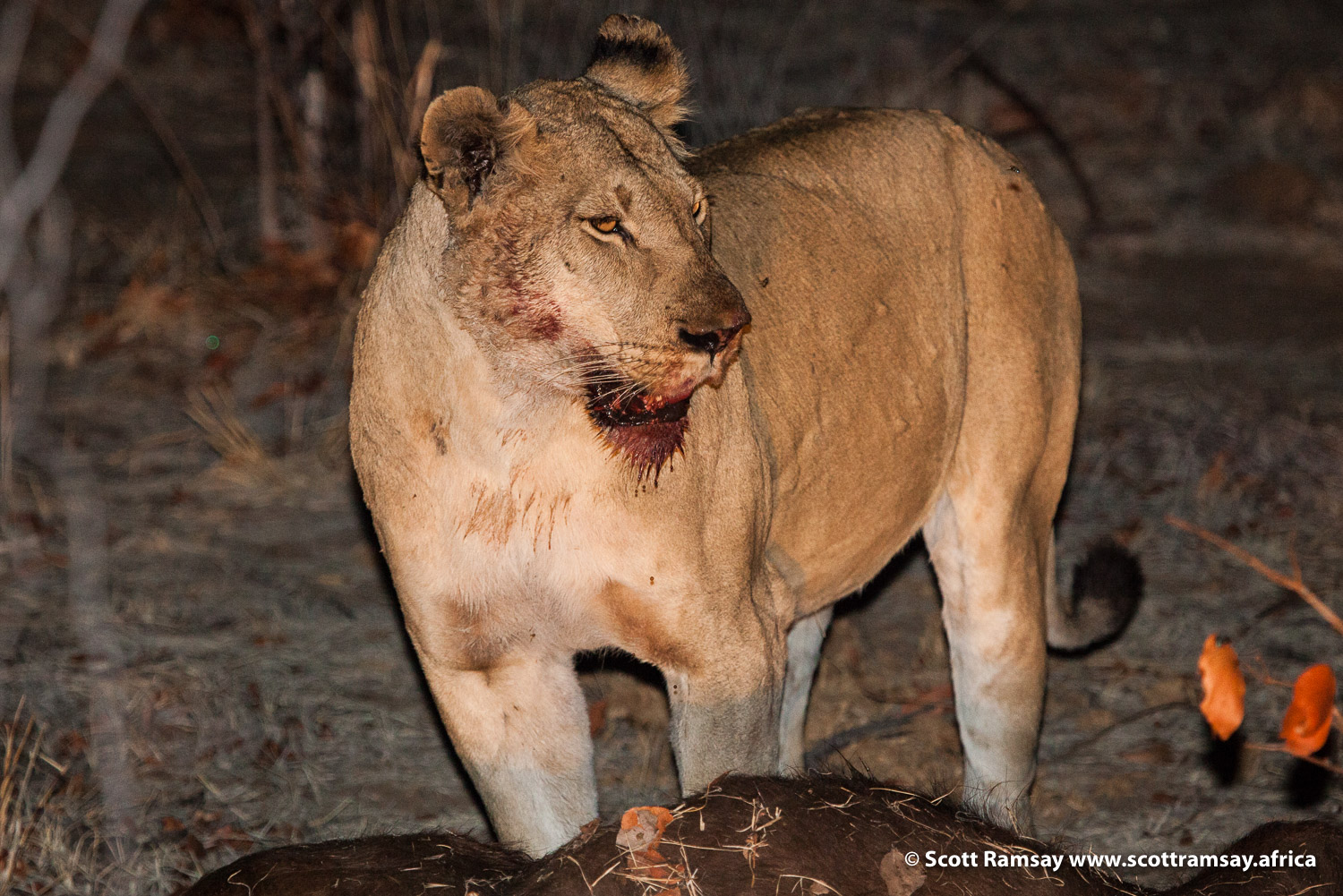 We spotted this lioness on a buffalo kill one evening when Hugo van der Westhuizen took us on a short night-drive near Chipinda Pools. Gonarezhou is home to one of the more successful wild dog populations in Africa. The 5 000 sq km park is largely uninhabited by people, so wild dogs can do what they like doing...ranging wide and free without persecution. Until they leave the park that is (most of the park is unfenced, and often wild dogs will dig under fences anyway). 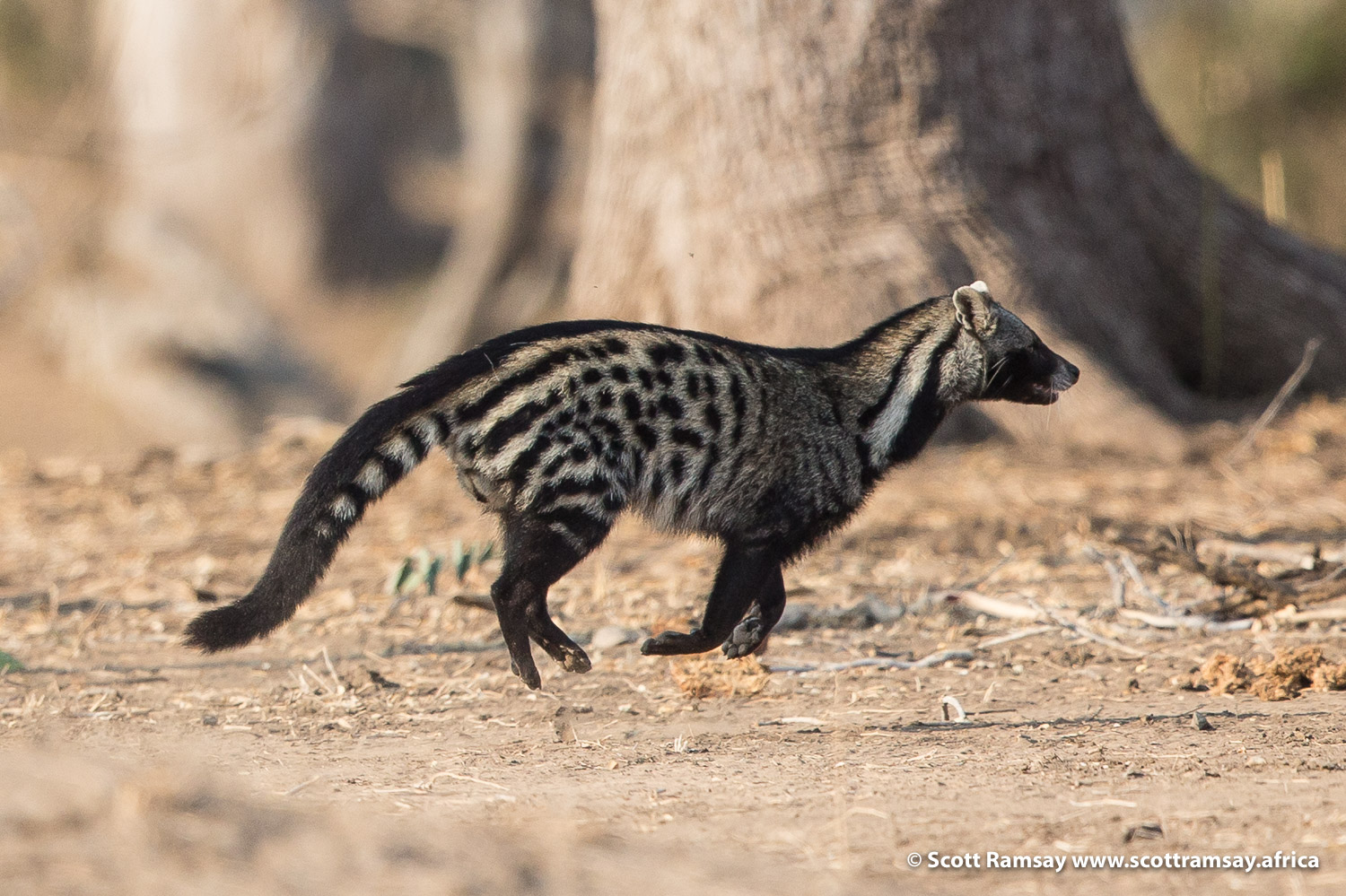 We spotted this civet cat one morning...usually nocturnal, they are sometimes seen during daylight in the cooler winter months. 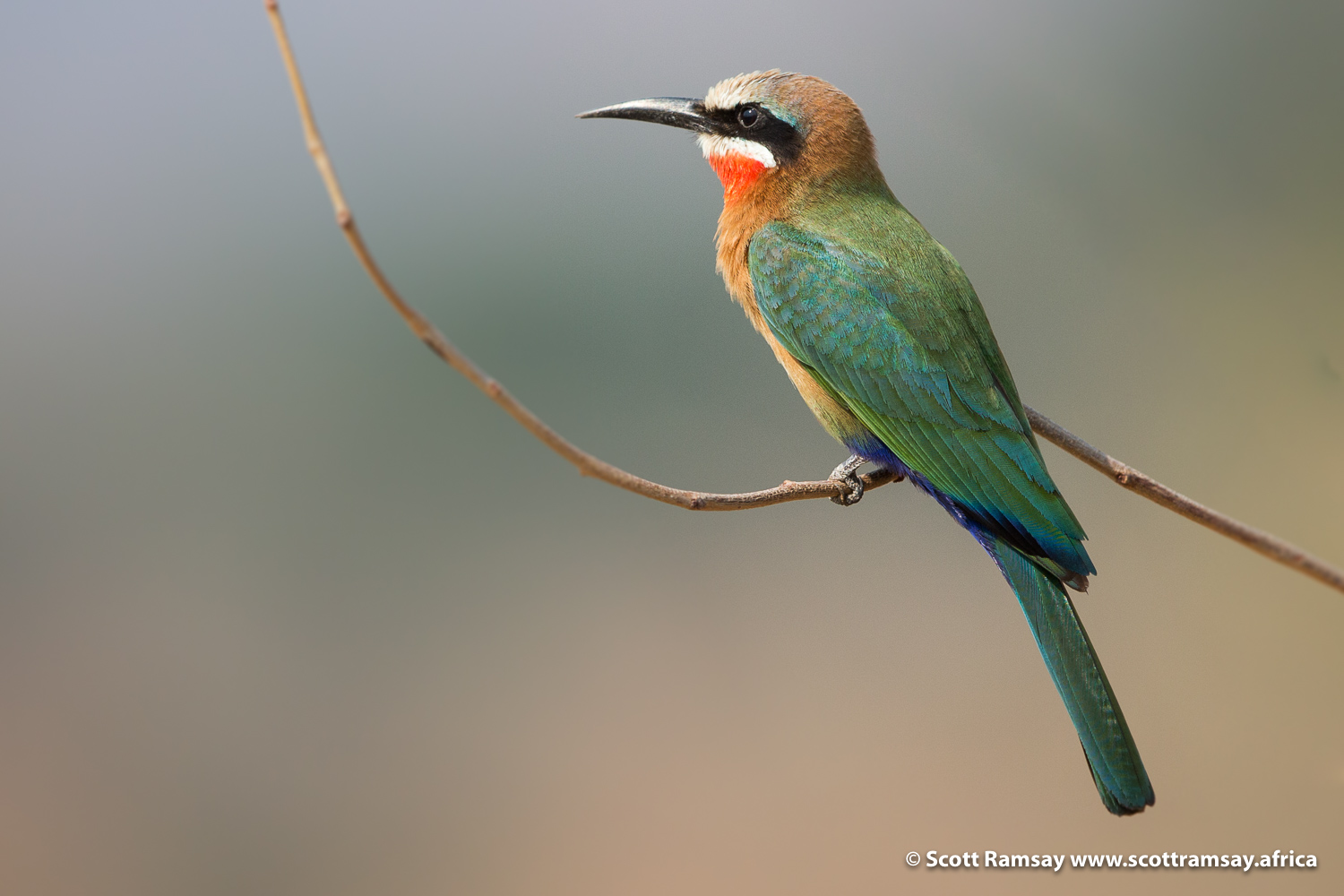 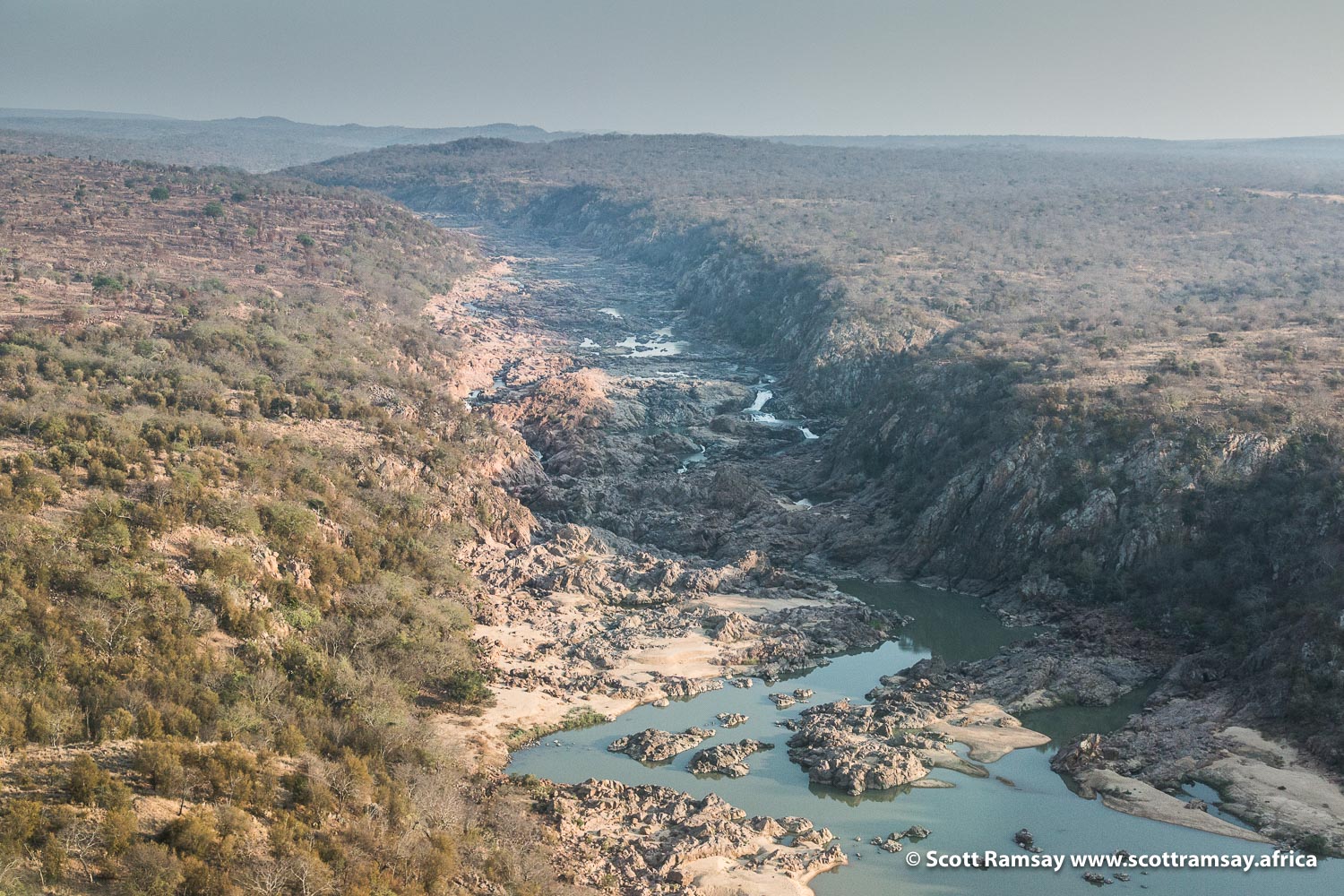 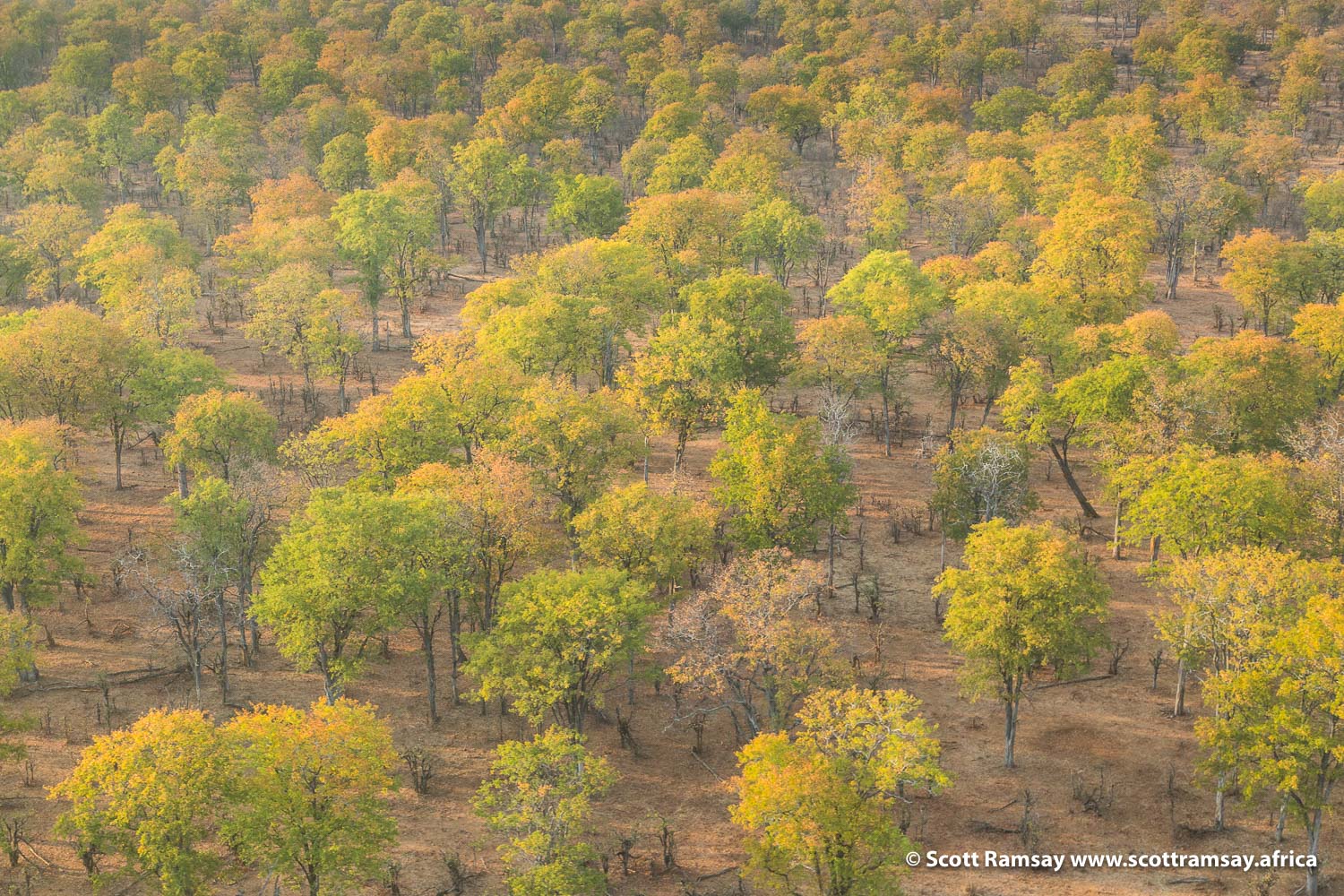 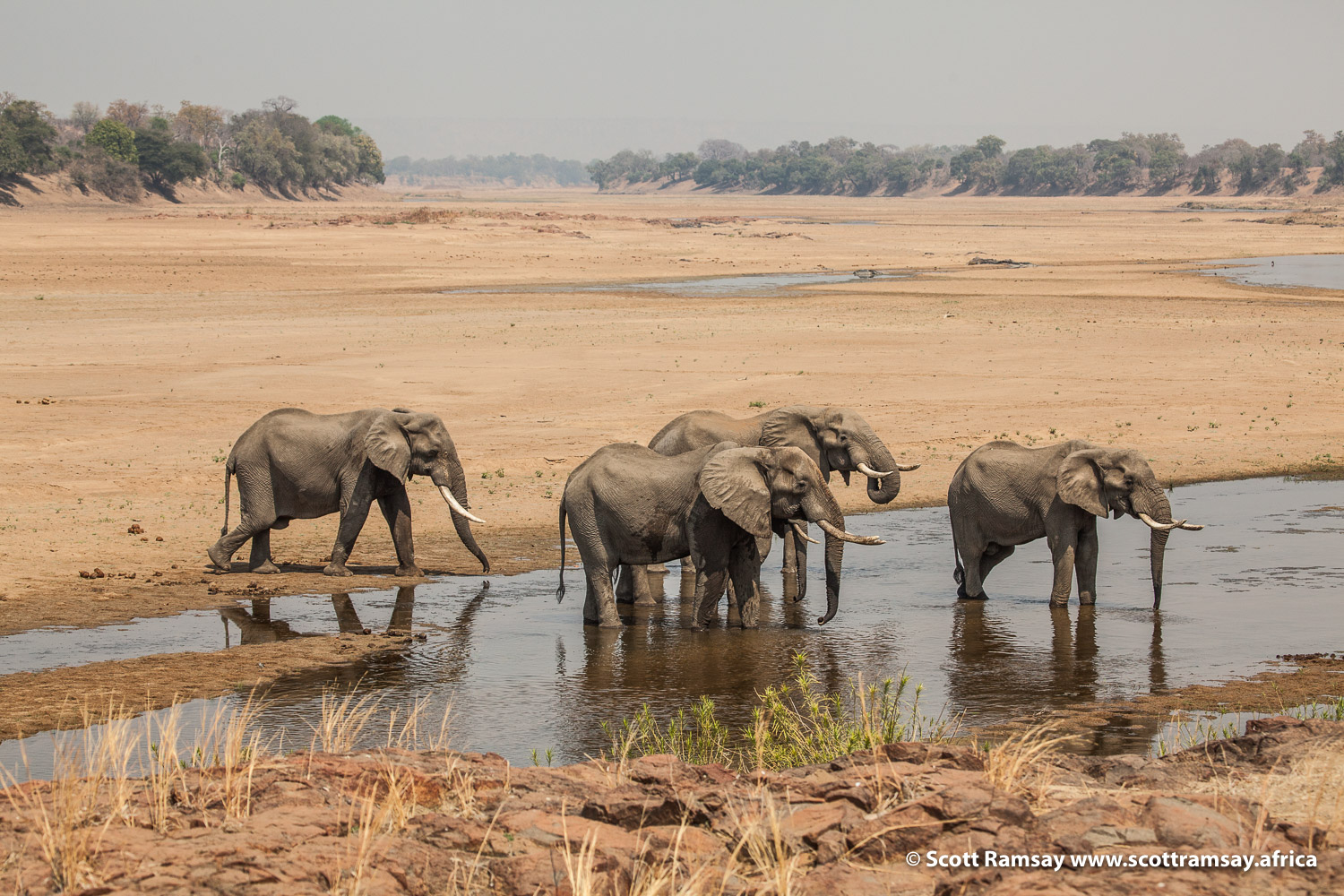 We watched these elephants from about 20 metres away, as they drank from the receding waters of the Runde River. 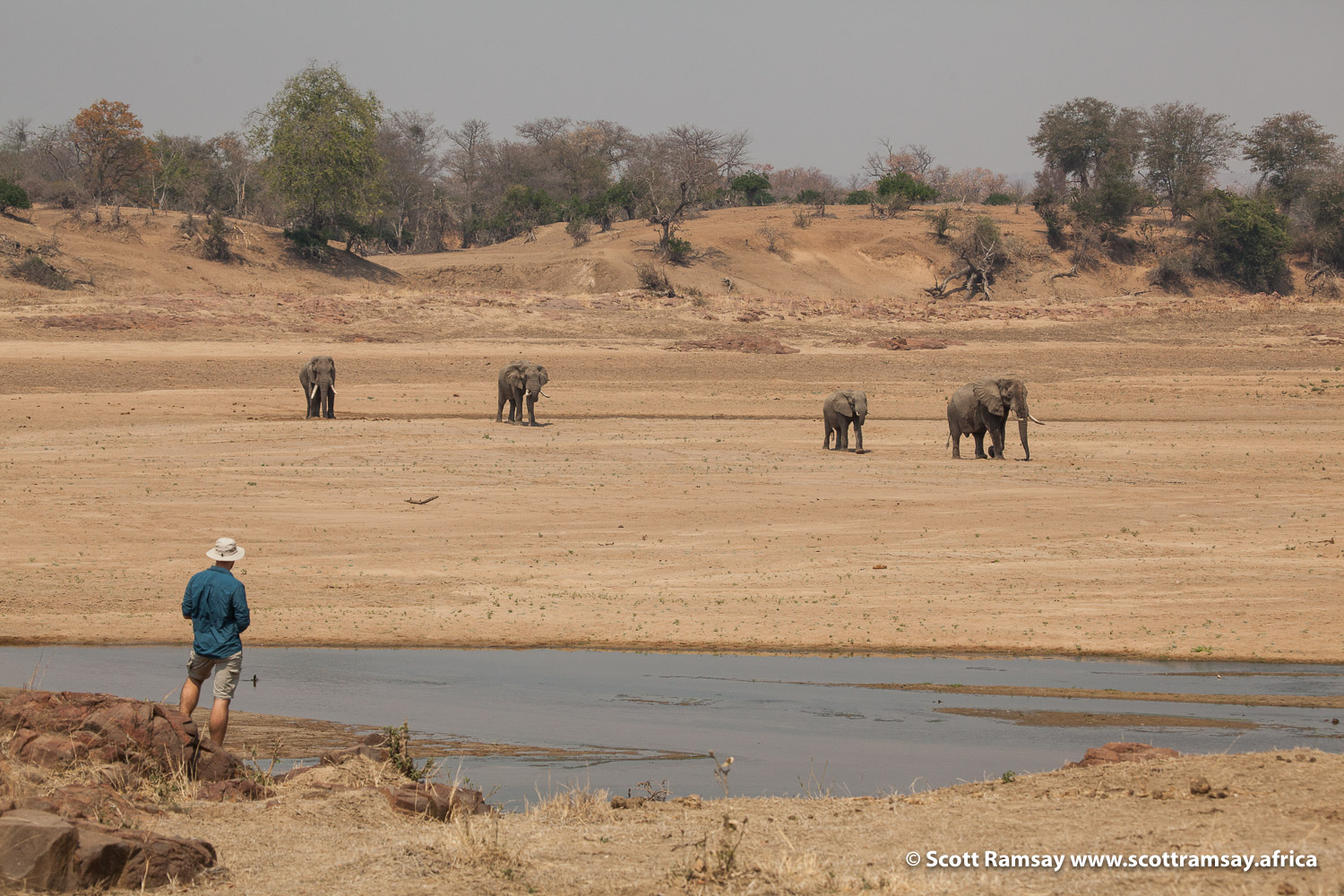 Unlike most other national parks in Southern Africa, Gonarezhou offers a sense of freedom and exclusivity that is still value for money, and has not yet been captured by the grabbing hands of luxury safari companies or mass tourism operators. 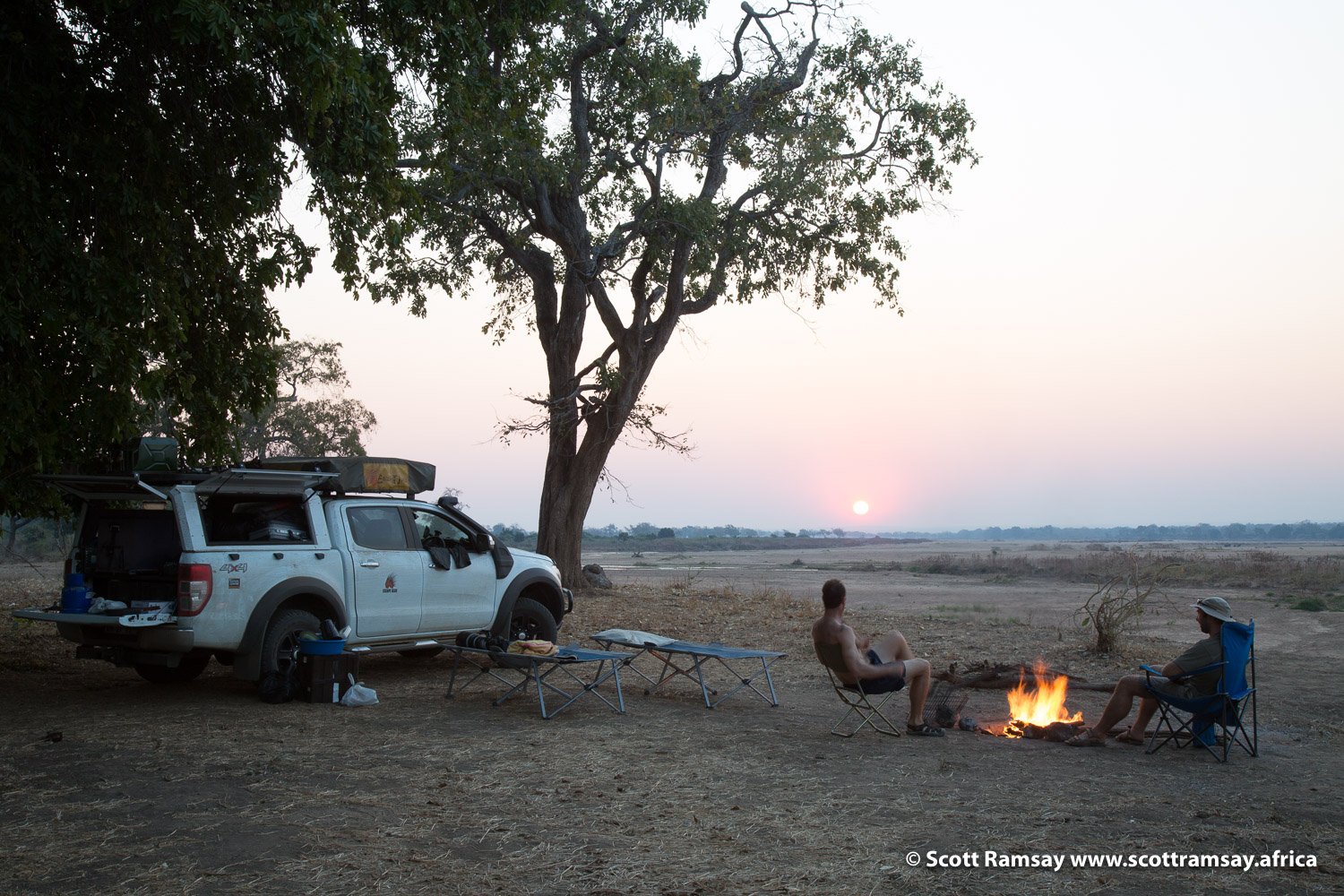 Chamuluvati Campsite, near the confluence of the Save and Runde Rivers in Gonarezhou 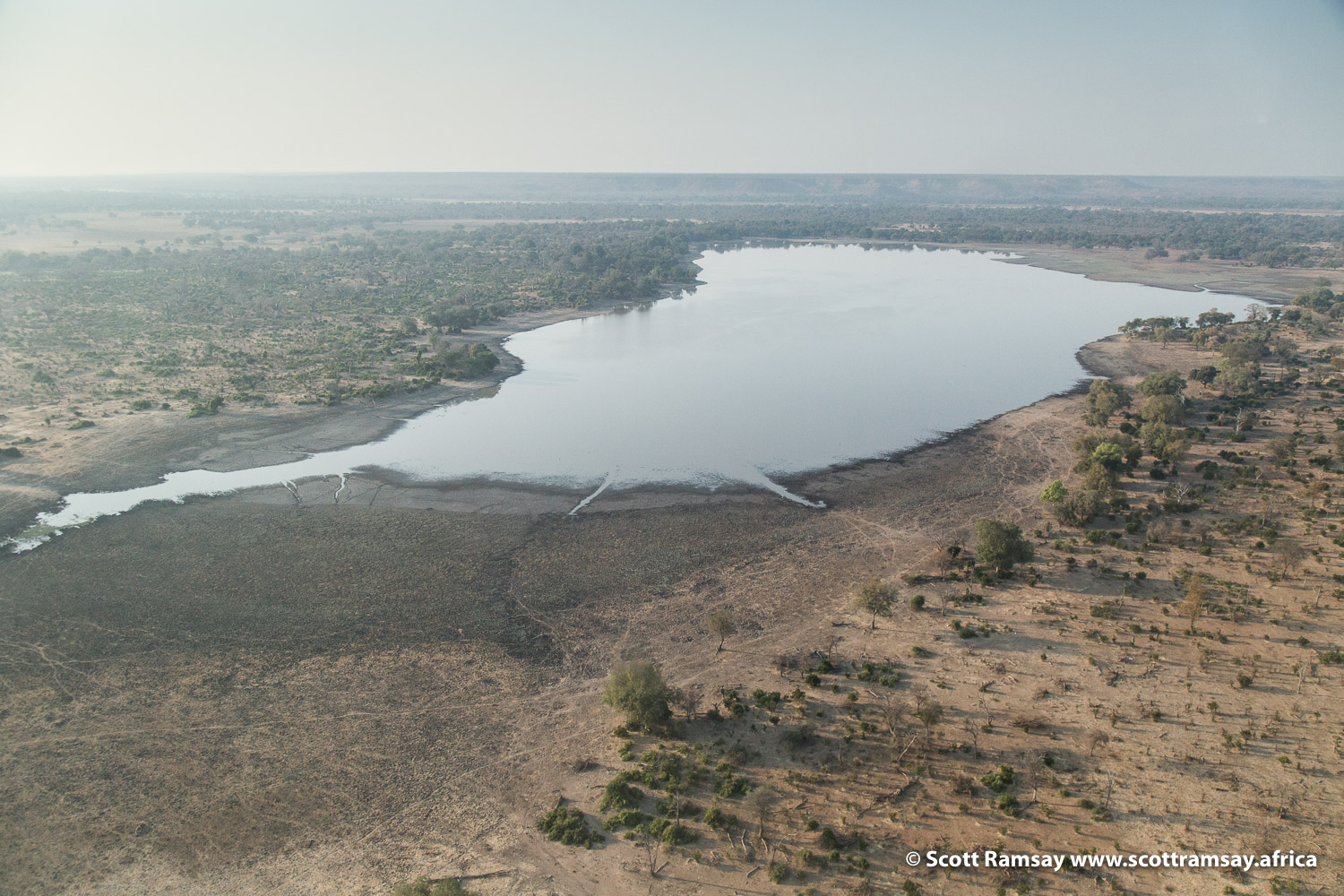 The large Tembwahata Pan lies near the confluence of the Save and Runde Rivers, and draws plenty of elephant, buffalo and other wildlife during the hot days. 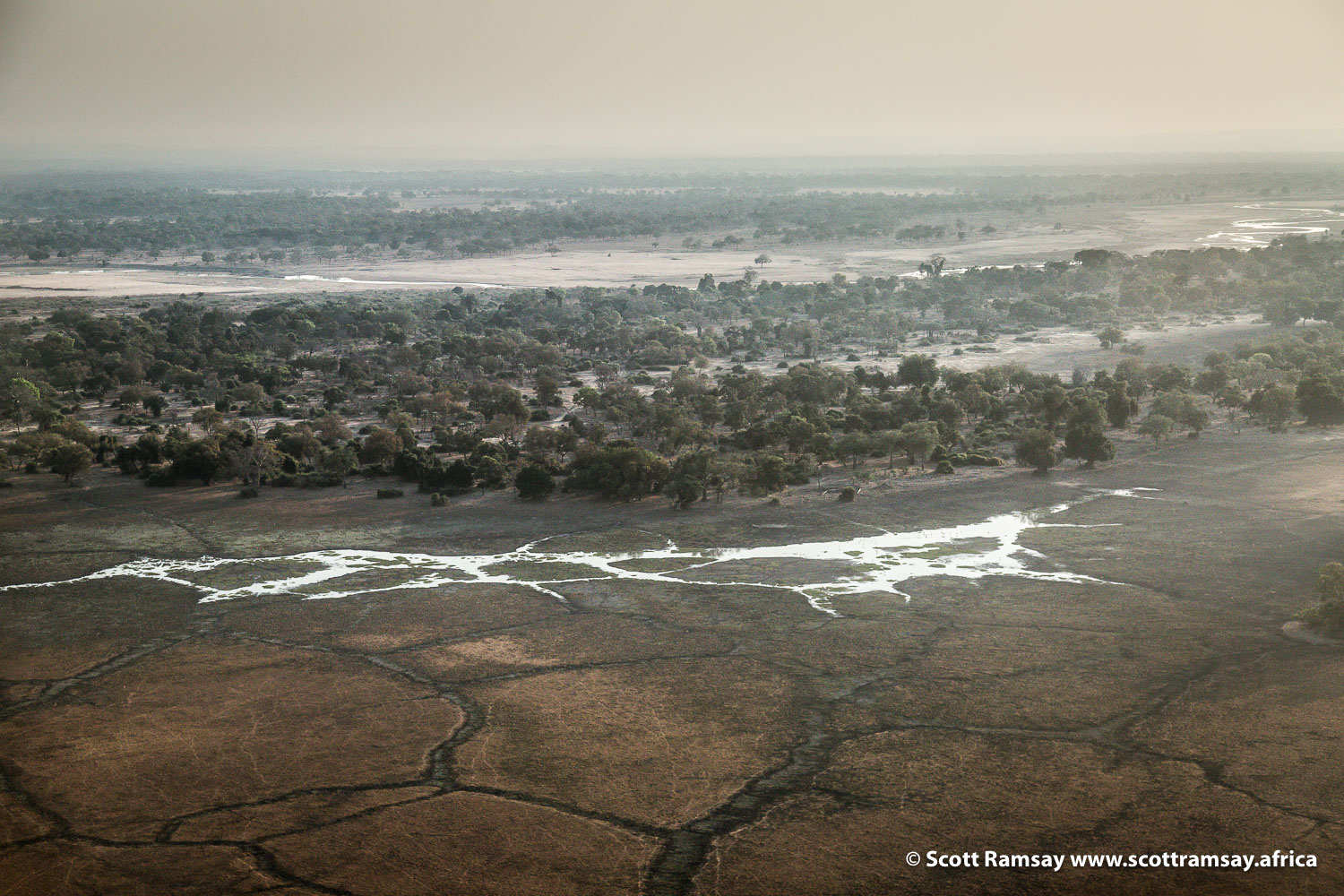 The smaller Machaniwa Pan is just a few hundred metres south of the Runde River, and is a great place for bird-watching. 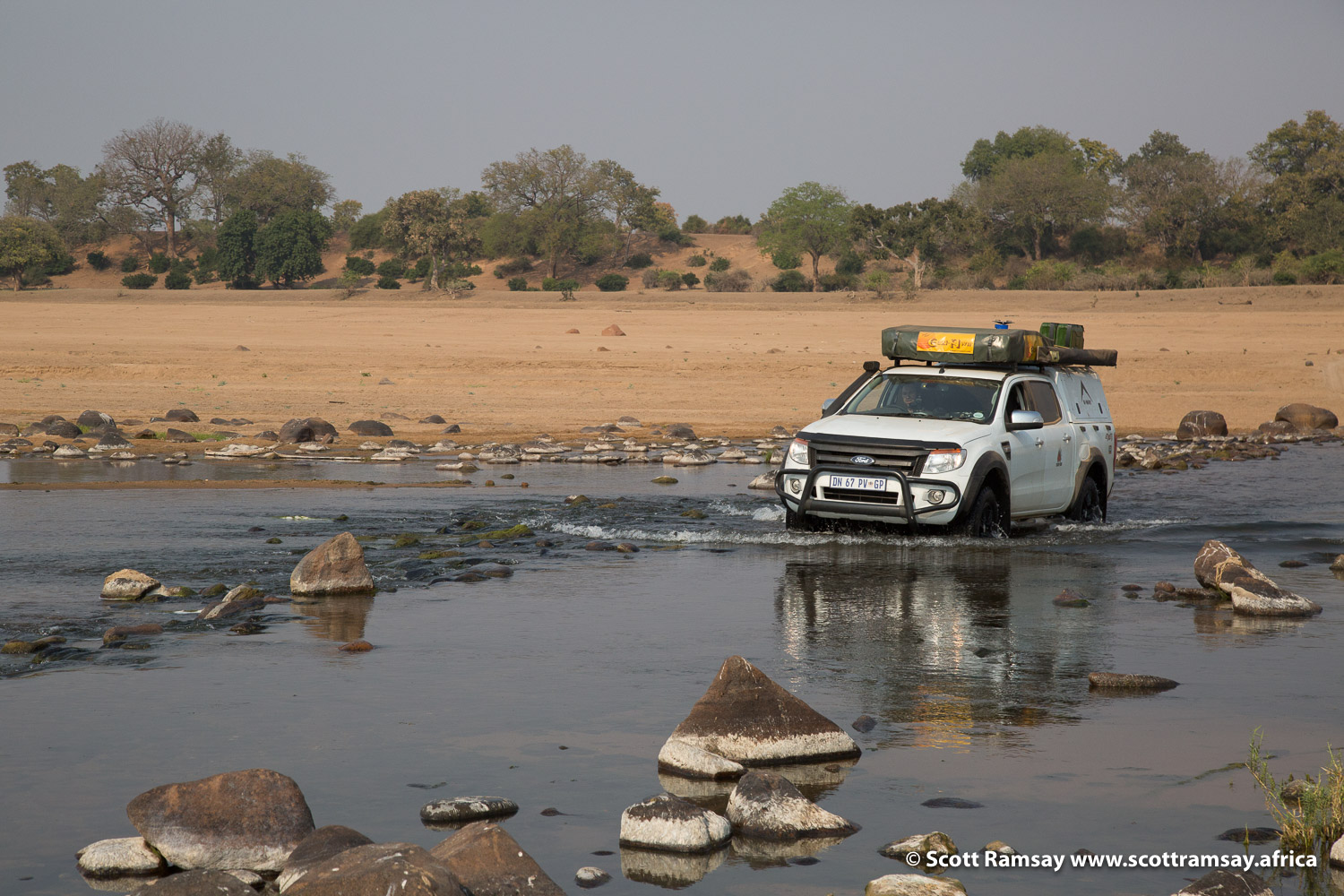 Crossing the Runde River on our way to our campsite at Hlaro. If you're going to come to Gonarezhou, you'll need your own fully-equipped 4x4, and a good level of 4x4 driving experience. Better still, come in a convoy with at least one other vehicle. 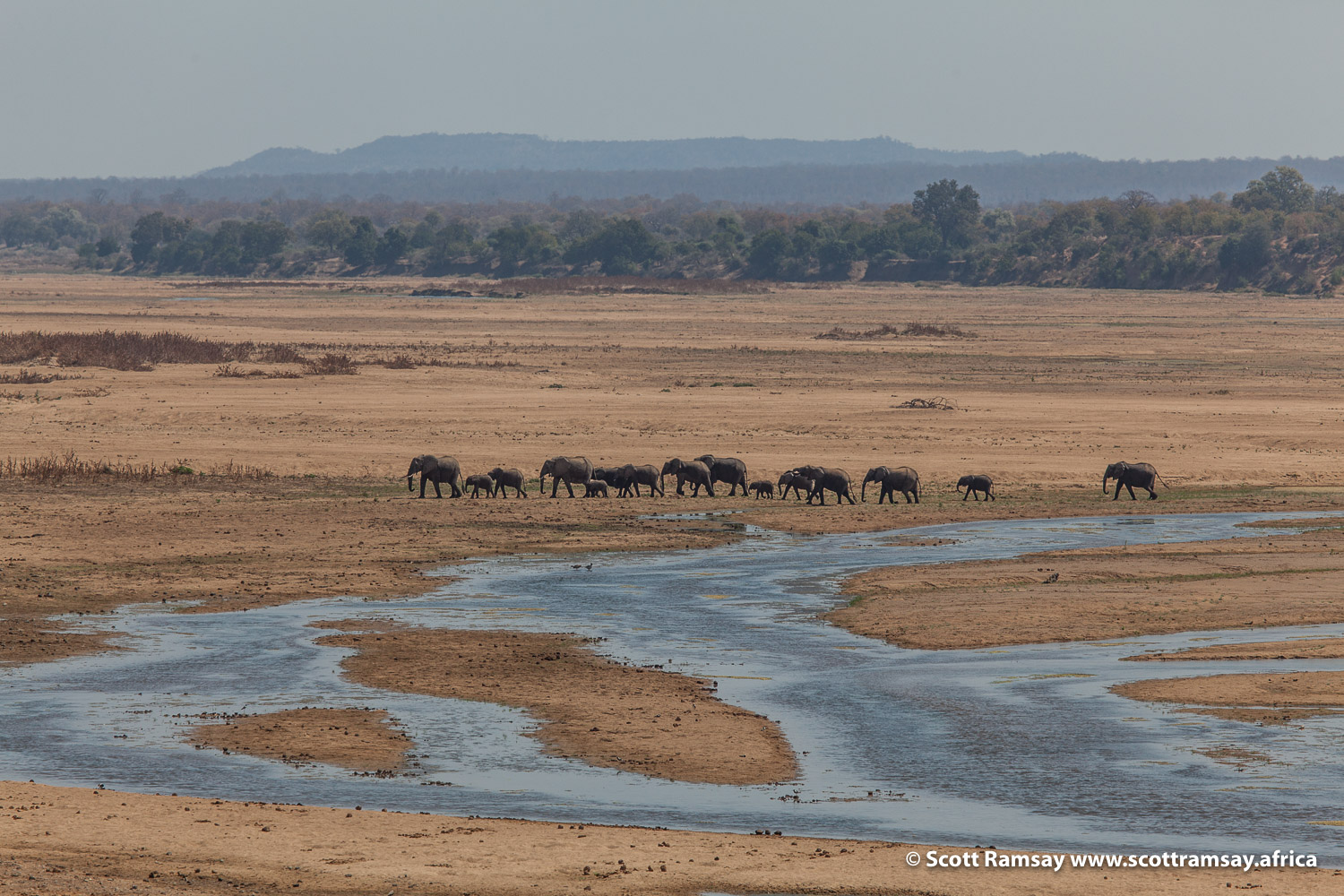 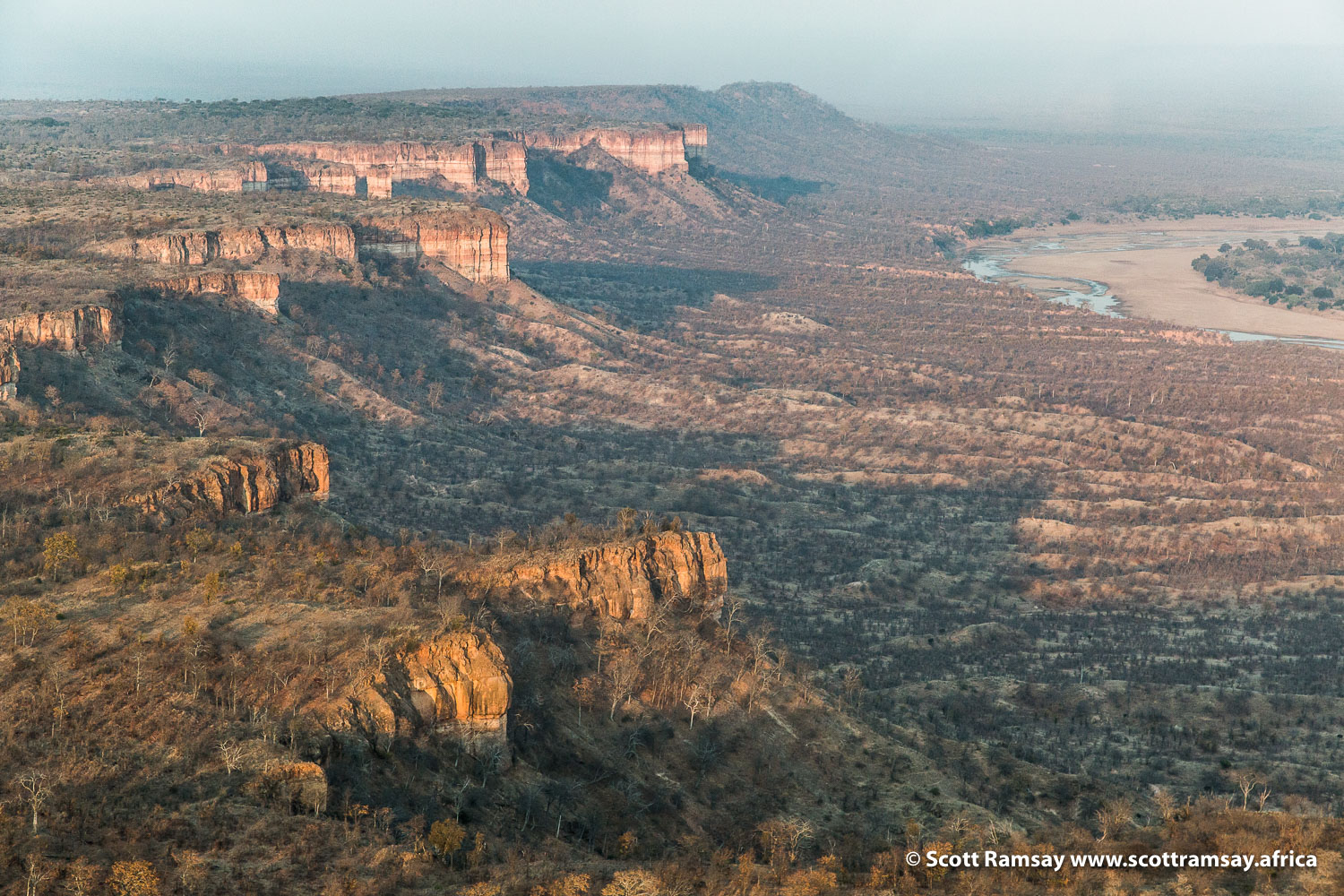 Chilojo Cliffs with Runde River below...what a beautiful wilderness. Gonarezhou is one of my favourite parks that I have visited in Africa. 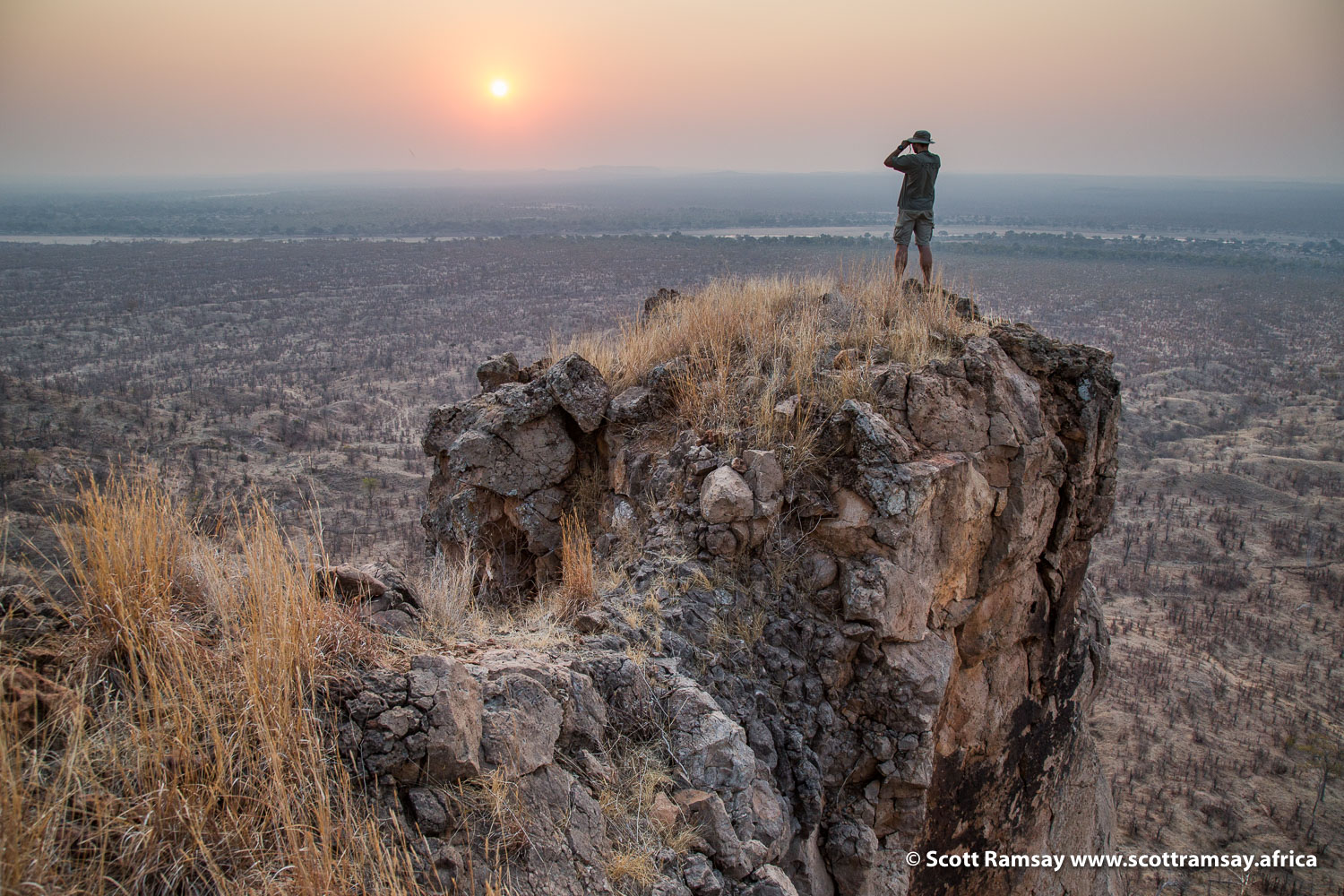 My friend Andy doing what he does best - scouting the terrain for that cold Zambezi Lager at the end of a long hot day. Looking out from the top of the Chilojo Cliffs at sunset. (They're in my fridge Andy).