Goukamma Nature Reserve lies between the towns of Sedgefield and Knysna on the Garden Route of the southern Cape coast. Stand out features include long, near-empty beaches, a well-managed marine protected area offshore, and a pretty estuary of the Goukamma River. The huge vegetated dunes make for great walking, while the fresh-water lake of Groenvlei is excellent for canoeing and bird-watching. This is a pretty and diverse protected area worthy of a weekend's exploring. 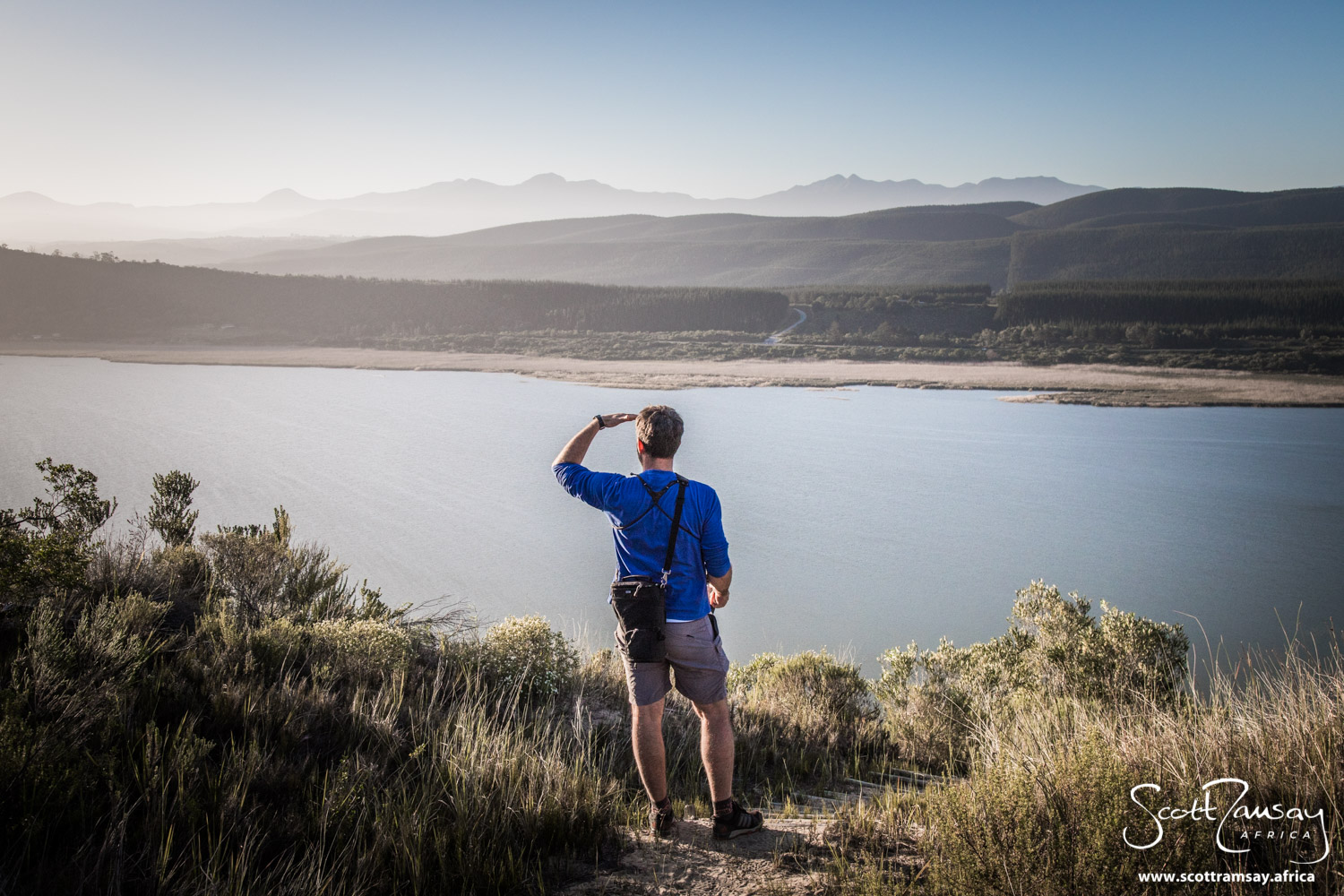 My friend Ian looking out over Groenvlei, the large inland freshwater lake at Goukamma that lies between the national N2 road and the extensive vegetated dune systems.

After visiting Robberg and Keurbooms Nature Reserves near Plettenberg Bay, we headed west to Goukamma, between the towns of Knysna and Sedgefield.

Most people who drive the national N2 between these towns will have passed the sizeable lake called Groenvlei, which perhaps unbeknown to them is part of Goukamma. The lake is one of only two closed freshwater lakes in South Africa, meaning there are no rivers into or out of the lake. It is fed entirely by rain and groundwater, according to current research.

The reserve extends from the lake near the N2 over several high vegetated dunes, and onto the beach on the southern side. There’s a marine protected area too, 14km along the coast and extending one nautical mile offshore.

This ocean reserve is important for commercial species fish like hake, red Steenbras and sole. Long-lived reef fishes like galjoen, red roman and musselcracker also find sanctuary here, although line-fishing from the shoreline is allowed with a permit.

In the western side of the reserve is the Goukamma River, about 17 kilometres long, although only the lower reaches – about 3kms – is in the reserve. Visitors enter the main gate of near the river mouth where it enters the Indian Ocean.

I last visited Goukamma about eight years ago, and was surprised to see the impacts of the large fire that swept the whole southern Cape three years ago.

Much of the diverse fynbos has been replaced by thick stands of invasive rooikrans and port Jackson, especially along the river banks near the entrance gate and office area. It was sad to see, but I’m sure CapeNature are doing everything they can to remove it and preserve the ecological integrity of the reserve.

For the first two nights we stayed at Otter’s Rest and Fish Eagle’s Nest, a double story cottage with great views over the river towards the estuary and beach. Both accommodations were really comfortable and well kitted out.  The large braai area and deck of Otter’s Rest has a fantastic view and atmosphere.

As soon as we arrived we headed across the Goukamma River in the little self-propelled dingy, and walked across the dunes towards the beach for a sunset walk.

The dunes are choked with invasive port Jackson and rooikrans, but the beach is spectacular. Extending for several kilometres in either direction, there was no-one else on it, except for several kelp gulls and black oystercatchers.

For me, Goukamma typifies so many of the CapeNature reserves, in that many of them could be consdered hidden gems. I get the feeling that they should be way more popular than they are, given their natural beauty and photogenic locations.

While reserves like Robberg and Kogelberg are well known, I’m always amazed that there aren’t MORE people enjoying some of the other provincial nature reserves like Goukamma.

(At the same time, I’m very happy that there aren’t always hundreds of people in all the reserves…surely the rest of wild nature has a moral – if not legal – right to its own space, free of intrusive, noisy humans?)

The next morning we took advantage of the beautiful weather to head up the river on canoes, supplied by CapeNature. The impressive Keurbooms River was fresh in our memories, and so we were somewhat disappointed as we paddled up the Goukamma River.

The huge veld fire of three years ago really did have a deleterious impact on the fynbos and milkwood trees. And in their place has emerged the invasive vegetation en masse. It will take time and effort to restore this part of the reserve to its former glory.

Further upstream, we came across a block of relatively unscathed milkwood and fynbos, and there was an immediate resurgence of birdlife.

Fish eagles, marsh harriers, Knysna loeries and several malachite kingfishers kept us company. The reserve birdlist numbers 243, of which 13 are considered threatened. The Knysna woodpecker is the one to long out for: apparently it is the most abundant of these rare birds.

We spent the rest of the day exploring the beach side of the reserve, and chilling on the deck at Otter’s Rest, enjoying the late afternoon winter sun.

The next two days were spent on the Groenvlei side of the reserve, where we stayed at Mvubu Bush Lodge, a very different kind of accommodation to Otter’s Rest, but as pleasant in its own way. Located on the bank of the lake, in among the milkwood forest and fynbos, Mvubu is cosy and secluded.

Behind Mvubu is the start of the huge vegetated sand dunes, and I’d highly recommend a walk on the path up to the top of the dune to watch the sunset. It’s not an overly tough walk, and if you go slowly it should take you about an hour.

The hilltop position on top of the dune gives superb views of the lake and the Outeniqua mountains, turning around, to the ocean on the other side. Look out for the vervet monkeys in the milkwood forest on the way!

When I last visited Groenvlei, I spotted a Cape clawless otter, so keep your eyes peeled for one! On this trip, I met up with the very helpful marine ranger Wayne Meyer, who told me that Groenvlei has an overpopulation of carp fish currently (they’re not sure why exactly, but they’re on it…). With all the carp around, the otters should be thriving.

The lake is home to two small indigenous fish species: the estuarine round herring, and the Cape silverside. Studies have shown that both these species have evolved uniquely in Groenvlei, due to the lake’s isolation from other water bodies. Because of the high numbers of alien fish, especially carp and bass, these little local fish are hanging on for survival in the lake.

Because we are “bush” people, we all loved staying at Mvubu. The rustic, yet comfortable, style of the lodge suited us perfectly. means “hippo” in Xhosa, so that added to its lustre in our minds. We just wished there were still hippos in Groenvlei! (Presumably they were shot out by colonial hunters a few hundred years ago).

The view over the lake from Mvubu was super, and because it faces north, the lodge is nice and warm in winter (unlike Otter’s Rest which was a big chilly during the day, because it faces south).

The only detraction from Mvubu was the noise of the national N2 road across the lake, which even though it must be over a kilometer away, was pretty noisy.

We left Goukamma impressed by the three reserves we had visited (the others being Robberg and Keurbooms).

All of them are relatively small compared to South Africa’s larger reserves, but they each are unique in their atmosphere, landscapes and attractions. Importantly too, they have an air of exclusivity about them. Accommodation options are limited, but that’s what makes them so special, I think, because you often feel like you have the whole reserve to yourself.

If you’ve got two weeks on the Garden Route, then combining all three reserves will give you a fantastic array of experiences. I would love to go back to all three again, and spend more time photographing in them. 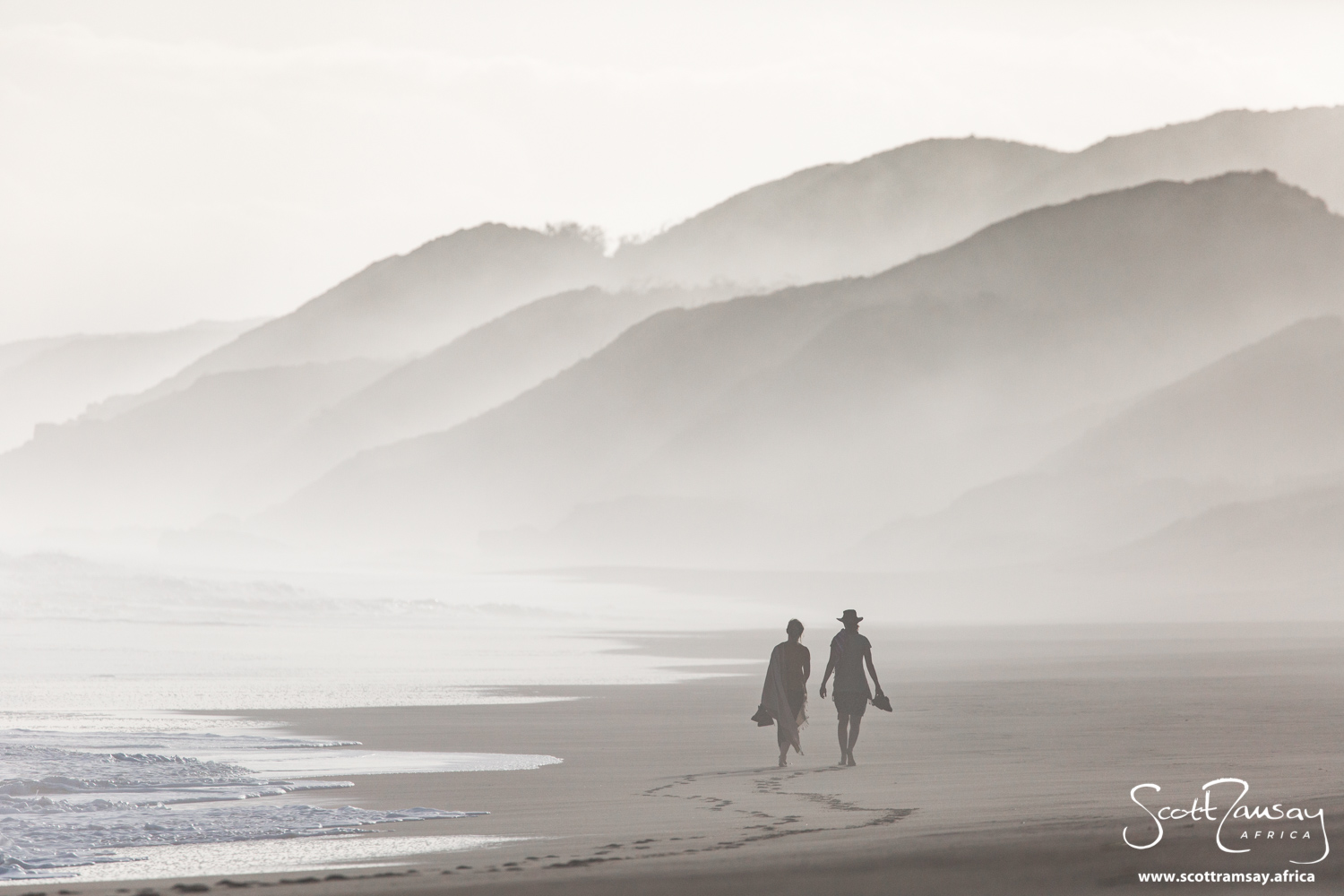 Joni and Helen walking along the ocean shoreline of Goukamma, with the high vegetated dunes in the background 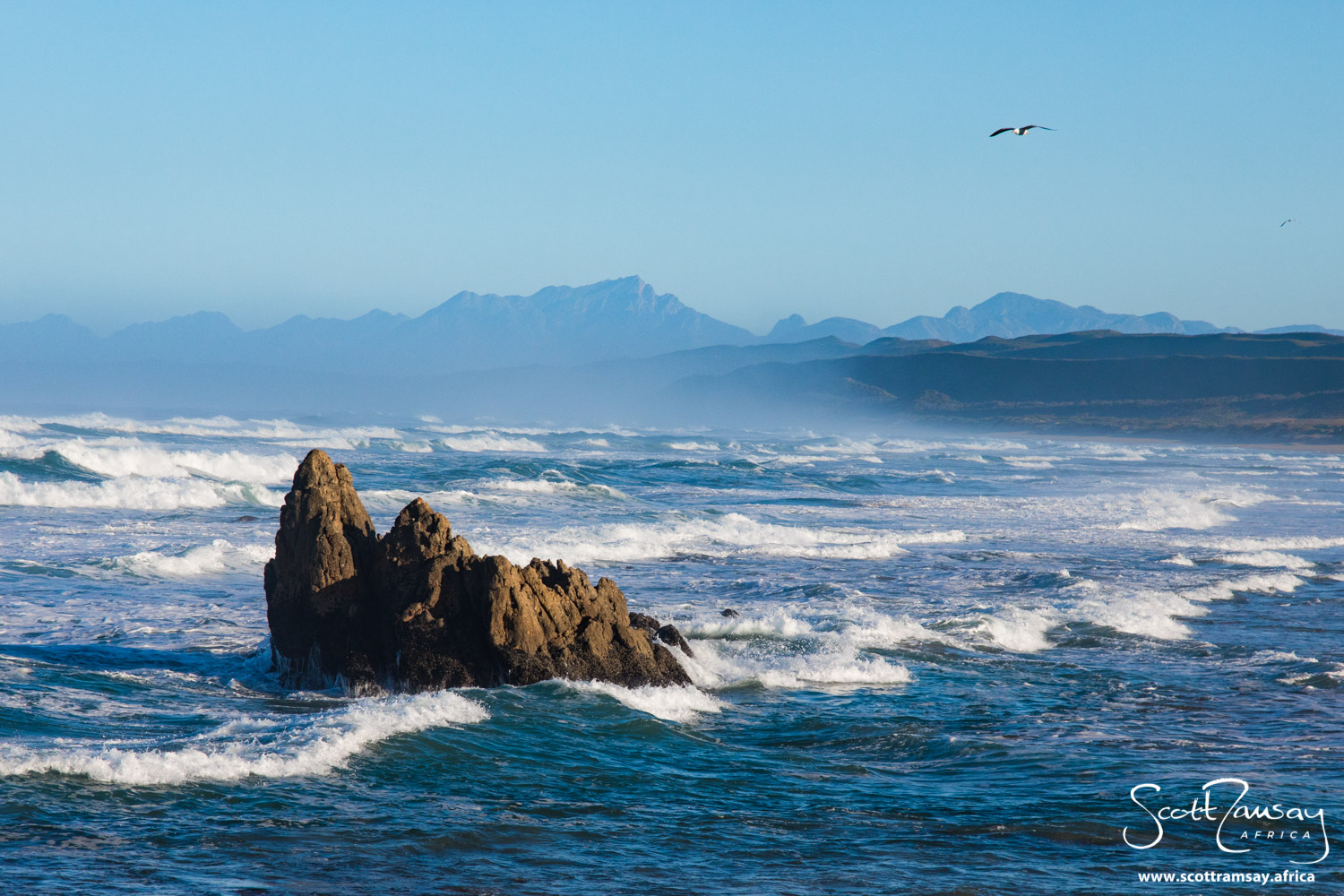 The marine protected area offshore of Goukamma isn't a pure no-take zone. Some linefishing is allowed, but for the most, it's a relatively pristine stretch of shoreline. 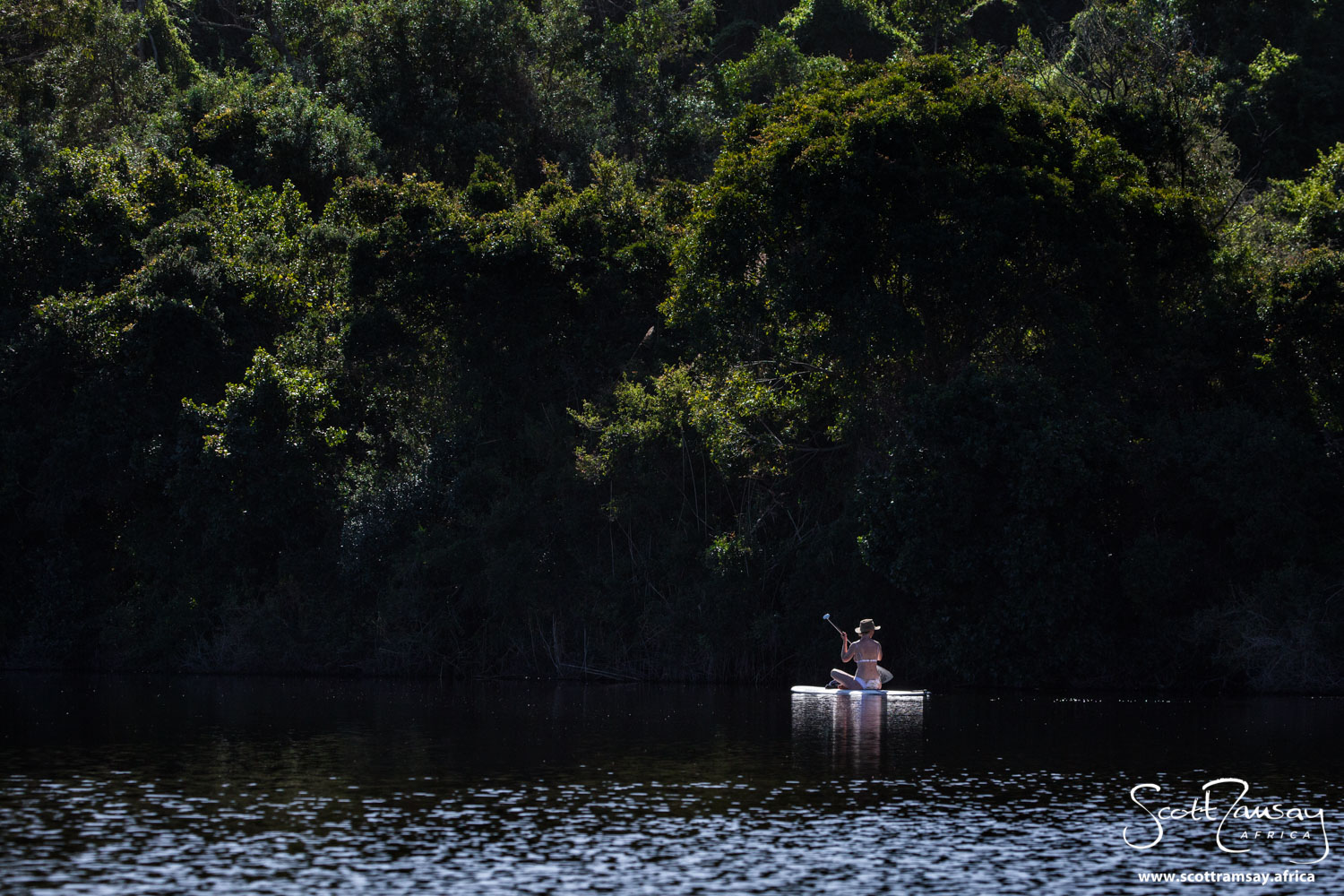 Joni paddling the Goukamma River upstream from the estuary. There are pockets of indigenous forest remaining, but also large tracts of transformed, agricultural land adjacent to the reserve. 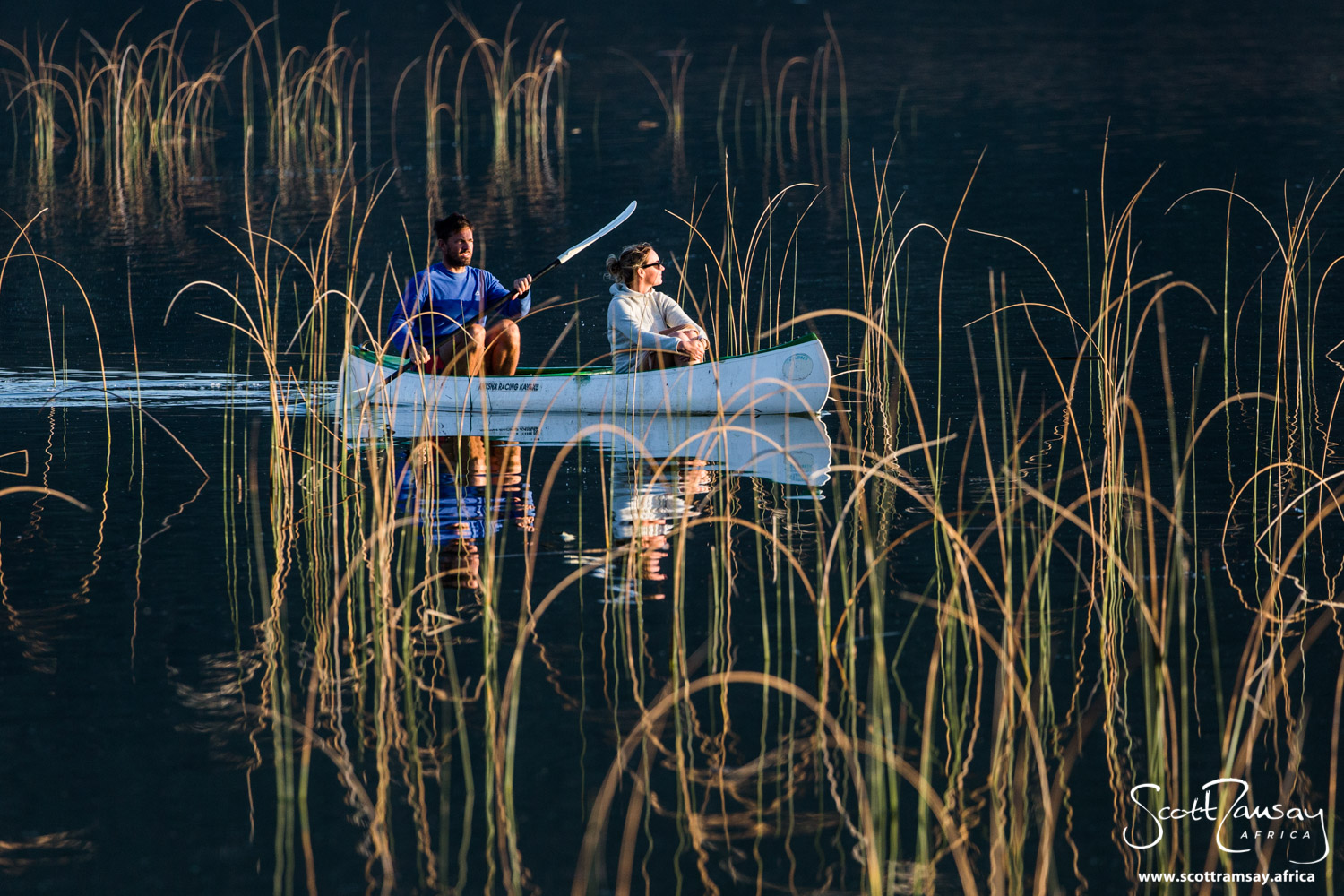 Joni and Ian paddling on Groenvlei in the early morning. 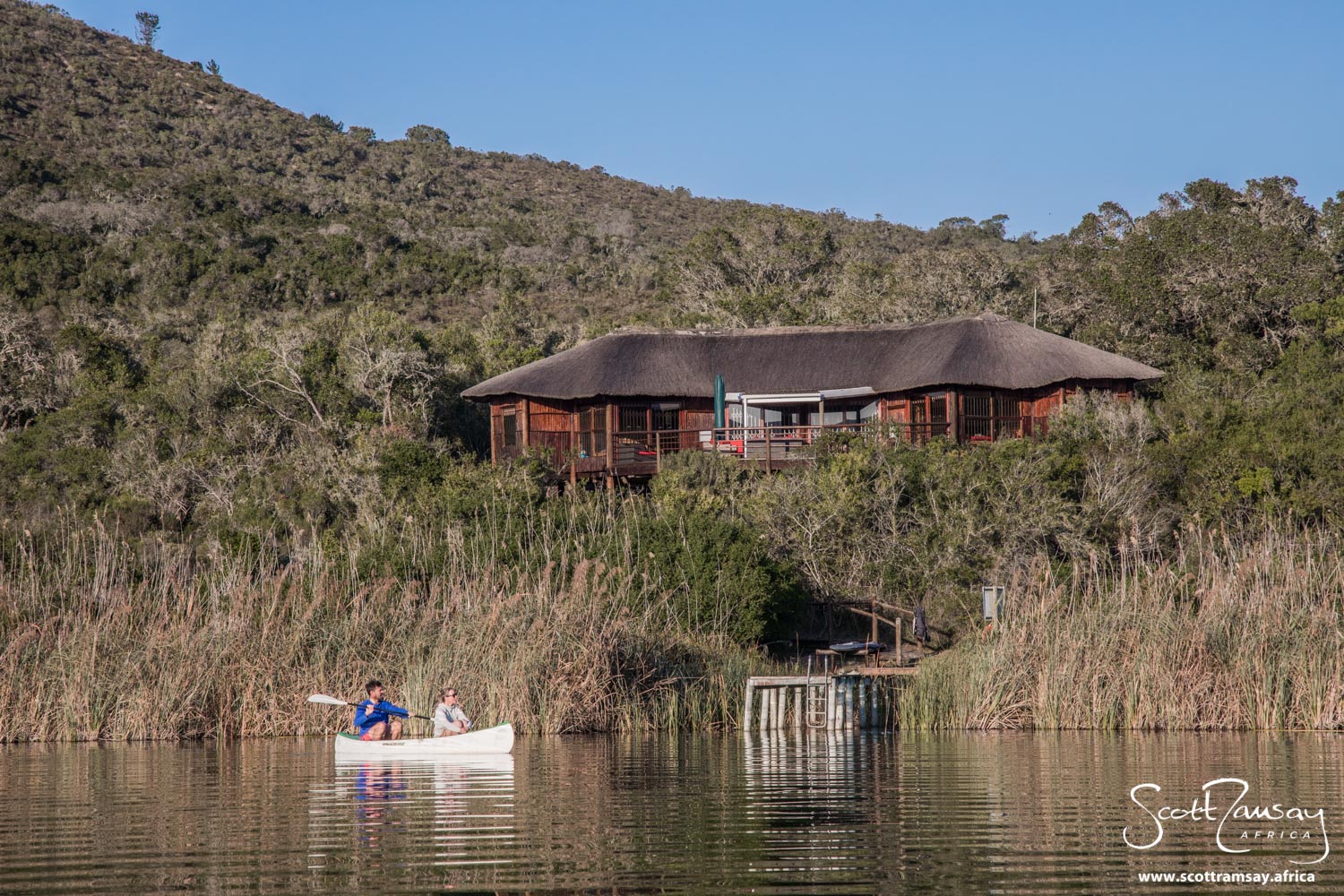 Mvubu Lodge is on the edge of Groenvlei, and is a fantastic place to base yourself to explore the northern side of Goukamma. Although the noise of the N2 traffic is obvious during the day, at night it does lessen somewhat. 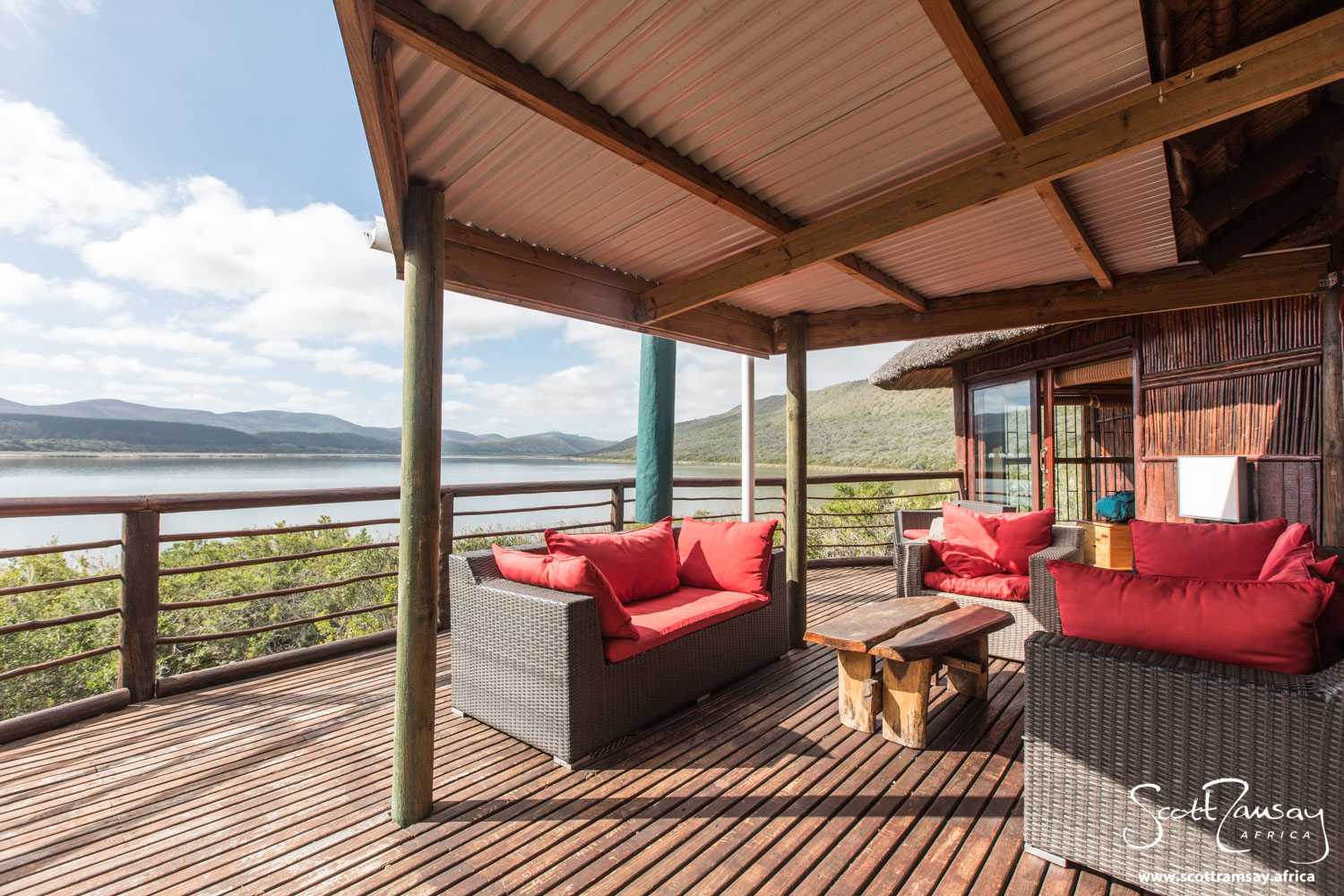 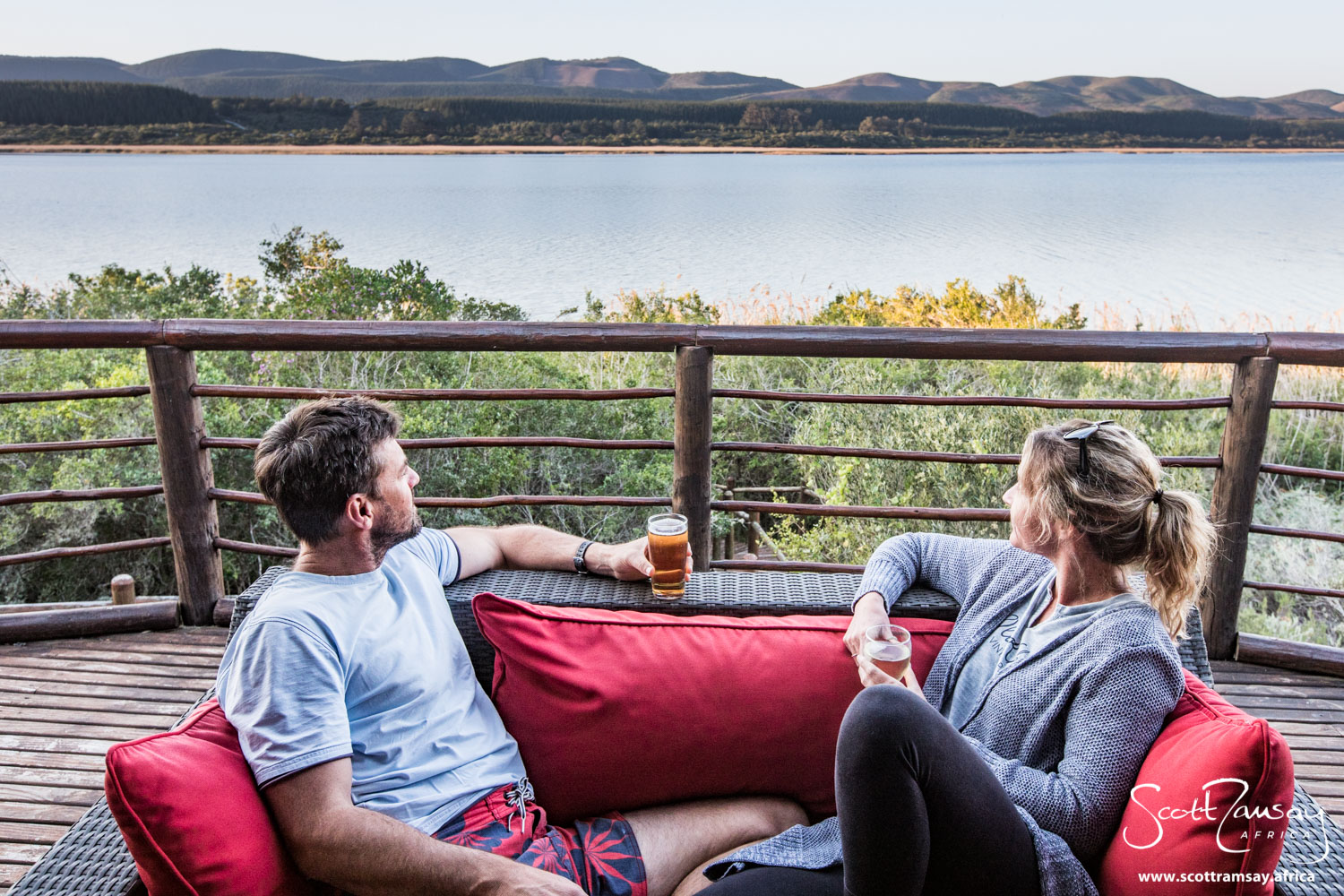 Joni and Ian enjoying a sundowner on the deck at Mvubu Lodge, overlooking Groenvlei 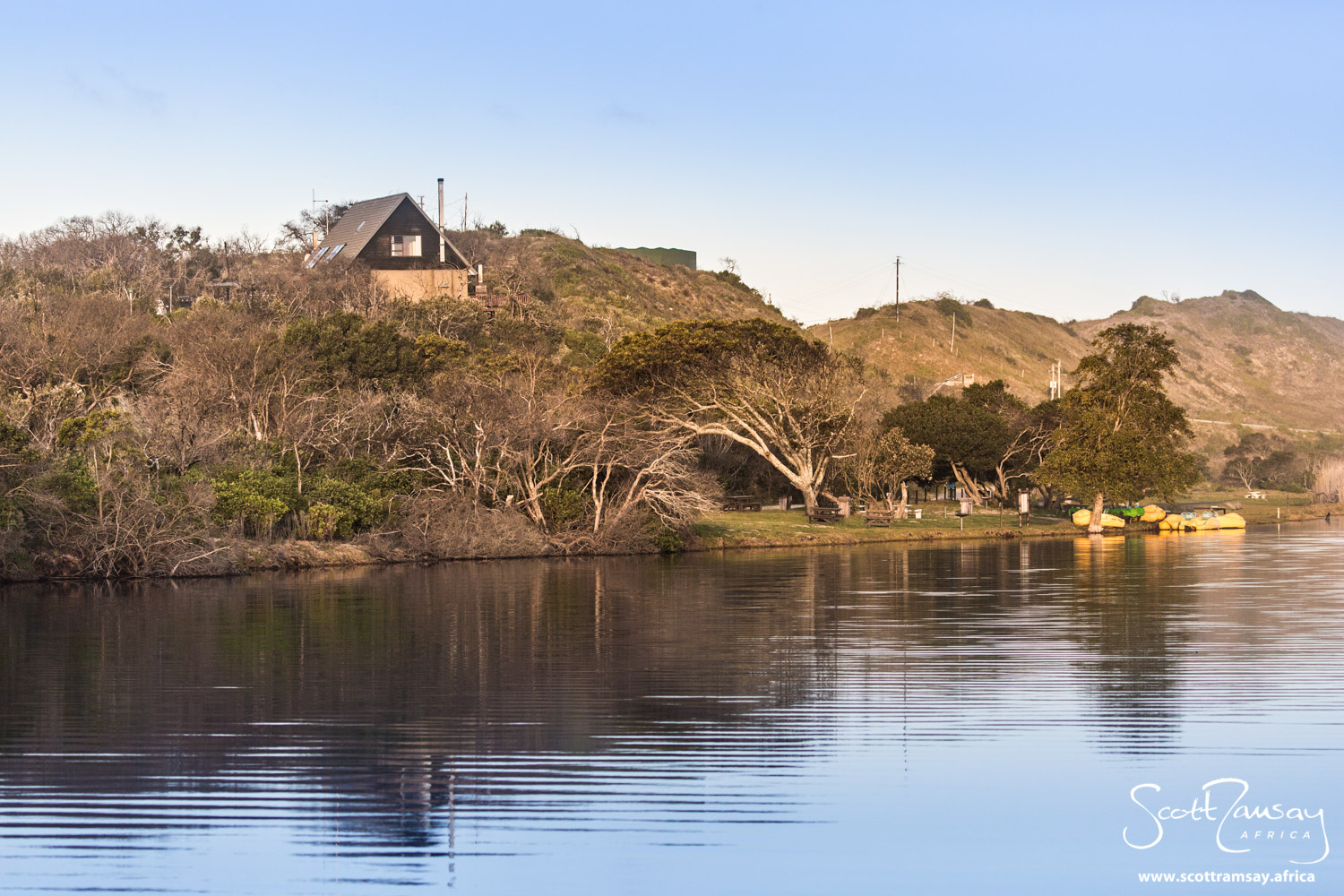 On the coastal side of Goukamma is Fish Eagle's Loft and Otter's Rest, a double-storey accommodation complex overlooking the estuary and coastline. It's a beautiful location, but because it faces south in winter, it feels particularly cold. Summer's would be a far better time to stay here probably. 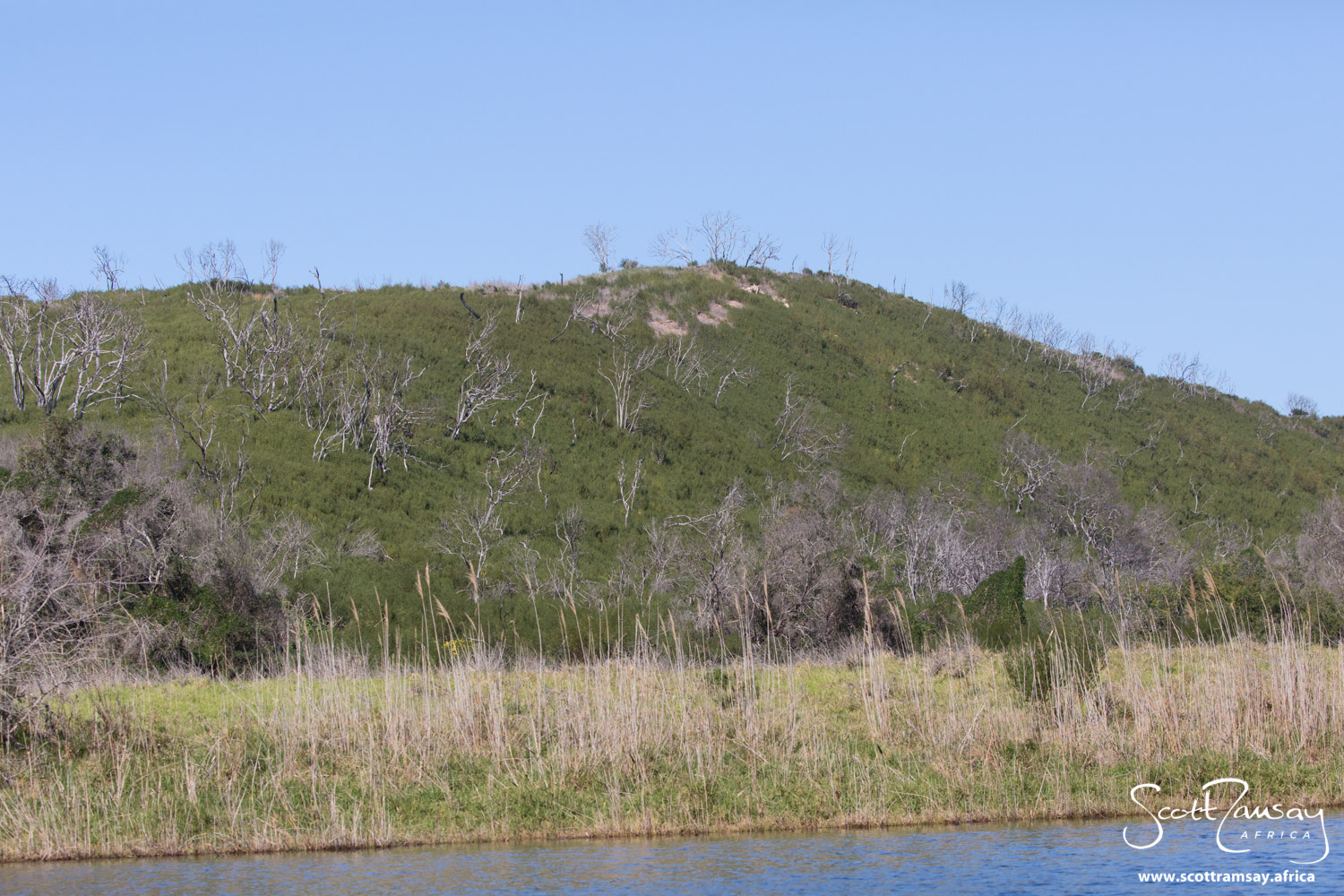 The extensive fire damage from a few year's previously. Invasive, non-indigenous rooikrans and port jackson have taken over big chunks of the reserve. Let's hope CapeNature are planning to do some clearing. 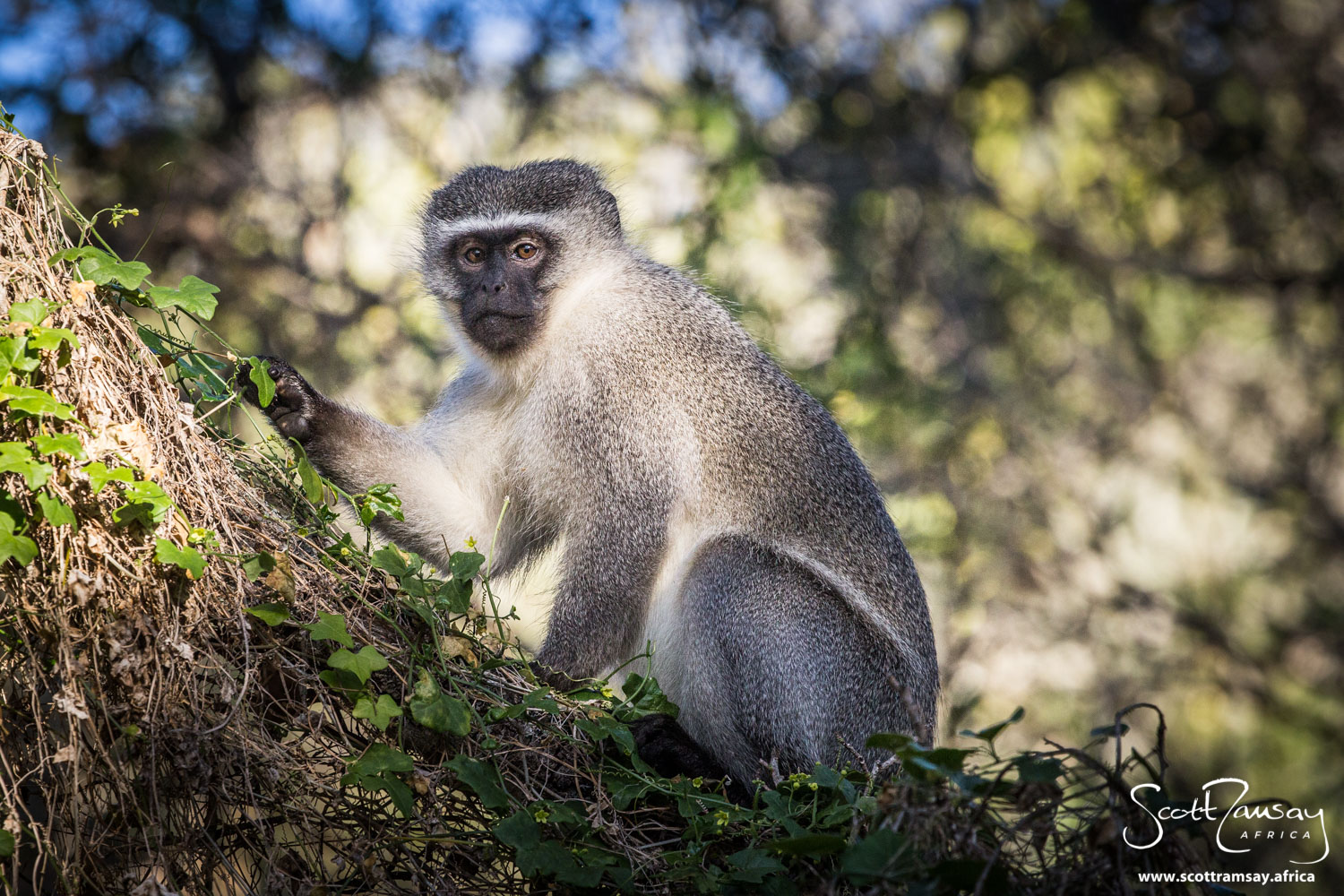 Vervet monkey in the milkwood forest on the edge of Groenvlei 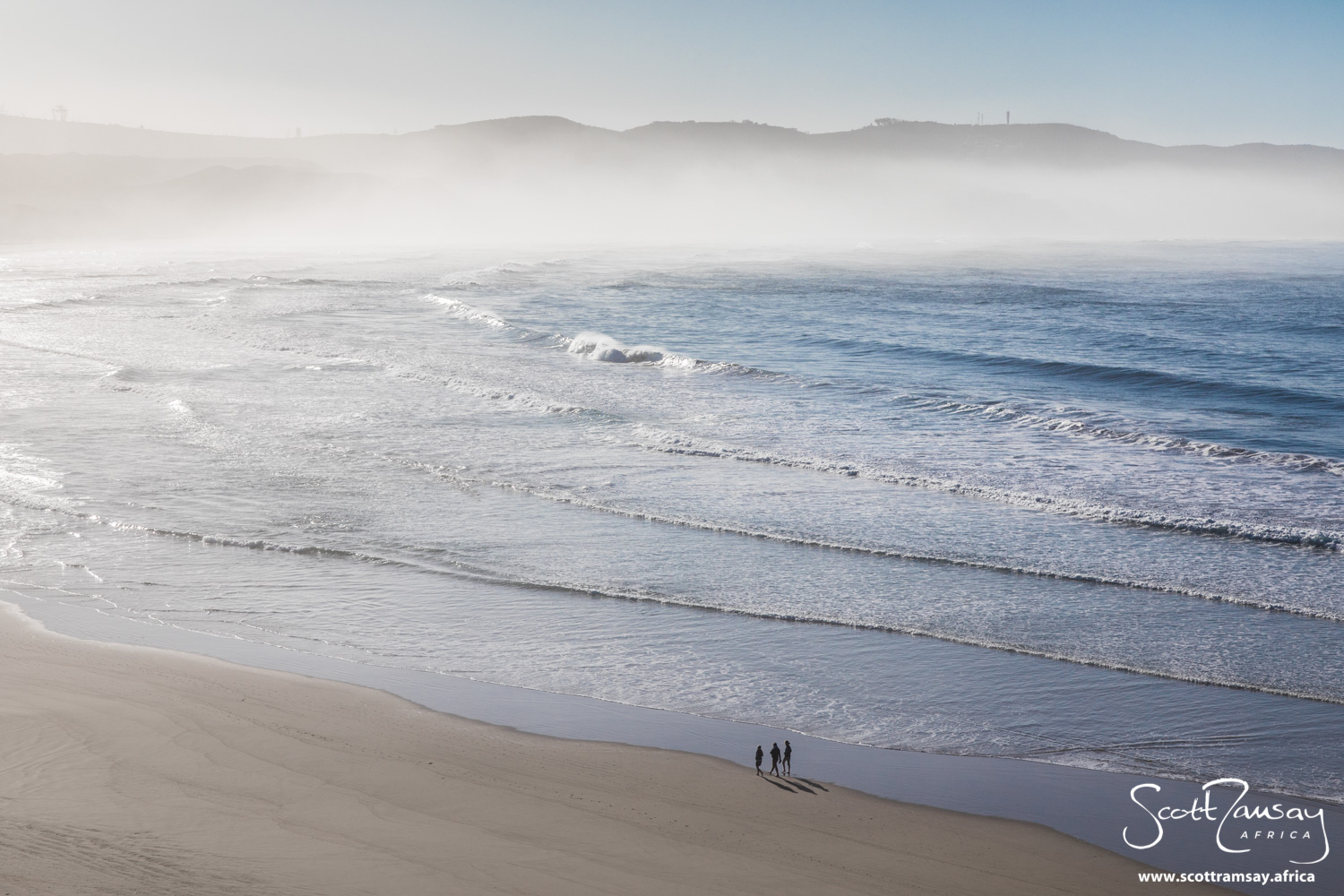 The reserve extends all the way to Buffel's Bay in the east. 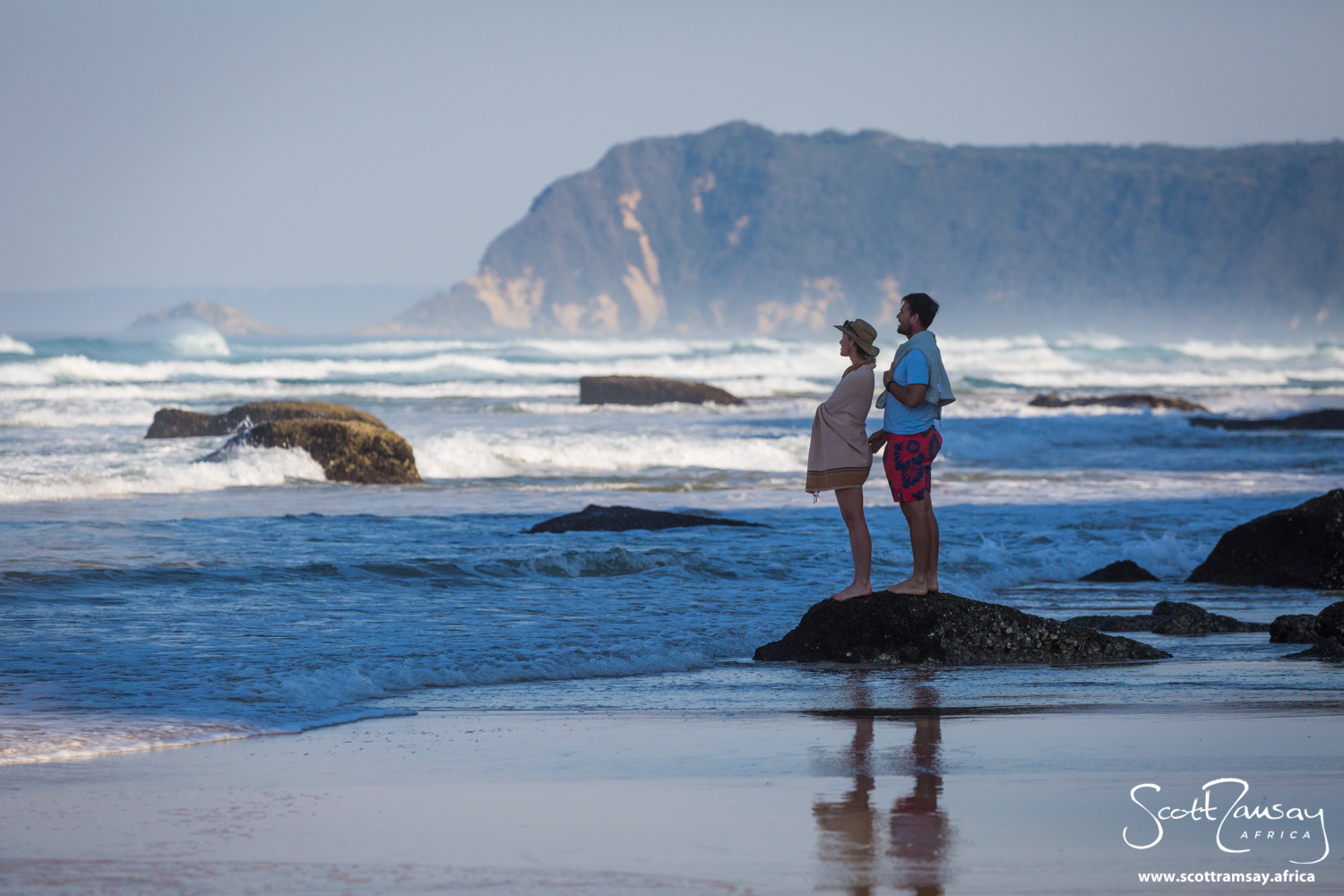 Ian and Joni on the beach of Goukamma 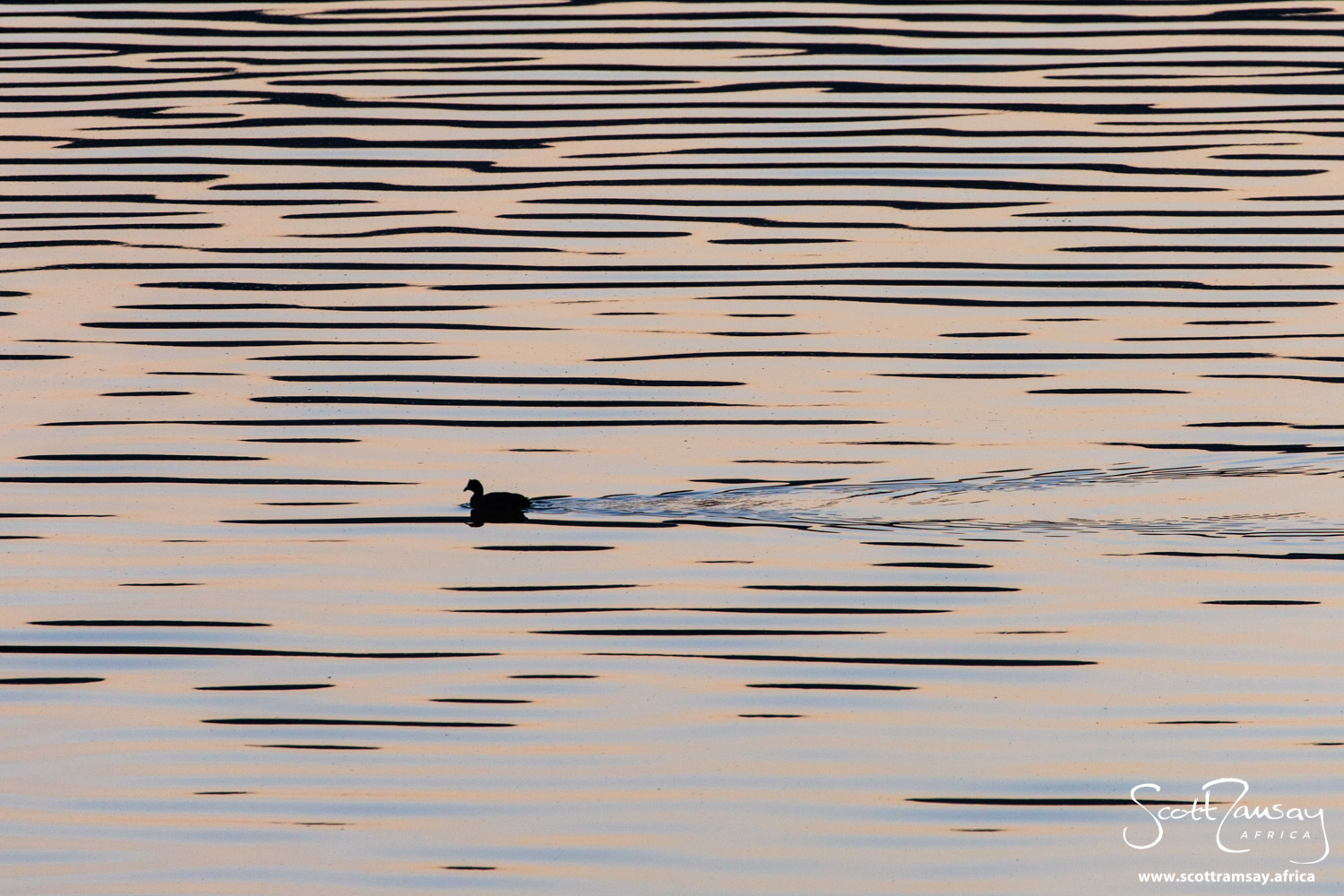