Keurbooms River Nature Reserve is another small reserve near Plettenberg Bay, and despite it's proximity to the busy town, once you've paddled up the river away from the national road, it soons becomes clear that this reserve is another tiny patch of paradise in the Western Cape. Ancient yellow-wood trees line the dark river waters, fish eagles soar overhead, and Knysna turacos flash their crimson wings against the verdant green forest. 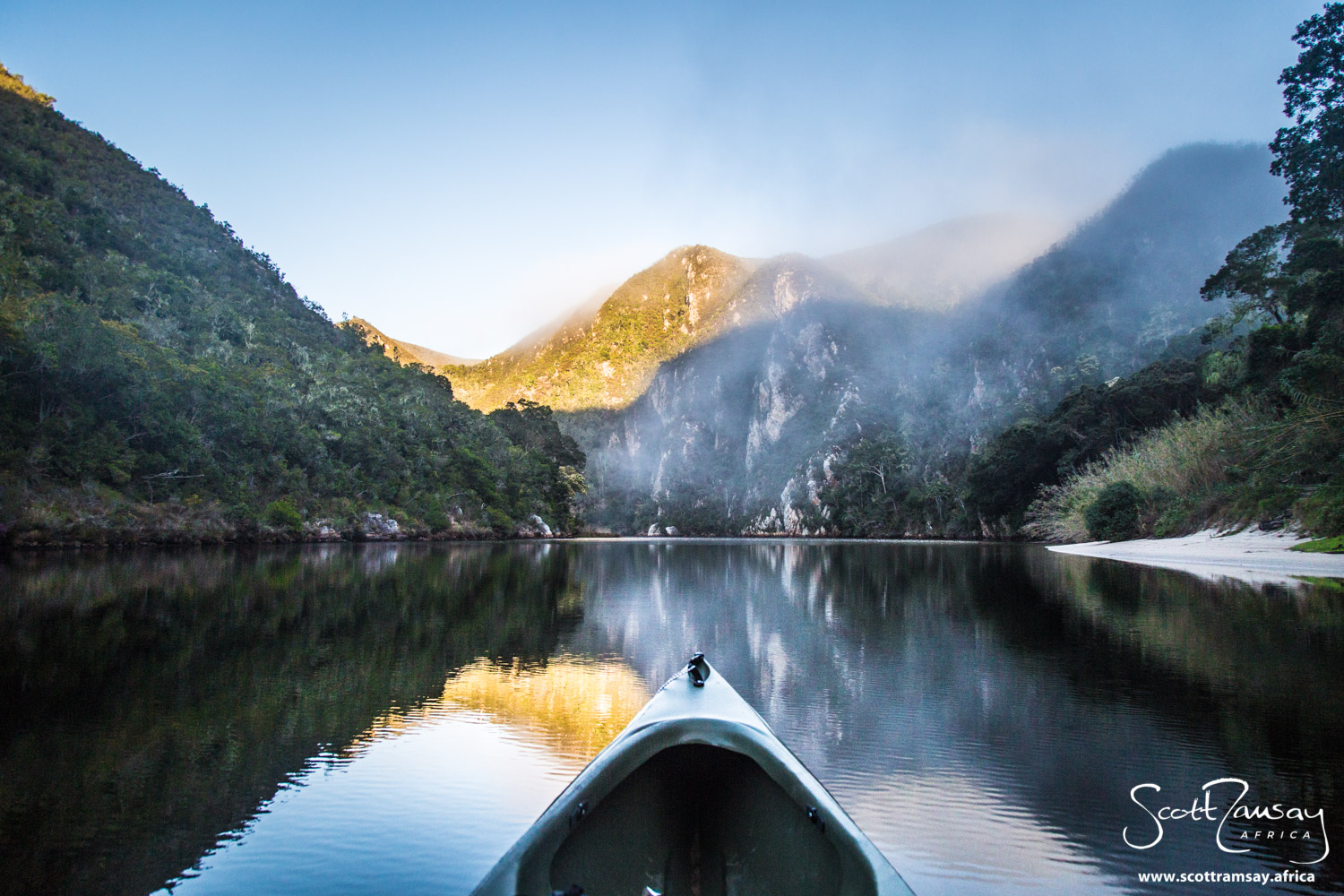 The only way to explore the Keurbooms River all the way to it's higher reaches - up to Whisky Creek Cabin - is by paddling in one of the supplied canoes.

Just a few kilometres east of Robberg and Plettenberg Bay is Keurbooms Nature Reserve. Like Robberg, this little reserve packs a seriously impressive punch, though perhaps at first it’s not as obvious.

Most of the country’s rivers and estuaries are damaged or polluted by upstream industry, farming and uncontrolled development and sewerage.

So to find a relatively pristine river so near to a large urban area is special. Keurbooms is one of these rivers, even if there are some serious upstream threats currently to its ecological integrity. More on this later.

The reserve doesn’t have the most pristine entrance, lying close to the national N2 road, which crosses the river mouth via a large motorway bridge.

Don’t let that worry you, however, because once you’ve moved upstream into the gorge, you’ll think you’ve wandered into a pristine past, maybe 200 years ago, when there were no noisy cars or trucks.

Like Robberg, there are no roads in Keurbooms. Robberg has it’s hiking paths, but Keurbooms has it’s river, and the only way to explore it is by boat or canoe. CapeNature rent out very comfortable, stable and user-friendly canoes seating two people.

Boating is allowed too, but only upstream to a certain point. Because of lockdown, however, there were no boats on the river, and we had the whole river to ourselves as we paddled on our canoes. Our destination was Whisky Creek Cabin, seven kilometres upriver, near the top end of the reserve.

The more you leave the river mouth behind you, the more you fall under Keurboom’s spell. The river gorge narrows and the forests become thicker and seemingly more mysterious.

The most obvious arboreal attractions are the immense yellow wood trees standing like guards on the river banks.

The dense, mostly silent forest has an air of eeriness and timelessness about it. If those trees could talk…they would be able to tell a story!

Yellow wood trees in the Knysna forest nearby have been dated to over 1000 years, and I wouldn’t be surprised if some of the yellow woods in the Keurbooms area are almost as old.

Old man’s beard – a type of yellow lichen – grows thickly on the forest trees. In early morning and late afternoon, the sun shines through it, leaving beams of golden light. This lichen ceases to grow in air that is even slightly polluted, so judging by the abundance of it in Keurbooms, I can only deduce that the air is very fresh indeed!

The Keurbooms river and riverine forest is important in a national context. As mentioned, South Africa’s rivers are under big threat. But it’s indigenous forests probably even more so.

Keurbooms was proclaimed in 1980 specifically to conserve the so-called Afromontane floodplain forest, which is not conserved formally anywhere else in the country.

Although these large species are gone, when you paddle up the Keurbooms you can get some sense of the wild atmosphere of the past. As you head closer to Whisky Creek cabin, you’re enveloped by pure natural bliss.

The deep silence of the gorge is broken only by the sound of your paddle dipping into the river.  Or by the resident fish eagles which call out from their perches high up the yellow woods. Or by the Knysna loeries kok-kok-koking in the forest. Look out for the flash of crimson on their underwings as these furtive, beautiful birds dart across the river to hide away in another tree.

Because it was winter, the aloes were flowering, flaming orange against the green forest. Ericas were in full bloom too, a splendiferous purple feast for the eyes.

A few years ago I visited Keurbooms in summer, when the fynbos and aloes are were looking a bit bedgraggled. Winter, however, is a totally different story. The colours of the fynbos, and their reflections on the water were spectacular!

The river is tidal up to the first rapids which lie just below the cabin, so the ocean pushes salt water far upstream. On our way up, we spotted a seal fishing six kilometres up the river! Every day we spotted him far upstream.

The river water is dark and clear, and fantastic for safe swimming (I did wonder if there are any bull sharks swimming around though! They’ve been known to head up similar rivers for several kilometres).

The cabin is simple, but perfect for the reserve. There are bunk beds inside, with a camping fridge and freezer to keep your food and drinks cold. An outside gas hob stove is fine for cooking. And a loo and shower with hot solar water keeps things civilized.

A braai area on the deck is the focal point for dinners and early morning coffee. Mornings take on an ecstatic tone. Do yourself a favour and wake up before sunrise to listen to the dawn chorus of birds, and watch the sun rise up through the forest on the opposite bank.

Better still, take the mattress off your bunkbed, and sleep outside on the deck. The position of the cabin in the gorge means that there is no artificial light intruding into the night sky. The stars are exceptional.

Keurbooms is almost perfect! The only concern to me was the sizeable forest of invasive black wattle trees that stand about 50 metres upstream from the cabin (outside the reserve on private land).

If ever you want to show someone who doesn’t understand the threat posed by invasive alien tree species, then bring them here.

Walking through the wattle is almost impossible, because it’s so thick. It has choked out all other indigenous vegetation, blocked out the sunshine, and sucked up most of the ground water, so it’s effectively like walking through a desert.

The contrast between the wattle and the surrounding fynbos and indigenous forest is huge. The sooner this wattle can be removed, the better for Keurbooms and its ecological integrity.

Overall, however, Keurbooms is another must-visit reserve for the serious nature lover. For me, it ranks as one of my favourite small reserves in the country! 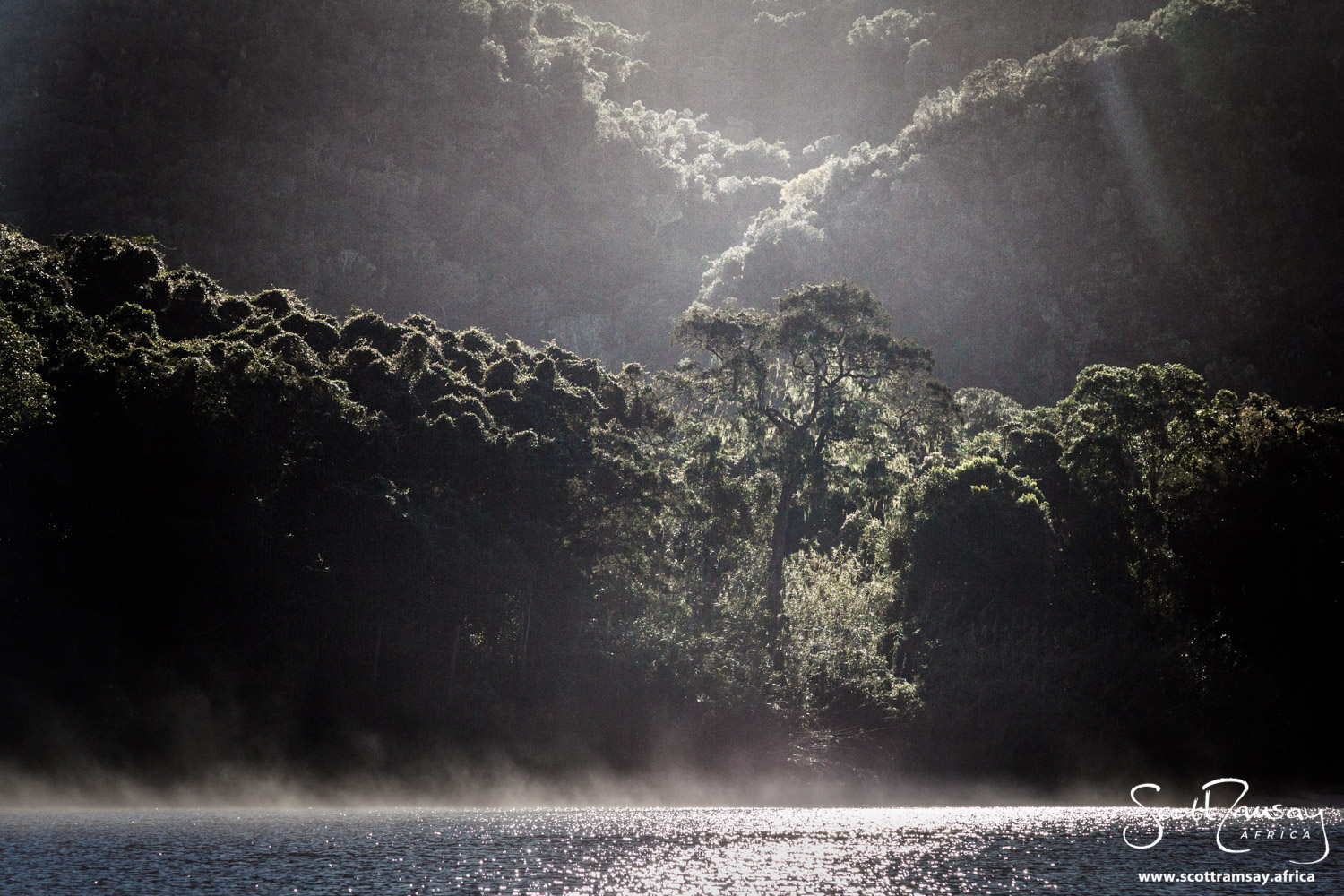 Huge Outeniqua yellow-wood trees, probably several hundred years old, stand guard on river bank. The forest is alive with the sounds of birdsong, and the quality of light in winter time is ineffably photogenic. 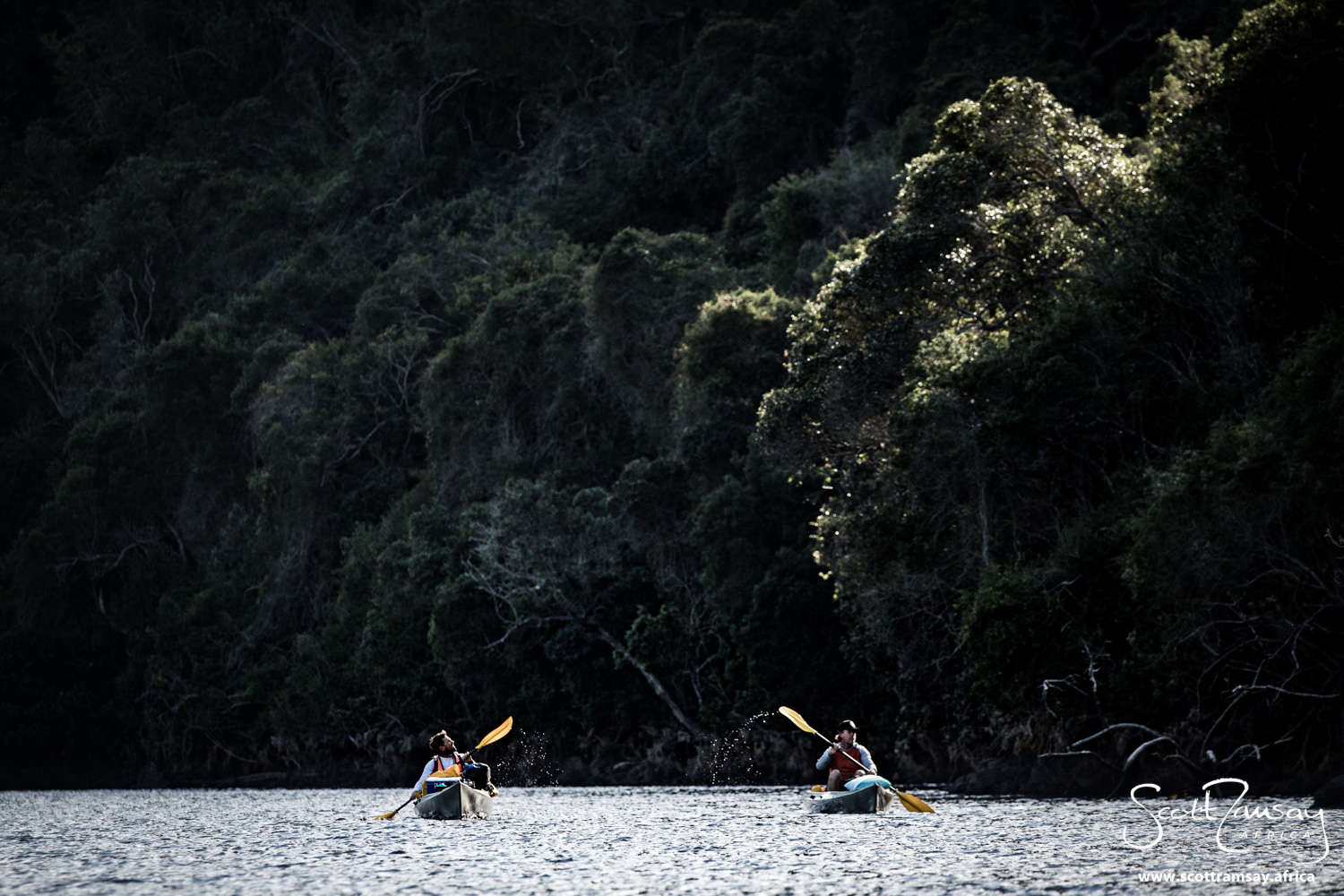 Paddling on the Keurbooms River, admiring the indigenous riparian forest. 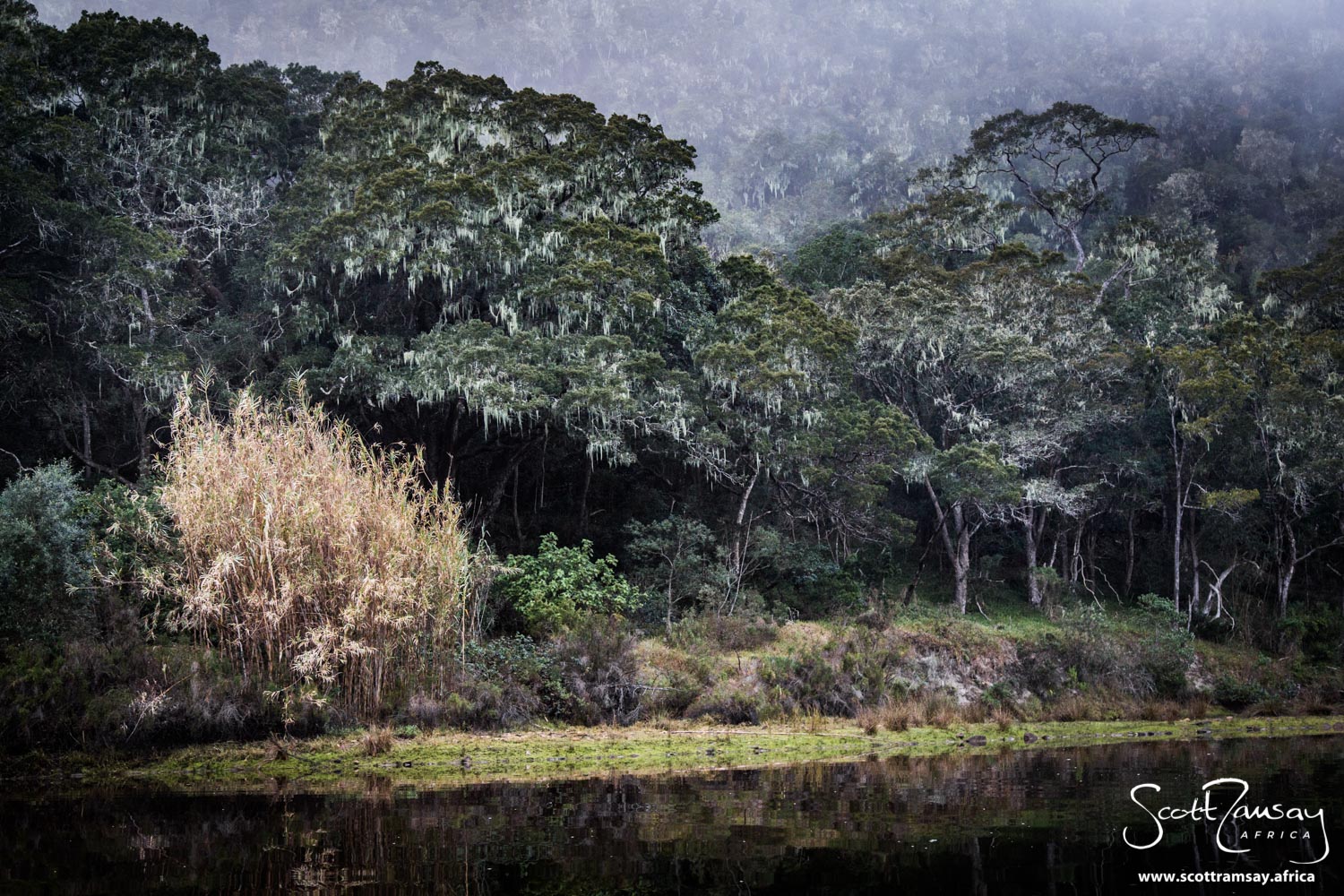 On misty mornings, the forest seems eerie...there's a timeless, ancient atmosphere to the forested gorge. The Keurbooms River is a rare exception to the hugely transformed landscape of the Southern Cape region. 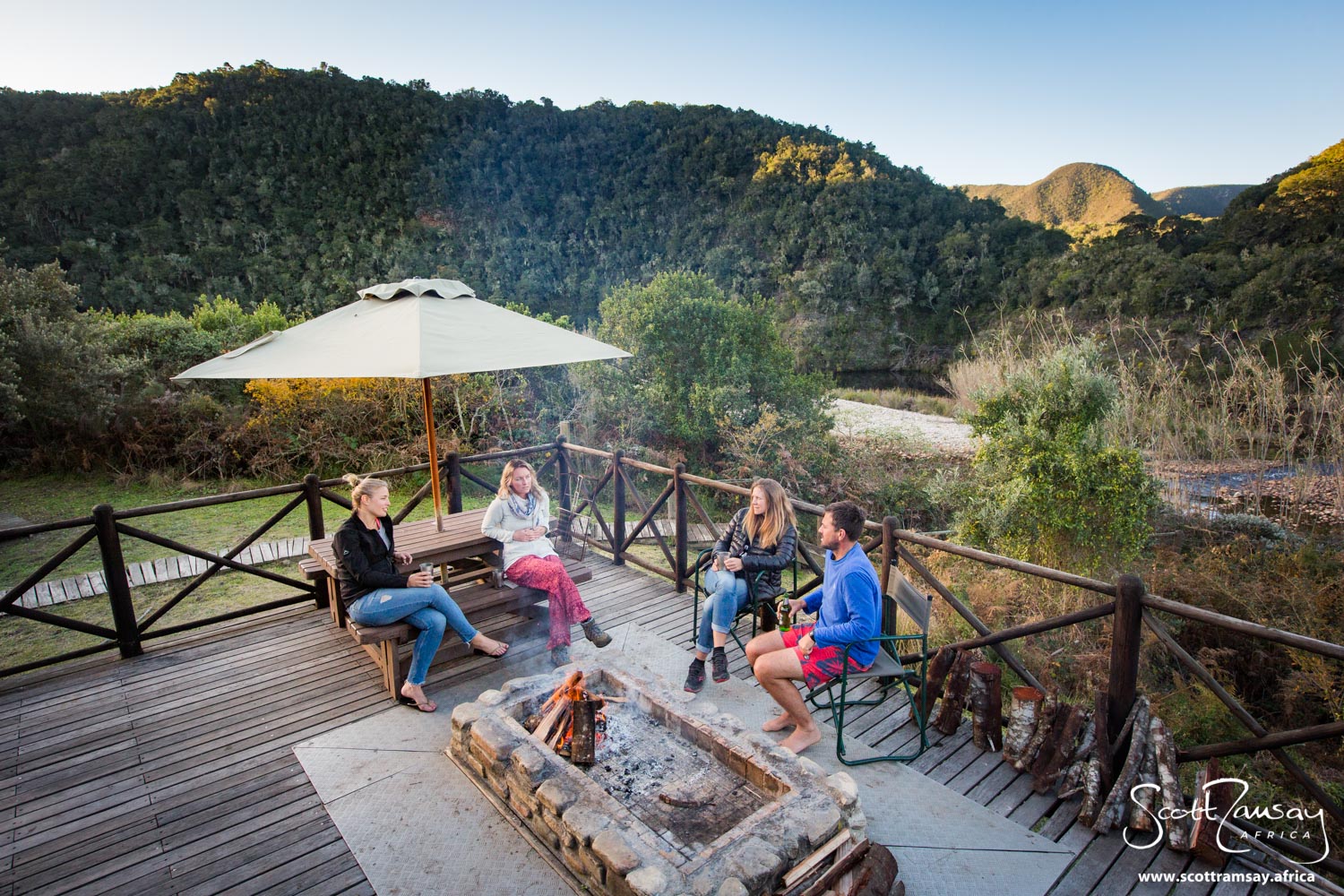 My friends Michelle, Joni, Celine and Ian on the deck at Whisky Creek Cabin, located about 7kms up river from the mouth, and only accessible via canoe. The cabin is fully-equipped for self-catering. 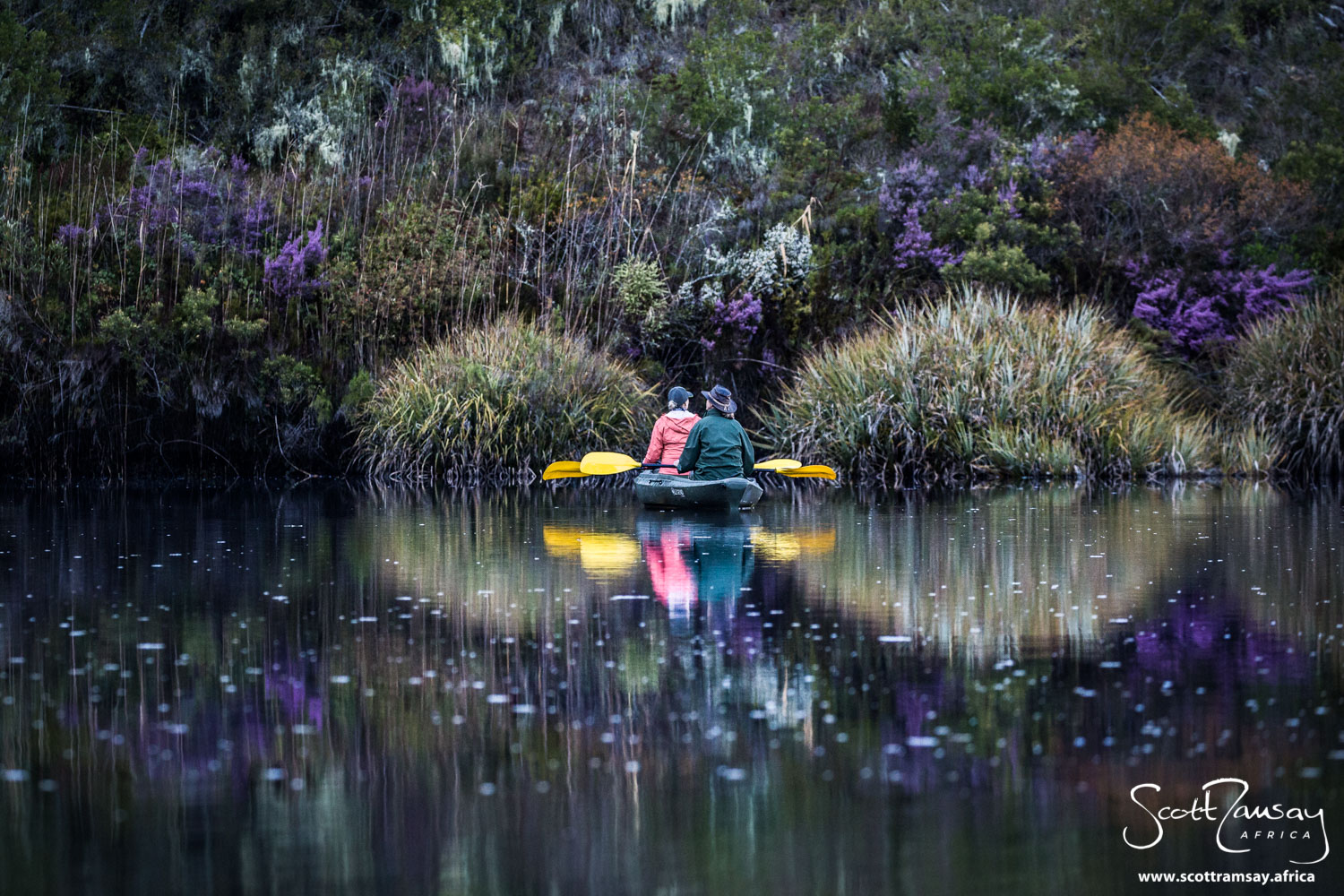 My friends Michelle and Helen floating silently on the river's still waters, early one winter morning. Look at the colour tones of the fynbos on the banks! 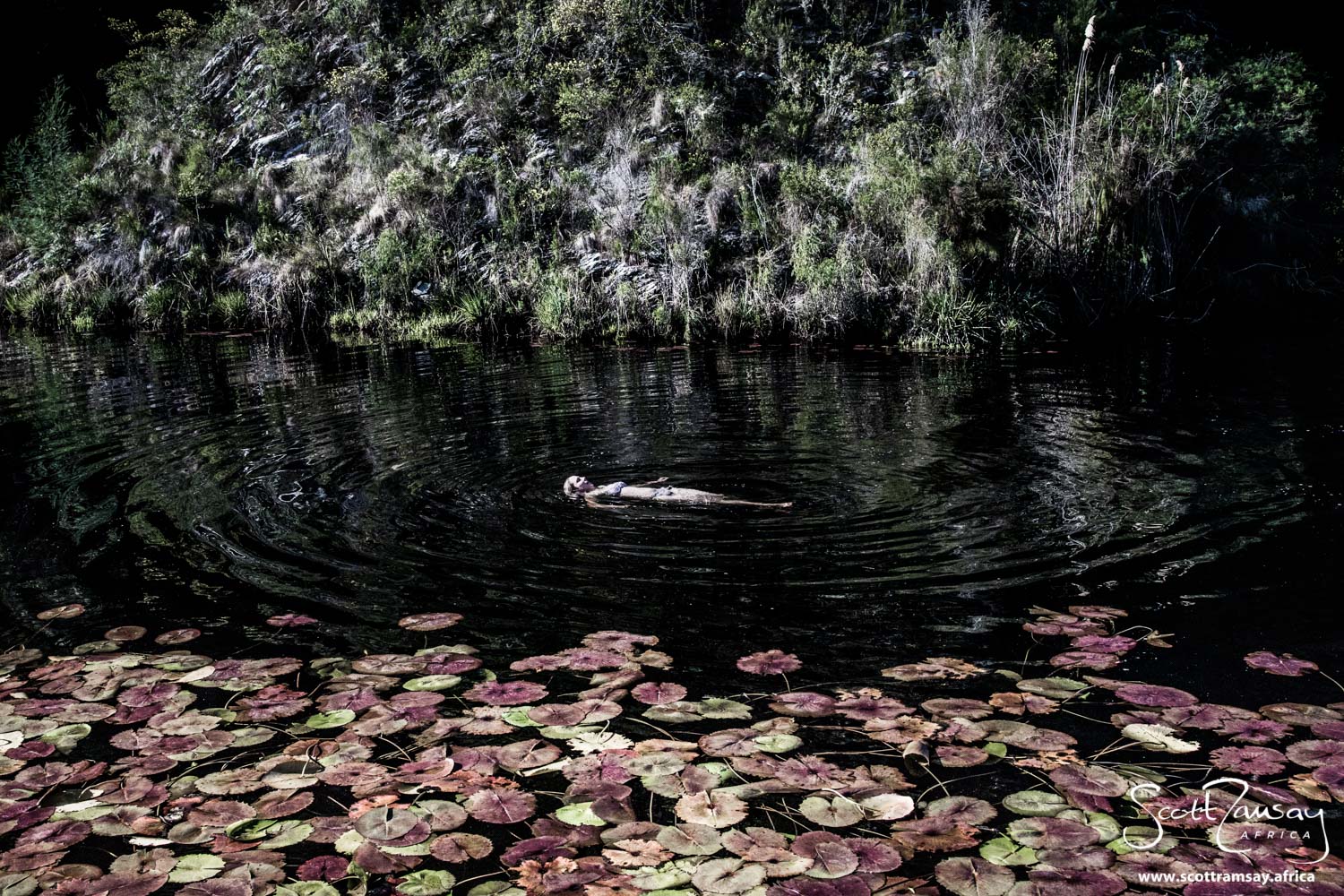 My friend Helen taking a dip one sunny afternoon... 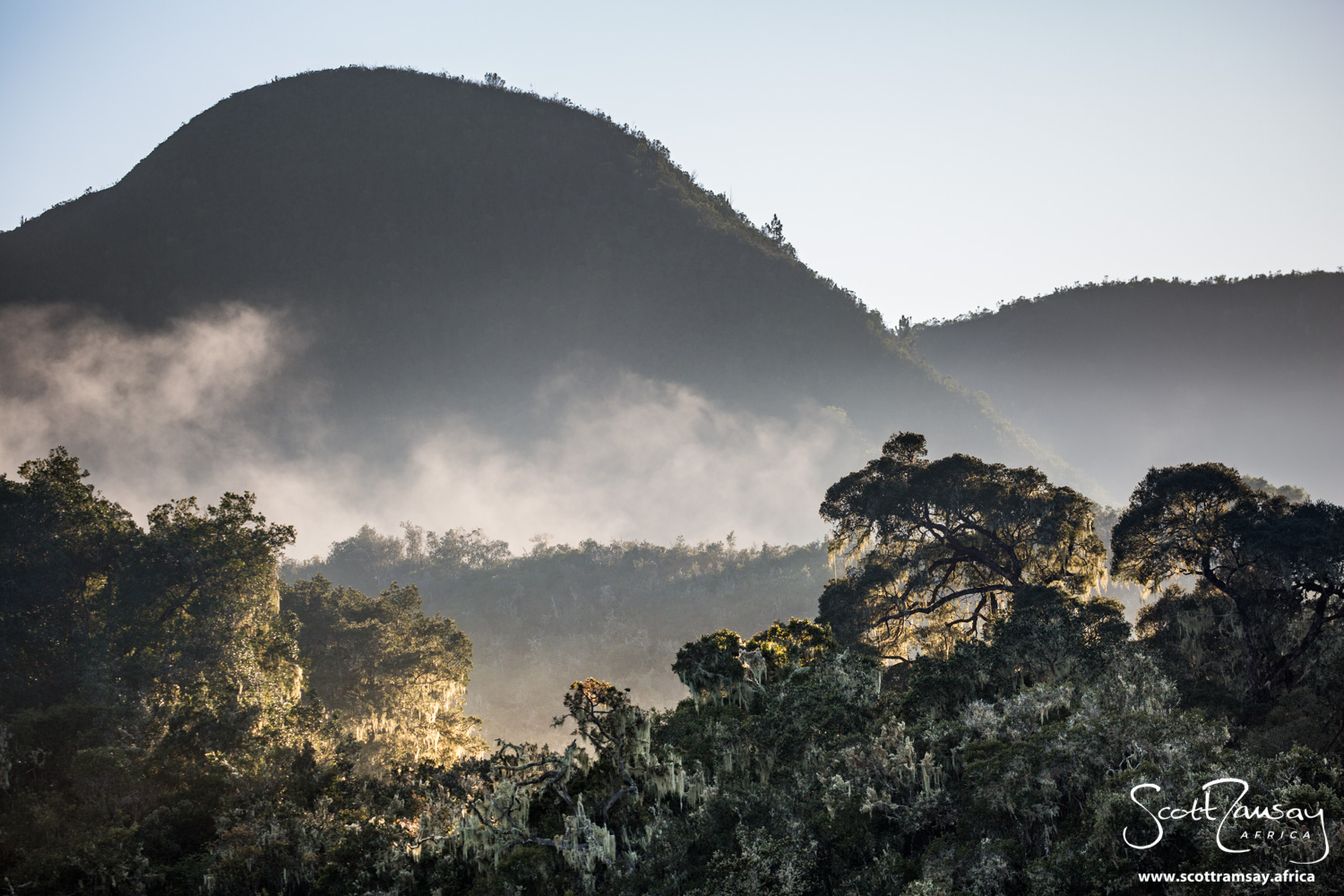 The morning view from Whisky Creek Cabin, across the river into the Outeniqua Mountains 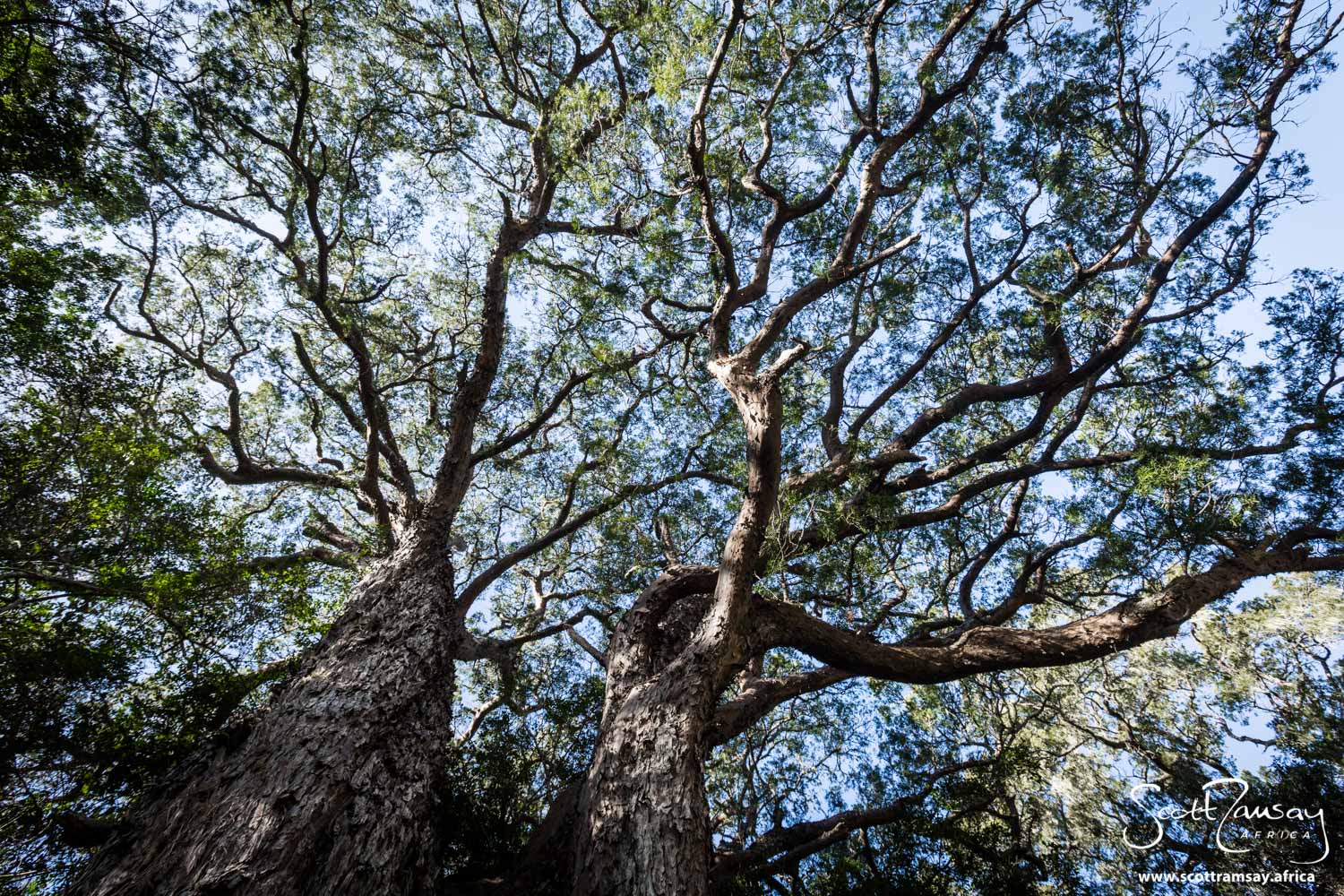 Outeniqua yellow-wood trees are known to live to over 1000 years...who knows how old these particular specimens are, but probably several centuries old... 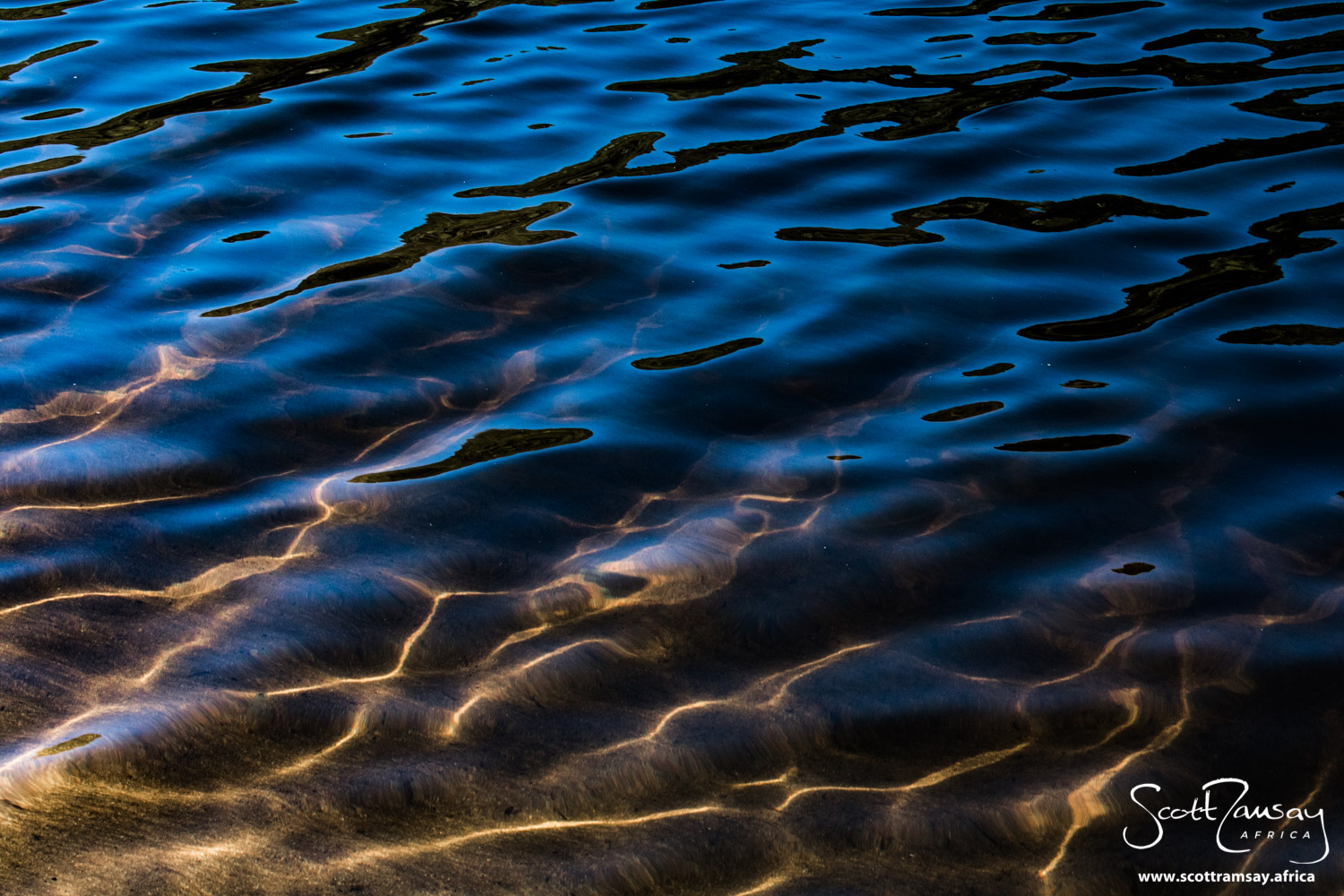 The dark waters of Keurbooms River take their colour from the tannins from the fynbos plants and forest on the river banks...the water is pristine and pure. 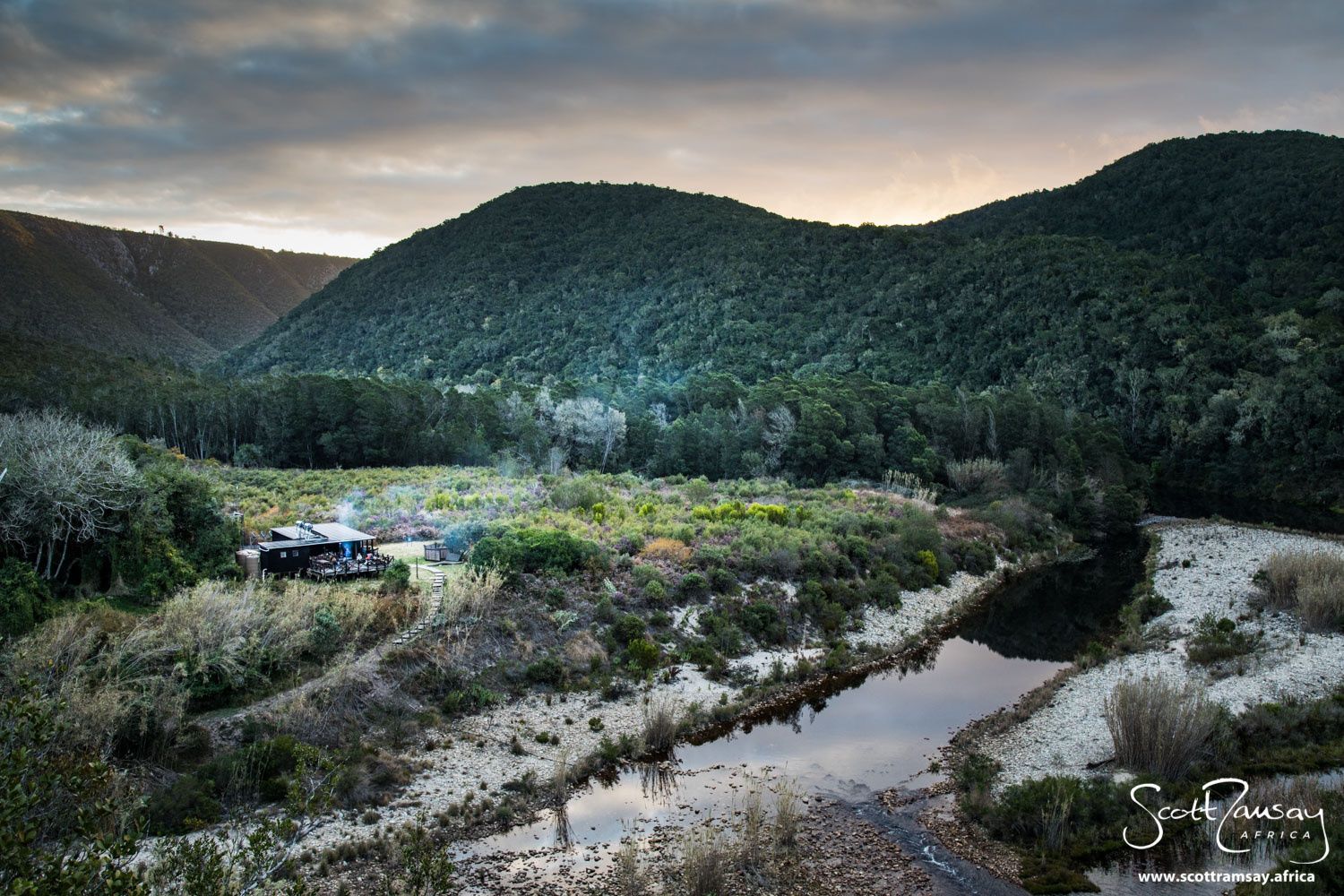 Whisky Creek Cabin, at the top of the Keurbooms River Gorge. 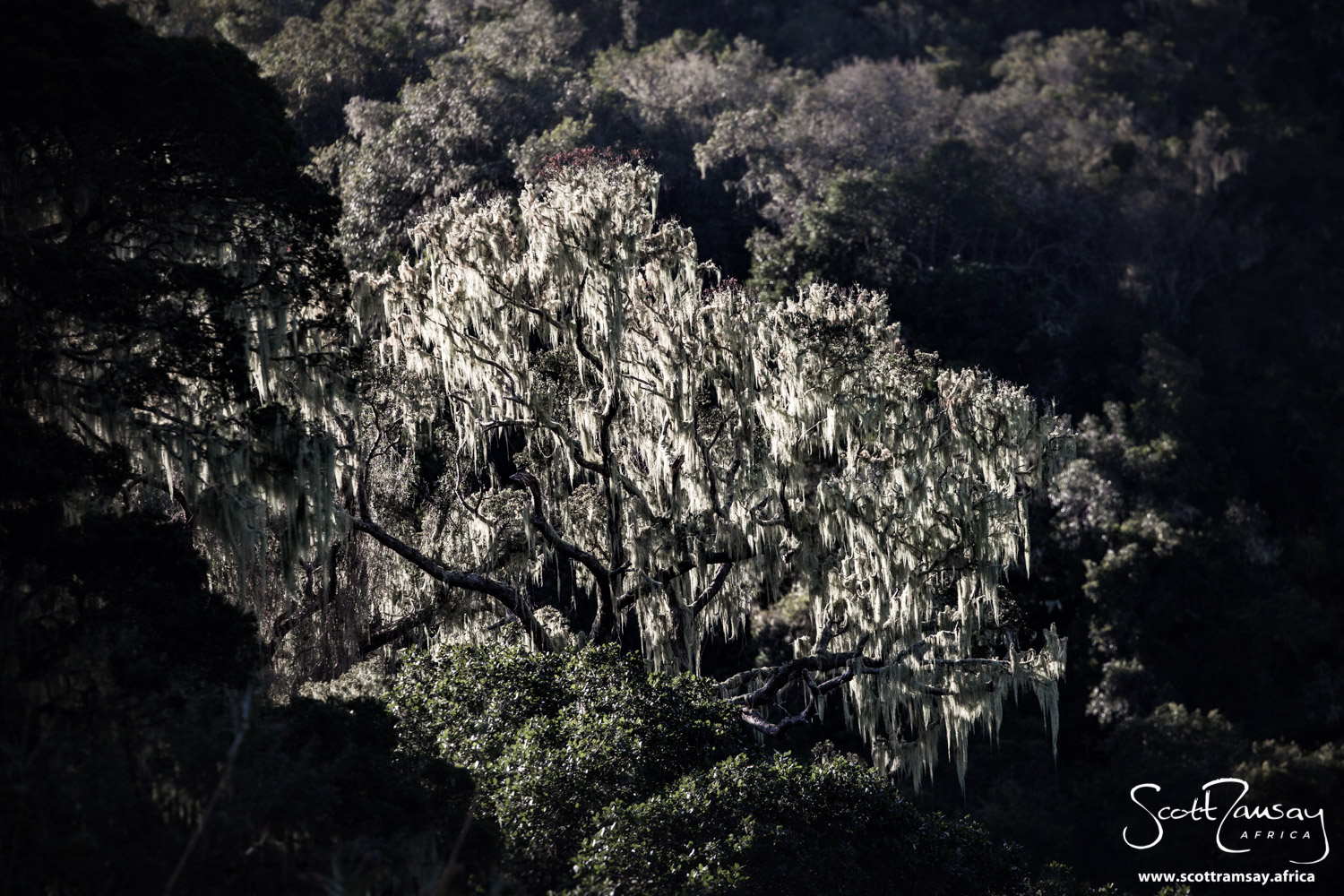 Dawn sunrays illuminate old man's beard, a type of lichen that grows on the trees. 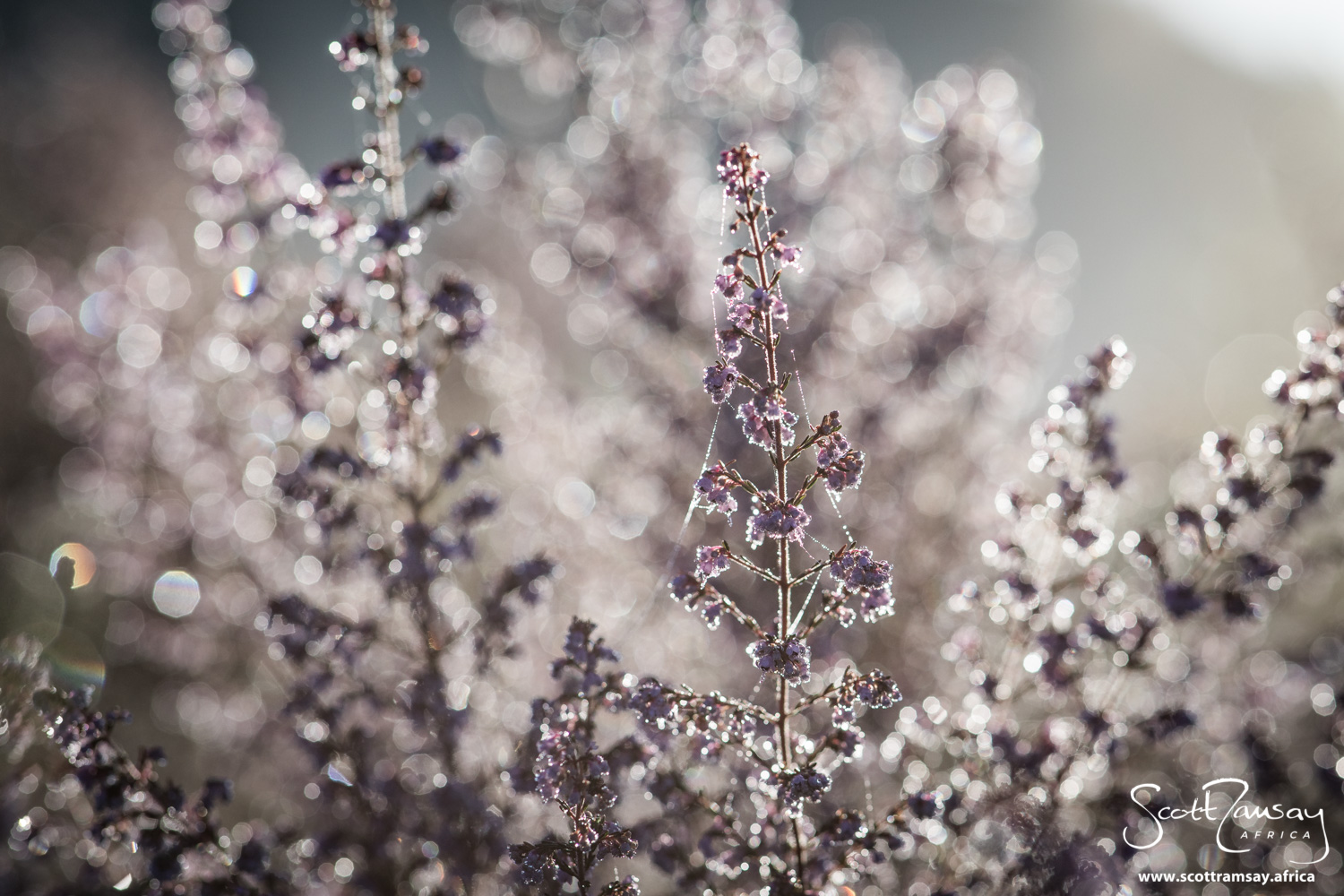 A species of erica decorated by the night's dew. 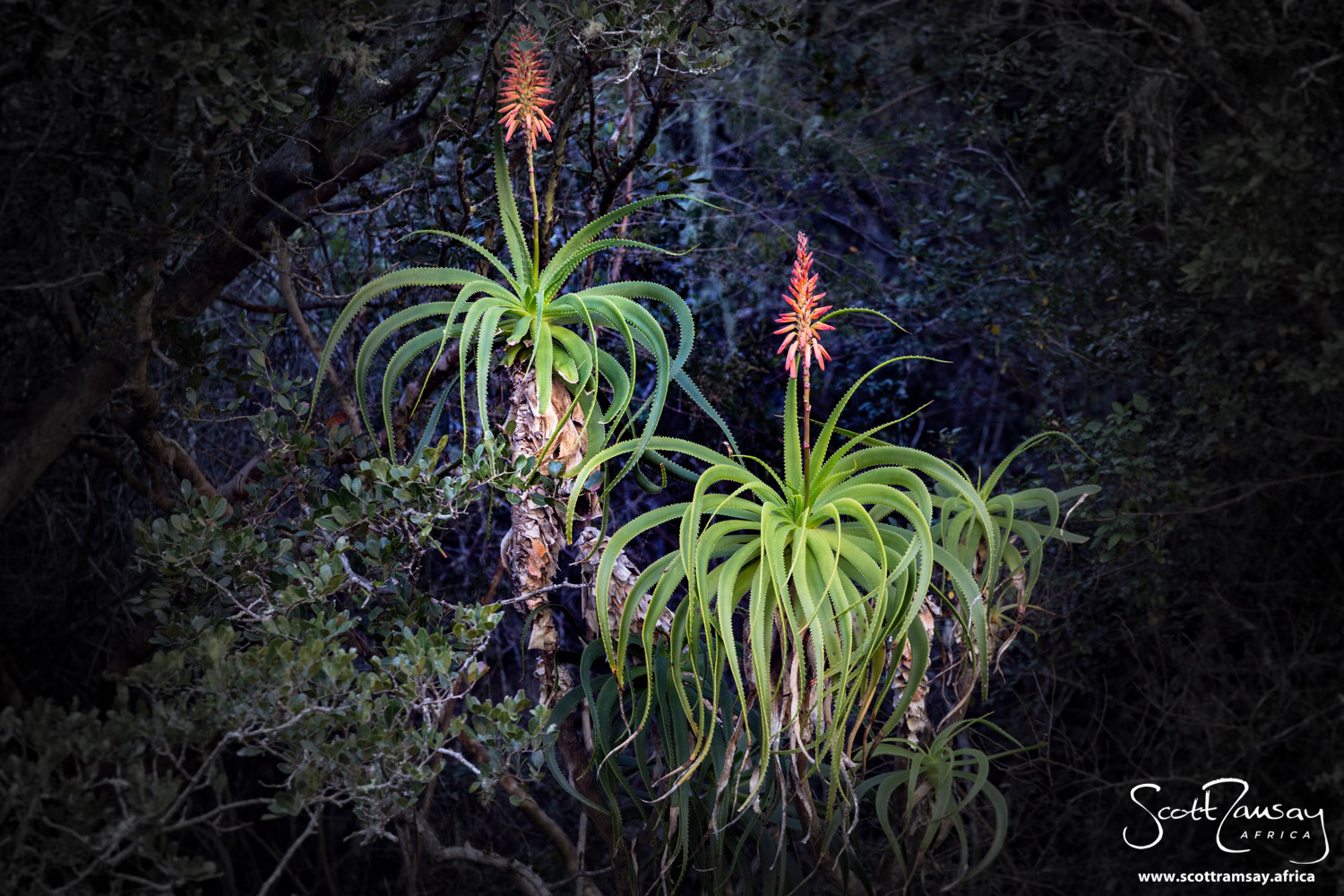 Flowering aloes on the slopes of the gorge...the wet winters call forth a riot of colour in the fynbos plant kingdom. 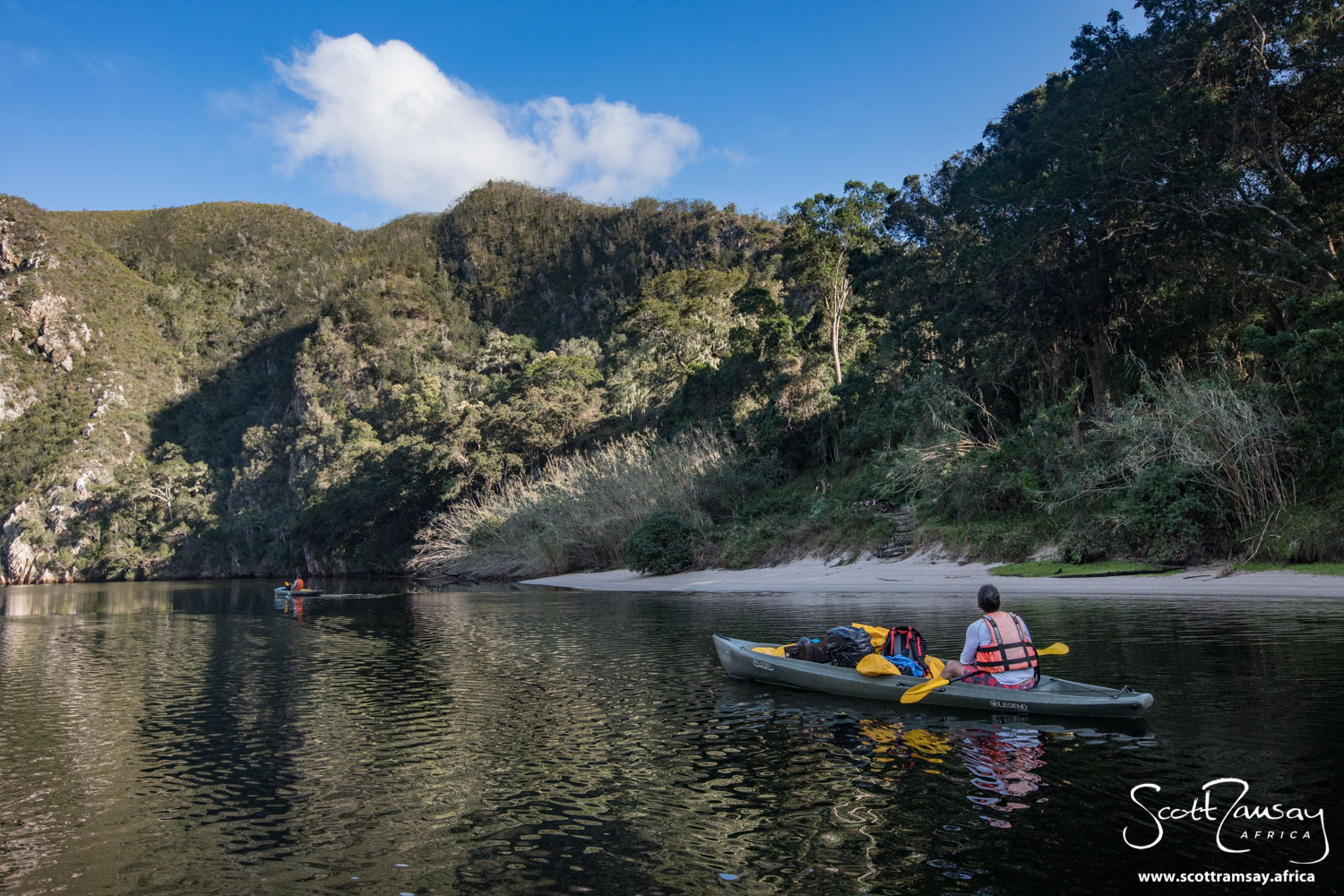 My friend Ian paddling downstream, back to the river mouth.