I’d never walked in the Limietberg mountains before, and I was genuinely taken aback at their pristine condition and their impressive photogenic impact. More commonly known as Bain’s Kloof, this nature reserve managed by CapeNature is one of the most mountainous – and impressive – in the province. 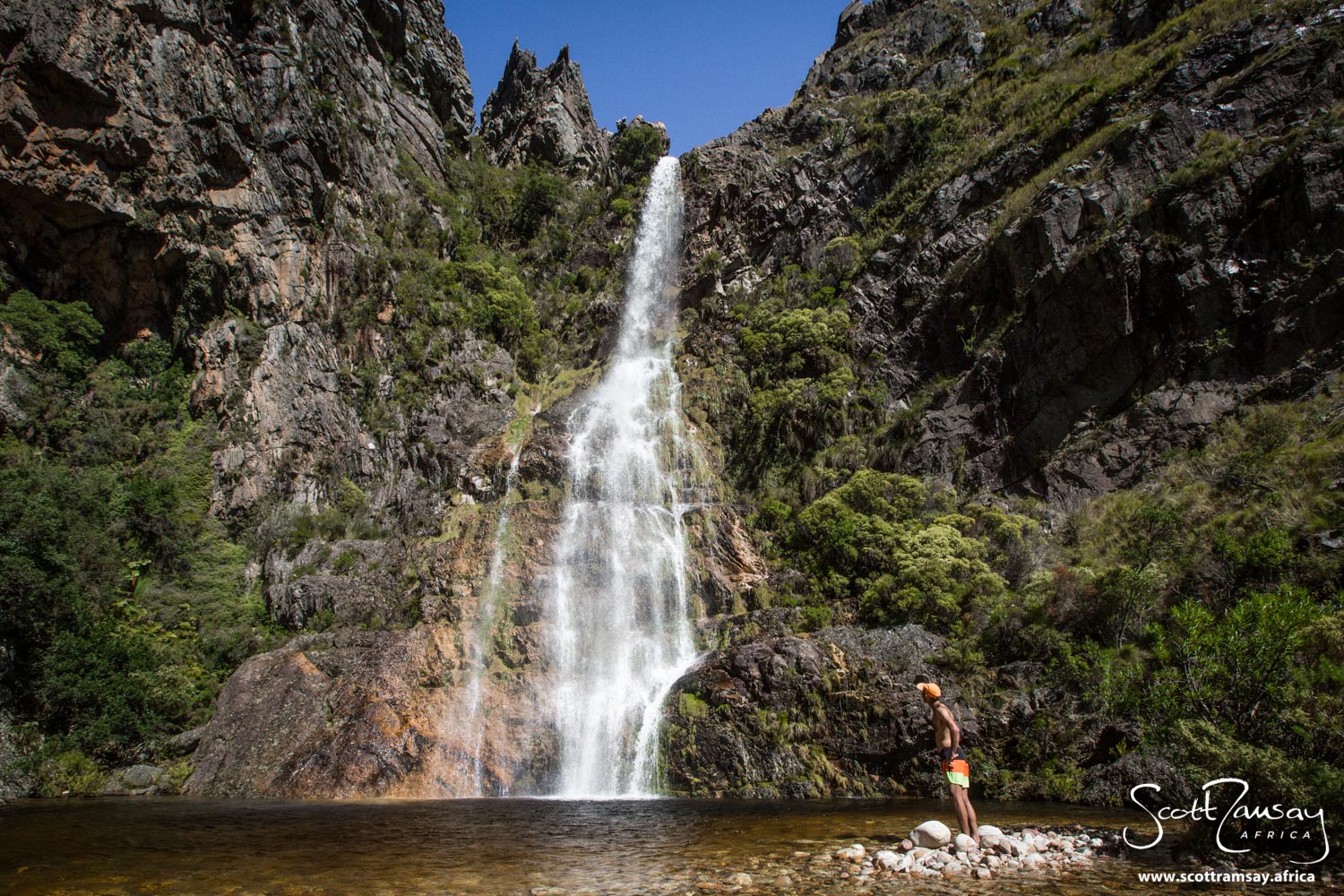 Waterfall at the top of Bobbejaansrivieer gorge in Limietberg, near the top of Bain's Kloof Pass

Wow, wow, wow. This sums up our time in the mountains lying to the east of the town of Wellington in the Western Cape. More commonly known as Bain’s Kloof, this nature reserve managed by CapeNature is one of the most mountainous – and impressive – in the province.

All these are spectacularly photogenic in their own way (particularly the northern Drakensberg). I’d never walked in the Limietberg mountains before, and I was genuinely taken aback at their pristine condition and their impressive photogenic impact.

If you’ve ever driven the National N1 road from Paarl to Worcester (the one with the big tunnel through the mountain), you will get a sense of how big and rugged these mountains in this area can be.

Massive cliff faces several hundred metres high are covered by massive waterfalls in winter, Precipitous valleys and gulleys wouldn’t be out of place in the movie Lord of the Rings.

Surging rivers of icy water flow all year round, making up for the intense heat of summer. In winter, snow falls on almost all the high peaks here, sometimes down the mountain slopes onto the roads. It’s an extreme environment, breathtaking in both a literal and figurative sense.

The Limietberg itself is part of the Du Toit’s Kloof mountain complex, and is accessed on the beautiful 26km Bain’s Kloof pass, from either the Worcester side of the tunnel, or from the town of Wellington in the west.

Bain’s Kloof pass itself is a work of architectural and road-building wonder, started in 1849, and opened in 1854 by Andrew Bain, built by a large cohort of convicts who were clearly tough folk. Whoever built it deserves some serious credit, as the road clings to the mountain sides with just a few low boulders on the edge to stop cars from teetering off the edge into the Witte River below.

Even if you don’t get out of your car, the scenery will smack you in the face. It’s impossible to ignore. In a country of impressive scenic wonders, Bain’s Kloof and its surrounding mountains are stand-out performers.

We stayed at the pretty Tweede Tol campsite, about two thirds of the way down the pass if you’re driving from Wellintgon.

Although the campsite can get busy during weekends and holidays, and has been known to be noisy and congested, we had most of it to ourselves during the week we were there. Our own private mountain paradise!

Well, we shared it with the resident baboons, which are pretty brazen in their attempts – often successful – to steal any food that is lying around. So watch out for them – if you simply lock your food away in your car, you’ll be fine (don’t leave any food in your tents, as they’ll rip your tent apart).

A pair of black eagles flew overhead as we set up our campsite alongside the little river that is a tributary of the Witte River. At Tweede Tol campsite, you really do feel immersed in the Cape mountain wilderness. It’s a tremendous location for nature lovers to spend a few days.

We spent our first full day walking the Bobbejaanskloof trail to the impressive waterfalls at the top of Bain’s Kloof pass. It’s best to drive from Tweede Tol up the pass to the start point at Eerste Tol, where you can leave your car for the day while you walk the 10km trail.

There were five of us: three adults and two kids, aged 9 and 6. Although the mountains look pretty intimidating around these parts, this particular trail must be one of the most pleasant and rewarding I’ve done for a while.

In terms of return on effort, it’s one of the best ever. The path follows a gentle upward contour for most of the trail, only increasing steeply in gradient towards the end where the waterfalls reveal themselves spectacularly. It took us about two hours to walk the 5 kms to the top of the trail, and the young kids had little problem negotiating the rocky paths.

At the top of the valley are two large waterfalls, with a series of smaller cascades below them. With a bit of scrambling, you can make your way up to the very top waterfall and its impressive rock pool. It’s one of the most beautiful, pristine places I’ve been, but it’s not for everyone as it does involve some careful climbing up some slippery rocks and cliff faces.

We spent the next few hours swimming in the icy rock pools, and warming up in the benevolent sunshine. Our packed lunch never tasted so good, as we were quite content to sit and soak up the magic of this mountain wilderness.

There is so much to admire. The little Cape river frog perching on the edge of the rock pool. The myriad patterns and shapes of flowing water that seems to ooze out of every rock face. The soothing and soporific – yet strangely energizing – sounds of water everywhere around us, echoing in multi-stereo off the cliff faces.

Spring flowers popping up out of every nook and cranny. Aloes on the rocks, their red flowers burning like fire against the cobalt blue geology.

Above, black eagles soaring, and southern boubous calling in clarion tones in the gorges. If you give yourself a chance to spend time in a place like this, there’s a sense of timelessness that can calm even the most anxious human mind…

Time did disappear, and before we knew it, it was 3pm, so we headed back down the valley to our cars, and headed back to Tweede Tol campsite for a braai under the stars.

Bain’s Kloof is well protected from any light pollution, even though it isn’t that far from several farming towns on either side of the mountains. We were all happy to get into our warm sleeping bags after dinner, lying in our tents listening to the sound of the river nearby.

The sunny days were warm, but the nights were chilly – we were visiting at the end of September, the tail end of a cold winter. Temperatures dropped from about midnight, and I found myself pulling my beanie down further over my head as the night progressed.

The next day we enjoyed exploring and hanging out in the pretty campsite, chatting, reading and lying in the sun, and keeping a watch out for avaricious baboons. The kids played on the jungle gym. In the afternoon we explored the valley above Tweede Tol.

The rock pools just above the campsite are really beautiful, so if you’re feeling lazy, there’s no need to go on a big mission. Simply walk a hundred metres or so up river from the campsite, and there are several rock pools and little waterfalls to swim in.

If you go even further up, there are several more, even bigger ones that simply have to be swum in! The Limietberg seems to have endless rock pools and streams in which to swim. And the water is so clear you can drink straight from the river.

We were a little disappointed by the state of the campsite itself, even though it’s a very pretty place. Perhaps because of Covid the staff hadn’t been able to clean or maintain it according to best standards. A toilet in the men’s ablution was leaking, leaving water all over the floor, and there were several other maintenance issues that needed to be fixed. But it didn’t detract from the overall experience. How could it? The mountains and rivers here are simply magnificent, and all small worries are obliterated by the gorgeous natural beauty.

Most of the campsites are under the generous shade of a copse of leafy trees, but in winter you may prefer a sunnier site near the top of the campsite. We preferred the sunnier spots, but in summer, when temperatures can soar, the shaded sites will be in much demand.

If you can visit Tweede Tol outside of weekends or public holidays, then it makes a superb base from which to explore the exceptional mountain scenery of Limietberg. 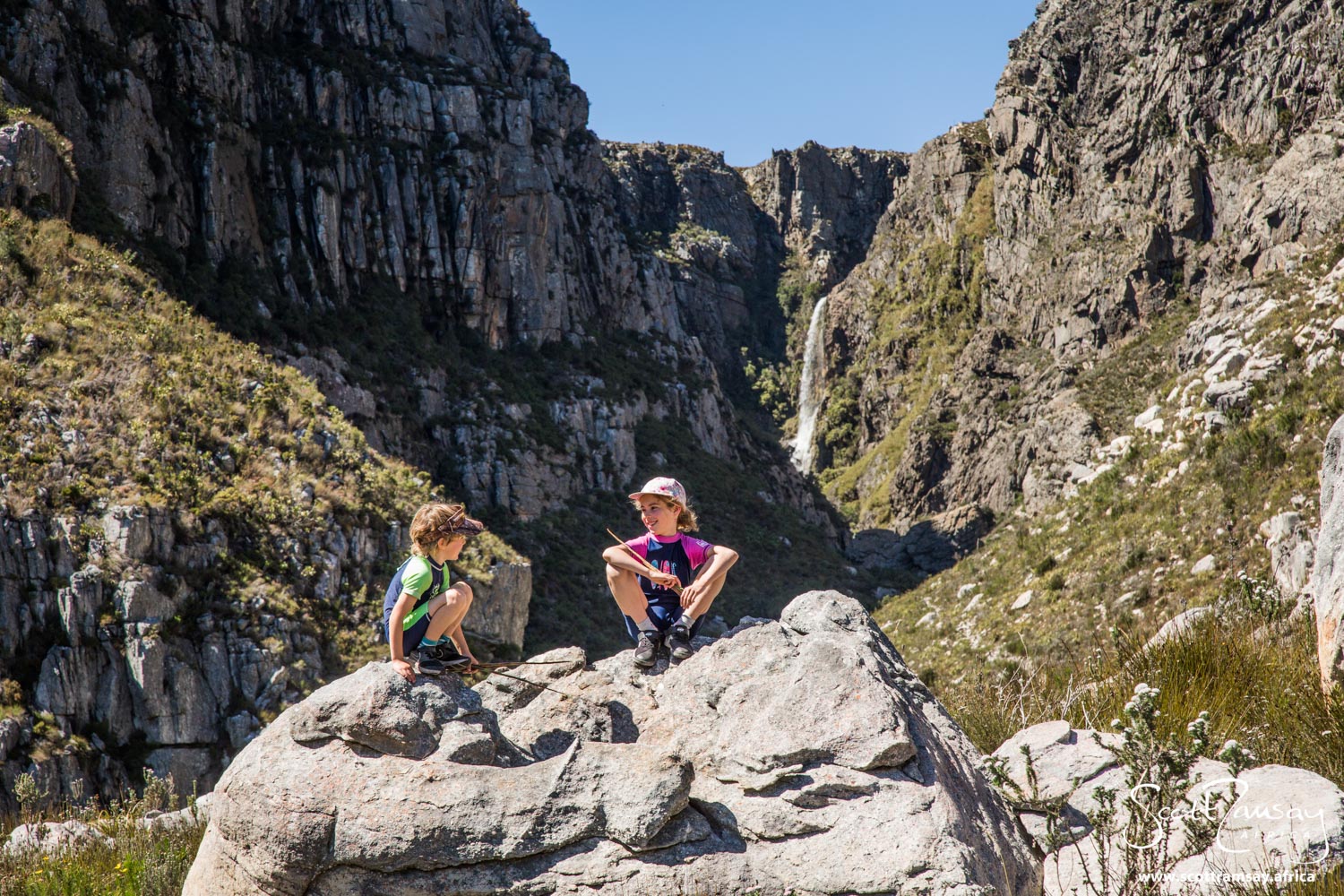 Intrepid young explorers Gabriel and Azara Davis, taking a break in the Bobbejaansrivier gorge in Limietberg 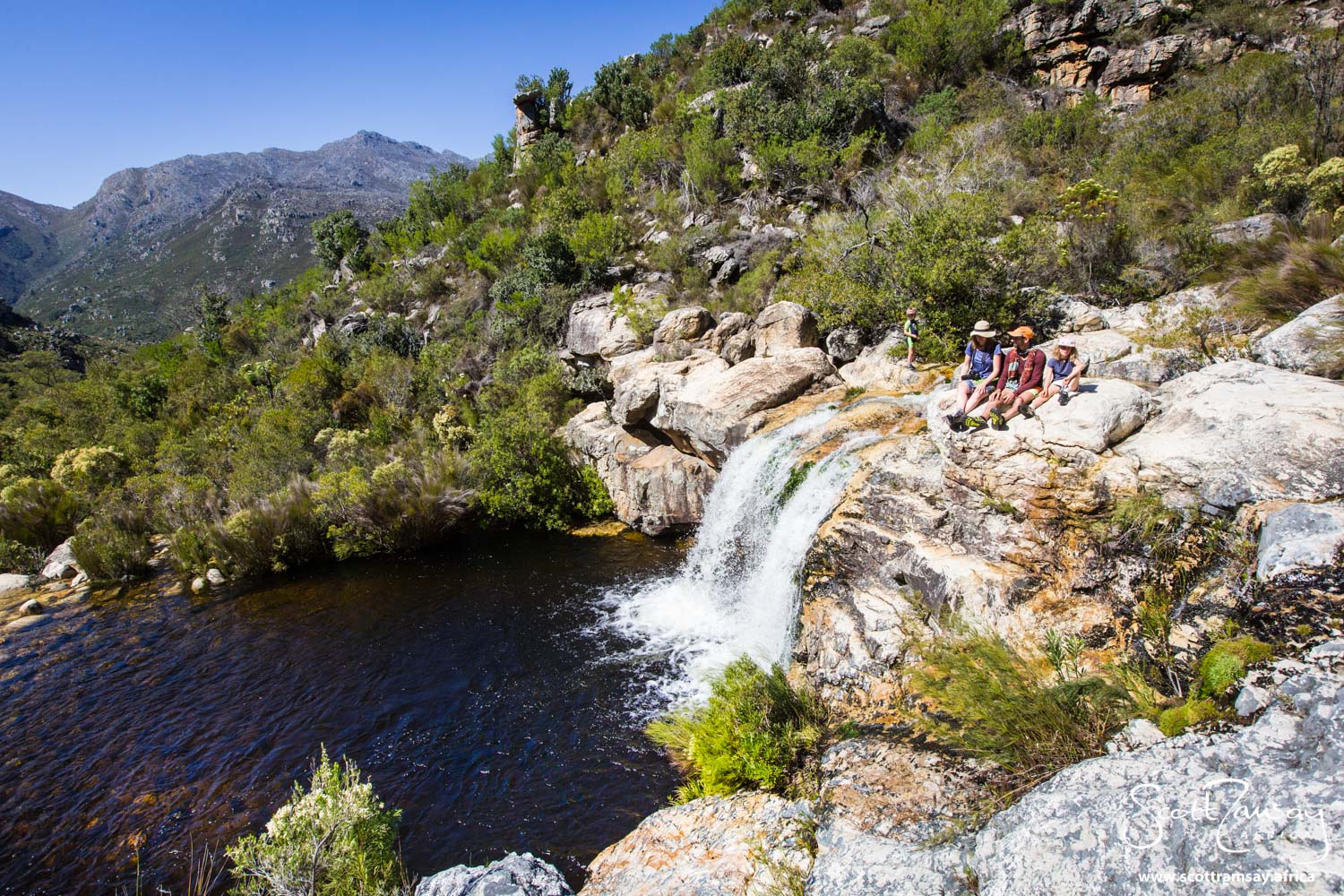 A few kilometres up from Tweede Tol campsite are several spectacular rock pools and waterfalls, easily accessed via a hiking path. 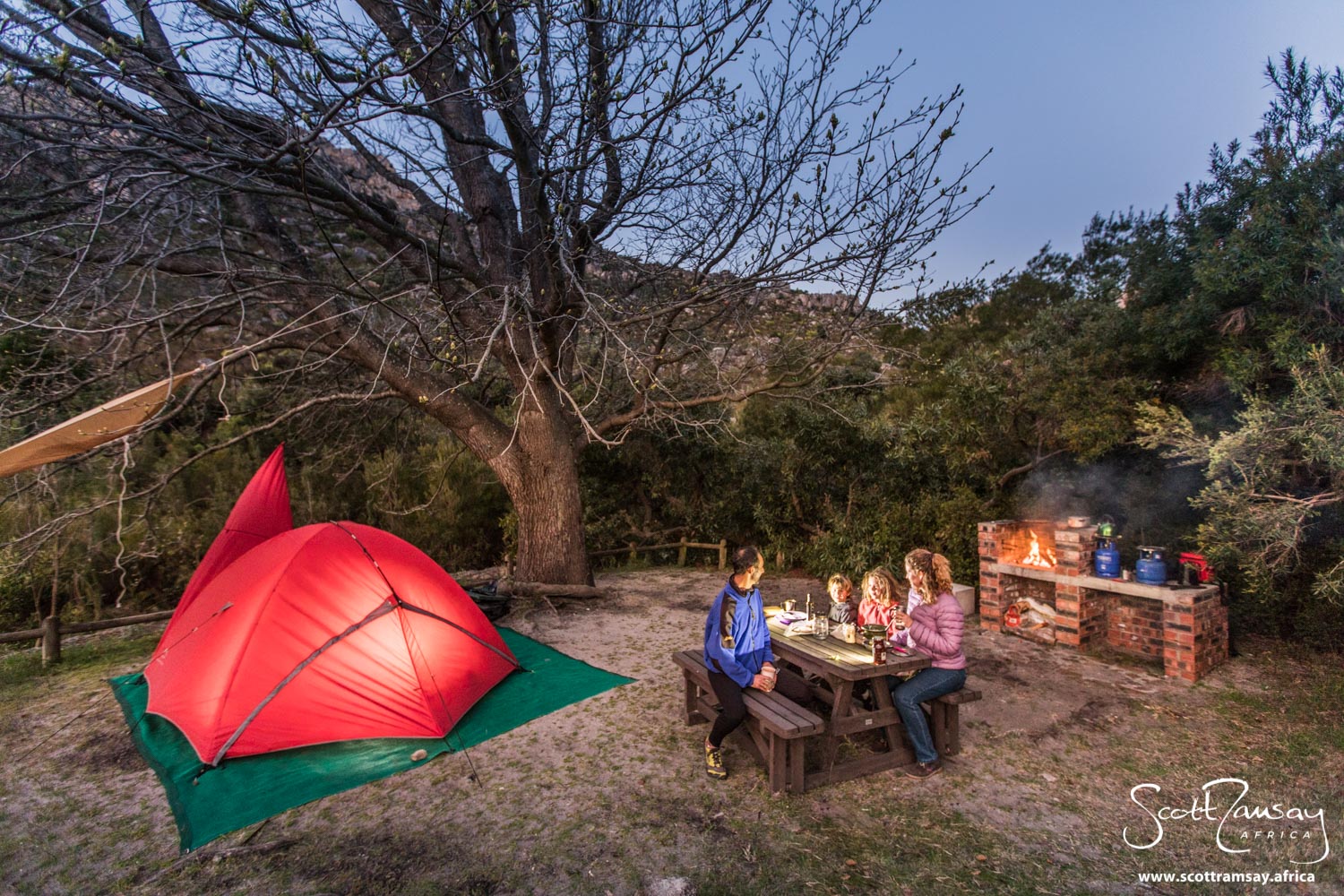 The campsite at Tweede Tol is fantastic when it's not too busy, but during peak holiday season, it apparently can become quite congested and noisy. So make a point to visit outside the busy season! 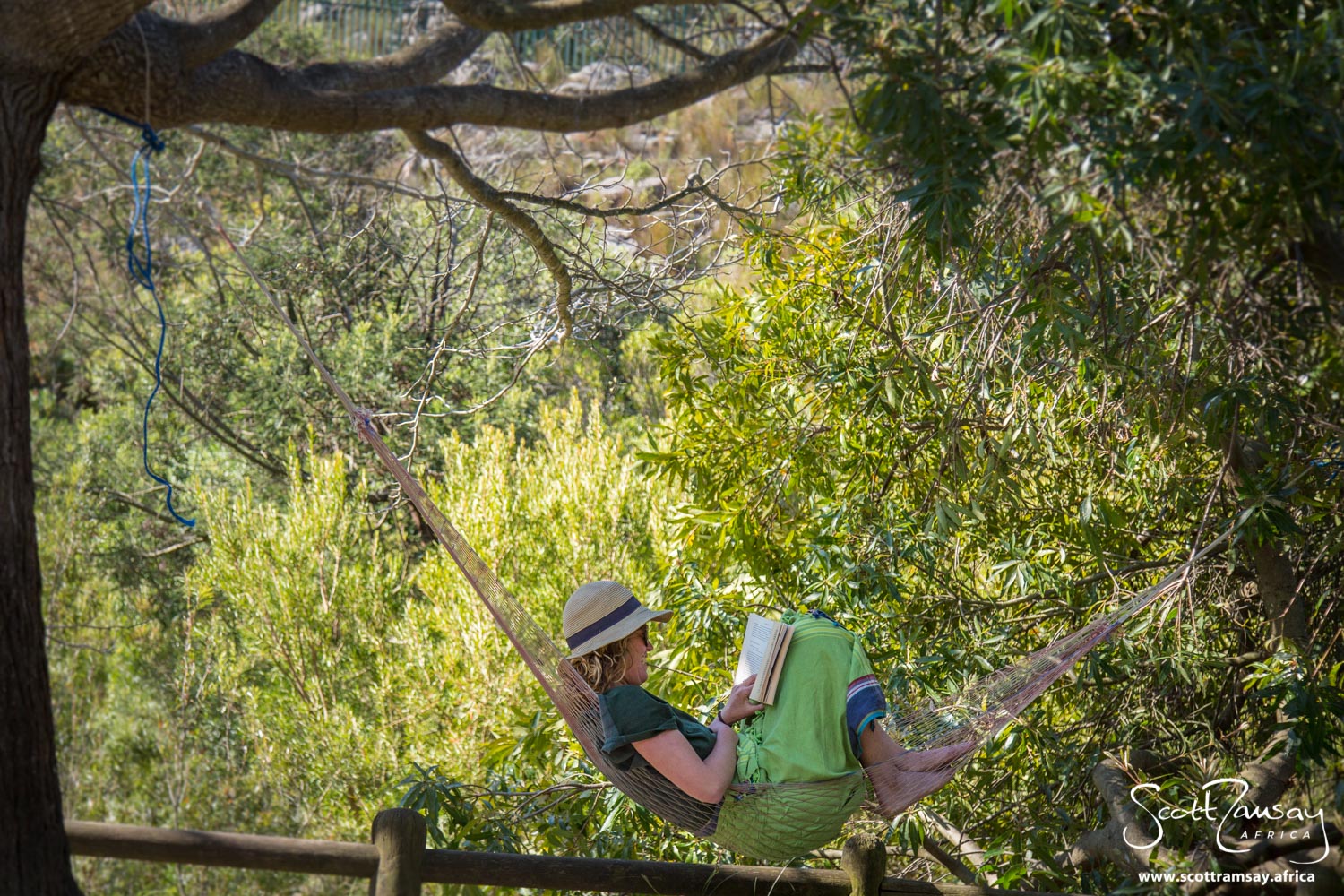 After a day of hard hiking, Jax Davis catches some air time in her hammock at Tweede Tol campsite.