Marloth may lie close to the town of Swellendam on the national N2 road, but this mountainous reserve is not easily explored. The only way to get to know it properly is to hike it! There are several day trails, and a multi-day trail, that takes hikers into it's rugged terrain, beautiful fynbos and patches of old-growth indigenous forest. 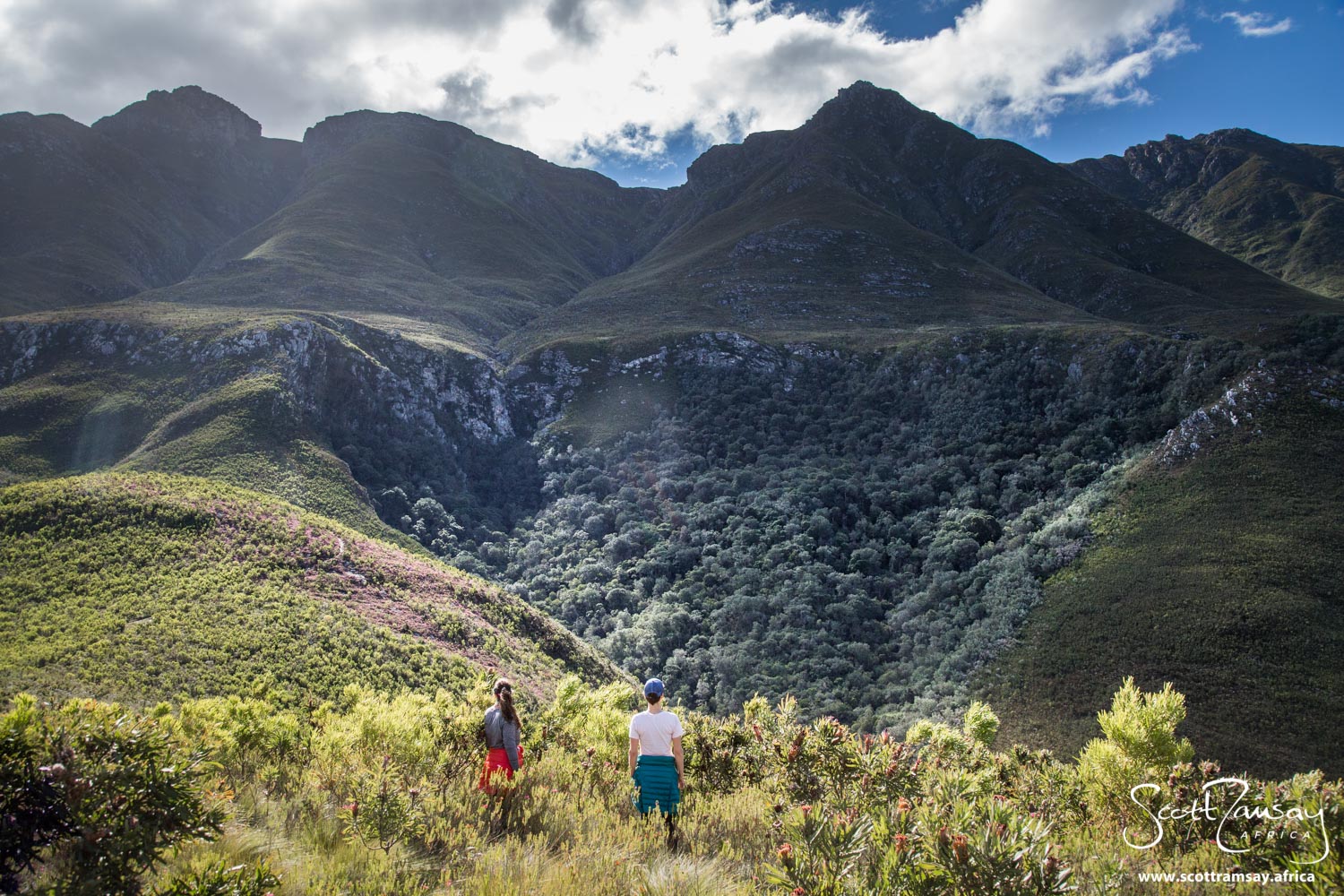 My friends Julia and Hailey checking out the mountain peaks of the Swellendam Mountains, in Marloth Nature Reserve

Lying just off the national N2 road, about two and a half hours from Cape Town, Swellendam is South Africa’s third oldest town and owes much of its attractiveness to the mountain lying a few kilometres to the north.

I’ve always slowed down on the road here, mostly because there are always traffic cops on that stretch. But that gives me a chance to gaze up at these berge.

And every time I’ve driven past, I’ve always told myself, I must go there soon. There is little that inspires me more than the prospect of exploring an undiscovered wilderness. Marloth has remained elusive to me so far.

Marloth is about 140 square kilometres – about 15 kms long and ten kilometres wide, so it’s not as big as Cederberg, but it’s sizeable enough to get lost in!

After 15 years of exploring this beautiful country’s protected areas, I’ve realized how incredibly lucky we are to have so many different, diverse nature reserves, especially because they are easily accessible, and lie close to busy urban areas.

Our journey here was at the end of July, the middle of the Cape winter, but arguably the prettiest time of year in the Overberg region.

The sunny, still days in between the rampaging cold fronts of the Cape make for superb hiking and rock-pool swimming. The fynbos is in full flower, and the sugarbirds and sunbirds are zipping and zapping around, crazed up on their nectar-rich diet.

The Swellendam mountains rise steeply from about 200 metres to the highest peak of Misty Point at 1 700 metres, which is set back in the middle of the range.

From the reserve gate, however, your eye is drawn to the so-called Clock Peaks which loom large over town – Twaalfuurkop at 1428 metres, Elfuurkop at 1399 metres and Tienuurkop at 1195 metres.

Around these peaks are crags and cliffs aplenty, with flourishing fynbos on the slopes, and ancient indigenous forests in the kloofs.

Unfortunately, the on the lower slopes of the mountains, the reserve abuts some extensive private pine plantations, so the grand view of the mountains is somewhat diluted.

Bushbuck Cottage was unfortunately closed for maintenance when we arrived, so we were allocated Suikerbekkie Cottage, which didn’t have the best view, as it’s adjacent to the pine plantation. Also, we were four adults, and the little cottage is probably suited best to two adults and two kids.

But we weren’t there to lurk indoors anyway. Marloth is all about hiking and swimming, birding and botanizing (that’s nature nerd-speak for checking out the blommetjies in detail).

We would have loved to do the Swellendam Trail, as this 4 to 5-day route is probably the best way to immerse oneself in the reserve. The route follows a circular path starting and ending at the entrance. The Trail is currently closed to hikers as the overnight huts are being upgraded – but I hope to be back once it’s open again.

There are plenty day trails however. On our first morning, we set out into the mountains, walking through the pine plantations, into hills of fynbos, and up to the old forests at Koloniesbos and Duiwelsbos.

Most of the old forests of yellowwood, stinkwood, beech and wild olive were chopped down by early colonial developers, to build homes and buildings in Swellendam. But Marloth’s two pockets of forest are intact and mostly pristine. The hiking trails are well-marked and despite a few steep parts, not too onerous.

The forests are close to each other, lying in adjacent kloofs, and the whole trail to both forests takes about four to five hours, if you take your time to soak up the splendid scenery.

Interestingly, the river, streams and waterfalls weren’t gushing as we had expected in winter. By some trick of the weather gods, these mountains don’t receive as much rain as the rest of the Western Cape in winter. June and July are two of the driest months of the year, with most rain falling in autumn and early summer, surprisingly.

The waterfall at the top of the Duiwelsbos trail was still flowing nicely, however, and is definitely worth the hike. I imagine that in summer the rock pool is incredible to swim in…we will be back to test it out for sure!

The parths are well marked, and there is a pretty picnic site near the start of the Duiwelsbos trail that makes a great lunch spot. We lazed about in the sunshine for an hour or so after our hike to the waterfall.

Watch out for baboons, though. They may be tempted by your picnic. We saw them on the Duiwelsbos Trail as they foraged in the forest undergrowth.

We also found a dead baby baboon on the trail, most probably killed by an older male with a bite to its neck and head – we saw a deep gash in the back of the baby’s skull.

It was poignant to photograph the baby baboon up close, looking into its open but vacant eyes. Its fragile yet perfectly designed hands and feet revealed a sense of its personality and individuality that is otherwise lost when viewed from afar. This was a real, live, conscious creature a few hours previously…

Other larger animals in the reserve include rhebok, grysbok, klipspringer, duiker, as well as leopard and caracal, but sightings of the predators are rare.

For birds, look out for specials like Narina Trogon and Tambourine Dove in the forests, while the endangered Cape vulture can also be spotted soaring high (there’s a thriving colony of these huge birds in De Hoop Nature Reserve, just 50kms to the south).

I wonder if anyone has ever seen the furtive Knysna loerie at Marloth…I have heard they have been spotted at Grootvadersbosch Nature Reserve about 40kms to the east.

The next day we were hoping to walk up Twaalfuurkop, along with ranger Adam Nel, who had kindly offered to accompany us. It’s a full day’s hike, following the steep path to the top of the peak at over 1400 metres. The views are apparently impressive, over the Overberg to the south, and into the Little Karoo to the north.

But an approaching cold front forced a change in plans. The rain wasn’t heavy, but a contumacious northwester wind picked up and blew a gale. When we looked up at the top of the mountain from our cottage, the clouds were flying across it’s summit, like those documentaries you see of Mount Everest when someone is just about to die. Okay, this is only Twaalfuurkop of course, but still, the wind looked hectic.

The gale didn’t let up. For two days it blew and blew – and blew. At night we hunkered down in our cottage, fire blazing in the corner, listening to the howling wind screeching outside. I did not want to be on top of a mountain right then…

Apparently Swellendam is one of the windier places in the country during winter, when westerly winds whip across the Agulhas Plain and get compressed against the steep Cape fold mountains. The wind farms in the Overberg are suitably positioned, clearly.

The next morning the wind let up just a little, and we certainly didn’t want to spend the day in the cottage, so we made for Die Plaat, which as the Afrikaans name suggests, is a plateau half way up the mountains, at about 600 metres.

After a relatively easy ascent via Doktersbos, the easy contour path winds its way through pristine fynbos, including a splendiferous and flirty purple species of Erica that shone luminous in the bright sun. (I must ask my blommetjie expert friends which species it is…)

Die Plaat’s path is circular, and takes you above the forests in the kloofs where we had walked the previous day. Along the way, the streams and rock pools make for good swimming, but we just dipped our toes in. The wind was icy!

That evening, the cold front arrived, along with more wind and rain. So we had no choice but to make maximum use of the fire place in Suikerbekkie cottage, while sipping on some Scottish single malt, and braaing lamb chops on the grill. (Sorry vegetarians).

I pulled a mattress from one of the bunk beds near to the glowing fireplace, put another log on the flames, and fell fast asleep to the sounds of rain on the roof.

Despite the weather, we saw enough of Marloth to want to return as soon as possible, and get to know these mountains more intimately. 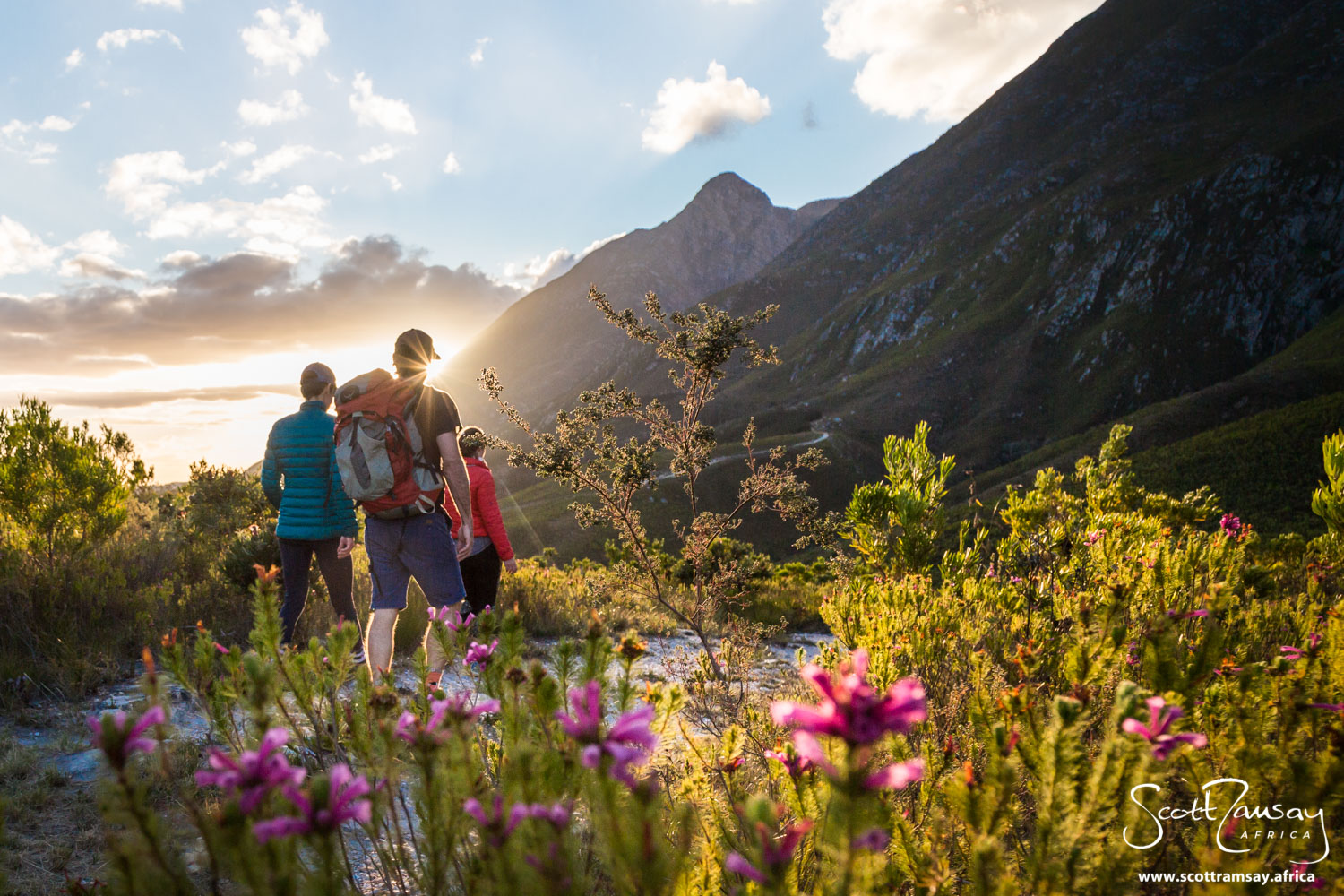 Marloth is known for it's rugged mountains and fynbos diversity. It's a place that you need several days to explore properly on foot, because there are no roads, only hiking paths. And watch out for the weather, which can change quickly. 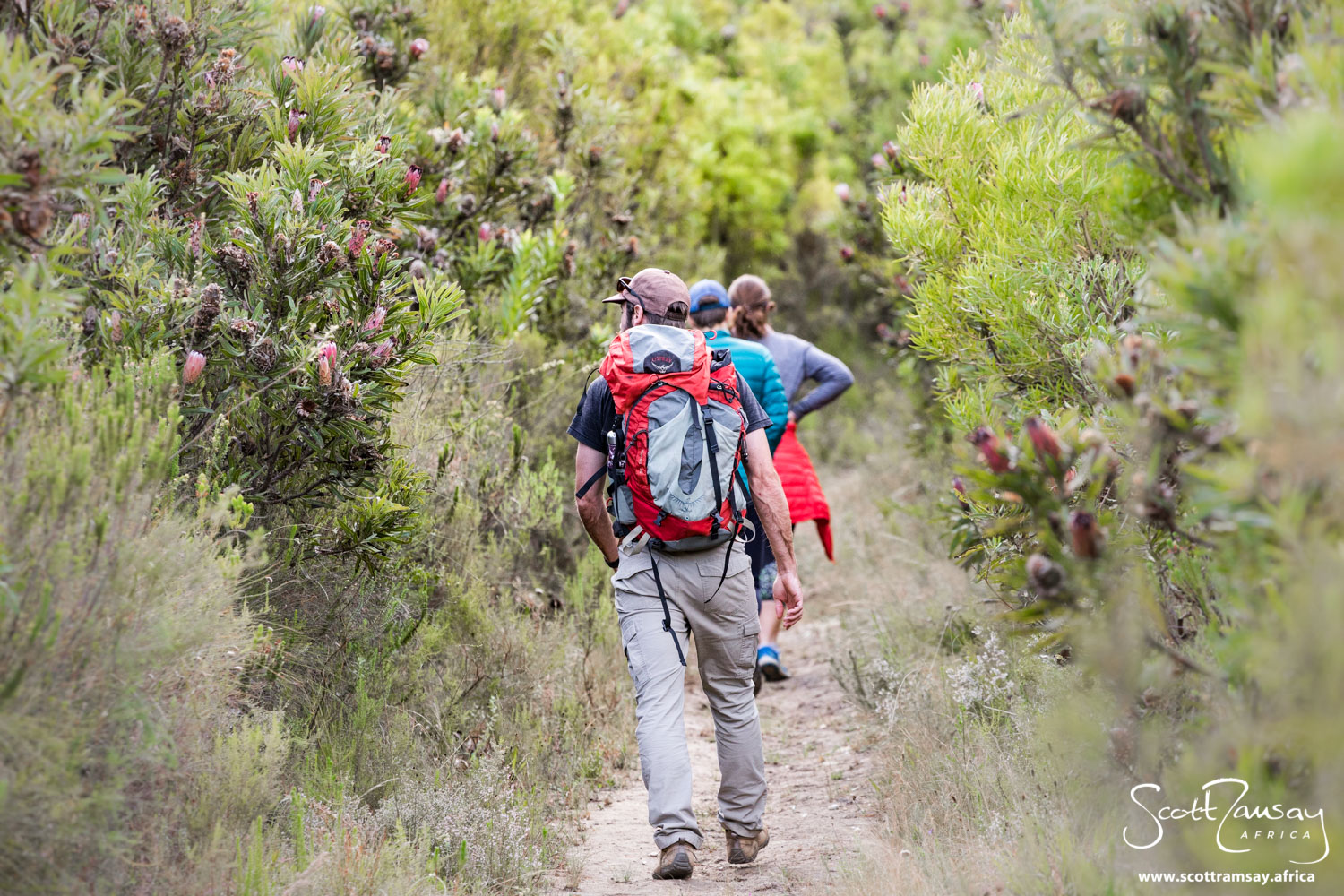 In places, the fynbos in Marloth is twice the height of a person. 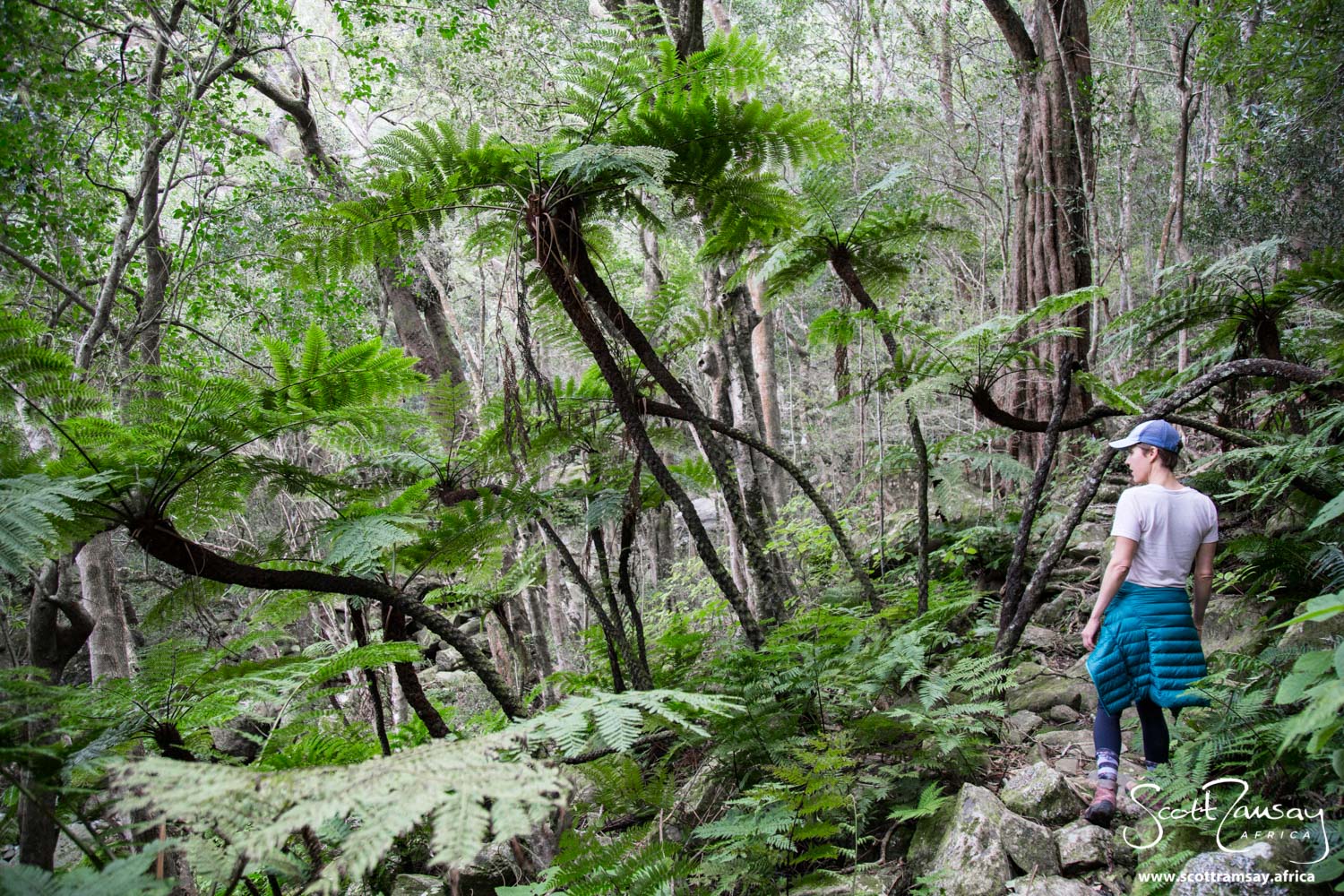 The indigenous forests of Marloth make for great day walks. The forests are relatively easy to get to from the main gate a few kms north of Swellendam 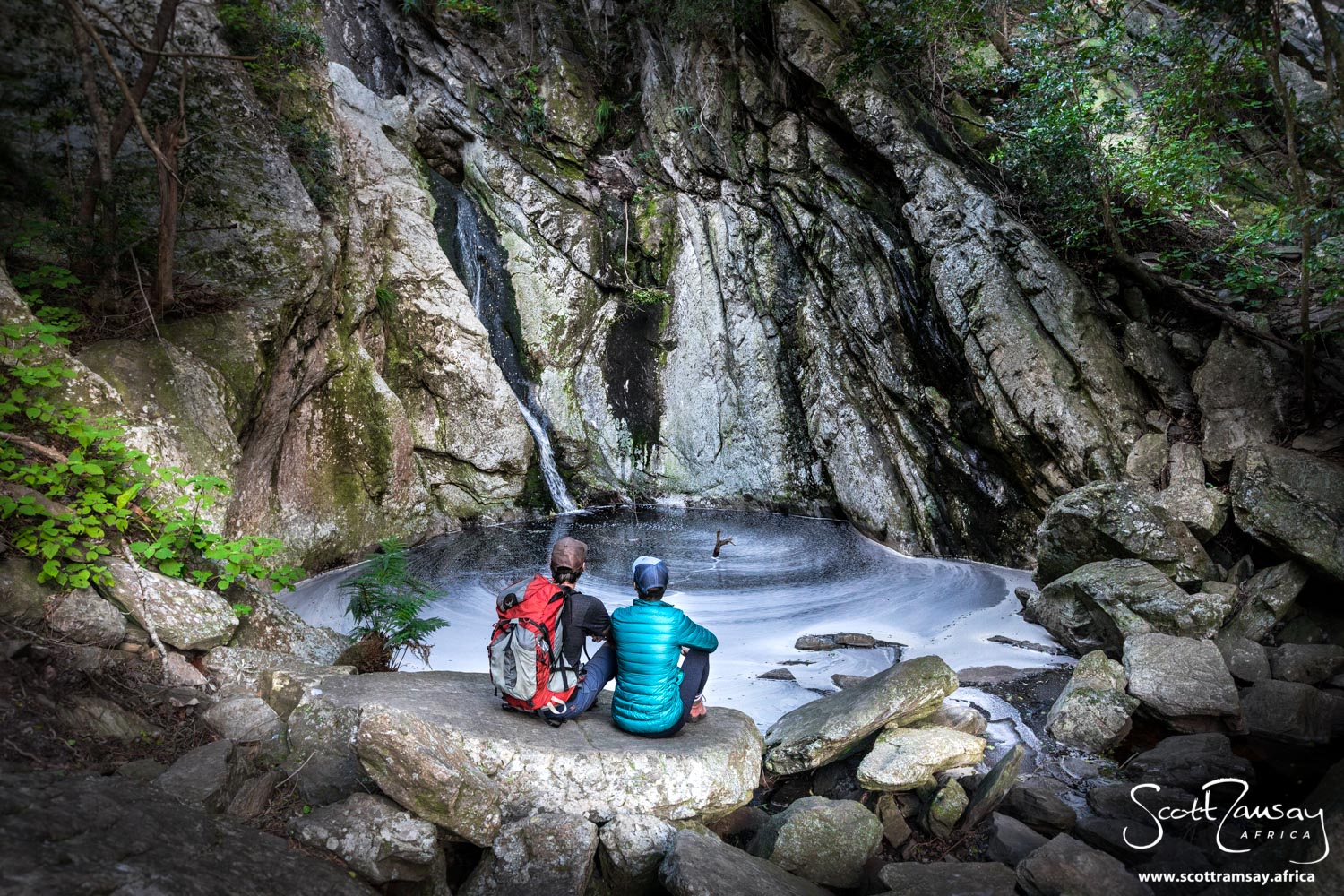 Tim and Hailey chilling next to one of the rock pools in Duiwelsbos, a patch of indigenous forest. 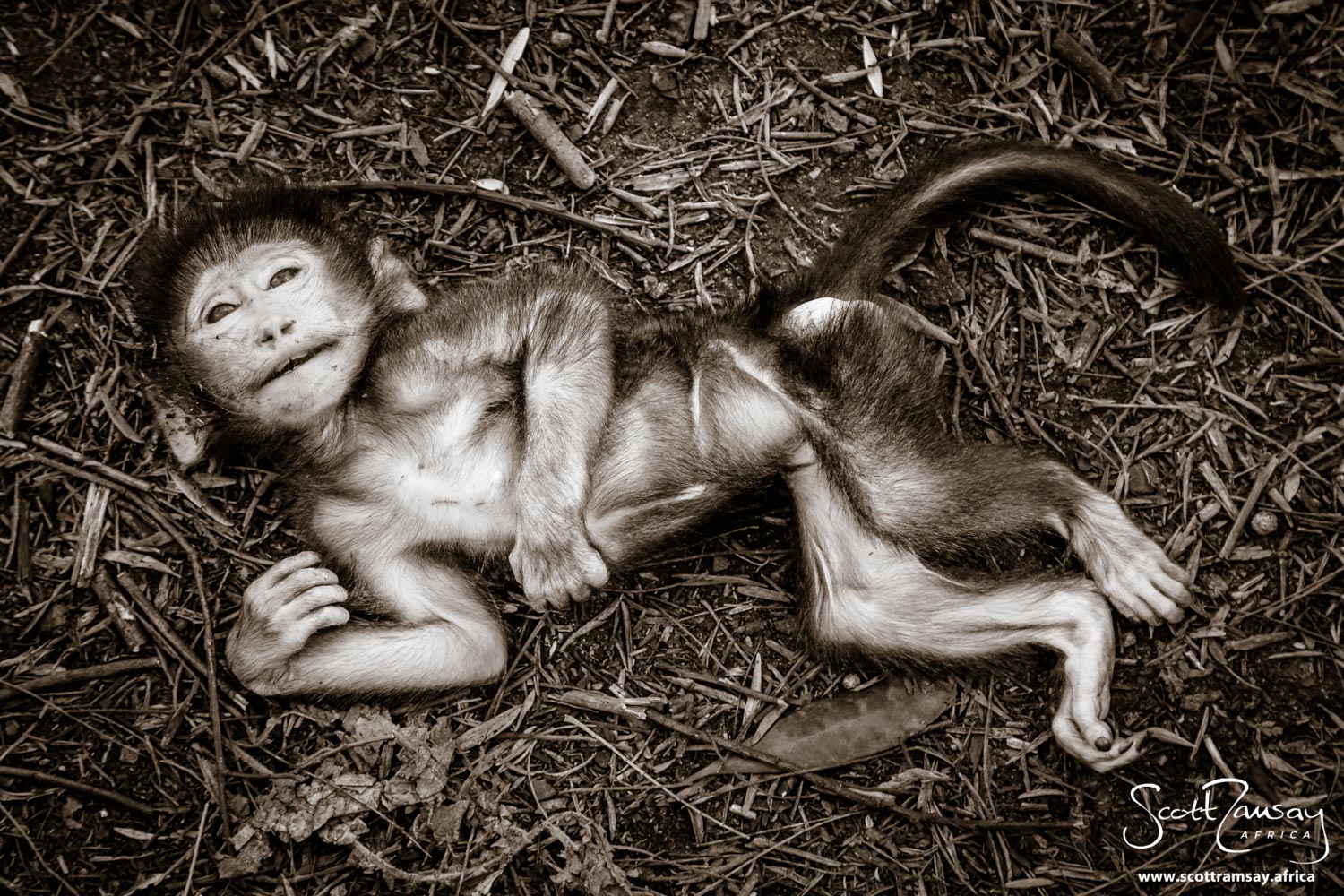 We came across this baby baboon that had most probably been killed in a skirmish with an older male. 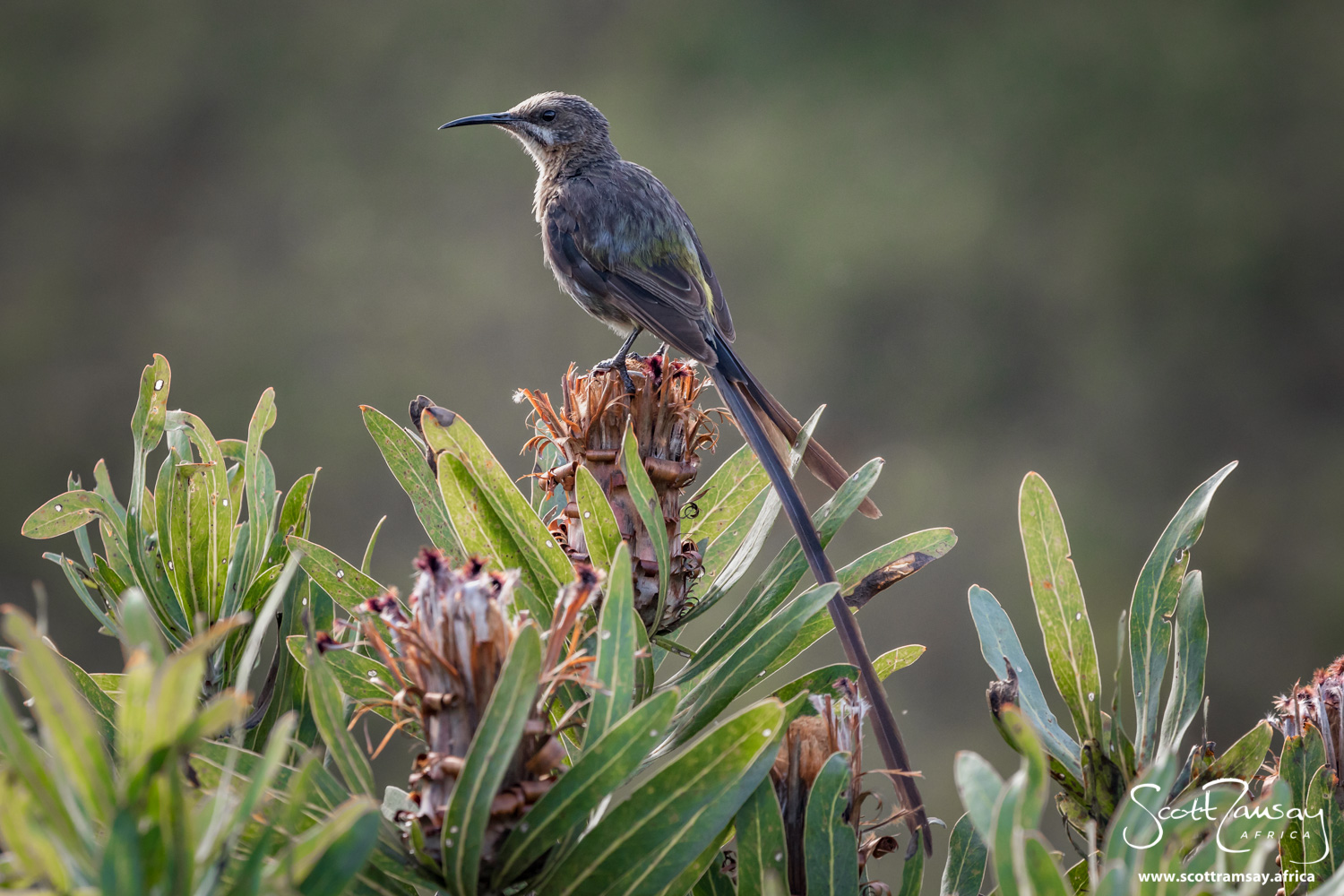 Sugarbird scoping out it's fynbos territory, and looking for some nectar. 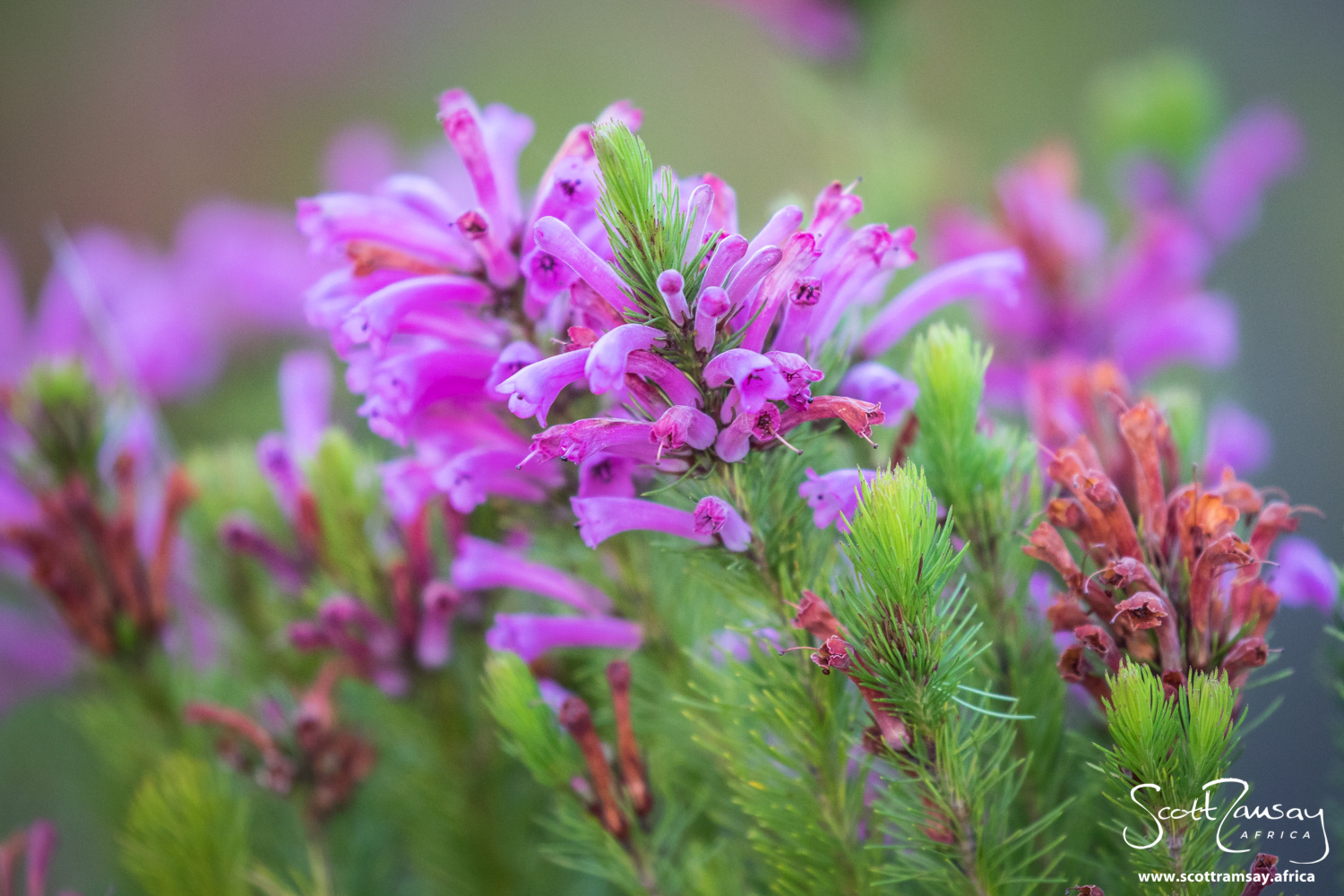 Flowering ericas. The fynbos in winter was looking gorgeous. 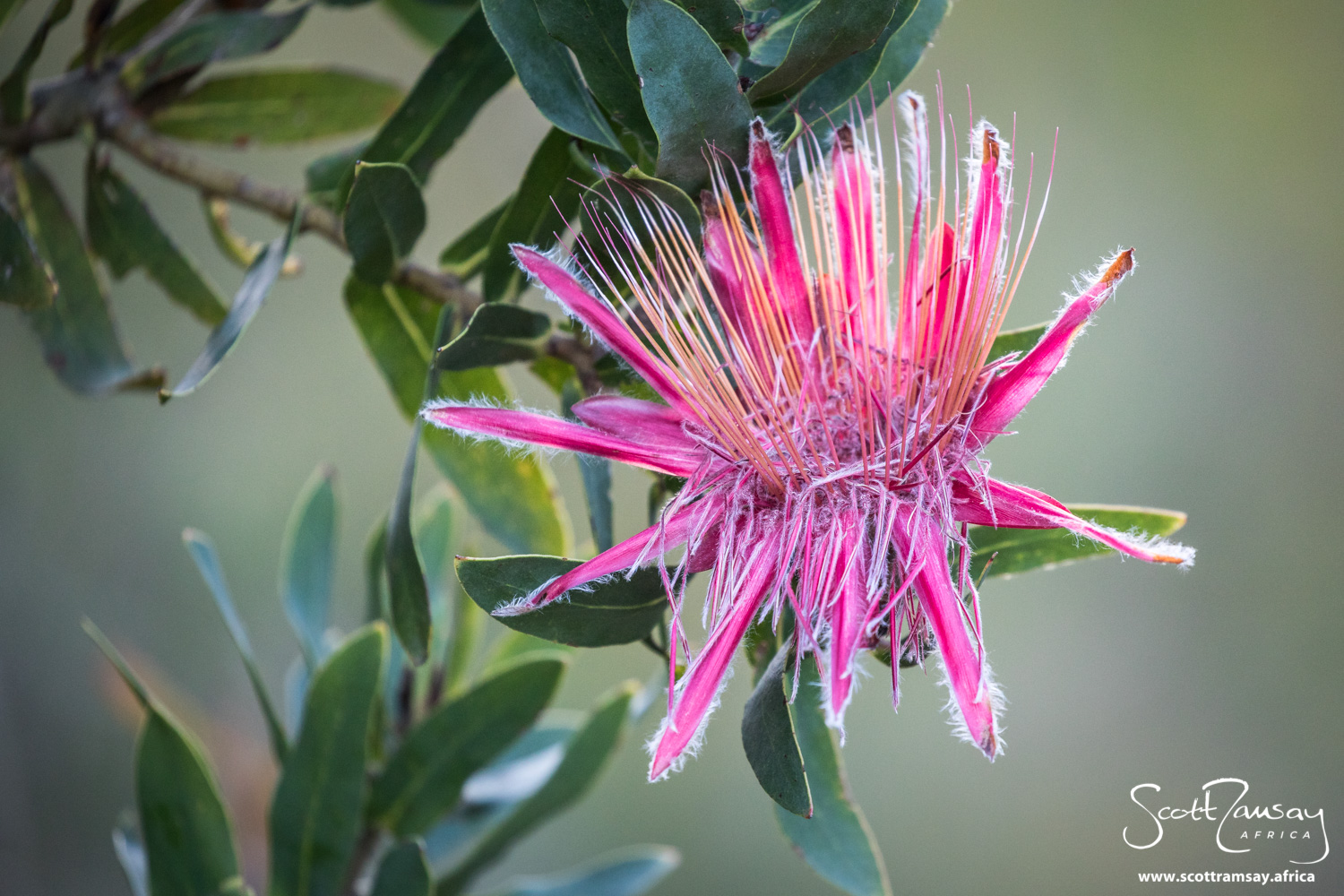 Protea species, an impossible hue of crimson and pink. 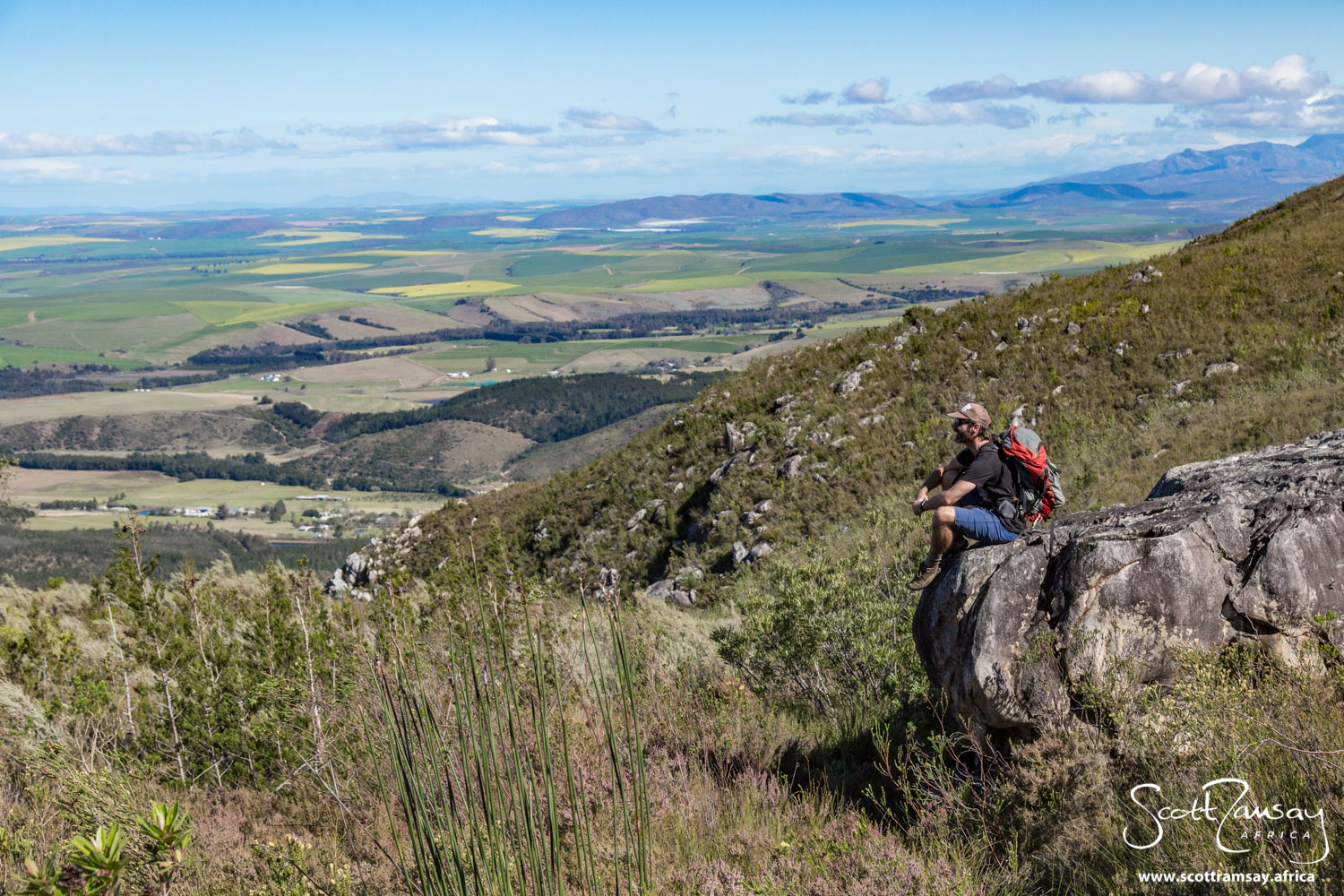 Tim looking out south over the Overberg, the farming region that lies around Swellendam, south of Marloth. 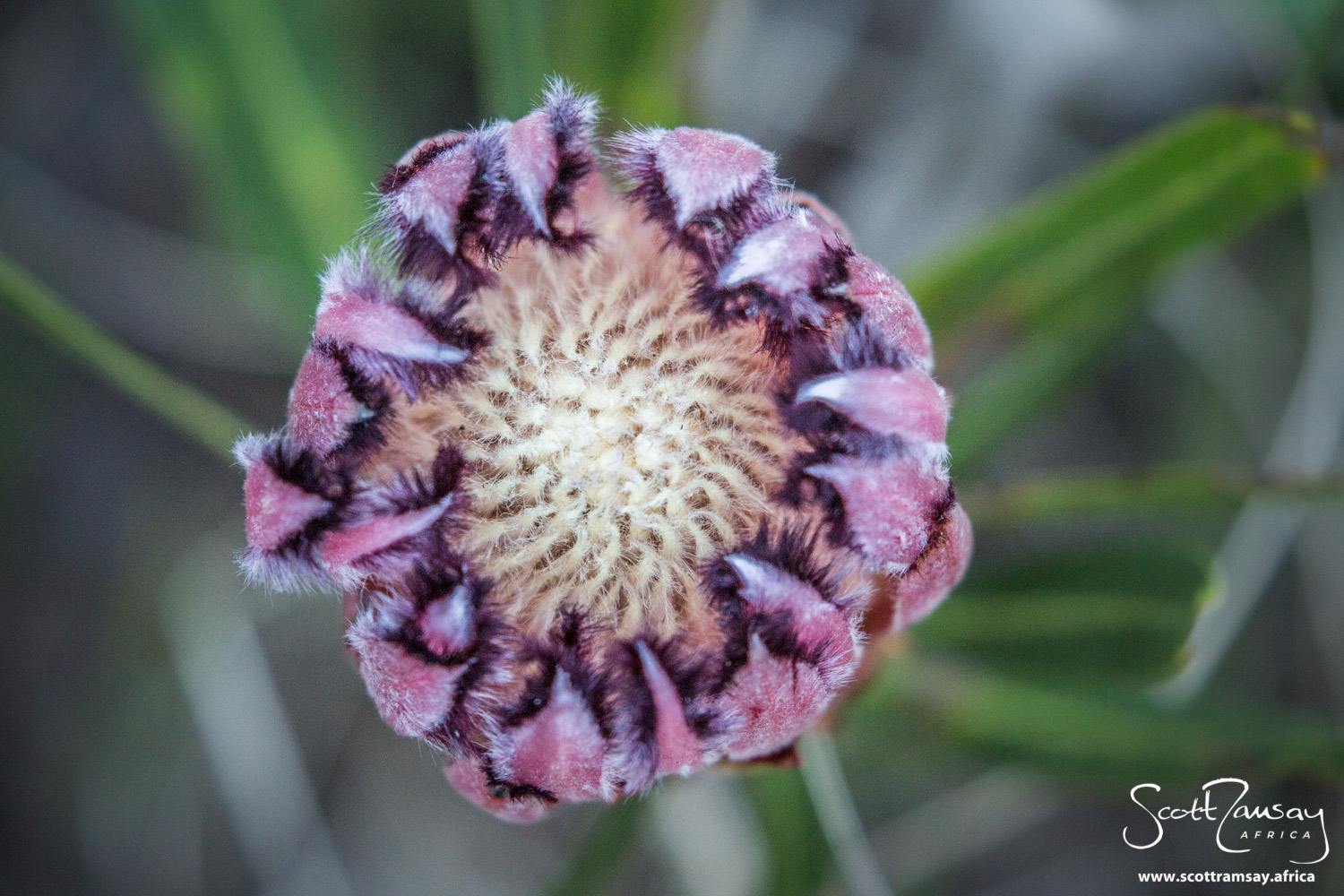 Can't get enough of the proteas during flowering season...