Most people will come to Matjiesriver in the Cederberg for the incredible rock paintings. Painted by Earth’s oldest race of homo sapiens, these mountains form one of the biggest outdoor galleries on the planet. Exploring the sandstone shelters of Matjiesrivier is a bit like walking through the Louvre in Paris – except you’re in the middle of a mountain wilderness that also happens to be one of the most ecologically diverse places on Earth – and one of the most beautiful. 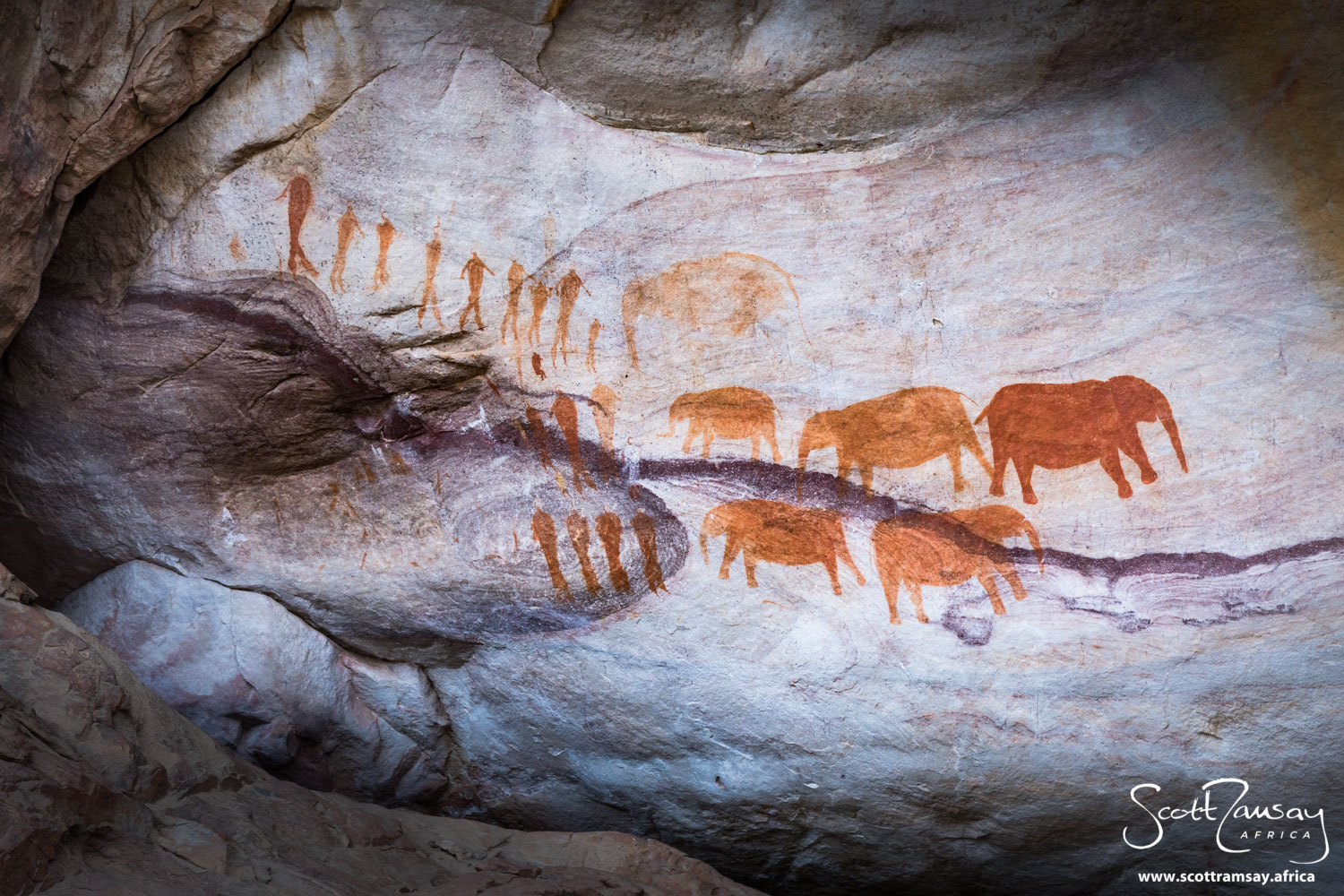 These paintings of elephants and humans at Stadsaal Cave in Matjiesrivier are among the most impressive, and accessible in the Cederberg mountains.

Despite being managed as a separate CapeNature reserve, Matjiesrivier is for all intents and purposes part of the Cederberg. So don’t get too confused. If you approach the Cederberg from the eastern side, following the gravel road from the hamlet of Op Die Berg, you will find yourself passing through Matjiesrivier.

This smaller, 130 square kilometer reserve is part of the fynbos World Heritage Site (which also encompasses most of the Cape fold mountains, including the Cederberg). It’s considered special among botanists because it’s where the fynbos biome meets the more arid succulent Karoo biome.

The Cape Floral Kingdom, of which fynbos is the dominant member, has about 9 000 thousand species of plants, many of them endemic (ie. found only here and nowhere else). The succulent Karoo biome doesn’t have as many species, but it’s level of endemism is similarly high. From purely a botanical perspective, the Cederberg – and Matjiesrivier – pack a serious ecological punch.

Yet most people will come to Matjiesriver not for the blommetjies, but for the incredible rock paintings.

Let’s back up a bit, and mention that Southern Africa as a whole is perhaps the greatest repository of rock paintings on Earth. We’re talking hundreds of thousands of paintings, perhaps millions, dating from about 150 years ago in the Drakensberg to 25 000 years ago in what is today southern Namibia at Apollo 11 cave in the arid Richtersveld region.

Painted by the Earth’s oldest race of homo sapiens (Bushmen or San, depending on which expert you talk to), these paintings are considered to form the greatest outdoor gallery on the planet.

There are three main focal points for rock paintings in South Africa. The Drakensberg, the Eastern Cape mountains, and the Cederberg.

Of these three, the Cederberg is considered to have the most paintings. Seen in this way, the Cederberg (of which Matjiesrivier is part) is perhaps one of the main centres of rock paintings not only in the country, but perhaps in the world.

Walking around the Cederberg, and Matjiesrivier, is a bit like walking through the Louvre in Paris – except you’re in the middle of a mountain wilderness that also happens to be one of the most ecologically diverse places on Earth – and one of the most beautiful.

And the people who painted on these sandstone rock faces were part of the original group of modern humans that survived in the Cape for the past 200 000 years, possibly longer.

In effect, when you look at the rock paintings in Southern Africa – and in the Cederberg – you’re coming face to face with the imaginations and artistic expressions of your ancestors. In some ways, coming to Matjiesrivier is like stepping into a time machine, where you can meet your ancient family…for this reason alone, these mountains are incredibly special.

Matjiesrivier is the reserve that protects two significant rock art sites. The Stadsaal Caves and Truitjieskraal. The former is a few kilometres from Dwarsrivier. Make sure you get a permit from the Cape Nature offices (or from Dwarsrivier), along with the code for the gate lock.

The caves themselves are really just big walk-throughs of sandstone, and are great to explore. But the best rock paintings are actually in a sandstone shelter a few hundred metres before the caves, on the right of the sandy jeep track. You can’t miss them.

Here there are several elephants and people painted alongside each other. Estimated to be about 5 000 years old, experts tend to emphasise that these types of paintings are not literal, but figurative.

Of course, we will never know the full meaning of the paintings, because there aren’t any Bushmen painters alive today, and besides, the paintings were made millennia ago…it’s a bit like asking modern-day Egyptians to decipher the meaning of symbols found inside the pyramids.

There’s a set of informative panels at the Stadsaal rock art site which suggests ideas for what the paintings may mean…I’ll leave you to visit the site and discover it for yourself.

Interestingly, the animal most commonly painted large animal in the Cederberg is the elephant, suggesting there may have once been great numbers of these animals in the region.

From colonial written records, we know that elephants were still surviving in the Olifants River valley in the 1700s (hence the name Olifants), before they were shot out by hunters. No doubt Earth’s largest land animal held much appeal to the Bushmen who lived side by side with elephants for millennia.

In the Drakensberg, interestingly, the eland is the most commonly painted animal, suggesting that this huge antelope was held in similar reverence by the Bushmen in that region.

The other excellent rock art site that is open to the public in Matjiesrivier is Truitjieskraal, which is accessed via Kromrivier (where you must get a permit and gate lock code).

The rock paintings themselves at Truitjieskraal are also well-explained by information boards, and although the paintings are not immediately as impactful as those at Stadsaal, the rock formations draw you in to a magical world of nooks and crannies which multiplies the mysterious aura.

There are several half-human, half-animal figurines on the main sandstone overhang at Truitjieskraal, a common theme among South African rock paintings.

During a healing trance dance, shamans would sometimes experience themselves as being part-animal. Perhaps the shamans painted their experiences on the sandstone walls afterwards.

People who have used psychedelics like magic mushrooms or LSD have also experienced similar visions that have sometimes proved psychologically transformative. The intense healing experience of accessing the unconscious mind perhaps inspired the Bushmen shamans to try document or record what was quite possibly a deeply moving experience.

Both Stadsaal and Truitjieskraal are must-visit sites for anyone vaguely concerned or interested in South African history and human history – indeed, your own personal history too.

I highly recommend a visit to both. Give yourself a full day, visiting one in the morning and the other in the afternoon, so you have time to not only view the rock paintings, but also to explore the labyrinthine landscape. 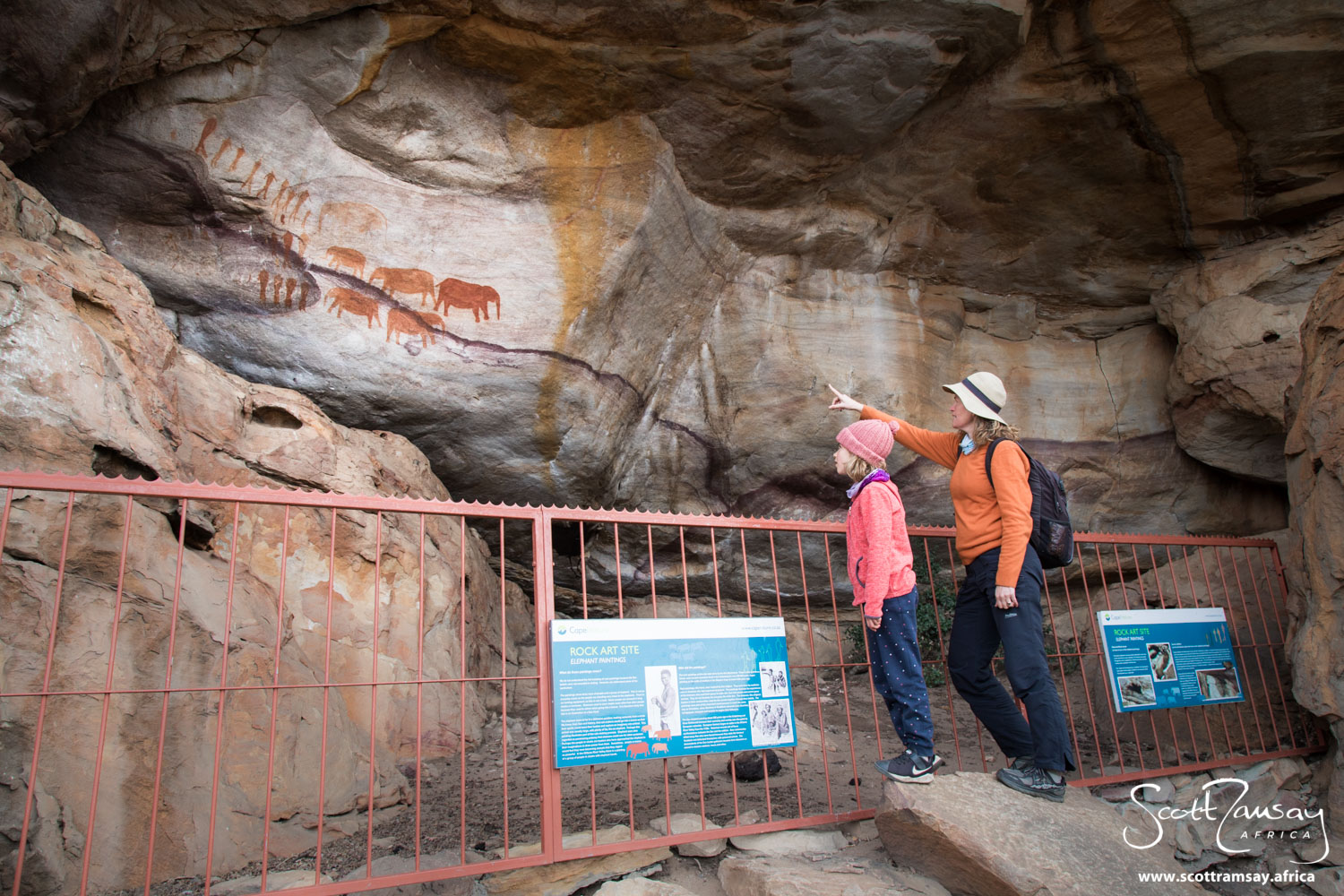 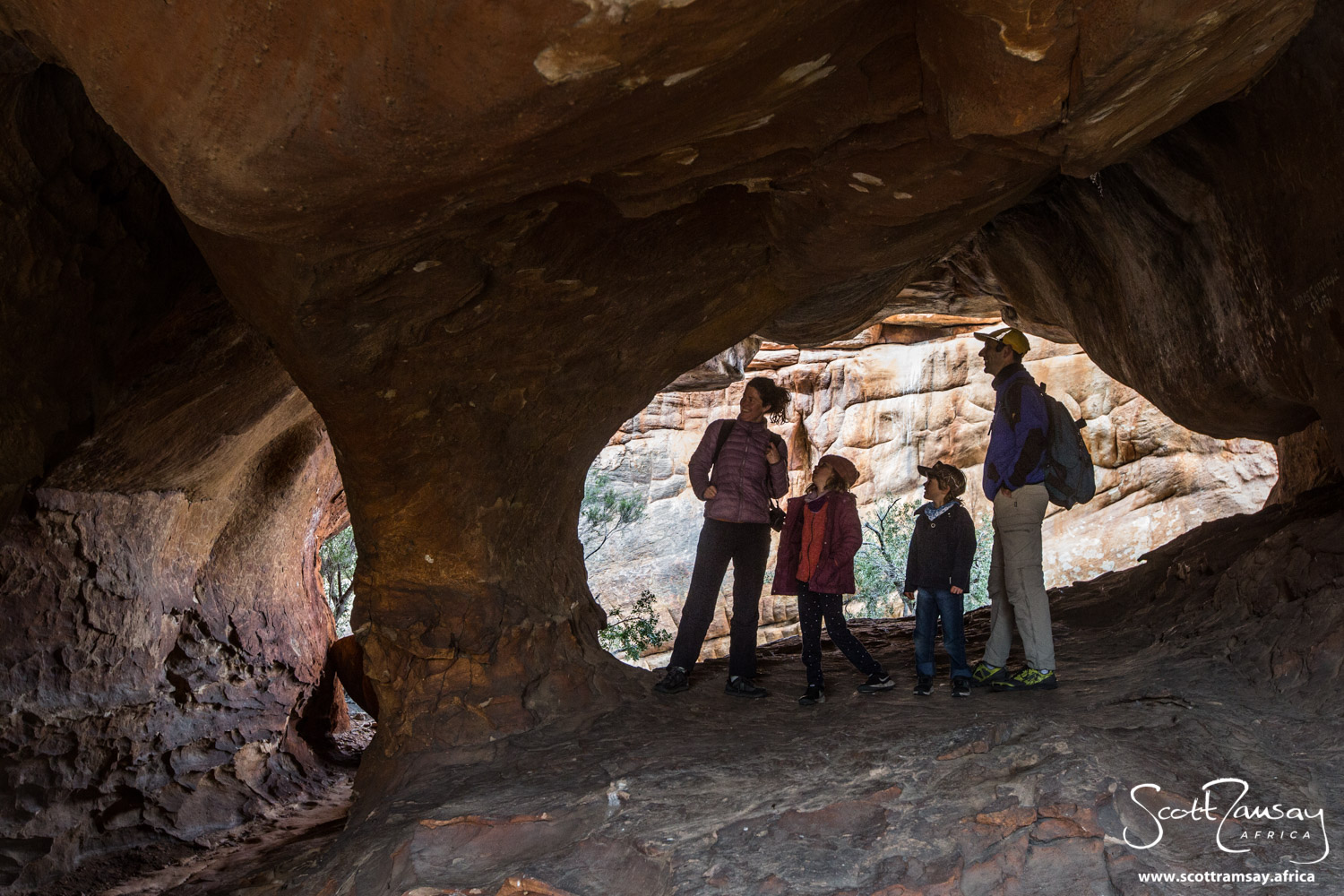 The Stadsaal Caves in Matjiesrivier 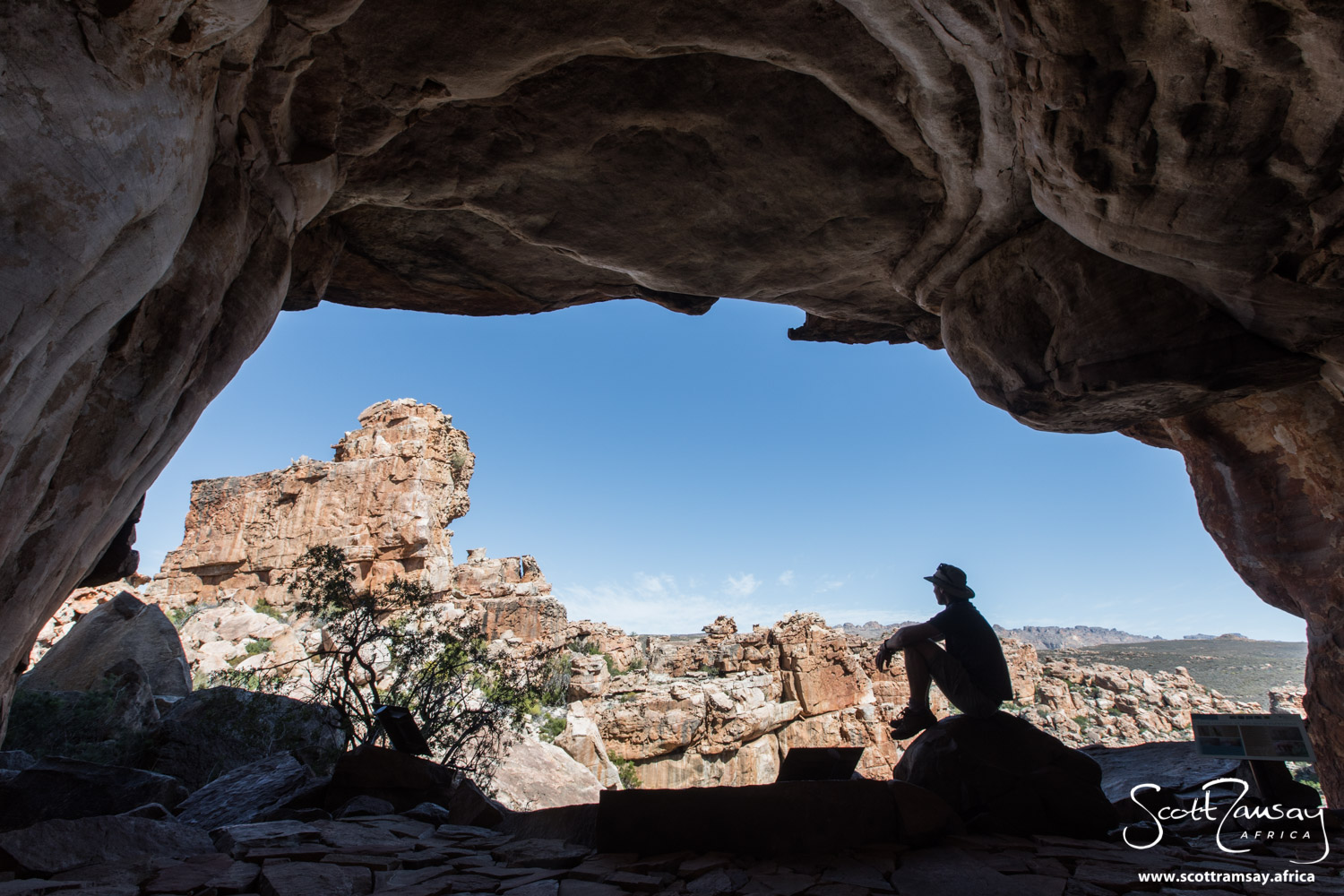 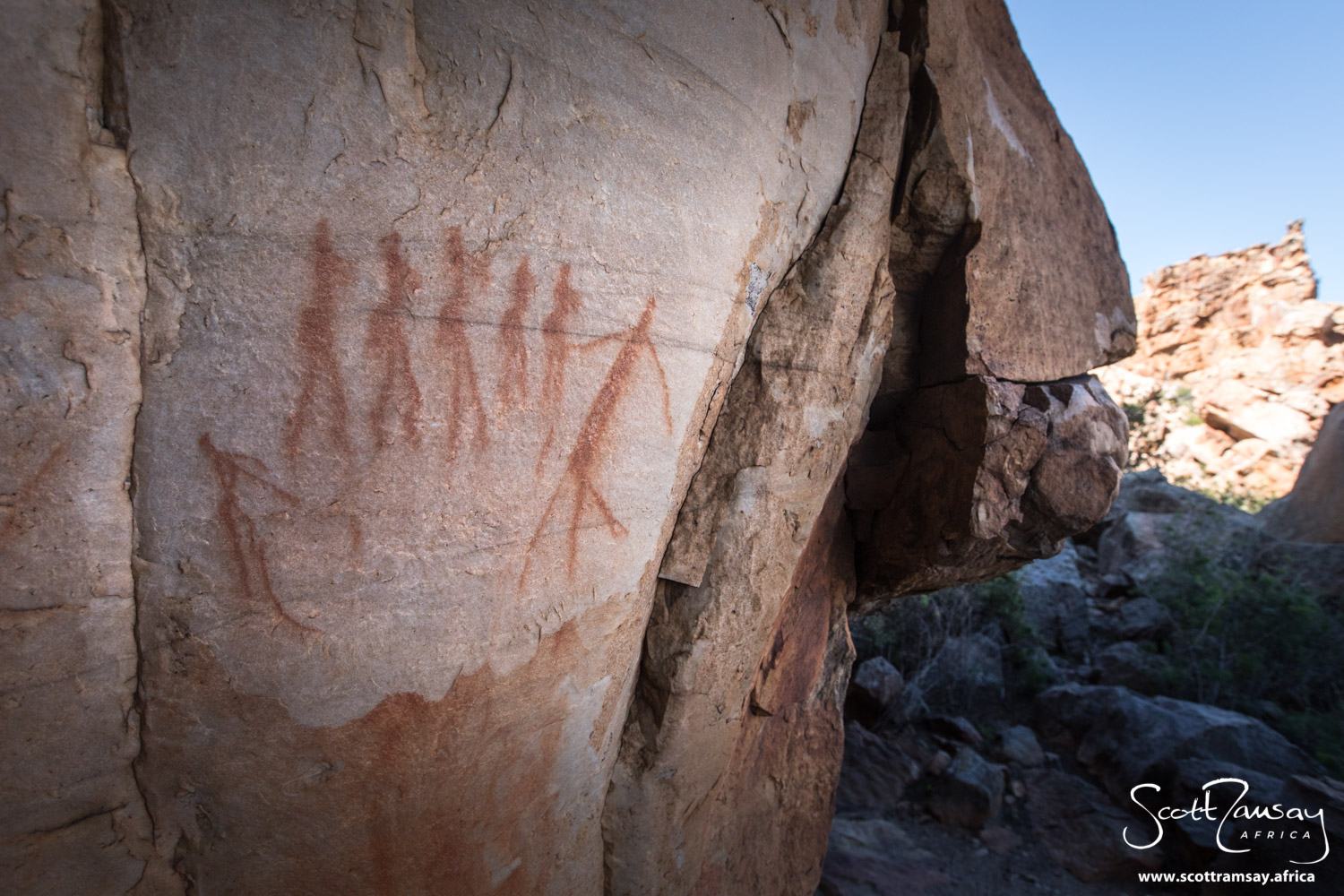